Years ago I get a Fly Car Model Porsche 908/2 quite used to decorate it. It was the Fly's first car that I tried to decorate and I followed the same process as with Scalextric Altaya slot cars, disassemble it completely and submerge it in alcohol to remove all the paint. As I saw that the painting did not leave I left the body submerged in alcohol for one night ... Tremendous error, because the body weakened and deformed, the body post receivers broke, the surface cracked and widened... the result: an unusable body.

The decoration I wanted to make to the car was the classic Repsol Team, with the original logos of the Spanish oil company over a completely white car, but after the disaster with the body, I only developed the set of decals and left the project parked.

Time passed, but I continued with the intention of making that decoration. When I saw a Fly Car Model Porsche 908/2 assembly kit (reference 88311) in the store where I used to buy, with its white body completely disassembled I did not think twice and I get it. As you can imagine, the decoration of the car was decided years before: The Repsol team.

The decoration process was quite simple, and roughly limited to:

The cars of the Repsol team were white with a red and blue longitudinal stripes, the oil company logos and little more. I took the license to paint the slor car gray metallic because I really like the color and I like how the decals printed on transparent paper look over the gray metallic background. However, for a few years now, the Repsol Classic team has painted its cars in the same way: the classic Repsol team decoration on gray metallic cars.

In the following images I show how the body was painted, decorated with decals, and varnished. 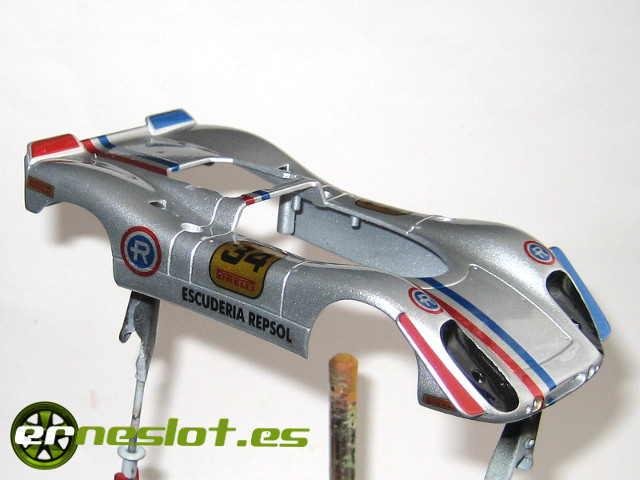 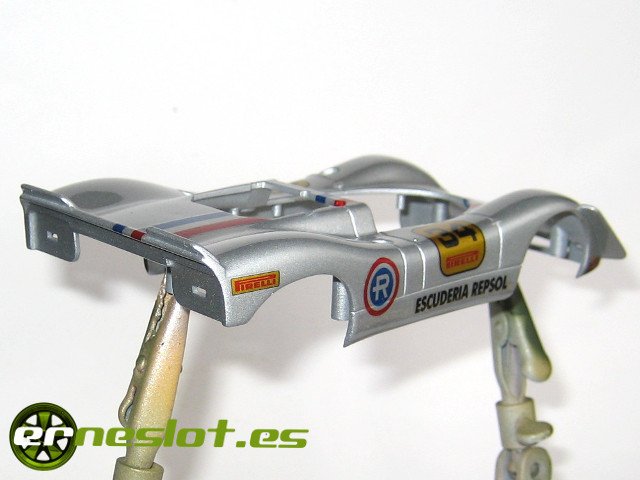 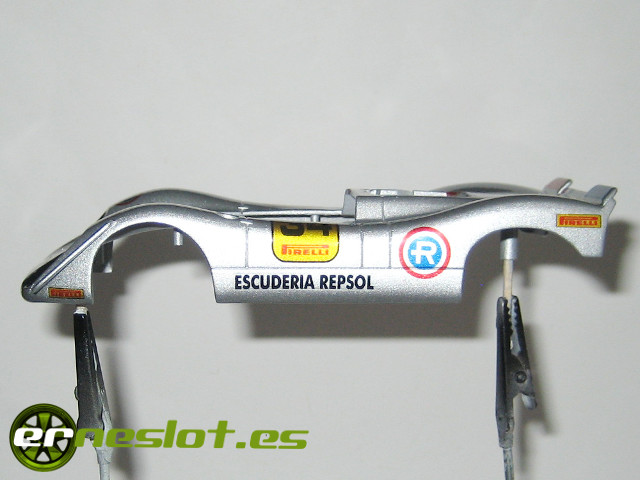 With the decoration of the interior of the car I entertained a little more, with the intention of giving a little bit of life to a rather simple car, painting the cabin of metallized gray, and with a somewhat darker steel gray (obtained after mixing gray X- 11 with black X-1 of Tamiya) for the engine zone. A touch of color for the air filters covers and driver´s helmet (with Humbrol enamels) and a red-painted fire extinguisher to which I attached two thin strips of aluminum tape to simulate the clamps. The driver painted with Humbrol enamel as I have done several times before, and the seats are painted matt red from Tamiya (reference XF-7) applied with the brush, which gives them a very real appearance. 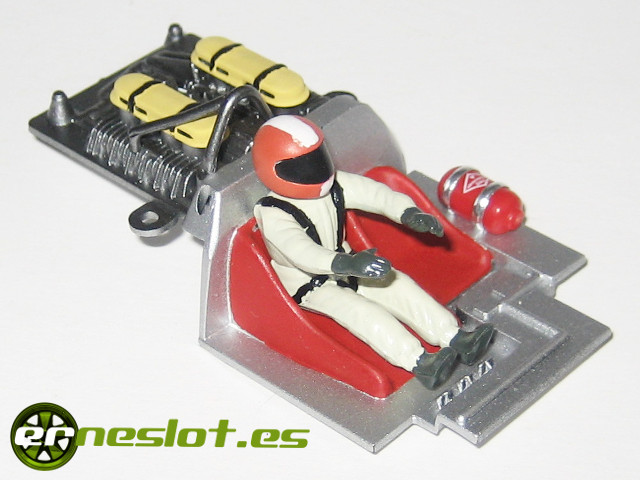 The rest of the components of the body were painted in brilliant white (reference X-2 of Tamiya), for mirrors and caps, and steel gray color of the above-mentioned mixture, as in the case of the anti-roll bar. I chose the white color for the caos and mirrors to differentiate them from the body, since if I had painted them metallic gray as I usually do, they would not have differed from the body. I also applied a coat of automotive varnish to these items for better protection. 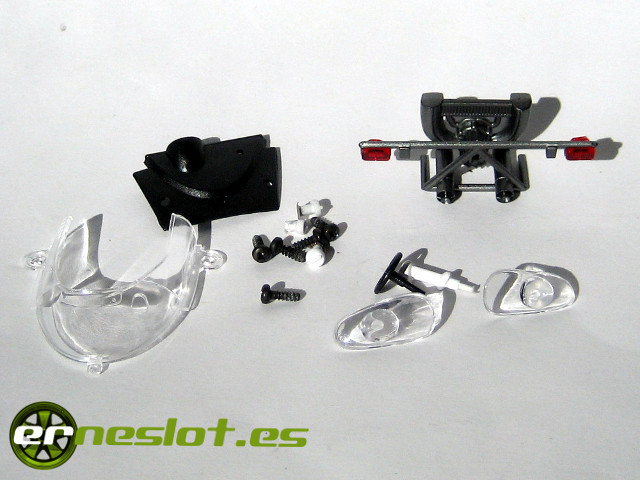 And with all the components painted, varnished and dry, I mounted them on the body, and coupled to the original mechanics of the kit, without any modification, achieving this result: 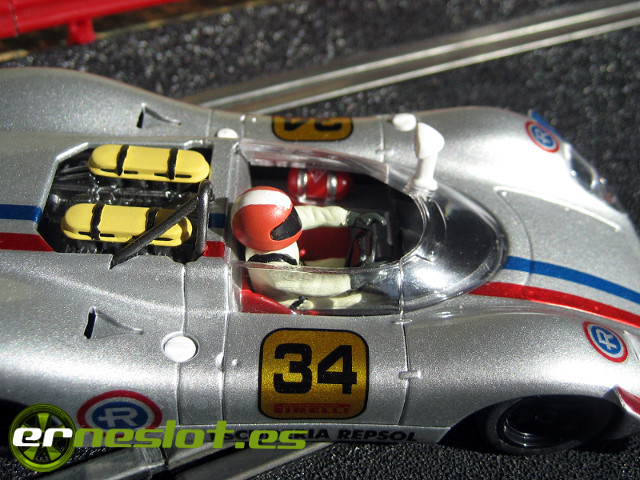 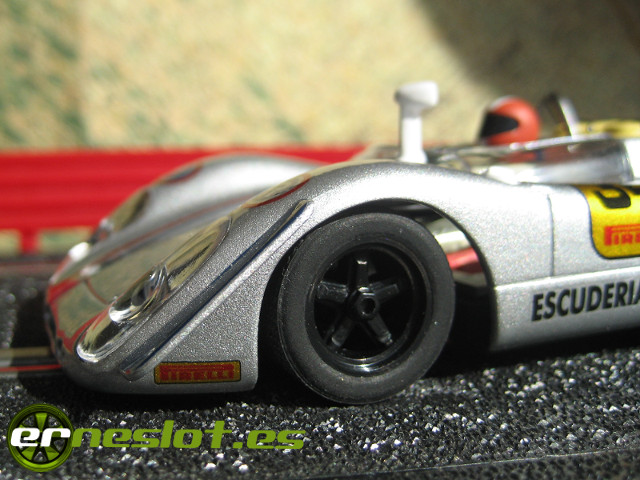 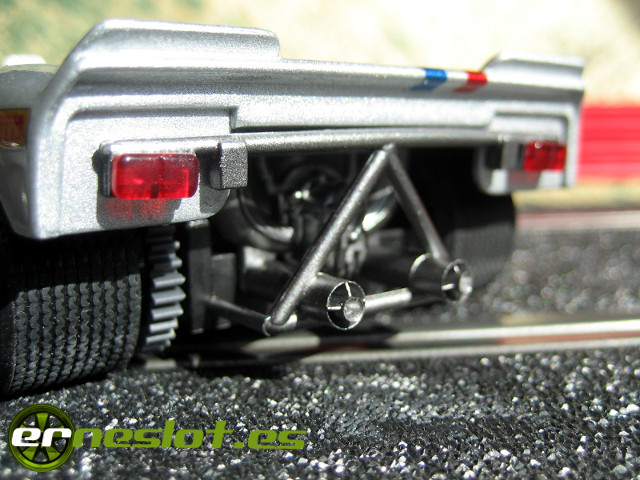 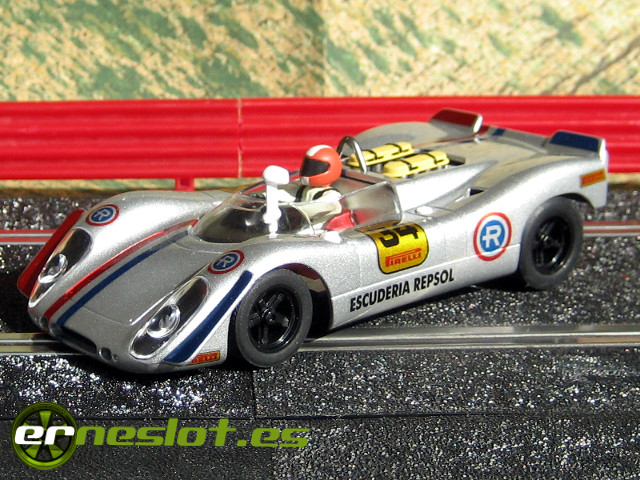 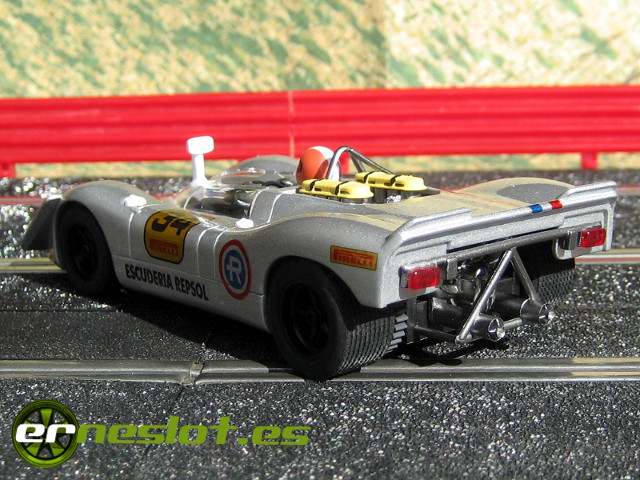 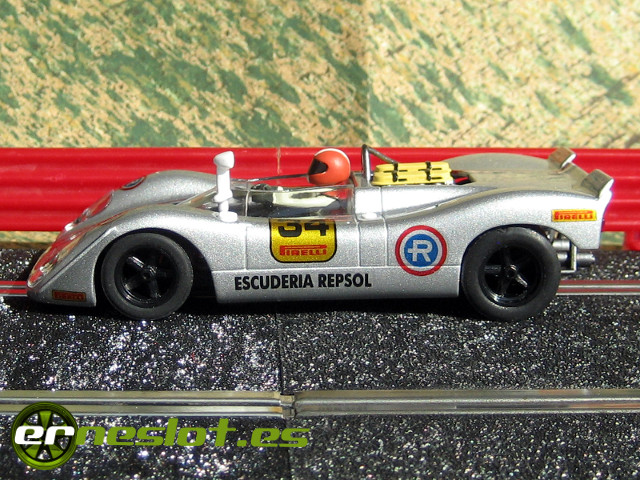 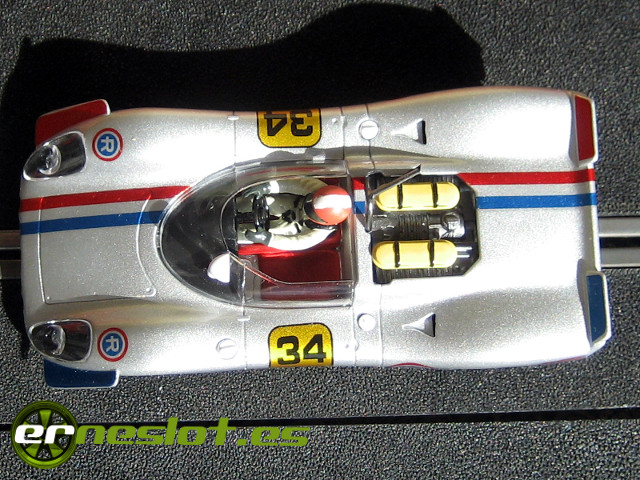 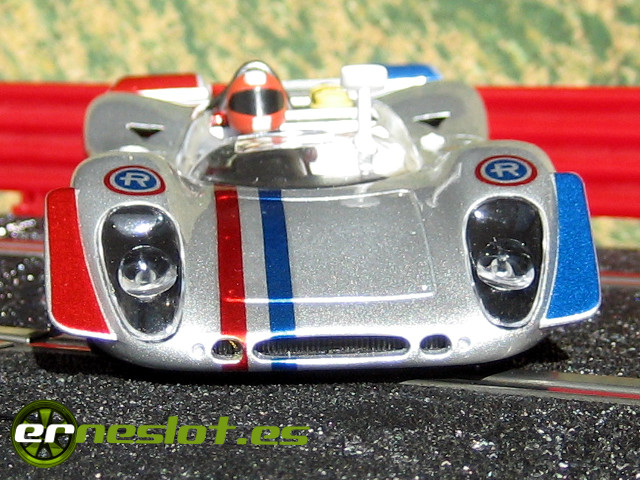 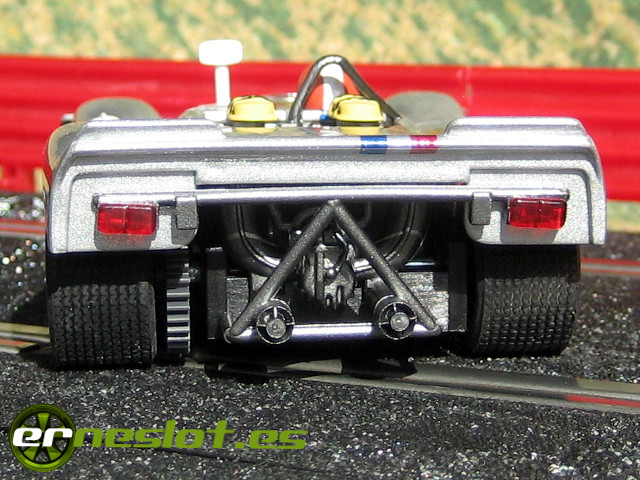 Basically, this is the result that I wanted to get when I destroyed the body of that 908 years ago. I like to finish the works that I start, and although in this case it can not be said that I would have started the work if it was a project that I wanted to carry out, and I got it.

After fitting the Avant Slot Renault Alpine A310 chassis to a Sloter Lola T290 body that you can see in this linkz, it had the body of the car with a coat of Dupli Color gray primer prepared to decorate it. At that time I was busy with the decoration of the 908/2 Repsol team and I thought why not make two cars with the same decoration as if they were two cars of the same team? I had the decals developed in the computer, so I just had to make a different numbers, and slightly modify some decals, such as the longitudinal stripes, to fit the different dimensions of the Lola T290 body. So it was. I changed the car number from 34 to 35 and made small modifications on the other decals, while the rest of the logos left them as is. The process of painting the car (with Tamiya X-11 acrylic paint applied with airbrush), placement of decals, car decoration and subsequent varnished is well known and is exactly the same as I followed with the Porsche 908/2, and the result Was as follows. 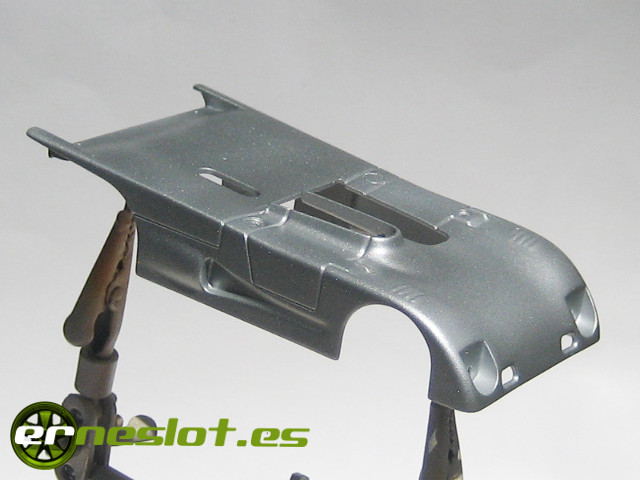 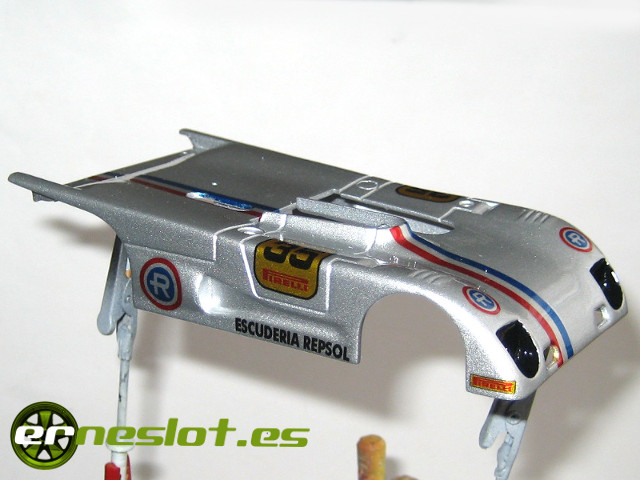 As in the case of the 908, I painted white body elements (caps and mirrors), exhaust pipes and other engine elements with the steel gray color achieved after the mixture of colors I spoke with the 908. Inside I left it as it was, a simple lexan tray with the helmet of the driver, which was casually decorated with the colors red and blue, so fit perfectly in the decoration.

After assembling the elements of the body and screwing it to the chassis, the car looked like this: 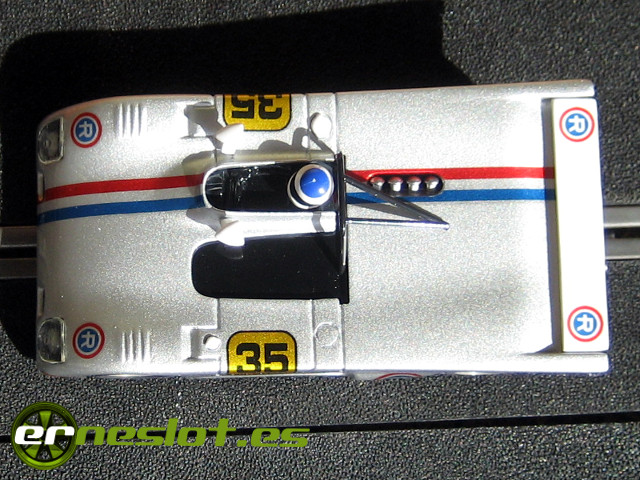 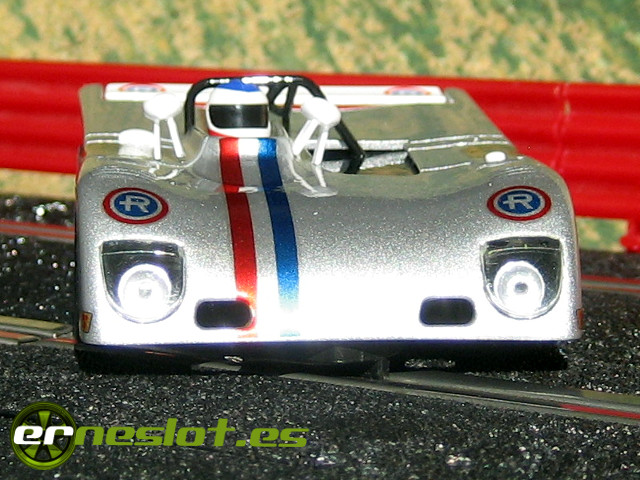 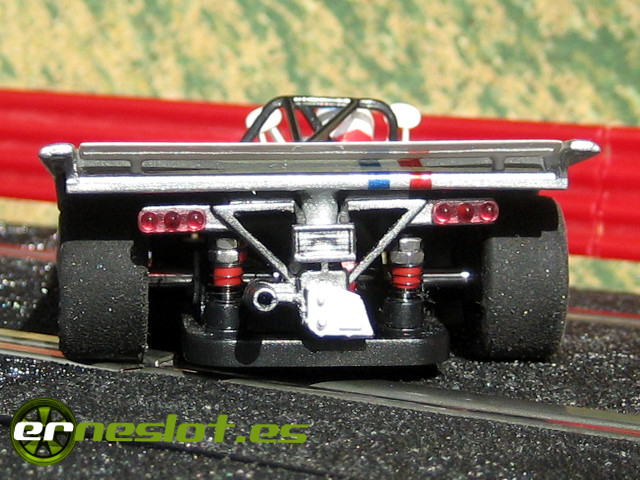 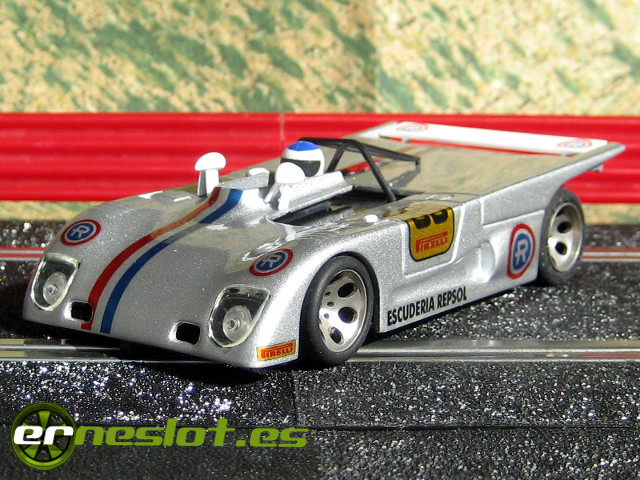 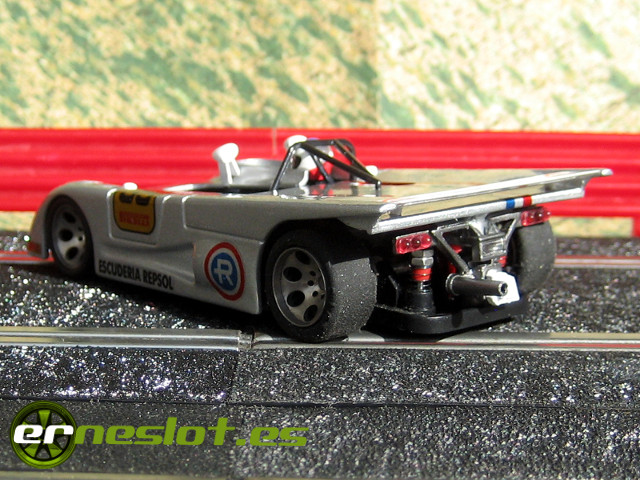 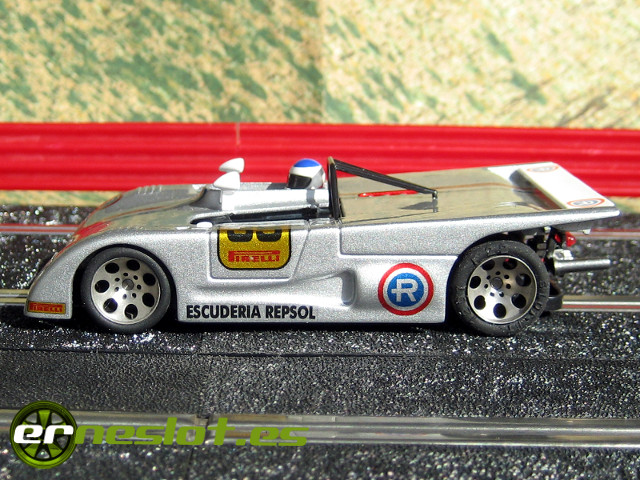 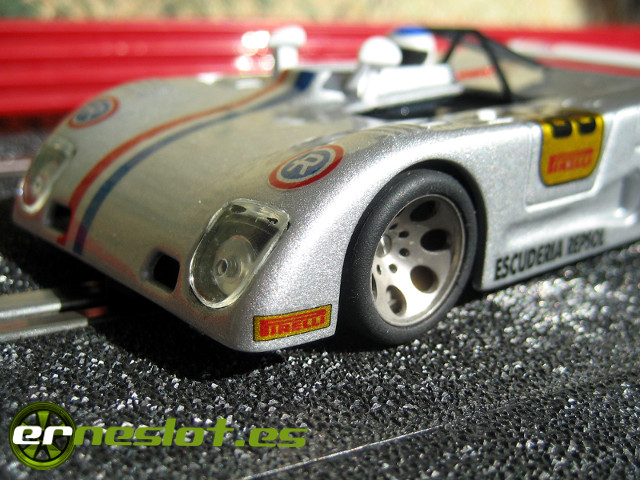 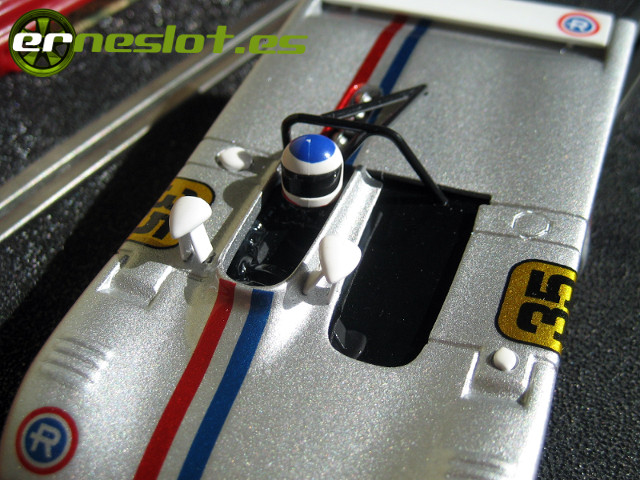 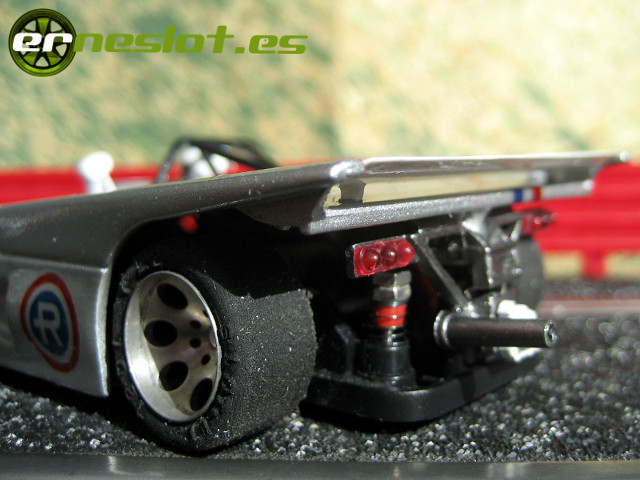 I had saved a cardboard box where the Ferrari 365 GTB/4 came (the one I use for Maranello Concesionaries decoration) I decided to place the two cars as a Fly Car Model limited edition. 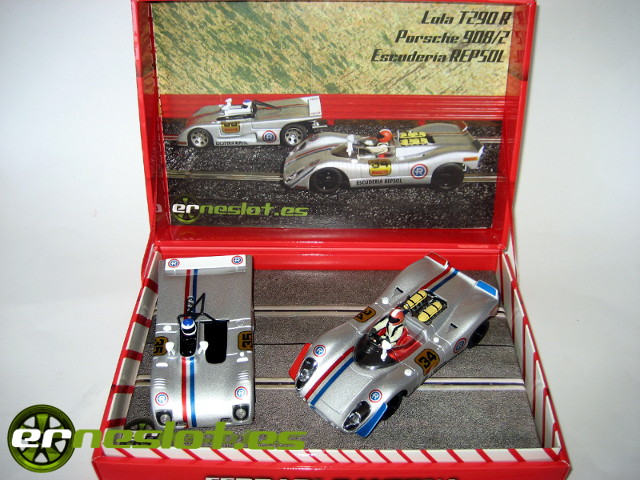 Sometimes jobs arise without thinking too much, start a car or a decoration and that work leads to another, another car appears to do another job and suddenly another project arises, this is a clear example. From the union of the Porsche 908/2 decoration project, and the Lola T290 body chassis fitting project, a set of two cars from the same "team" has emerged, one oriented to the competition, the Lola, the other to the display case, the Porsche. In addition, we reuse material that we have stored in the drawers, give a second life to a unattended car, finish a project started years ago and enjoyed the process. Can we ask for more?