The Porsche 911 GT1 98 was the car that took Porsche to the top of the podium in the 1998 Le Mans 24 hours, just the same day the manufacturer celebrated its 50th anniversary. The car was developed completely from the start thanks to the regulatory change of the FIA-GT championship in the year 1998 and not as evolution of the previous 911 GT1 and GT1 EVO although taking elements of the series cars, like the headlights of the 911 of the 996 series. The Mercedes-Benz CLK GTR and the Toyota GT-One were faster cars, but to win a race you must finish it first, and in Le Mans this becomes much more evident.

This is an image of the winning car of the 1998 edition of Le Mans at the Porsche Museum taken from the internet. 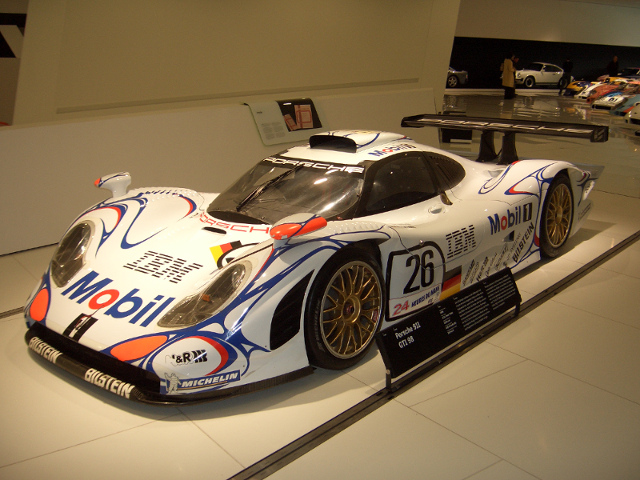 Spanish slot car manufacturer Fly Car Model sold the 911 GT1-98 on 1/32 scale for slot tracks in various decorations, including the winner of Le Mans in 1998, among others. It also released versions of the car in its "Fly Racing" series, with lightened interiors and calibrated material, which greatly increased the performance on track compared to the standard version. At the time (mid-2000s) the car was very competitive and over the years had several evolutions, mainly in the chassis that improved their performances on track but staying away to other models in its category from other manufacturers as Avant Slot, Slot.it or NSR, for example, that had a different and much more advanced chassis concept.

From that time I kept some parts of the car, chassis, axles, tires and as I like to give a second life to used cars, I decided to do a bodywork to test some techniques, especially masking and painting tests, and take advantage of scrapyard pieces to complete the car and to lighten the box of spare parts.
Coming from a change I got a body of the Fly Racing version, which included a lexan interior to reduce weight to the body and which were missing some pieces, but nothing important because as I said in the drawer had a variety of pieces of this car. This is the body as I received it: 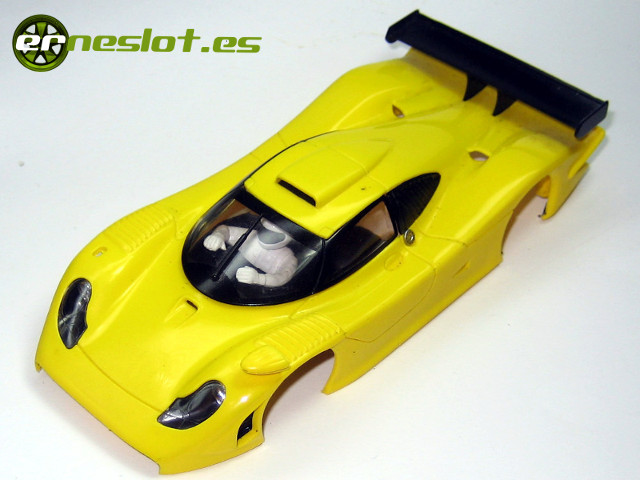 It lacked a rear-view mirror and the rear part that simulates the engine but was in good condition, with its simple Lexan interior. Before I put on the body, I mounted the mechanics of the car in a chassis that I had stored. New front and rear Fly axes in their bags, a Sloting Plus guide and a Spirit SX-03 motor with Avant Slot cables were the mechanics of the car. The chosen pinion/crown ratio was the usual 9/27. 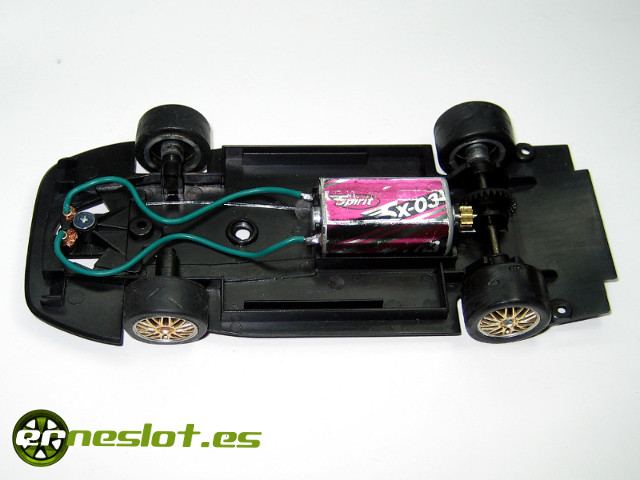 I decided to replace the simple lexan interior with a more worked one home made, but not as light as the original. From a credit card I made the basic structure to which I pasted putty to make the dashboard. In order to finish it, I took advantage of a reproduction of a Recaro seat discarded from a previous job, a driver of a Scalextric car, a steering wheel coming from another car and a resin casted fire extinguisher (not shown in the photo). I also made the piece that simulates the engine starting from another piece of credit card to which pasted pieces to simulate the radiators that the original car had. To conclude the piece, a couple of electrical terminals would make of exhaust pipes. 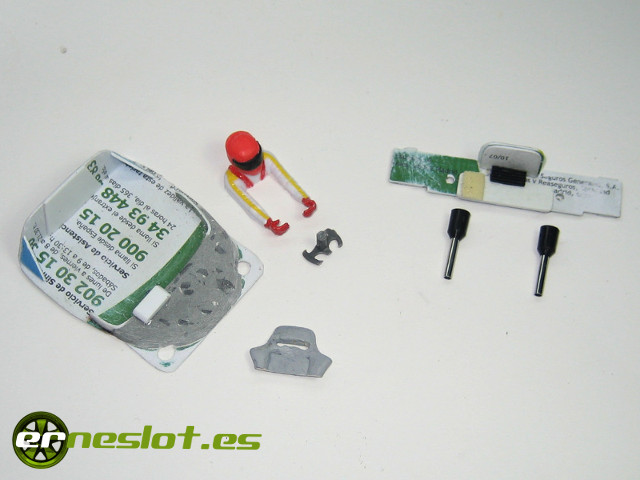 Preparations to paint the body were the usual, a pass with a fine sandpaper all over the body and a couple of coats of Tamiya white primer spray to leave it ready for painting.

For the livery I chose the same one that I had done to the Porsche 991 of Scaleauto, that you can see in the following link. But unlike with 991, I first painted with bright green paint (Tamiya reference X-15) that I left over from work with the 991, and then masked the doors and painted them in white gloss (Tamiya X-2). Really the ideal process would have been to do it the other way around, starting with the lighter color and painting successively with the darker ones, but I took, in part, this type of work as proof of different techniques. With the paint on the body well dried, I painted the back of the car with matte black paint (Tamiya reference XF-1). In all cases, I applied the painting with the airbrush, masking with tape where necessary. As the masking is sometimes not perfect, and this case was no different, I removed the paint that had been cast under the tape by scraping carefully with a toothpick. The painted car looked like this: 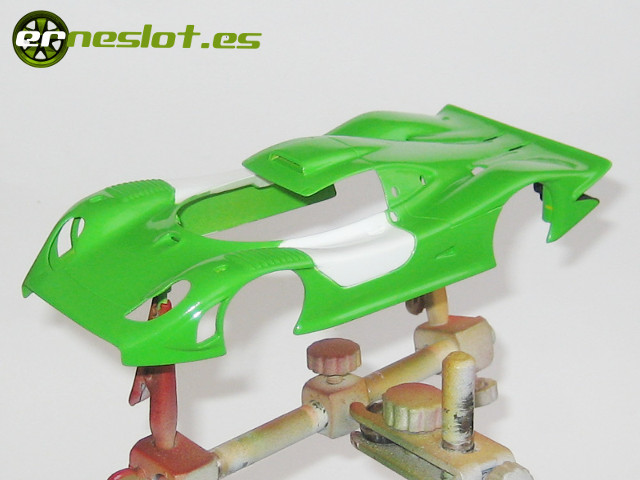 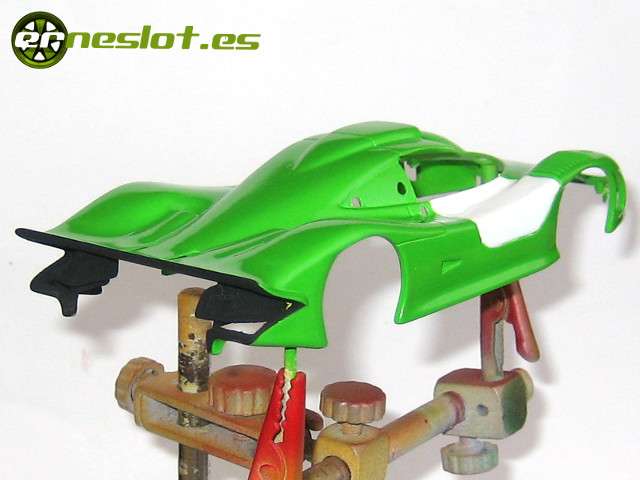 While drying the paint on the body, I mounted and decorated the interior, which once assembled it can´t be much appreciated but I like that the cars well finished although once mounted not all the details are can be appreciated. Over a white Tamiya acrylic paint (reference X-2) base applied with the airbrush, I painted the matt black dashboard with airbrush (Tamiya reference XF-1), the pilot only painted the hull with humbrol enamel and the fire extinguisher with Tamiya acrylic paint applied by brush (reference X-7). The silver strips of the fire extinguisher are two thin strips of aluminum tape, cut with a cutter. 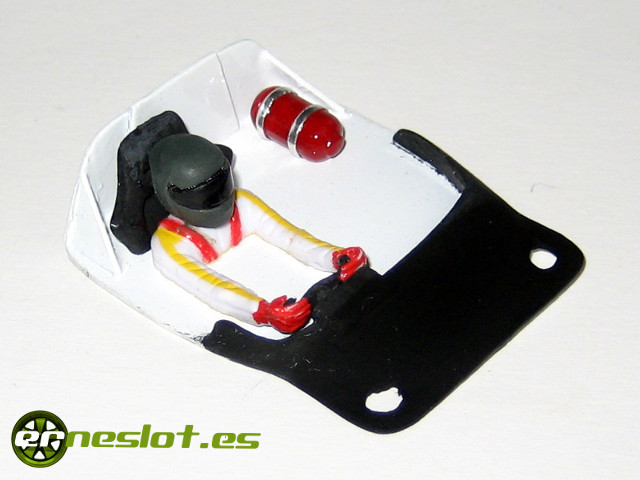 As I had a complete set of decals of the decoration of the 991, I decided to use it for this car and not print specific decals. As it was a decoration with independent logos, except the stripes of the doors, I could use the rest of the decals without problems. Thus the body was with the decals placed: 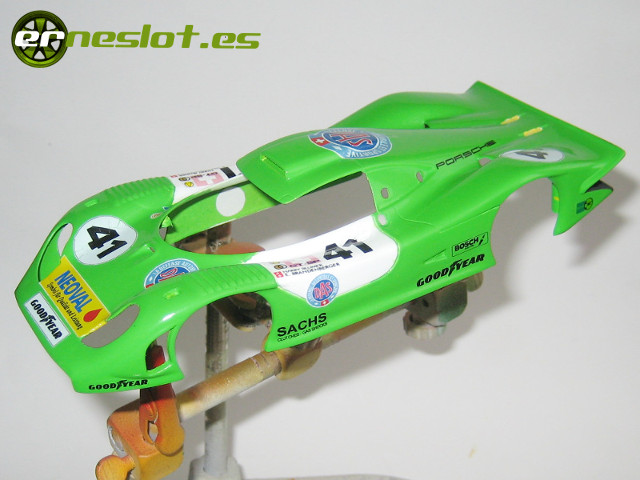 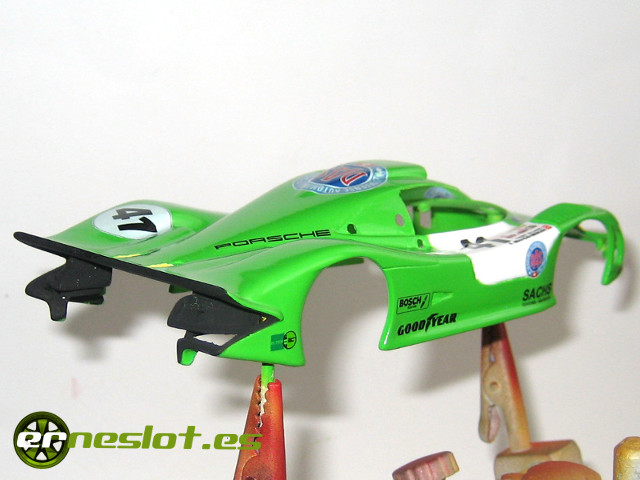 After letting the decals dry completely, I applied to the body a generous coat of automotive varnish to give resistance to the decoration in case of putting the car on the track.

In the waiting times between coats of paint, decals, varnishes and so on I decorated the rear wing, of which I made two units to have a spare part. I simply painted them black Tamiya XF-1 with airbrush, put the corresponding decals and varnish with citadel varnish spray. I like very much the result of that varnish in black pieces.
The part that simulates the engine was also painted the same way although I gave a touch of Tamiya X-11 gray to the radiators. With the varnish well dry I glued with epoxy the two terminals that simulate the exhaust pipes. 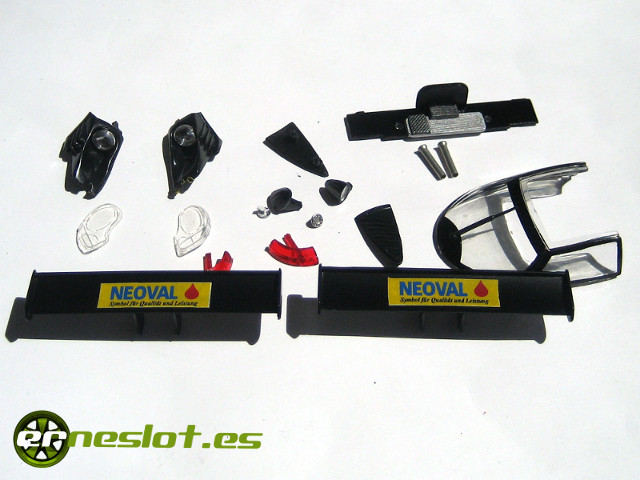 Already only needed to assemble the car to finish it, and the result was this: 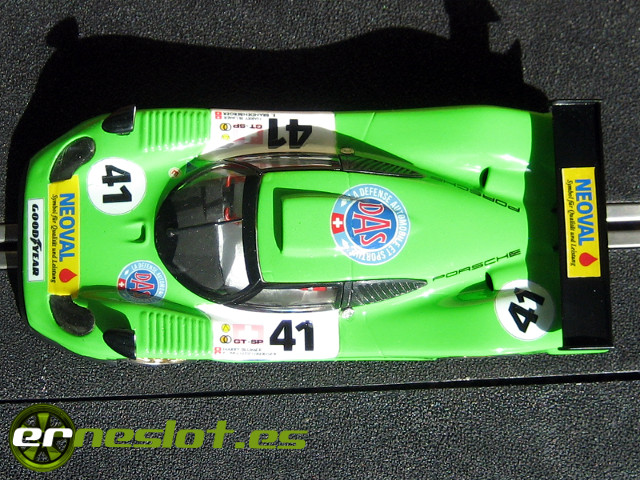 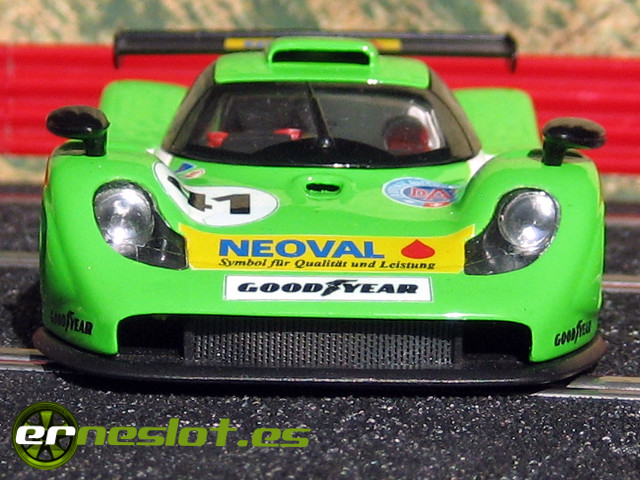 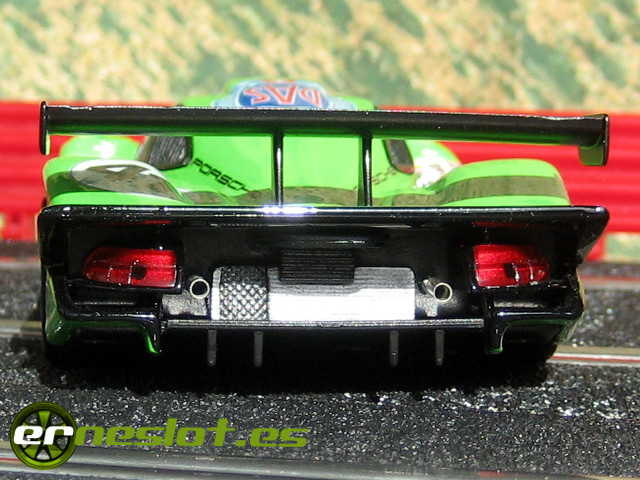 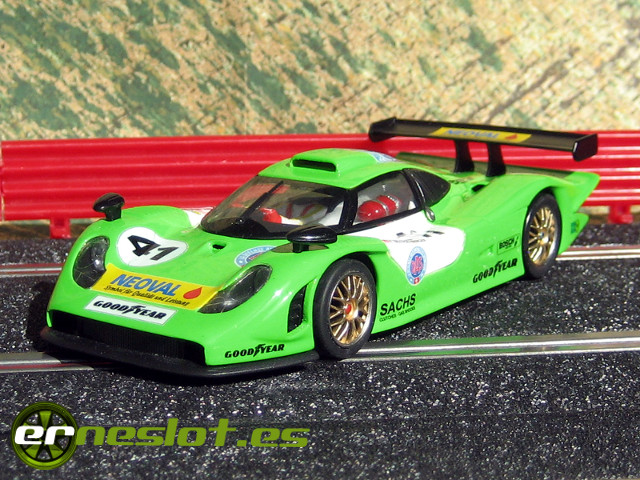 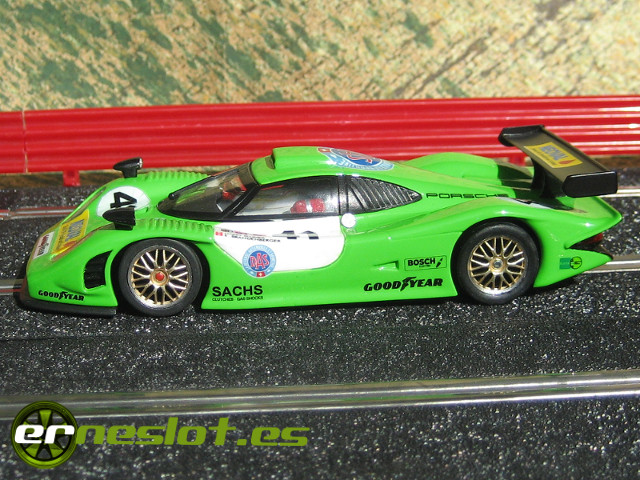 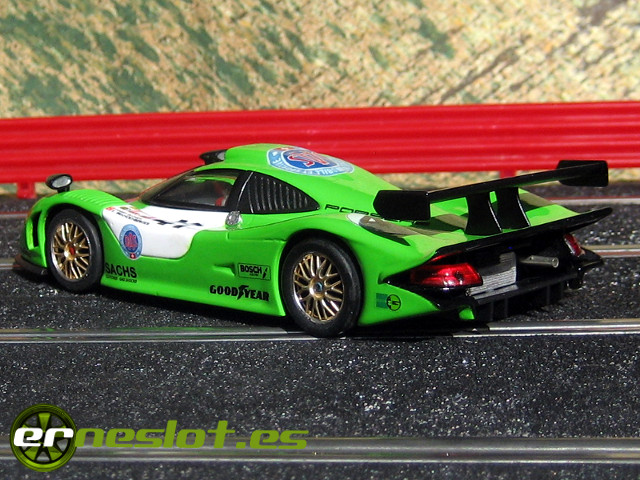 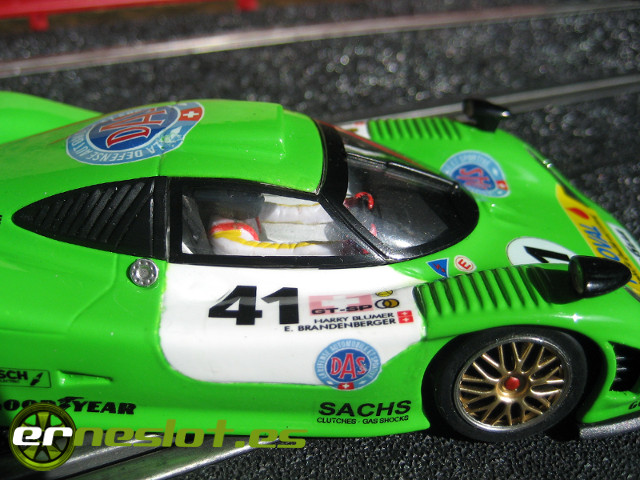 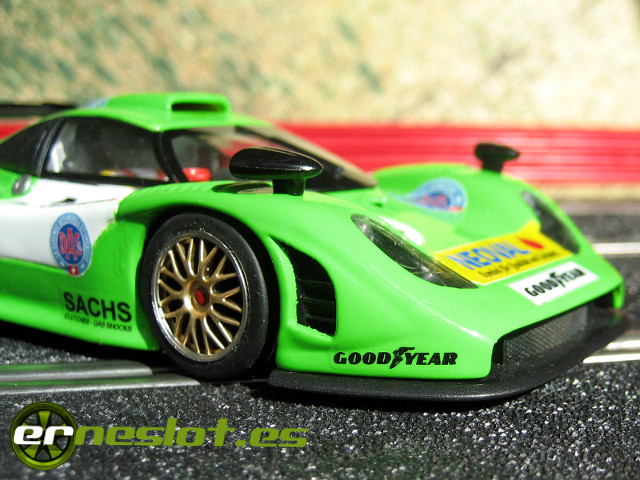 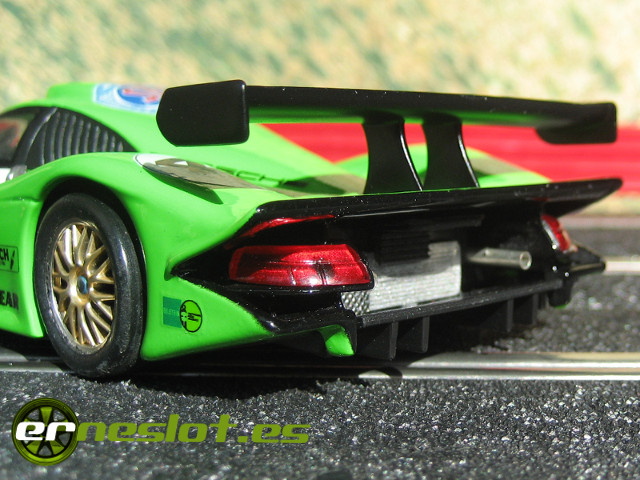 The result has been satisfactory. Logically the base itself is very good, so I have to give to Fly Car Model the merit of the slot car behaviour that managed to make a very nice car and that could be enjoyed on the circuit even in top level competitions. The decor is fantastic and on the track looks good, the tone of green is somewhat "loud" for my taste, but I really wanted the car to be showy, and I think I got it.
I am of the opinion that we have to take advantage of what we have to the maximum, we can assemble a car for parts but if we are a little careful in the assembly and decoration of the car we will give a second life to cars that we have abandoned, or recover material that if well in competition clubs we would not use, in home circuits are perfectly valid. Not all is limited to going to the store to buy the latest model from the fashion manufacturer. And as always, with the satisfaction that gives to do it ourselves.