Based on the 911 Carrera (series 991) Porsche introduced the RSR version to compete in the sport races within the LM GTE category. The model incorporated a revised aerodynamics, a lighter gearbox and lower suspensions since the rules did not allow an increase of power in the engine, that was the same one that mounted the 997 GT3 RSR 4.0. They also focused on improving the weight distribution of the car by using massively the carbon fiber in both the body and the interior of the car.

This is an image of the presentation car: 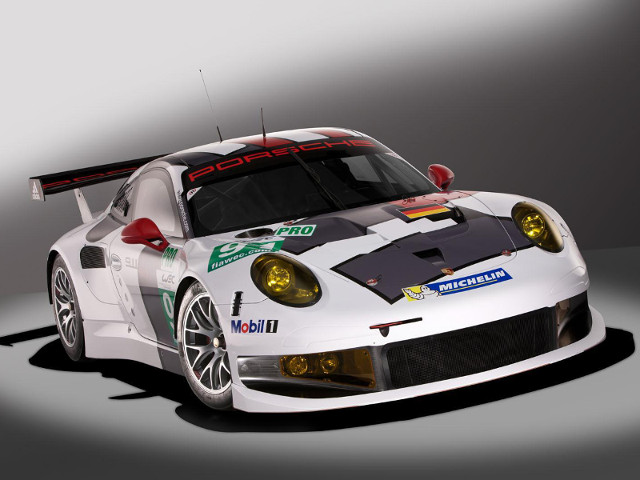 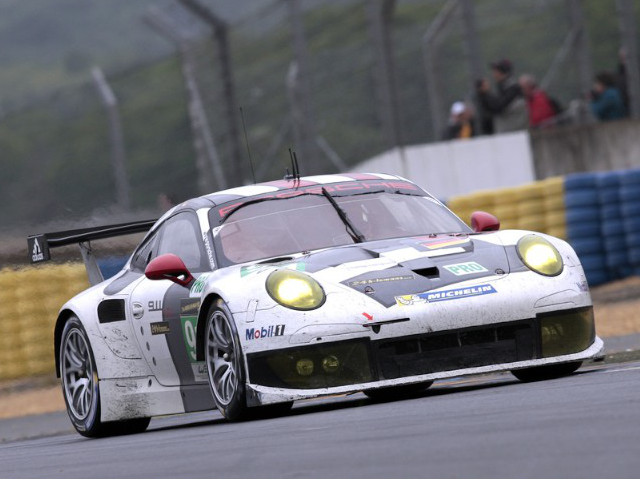 The slot car spanish manufacturer Scaleauto introduced the Porsche 991 at the end of 2015 at 1/32 scale. Apart from the decorated versions, they released a white unbuild kit of the car (reference SC-6135) with the body unpainted, while the chassis and mechanics were mounted and ready to run. This is the kit I am referring to: 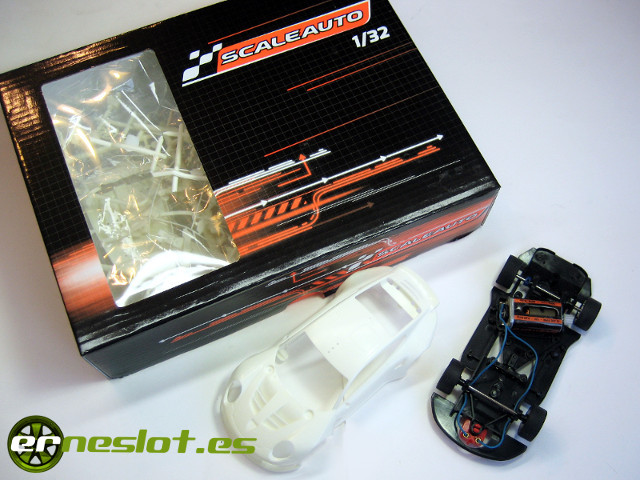 It is a kit of very good quality and very well presented. The body is injected into a thin and light plastic, as it should be for a racing oriented slot car. It includes several extra pieces for us to choose the front part that we like more or will fit better with the decoration we are going to make. It even includes the necessary parts in case we want to fit an Scaleauto LWB chassis with sidewinder or inline motor. In this sense the kit is very complete.
As a negative point to say that the kit comes without mounting instructions and from the back of the body to the chassis there is a gap of about 2 mm. But there is no piece to supplement for it ... It seems as if they had forgotten to include any piece...

I want the slot car for race, but I also want a colorful and beautiful livery. The decorations of the current LMP and sports cars are very complex to reproduce and I do not like them. I prefer simpler decorations, like the racing cars of the 1970s and early 1980s. After thinking about it a lot I decided to do a reinterpretation of one of the liveries of the racing Porsche 911 RSR in the 1970s and within them there was one that I especially like, which is this: 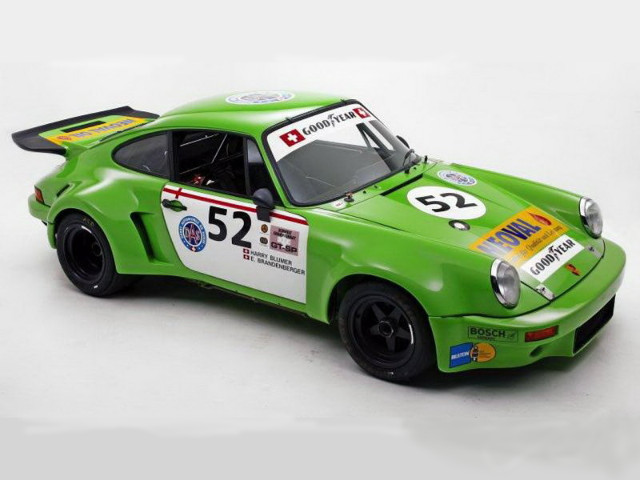 With this car, the Swiss driver Harry Blumer raced and won the 1974 Swiss Resistance Championship.

The good thing about decorating a white body kit is that we do not have to remove the paint or disassemble the car since the kit is made of white plastic unbuild. In fact, even the rear bumper has to be mounted because it is a independent piece of the body. Once the basic parts of the body were assembled, I gave a coat of Tamiya white primer, a primer with a very fine finish that leaves the body perfectly ready to apply the paint. Prior to the spray primer, sanded very gently the surface of the body with fine waterproof sandpaper, to improve the adhesion of the primer.

The decor of the car is very basic, all painted green with white doors and the rest of the decoration is limited to various stickers of the sponsors. First, I painted the doors with Tamiya white acrylic paint applied with the airbrush. With two very fine coats was enough to leave a white color solid enough and with a good finish. 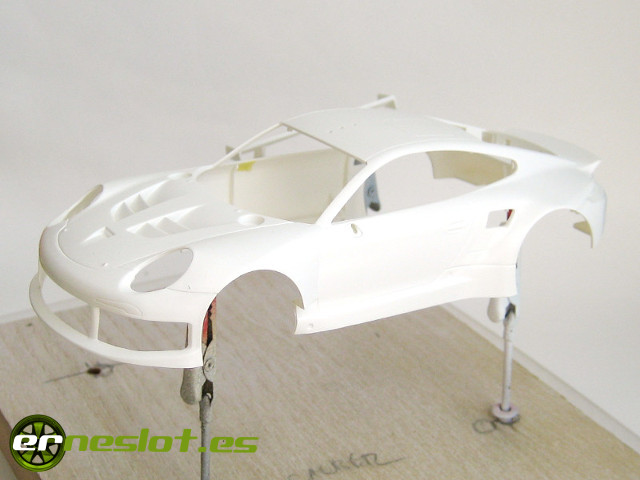 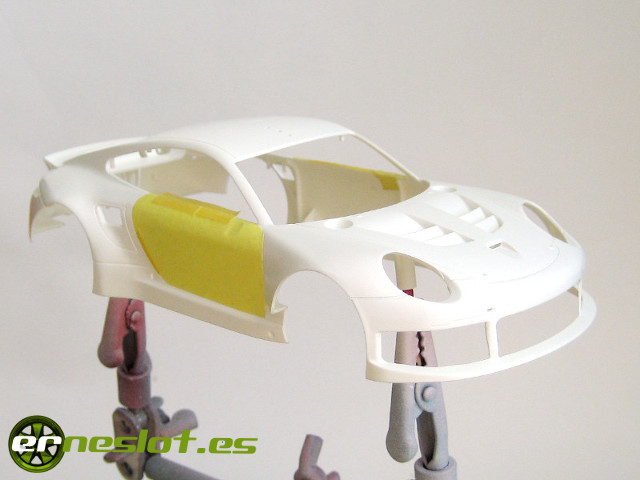 The green color chosen is the Tamiya acrilyc X-15 reference, it is a slightly darker green color than the original. I applied it with airbrush slightly diluted with 96° alcohol. The color covered something worse than I expected so that I had to apply two coats with a waterproof sandpaper 1500 grit pass between one and another. 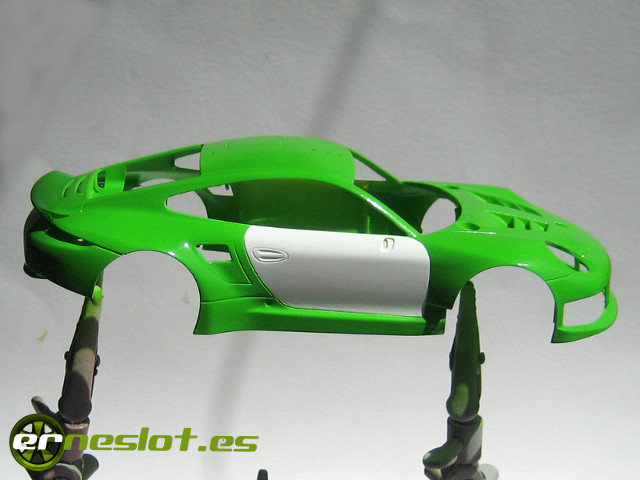 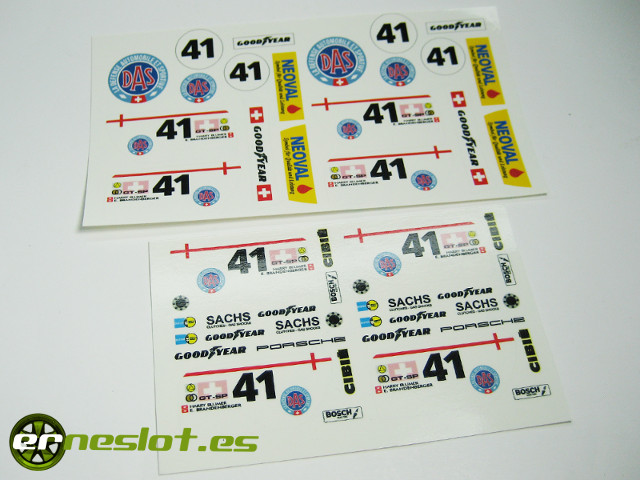 The placement of the decals did not had any difficulty. For the doors I chose the decals printed on transparent paper because it had been very well painted white and it was not necessary to use the decals with white background. 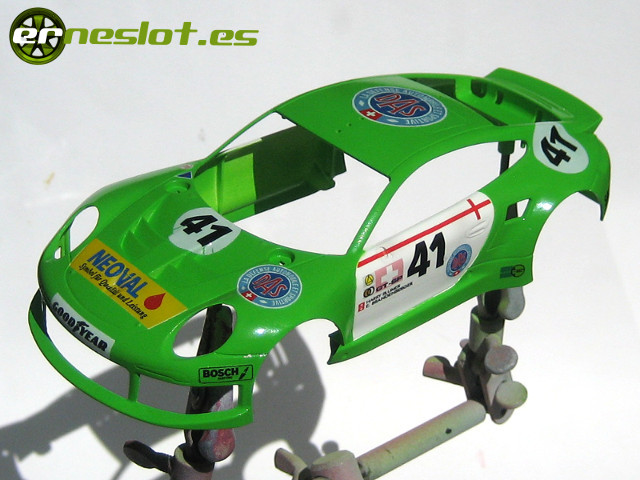 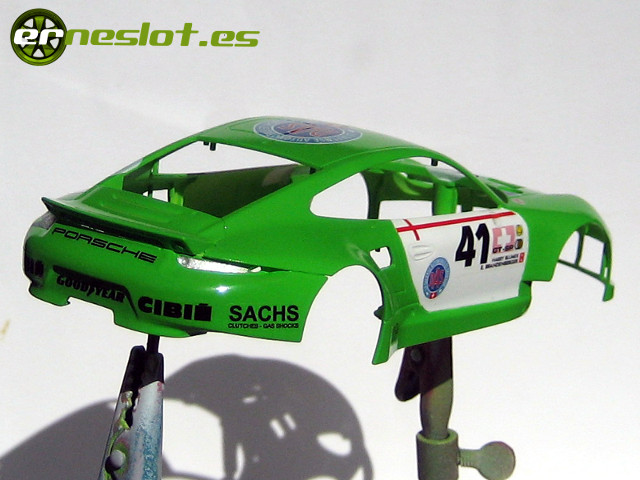 After letting dry the decals, I applied a generous coat of automotive varnish to the entire body and let it dry for 3 days until the varnish was hard enough. 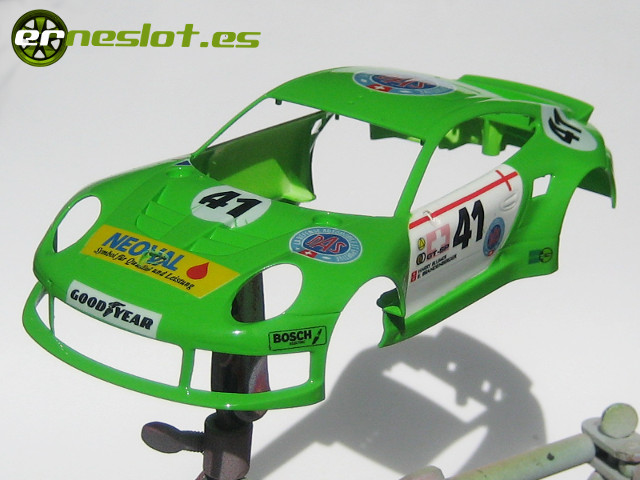 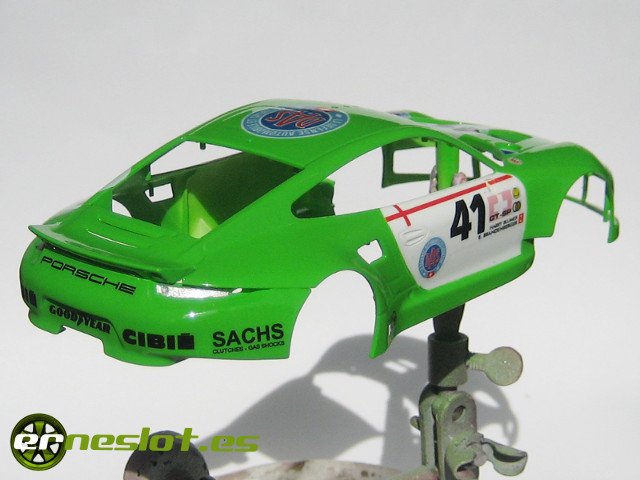 I did the same with the rear wing a piece who is stuck in the chassis. 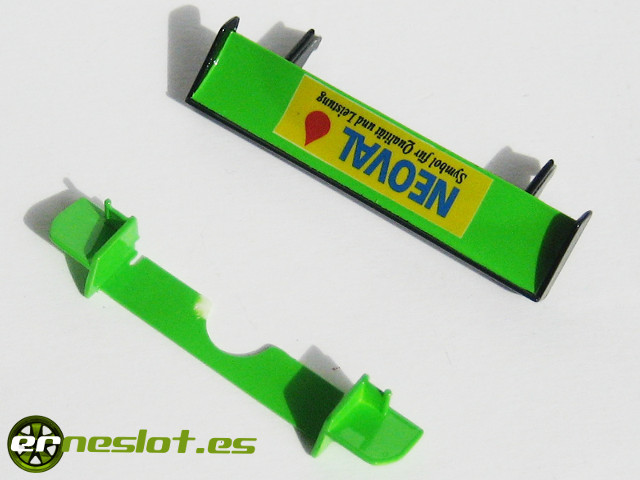 The pieces where are place the headlights, the wheel inserts, the mirrors and the pieces placed in the side air intakes were painted matte black (with Tamiya acrylic paint) and then varnish with Citadel satin varnish, getting a very nice effect. 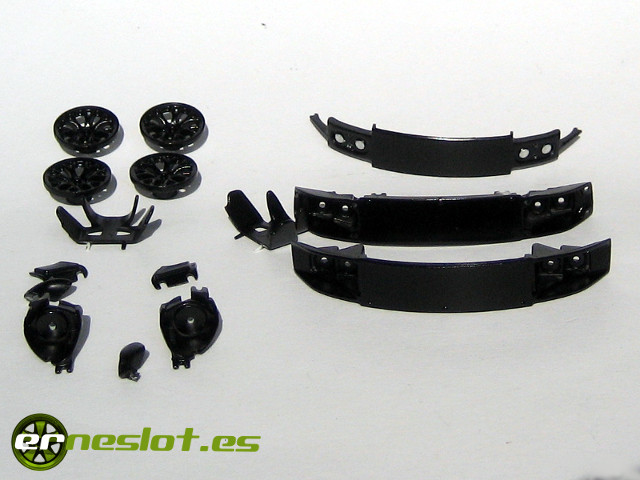 With the varnish completely dry, I placed the headlights in place. The pieces that simulate the headlights and the domes that cover them are injected in transparent plastic. I painted the headlights on the back with gray metallic acrylic paint. The domes of the headlights were painted with yellow translucent paint and the rear lights with translucent red color, Tamiya acrylic in both cases. The result is very real, and this way we get the paint does not move from its place because it is painted inside. 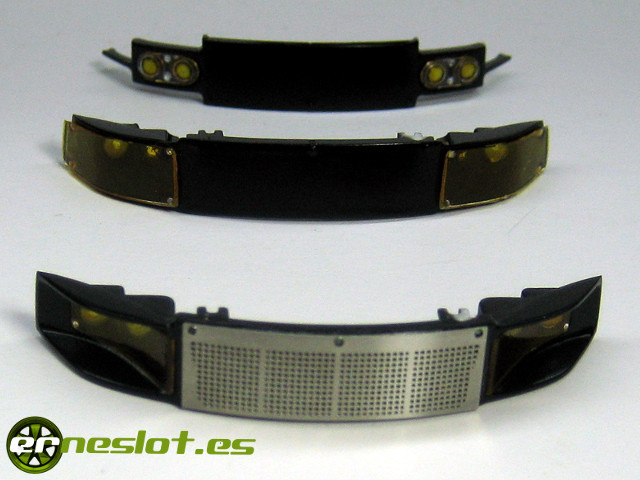 The interior of the car was painted with the same tone of green as the body, and the dashboard matte black color, in both cases with Tamiya acrylic paint applied with the airbrush. 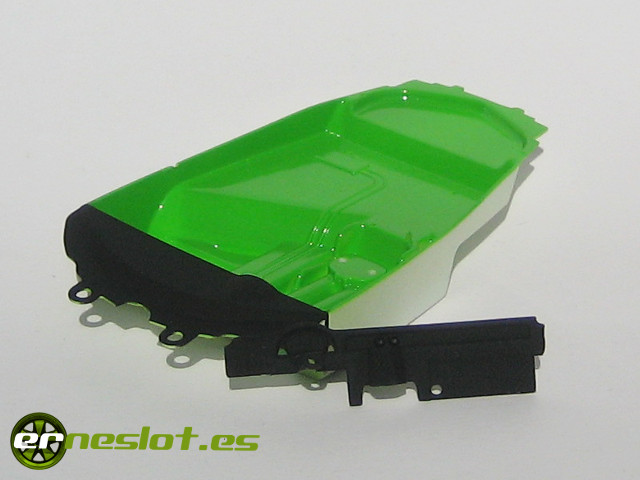 The rest of the components of the interior (driver, steering wheel, roll bars, fire extinguisher...) were painted with acrylic paint in some cases and with enamel in others, all with the brush. After letting them dry well, I set them on the tray with this result. 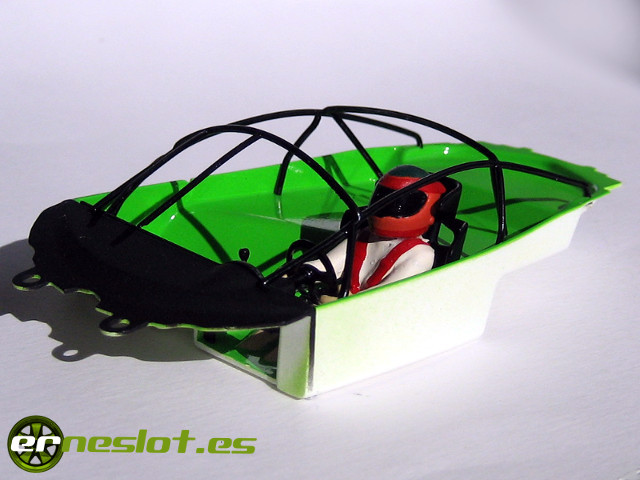 The chassis of the car came with the mechanical components mounted, just pasted the inserts in the wheels and a piece that simulates the back of the car. 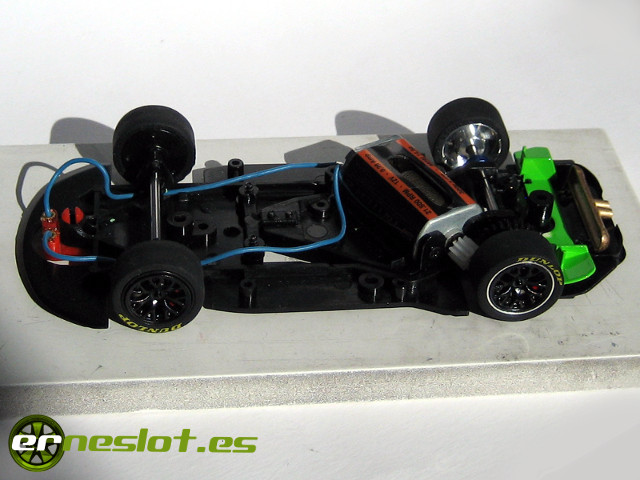 Finally, I placed the windows. Previously had painted their black edges with Tamiya black acrylic paint. Opposite to what I did with the 1/24 911 GT3, I painted them on the outside, instead of the inside to maintain the matte tone of the black, as it gives a more real appearance to the windows. After letting it dry I mounted them in the body with some difficulty since the varnish coat in some points was very thick and did not let the windows were well flushed. 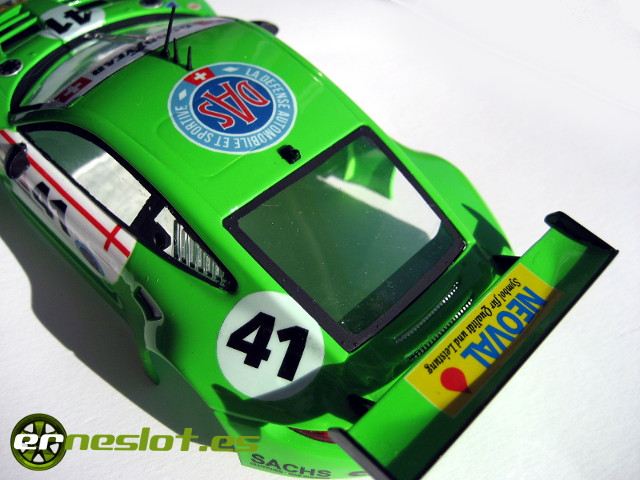 After the windows, I pasted the rest of the details, like the gas tank caps (which I decorated with a waterslide decal) and the windshield wipers, a fairly ugly photogravure piece. 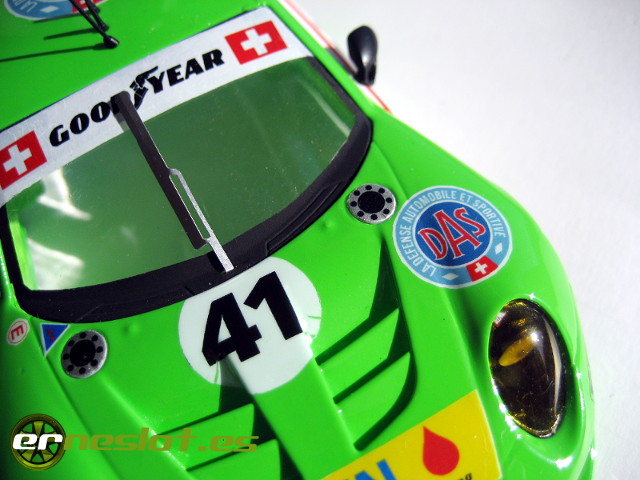 Finally, screwed the the chassis to the body with this result. 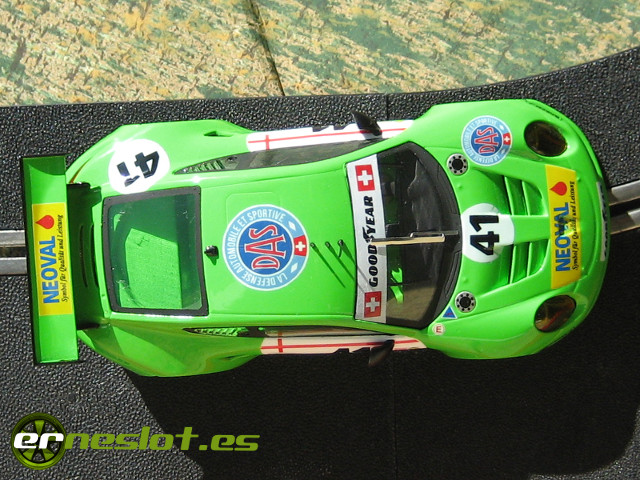 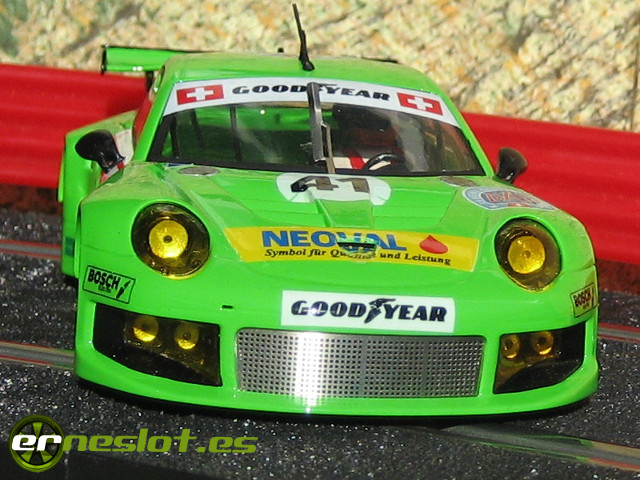 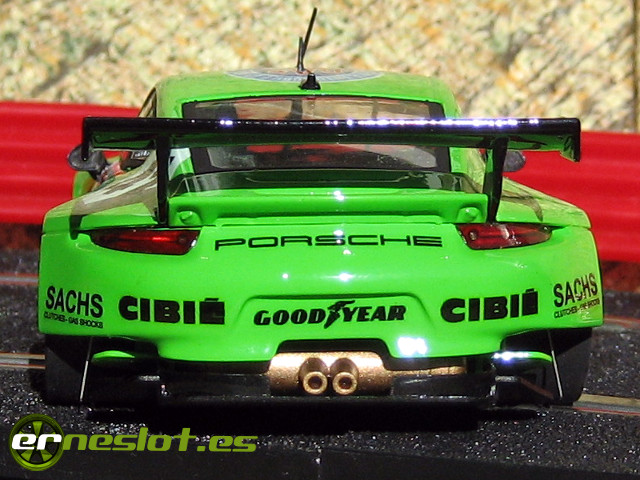 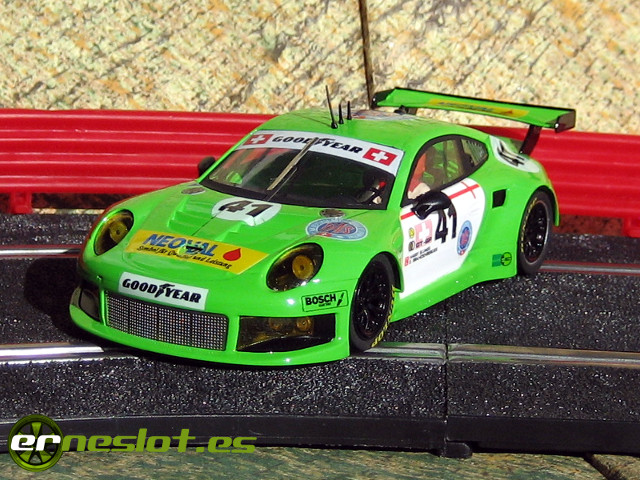 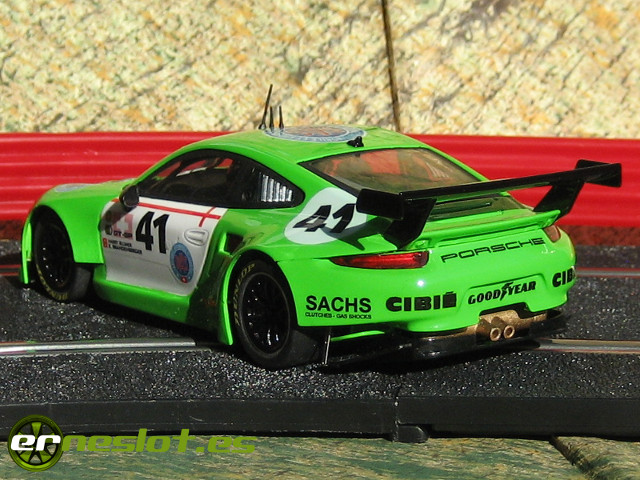 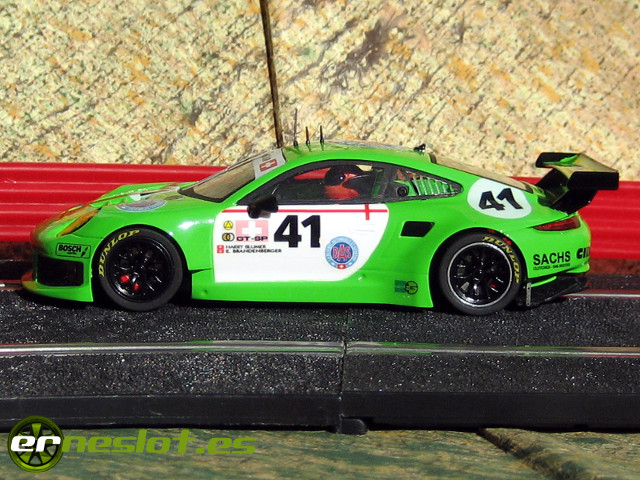 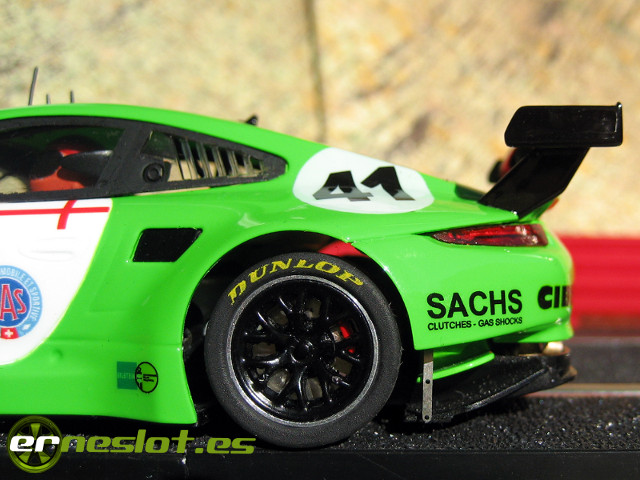 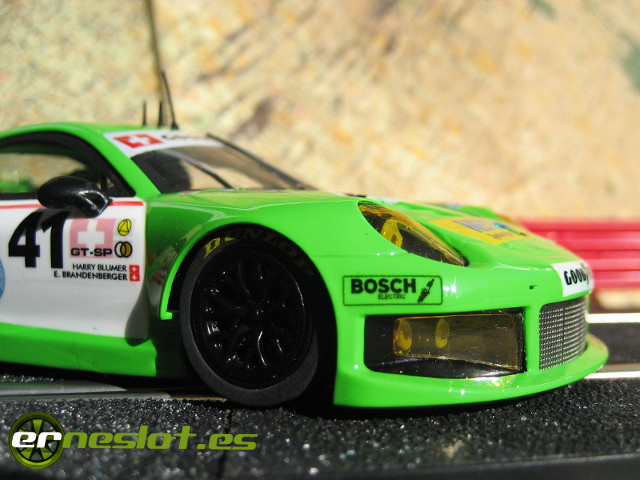 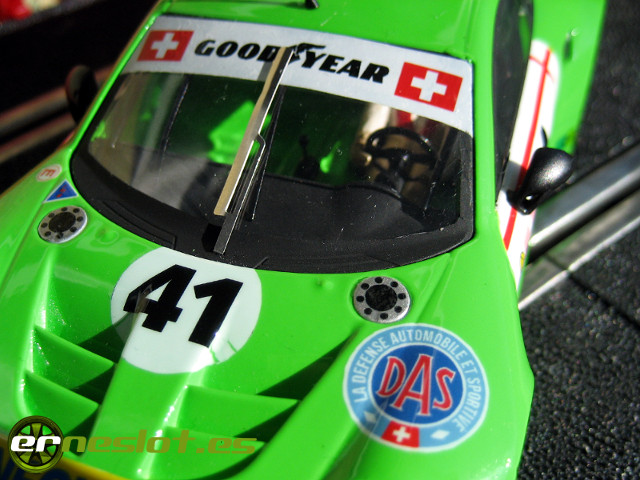 Failing to put it on track to check the performance of the car, I only can be proud of with the work. Some small defect in the placement of the decals and the small problems of adjustment of the crystals, which I will take into account for future works, do not detract at all a very showy and well finished slot car. Maybe some details could have been better but I love the result. I´m going to feel sorry racing with it, but it´s a slot car after all.

If you like the decoration, the waterslide decals sheet to make it is for sale.