I have always liked the rally slot cars, probably because when I was a child the competitions that had more impact in the media were the rallies and because my first Scalextric, an Exin RC40 set, included two rally cars, the Lancia 037 and the Ford RS200. Also by that time, mid-80s, the group B rally cars were in full rise and fall and did not leave indifferent to any fan of motorsport.

When I started to go to slot clubs I always competed in rallyslot, it´s a type of races that I like a lot, it runs on very varied and different stages for each race (usually 4 or 5 different ones) where you can not practise, you have to be very sure how is the slot car performance at any situation, which is the most suitable set-up ... In addition, you can race in many different categories from simpler cars, practically taken out of the box and placed on the track, such as the N group, up to categories with cars of great complexity and multiple adjustments, such as the WRC, which allows to choose the level of difficulty of the preparations.

I liked (and I like) to race but did not want to complicate myself with the adjustments so I used to enter in the most basic categories, N and Super 2000, with Scalextric and Ninco cars (Citröen Xsara, Ford Focus, Renault Clio...). Logically as time went the rallyslot world evolved a lot and when I resumed the competition after a few years there where new manufacturers and new categories. One of those manufacturers is Avant Slot, for whose rally models I feel weakness, even though my firsts experiences with those slot cars was very negative. These are cars with a complex set-up due to the multiple adjustments of the chassis, but once you understand the how the chassis works and how it can be regulated you will have an extremely competitive car with a tilting guide that does its job perfectly And allows to go very fast even if the track has irregularities.

Within the Avant Slot rally cars range there are two models that I especially like, the Mitsubishi Lancer EVO X and the Peugeot 207 S2000. Recently the manufacturer has put on sale a new decoration of the Peugeot 207 with a new chassis, with fixed guide and interchangeable motor pod. In addition to the new decoration, have also put on sale a kit of the car unassembled with the body white to decorate. This is the kit that is for sale: 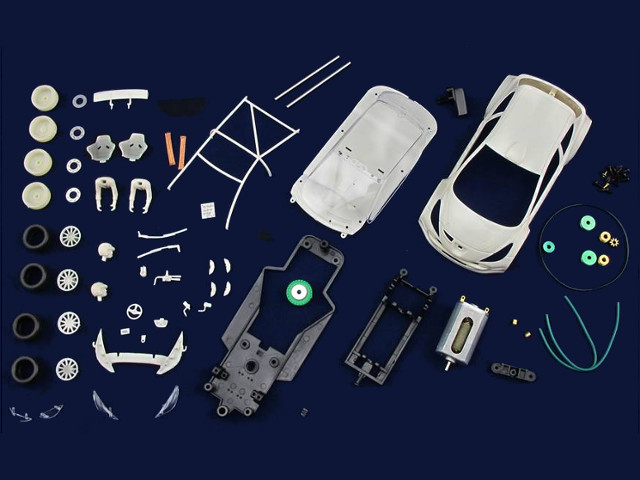 I get one of those kits without thinking about the decoration would be because as I said I really like the car and included the new chassis for Avant Slot rally and wanted to try it out. While was deciding the decoration of the slot car I passed fine sandpaper softly to the body and apply a generous coat of white Tamiya primer.
With the primer dry, and after the oblygatory pass with fine water sandpaper to remove imperfections and defects, I applied two coats of Tamiya´s bright white acrylic paint with the airbrush. Passing a waterproff sandpaper to the surface between both coats. With two coats of paint the result was satisfactory, with the surface well covered. 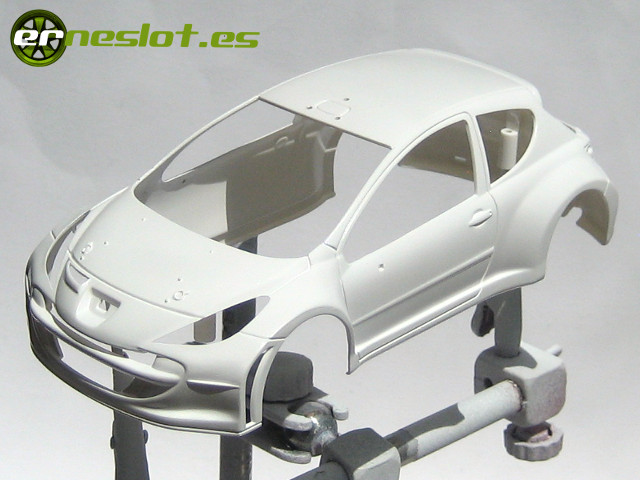 For the decoration I decided to do a reinterpretation of the decoration of the Peugeot 205 Turbo 16 group B from the official Peugeot-Talbot team who raced and won 16 rally events, two driver and two constructors titles between 1984 and 1986 becoming the Most successful group B car of all. This is a photo of the Peugeot 205 Turbo 16 EVO II taking part in the 1986 Monte Carlo rally: 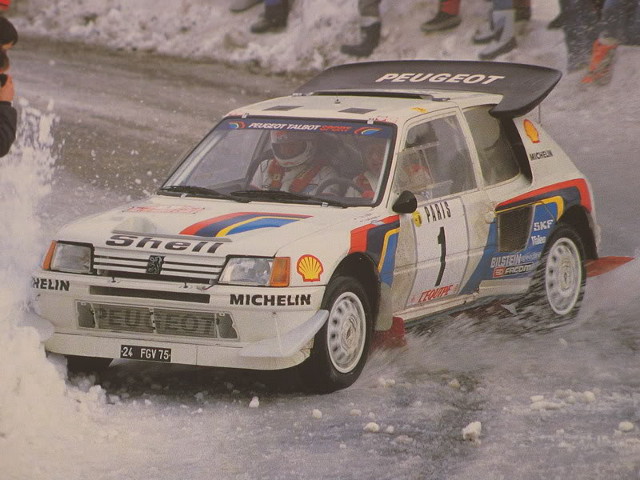 The decoration is very simple, with the official colors of the Peugeot-Talbot rally team and the sponsor logos, all over white background. A decoration completely away from the decorations of the current rally cars, well, and in general of all today racing cars. I decided to make this decoration for two reasons:

The set of waterslide decals I developed for the car is this: 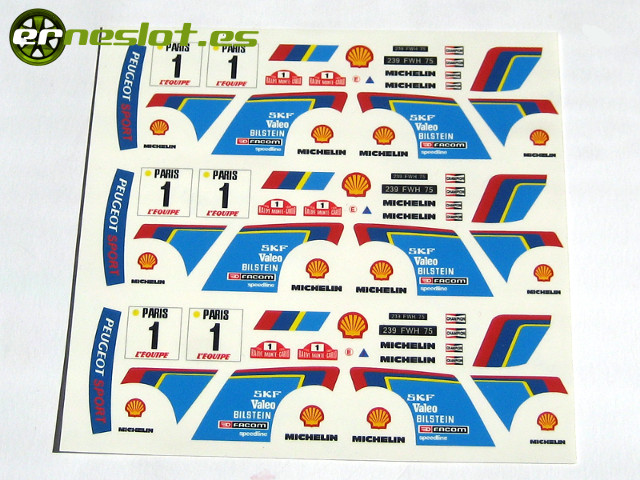 Did not take me much time to do them except for the fenders and the bonnet ones, which required enough adjustment work and several printing tests to get the proper shape and size. But the rest, being logos and letters were very quick to draw.

Not surprisingly, the placement of the decals did not have any difficulty except in the fenders, which required a great deal of patience, a well-moistened surface so that the decal would slip easily, a good amount of MicroSol, to soften the decals and fit well to the surface of the body, and another of MicroSet to leave them well fixed. 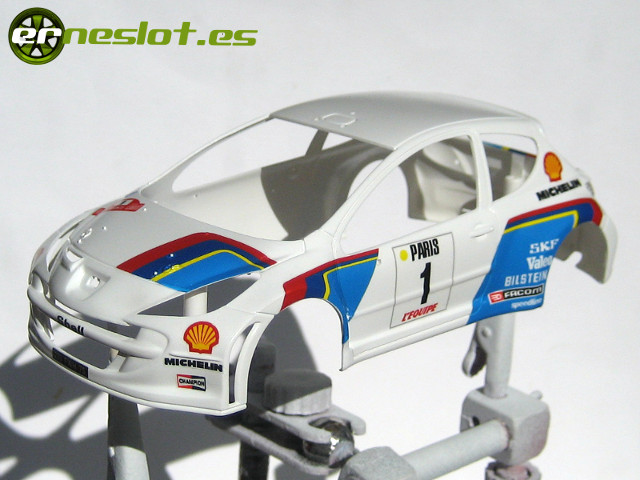 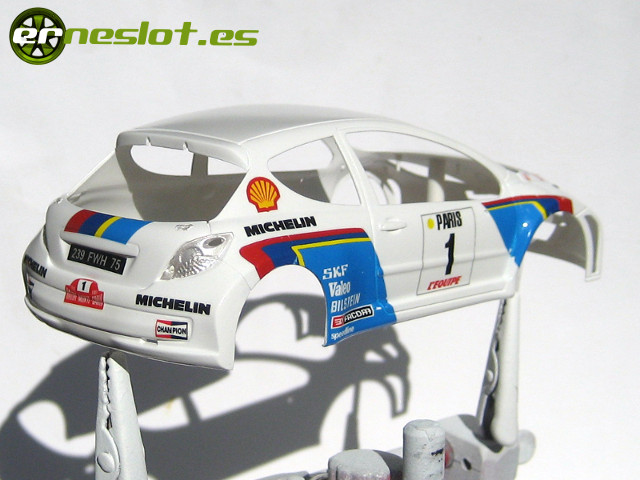 After an afternoon of work the decals were well placed but not perfect, especially those of the front fenders, and is because the surface is so irregular that despite the care I had adjusting them with the MicroSol and MicroSet the elasticity of the decal has a limit, and I passed that limit in some points as you can see in the following images. It really does not worry me so much, it is a evidence of the limitations of the homemade decals on surfaces as irregular as the rear of the front fenders. Needless to say, the rest of the logos were perfectly placed without any difficulty.

After letting dry the decals thoroughly and the bottom of the rear lights that I had painted with Vallejo gray metallic acrylic paint, I applied a generous coat of automotive varnish to the entire body and let it dry for 3 days until the varnish was hard enough before to continue with the assembly of the car. 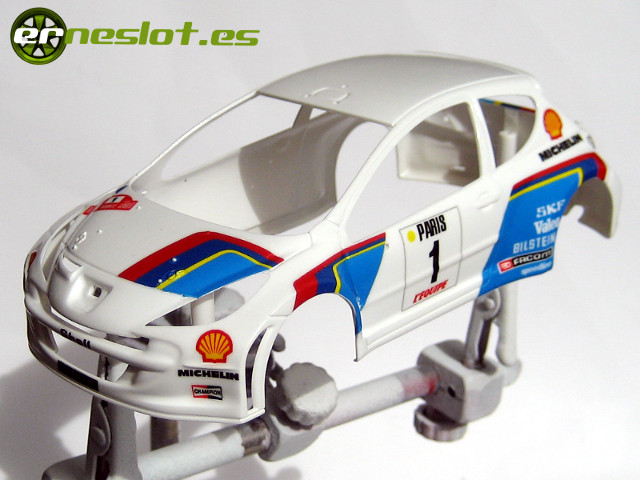 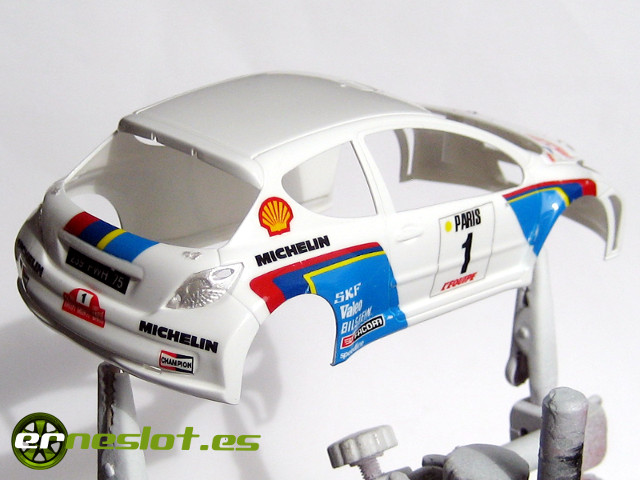 The interior of the car is made up of several pieces, the tray, the seats, the drivers, a steering wheel, roll bars and varied levers. I painted white the tray and the simulated anti-roll cage, when it was very dry I painted the dashboard matte black and some details of red, green and metallic gray. The seats, and the rear wing too, were painted matt black and then varnish with Citadel satin varnish. The driver and co-driver were painted with Humbrol enamel by brush, unlike the rest of the interior, which is completely painted with Tamiya acrylic paint. 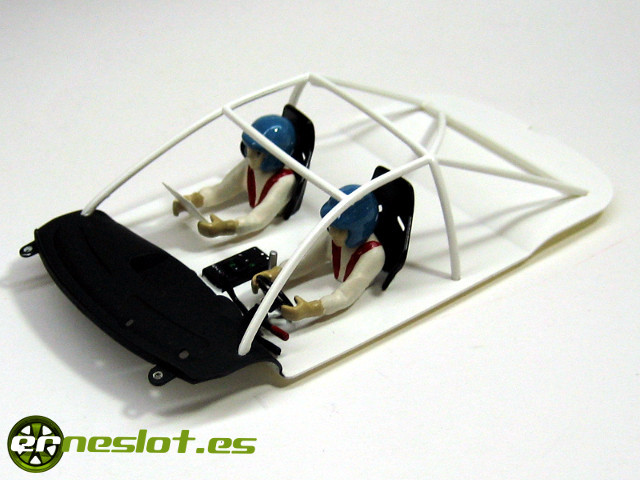 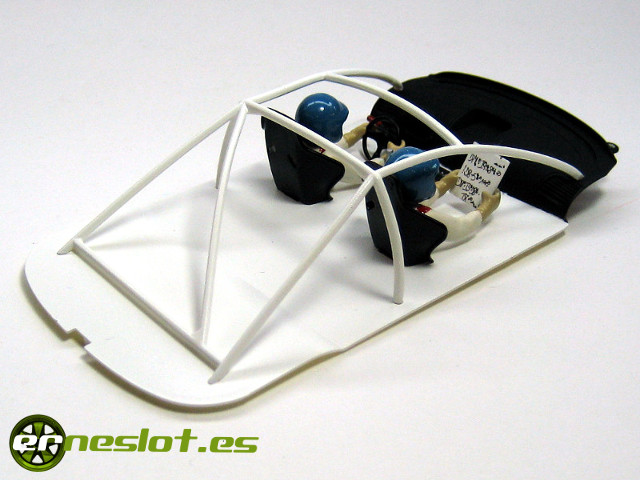 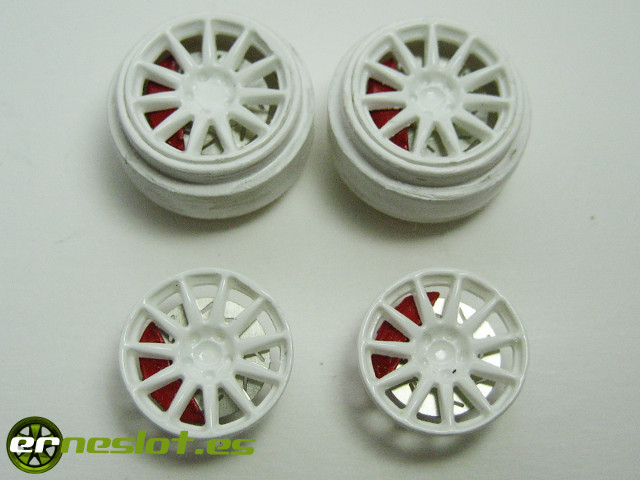 The mechanics of the car were simple to assemble, but I replaced the original motor of the kit (of 25,000 RPM) by a Republic motor since I really like its behavior in rallyslot race. The rear wheels were also replaced by a aluminum 16.5 mm. diameter, Avant Slot spare parts in both cases. 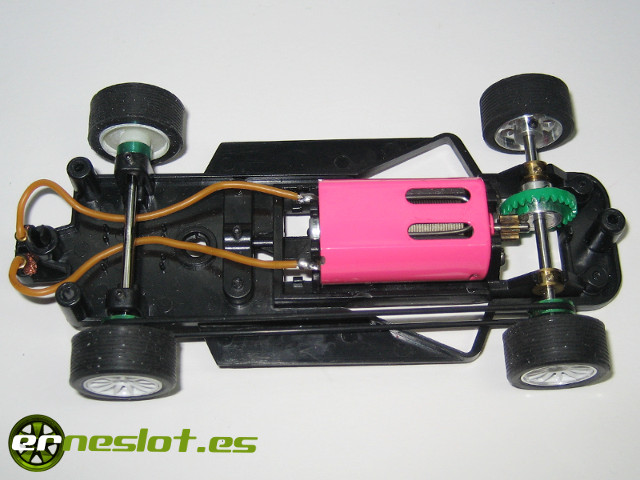 And after a careful assembly, welding some parts with an electric welder and some others stuck with cyanoacrylate, as I did with the Sauber C9, the car looked like this: 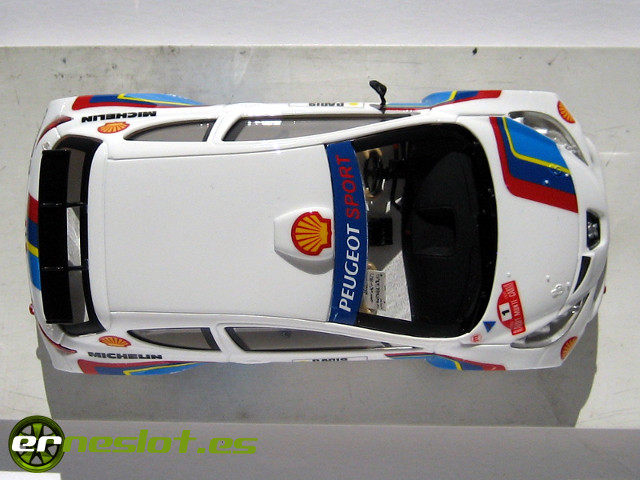 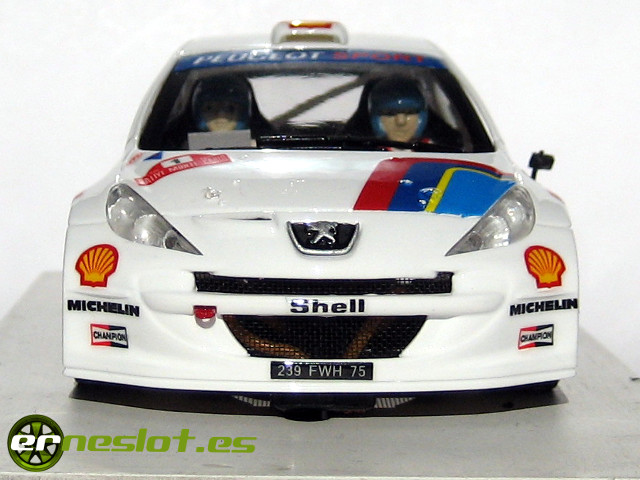 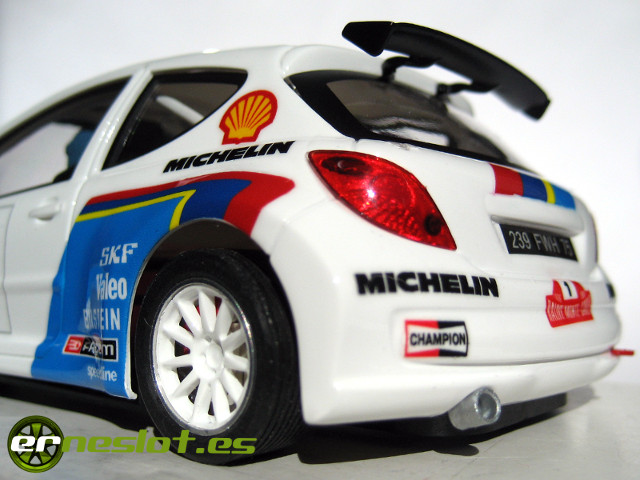 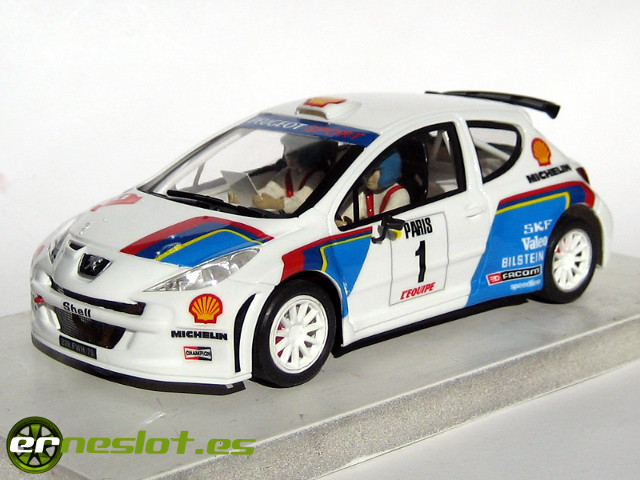 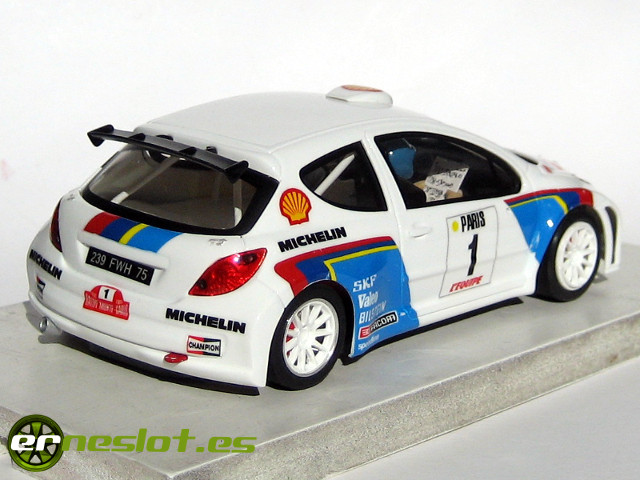 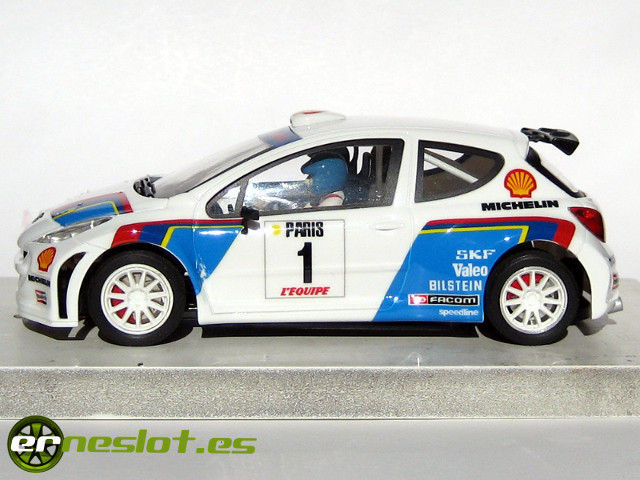 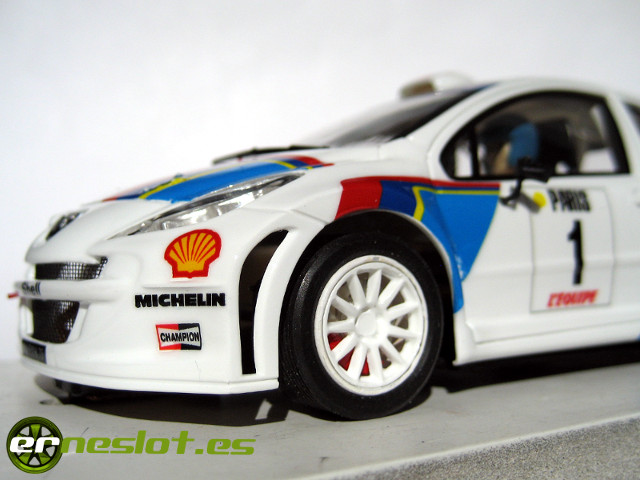 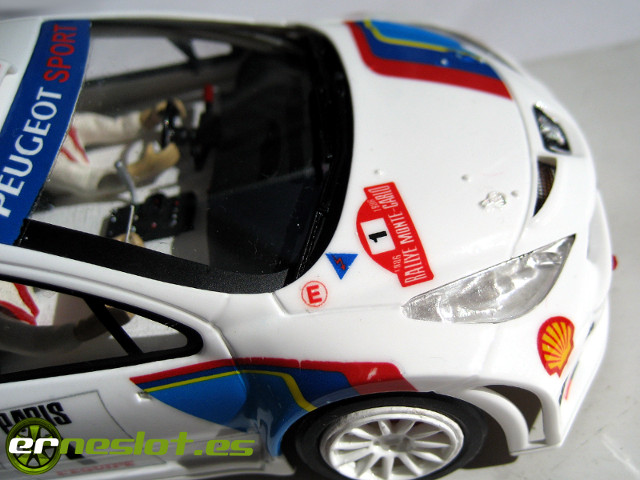 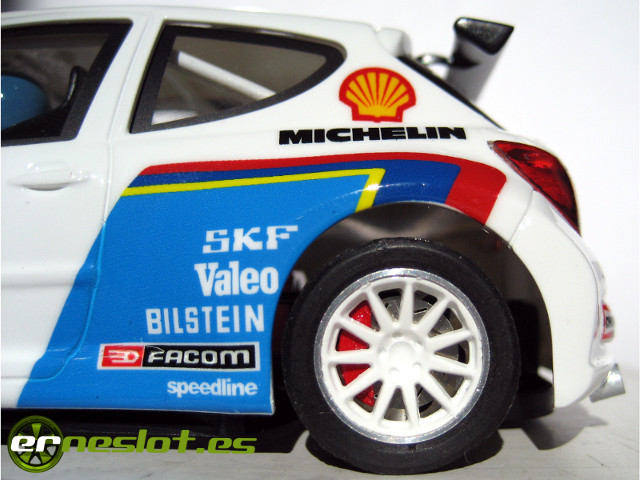 I really enjoyed the building of this car. The quality of the set makes it´s build a child´s play and I have found it more "complicated" to decide the decoration and to develop the decals than the decoration and assembly of the car itself. Regarding the performance of the car, as it corresponds to the rest of Avant Slot rally cars, is spectacular. This kit seems to me a perfect option to have a highly competitive rallyslot car with a custom decoration.

If you liked the decoration, the decal sheet to make it is for sale.