The union of the Swiss sport prototype cars builder Sauber, along with Mercedes-Benz meant the return of the German manufacturer to compete at the highest level after the retirement of sport competitions due to the accident of Le Mans in 1955. Sauber had already built a car sport with remarkable results for a private team, as the C6 prototype, and Mercedes-Benz became interested in those cars to return to racing as a engine supplier.

The car was used for three seasons. 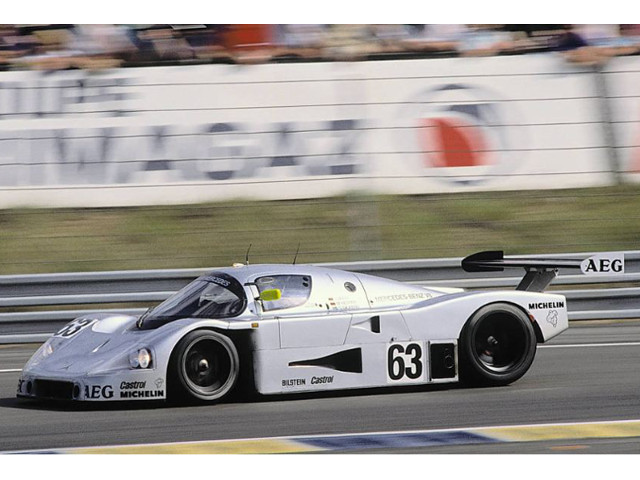 The Italian manufacturer Slot.it has reproduced the car for slot tracks at 1/32 scale with decorations of each of the three seasons it competed, even they released a box with the three cars that participated in Le Mans in 1989 within their "Le Mans Winners" series.
In addition to the RTR cars, they has also released for sale a white slot car kit with complete mechanics and body kits to decorate and assemble. The following is the body kit I bought with reference CS05b1: 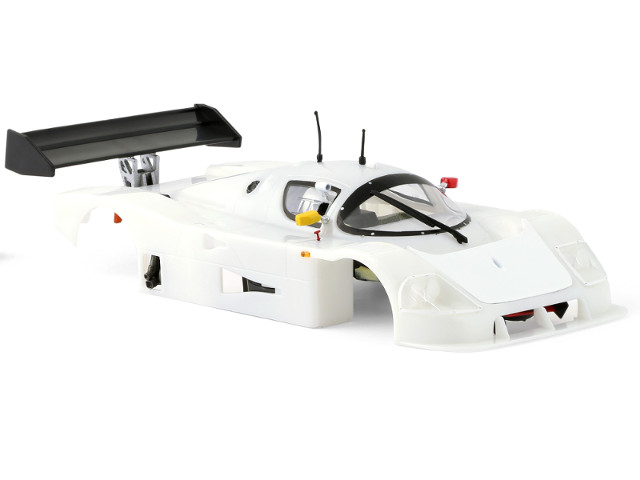 The Sauber-Mercedes C9 is a car that I´ve always liked, despite the few decorations the car had during its three years of life in competition, and as Slot.it had the car as white kit to decorate decided to get one. Logically, a car that only six chassis were produced could not have many different lyveries, as it were, so I developed a new livery. The inspiration came to me as many other decorations by the sport cars of my favorite manufacturer, Porsche. In this case, the decoration was based on the Porsche 917 livery in the 1971 Daytona 24 hours, as shown in the following picture: 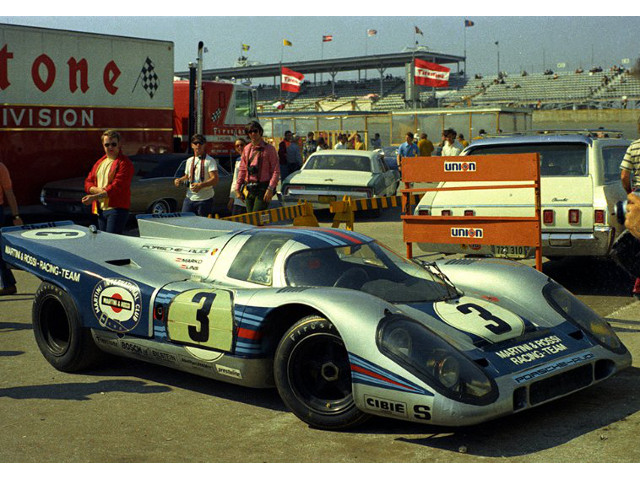 Basically, the decor is an adaptation of the Porsche 917 one to the Sauber body, so the base color would be metallic gray and the waterslide decals would give the other colors. Therefore, the first thing I did was spend a fine sandpaper gently throughout the body and remove the few burrs the mold had, which by the way, is of a exceptional quality. After that, a coat of gray primer and when itwas well dried a coat of acrylic Tamiya metallic gray applied with the airbrush. 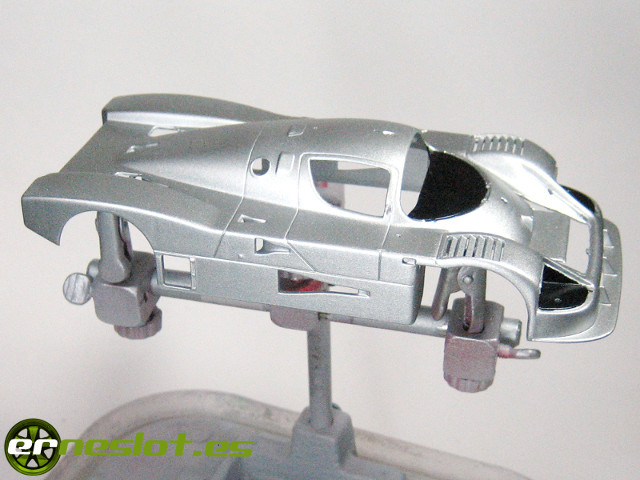 The few details of the painting, which was the dashboard and the back of the front headlights, I painted with black acrylic Vallejo paint by brush, who works perfectly for these details.

Let dry the body thoroughly and prepared the decal sheet and the tools needed for its placement. The decal sheet consists of two parts, the decoration itself printed on a transparent decal paper and the "Martini Racing" logos and other small details printed on white paper. 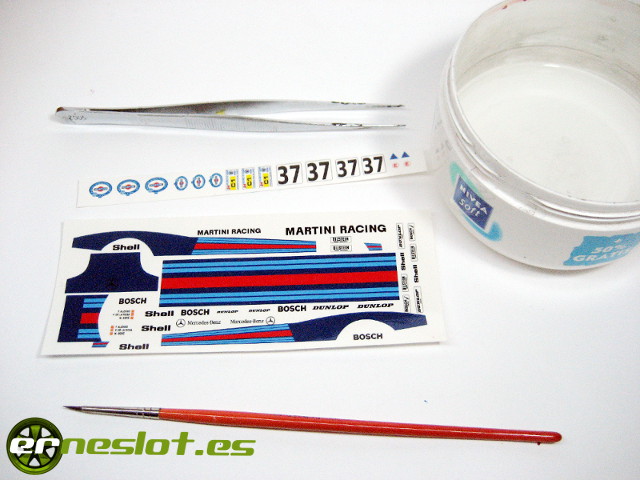 When I put the decals I like to start with the most difficult, and in this case were the two long declas of the sides and the top one, which runs along the car lengthwise. To achieve an adjustment in certain parts, like inside of the rear wheel arches or the roof of the car, I had to use some Microsol to soften the decal and conformed to the shape of the car. I also used the MicroSet for the decals to remain firmly attached, especially in the side air intakes. 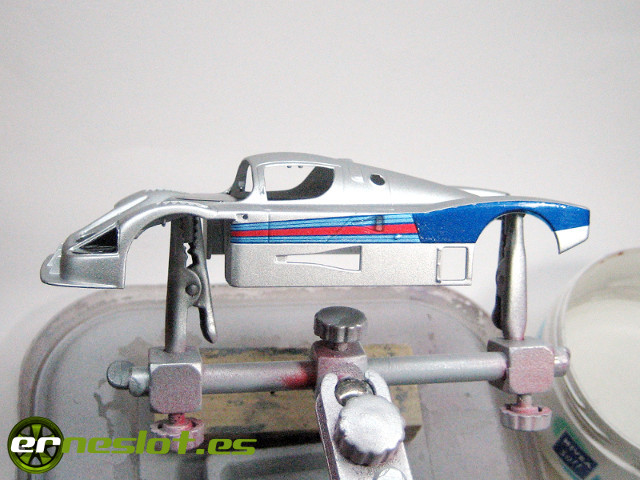 Once large decals placed, the rest had no difficulty. 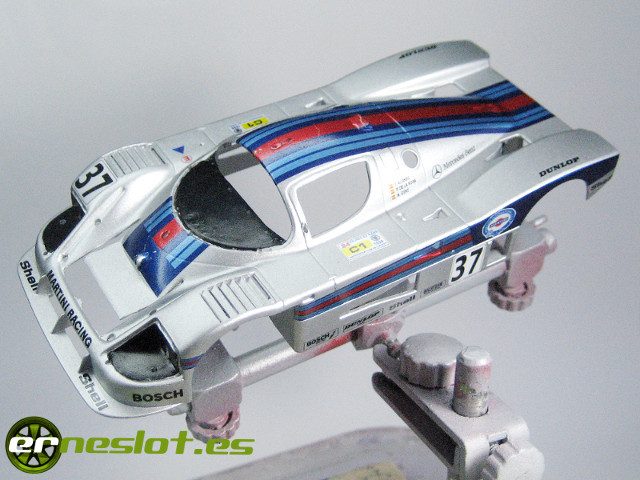 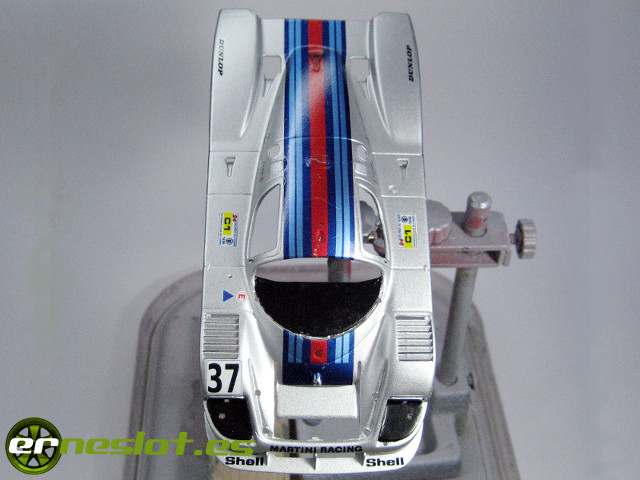 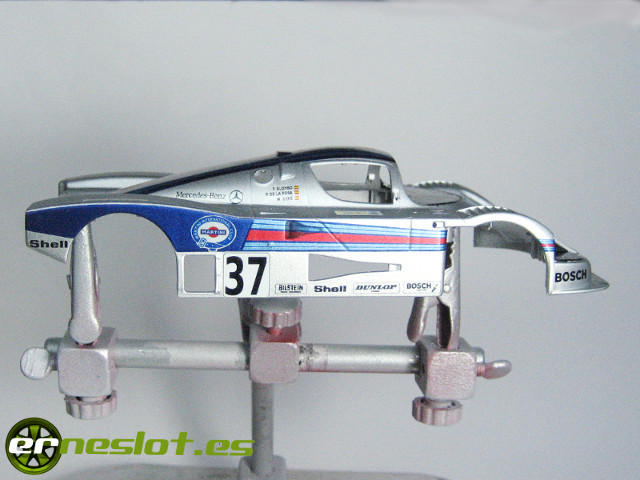 In the rear wing the placement also had no difficulty. 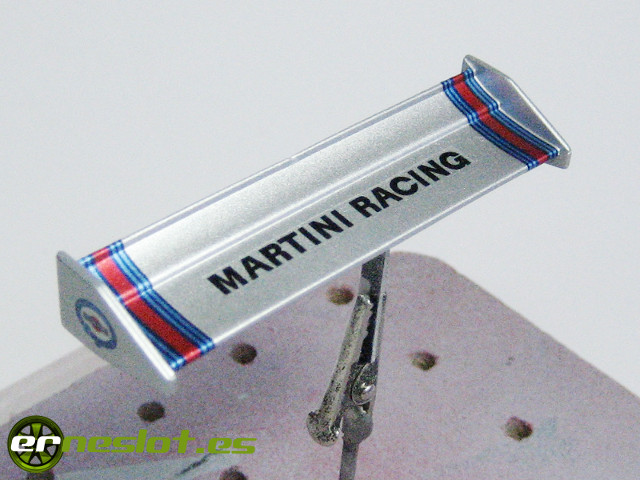 After letting dry the decals completely, apply a generous coat of automotive varnish to protect the decoration in case the car would run on the track. 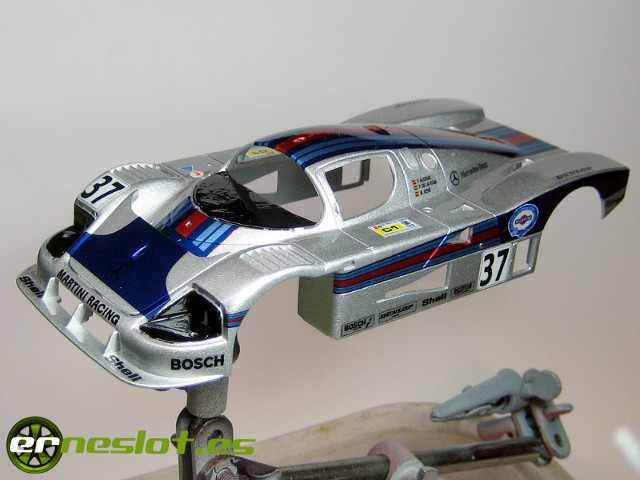 The assembly of the rest of the pieces of the body was very laborious. As you can see in the picture, I use cotton gloves for not to scratch the body and especially to avoid leaving fingerprints when I built the car. I use to weld the most of the parts parts a soldering iron, but in some cases few drops of cyanoacrylate is needed to glue the pieces. I do not like using cyanoacrylate for crystals because the vapors given off can leave them opaque. When Istick a piece with the cyanoacrylate left to dry completely before proceeding with the rest of the work. The work was very laborious as I said, but I like to leave the car as best as I can. 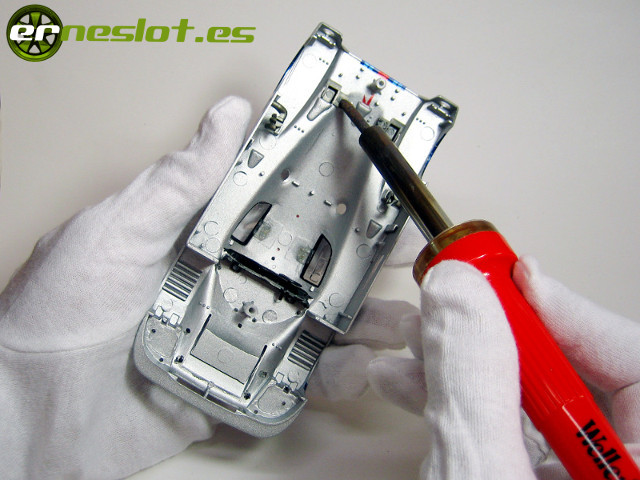 While I was welding the entire collection of little pieces that make up the kit, lights, mirrors, antennas, intermittent ... I realized clearly why Slot.it has the manufacturer category they have. Excellent reproduction of the model, highly detailed and spectacular track behavior. From my point of view, there was a before and after in the world of slot with Slot.it, my congratulations to the manufacturer.

The chassis is race tuned with racing components, all of them from Slot.it. 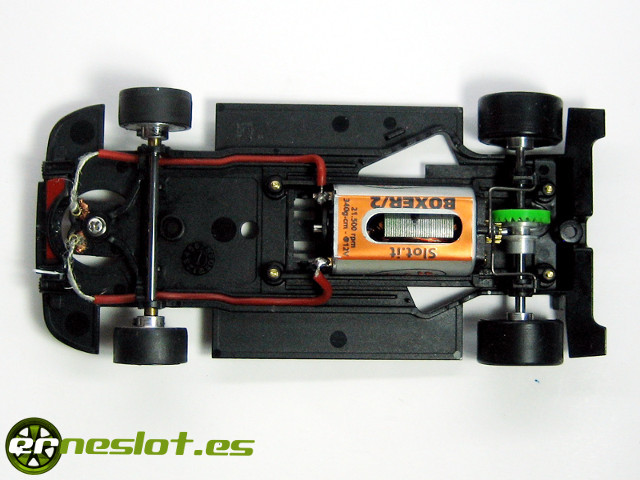 And once all pieces mounted the car looked like this: 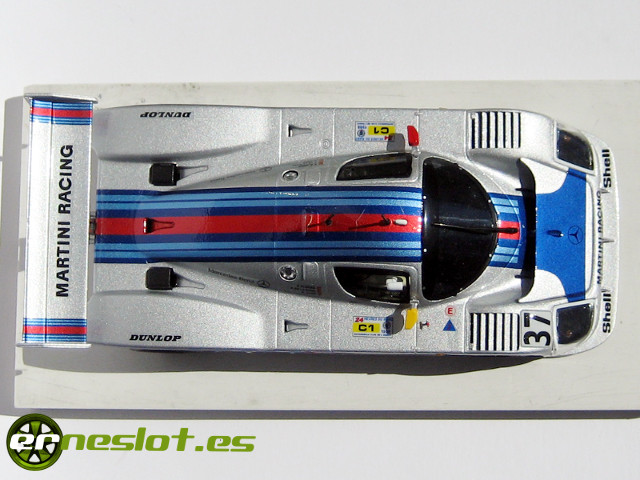 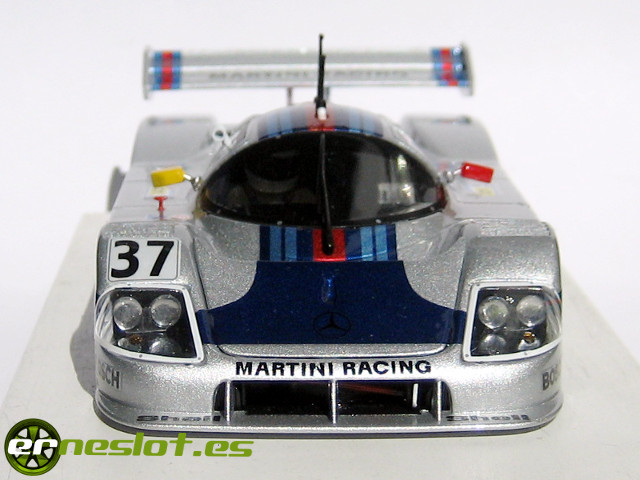 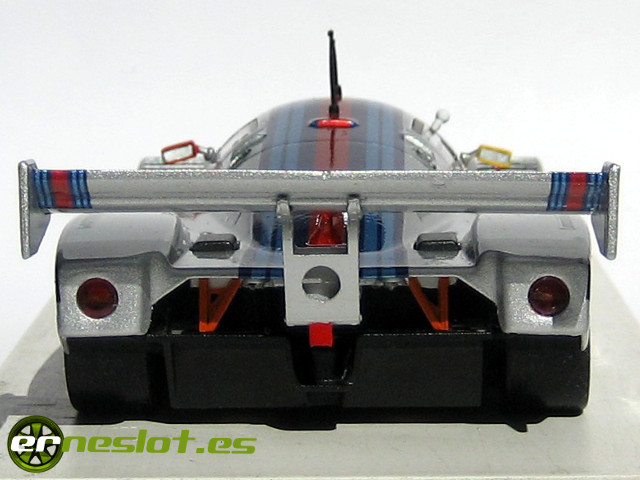 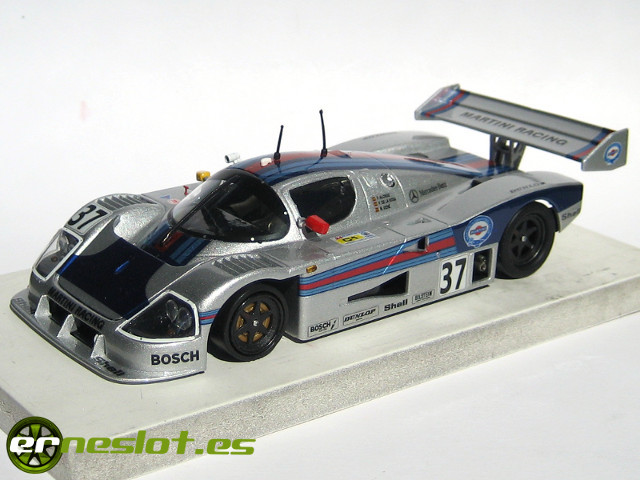 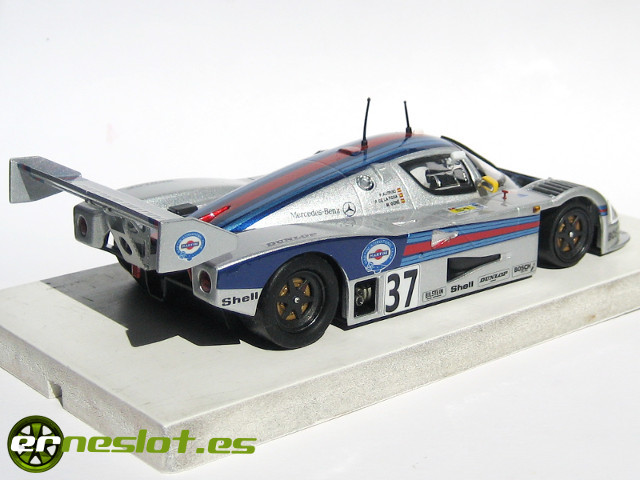 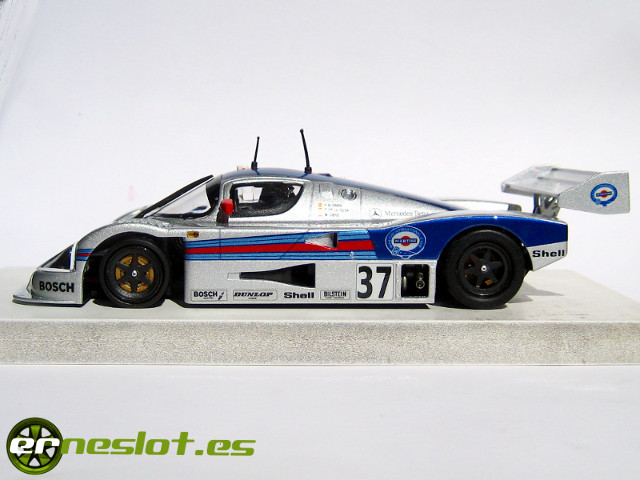 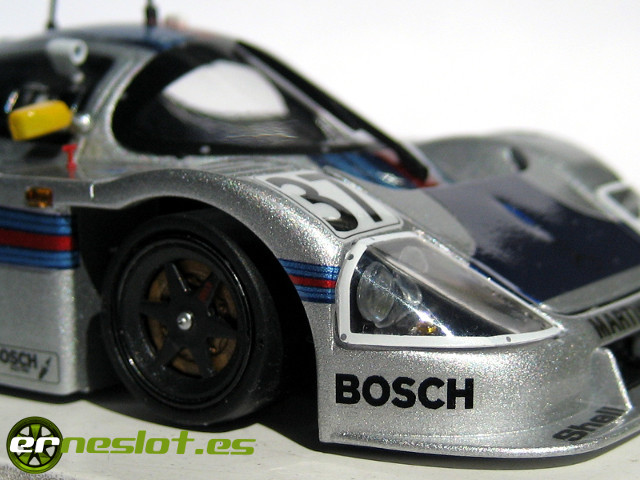 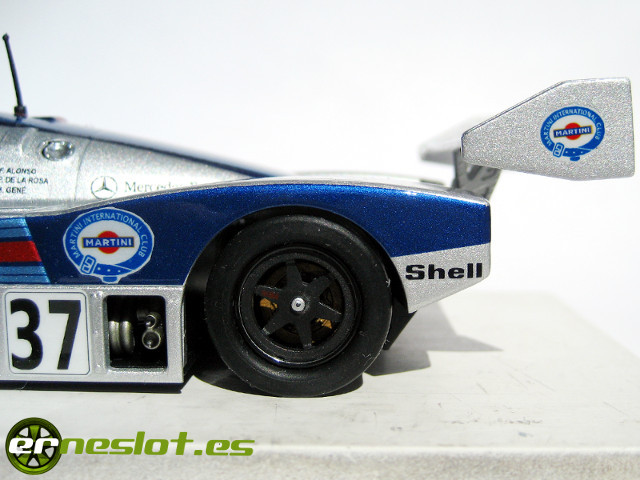 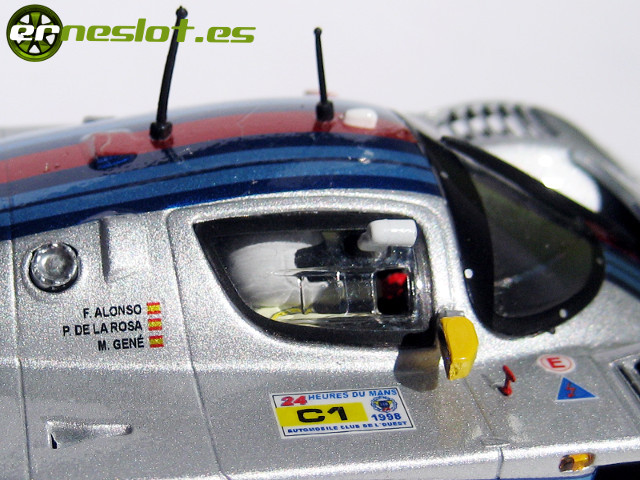 I am very happy with this decoration. I had already made other Sauber C9 with the same decoration, but was varnished with acrylic Vallejo varnish and the varnish spoiled the decoration, decals crinkled a little and some were damaged, so that with this car I´ve removed the thorn that I´ve got stuck, and for sure I do it. I am very proud of the result.

If anyone is interested, the decal sheet with the decor is for sale.