There are some carmanufacturers of cars that remind us of certain models, victories in competition or mythical decorationes. For example, the name Porsche evokes me immediately "911", or when a lover of the competition says "Lancia" to the head comes "Integrale". It also happens with the decorations, when I think of McLaren comes to my head "Malboro", or when I think "Lotus" comes to mind "JPS" but especially the green and yellow decoration of the Lotus 43 or the Jim Clark and Graham Hill Lotus 49 F1 car. This happems with different cars and manufacturers according to our tastes and experiences.

I had been following a slot car that was for sale in the Slotadictos forum, but I had many jobs started and I did not want to go into another one. The car was a Avant Slot Lotus Elise that a friend sold. It was an assembly kit that had begun to decorate and prepare to compete but had been abandoned. When I released some of the work I had pending I got him. This is the slot car as I bought it: 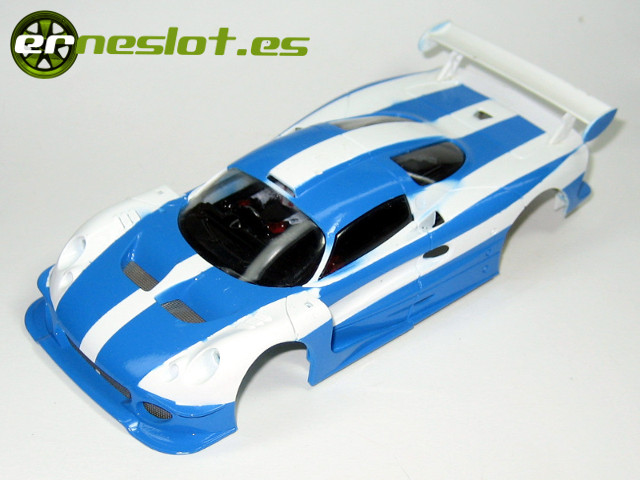 The car was half-assembled, with a decoration based on blue longitudinal lines. Much of the body parts were unassembled and stored in their bags (windows, headlights, interior ...) and the mechanics assembled quality components. Undoubtedly, it is better to start a unassembled model kit, rather than working on a half built one, but this car had some features that made it very attractive to me, especially the mechanics and I decided to buy it. First of all was to dismantle the body completely . Although it was not completely assembled, some parts had a hard time disassembling them since they were stuck with superglue, and I had to separate them carefully by cutting with a blade. Especially complicated was to remove some grids, but with a lot of care and a little work I got the body completely disasemmbled. I stripped the body and the rear spoiler by soaking it in 96° alcohol and rubbing it gently with a used toothbrush, as it was painted with Tamiya acrylic paint, quickly became completely clean, although I had to sand it gently at some points to leave it completely prepared. After cleaning, I applied a coat of Tamiya spray white primer and was ready for painting. Regarding the decoration, as I said above, when I think of Lotus comes to mind the Lotus 49 of Graham HIll, with its green and yellow livery, so that was why I decided. First, I painted yellow the whole body with Tamiya yellow acrilic paint X-8 reference. With the yellow paint completely dried I masked the rear of the car and a longitudinal stripe with Tamiya masking tape and painted the body with Tamiya X-5 green acrylic paint. In both cases, I applied the paint with airbrush. After removing the masking tape the car was as follows: 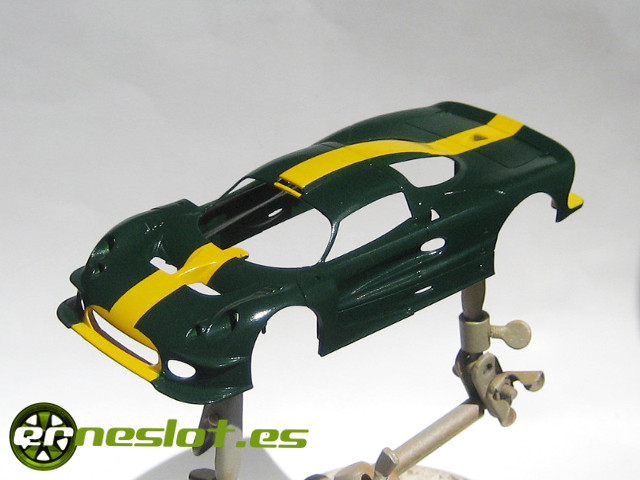 The F1 cars of the 60s were not characterized by very complex decorations, basically based on the colors of the team and few sponsor logos, which were generally related to the motor racing. The sponsorships at a high level had not yet reached the motorsport, but soon they would do it. In this case, apart from the painting scheme, the decorations were complemented by the Shell oil company stickers. I had kept a sheet of decals with various Shell logos from different eras, and I chose one of them from the 60s, just to break a bit the monotony of the model. In addition, I used some decals manufactured by myself of Goodyear tires, but always bearing in mind that the decoration with decals would be scarce. I also used a numberless white circle also from a set of commercial decals. In total I used twelve decals to decorate the car. 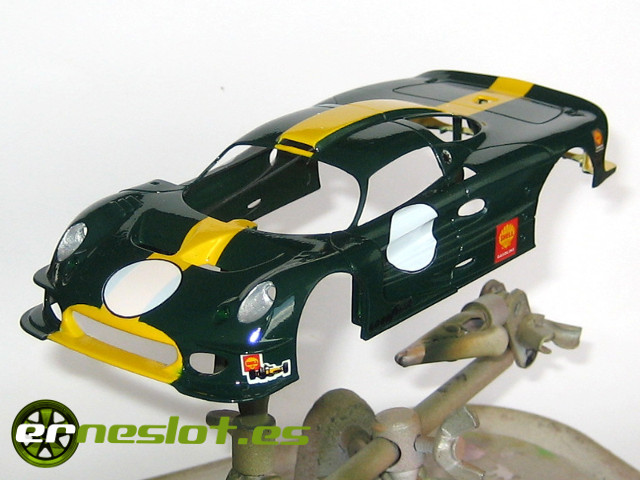 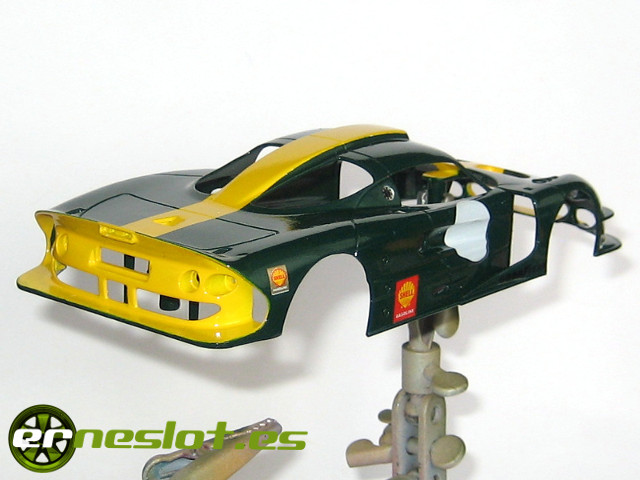 The protection of the decoration was entrusted to a generous coat of automotive varnish.

Of the other parts of the body, the grilles, which were metallic, I left them as they were, while the rear spoiler and the mirrors were painted the same yellow color with which I painted the body. And like to the body, gave them a coat of automotive lacquer. 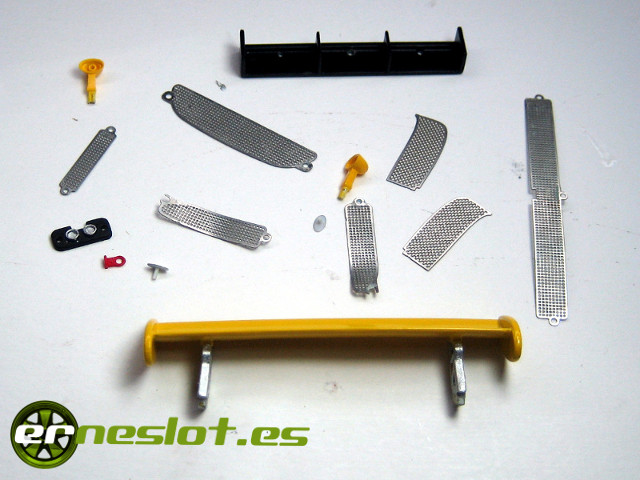 The interior of the kit was practically decorated but completely disassembled, so I only had to mount it and paint the pilot, as it was decorated with a dull white color. 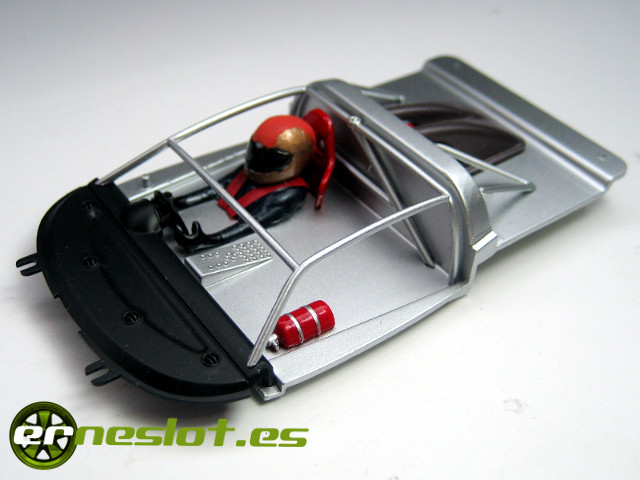 The mechanical components of the slot car are those who came in the original kit in the most of the cases., The original chassis of the kit with a long box in line motor pod. Avant Slot Master motor (20,000 RMP at 12V.) with 10/26 transmission. The guide is from Avant Slot too with silicone cables. For the front axle I used semi-axles, the original tires and rims of the kit and for the rear axle I used the solid axle with the kit plastic rims included in the kit and Slot.it tires. Except for the engine and the guide, all new mechanical components. 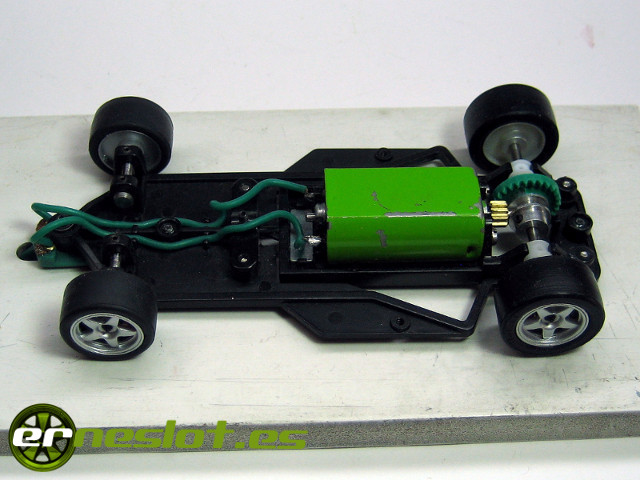 And after respecting the drying times, I assembled all the components of the body and assemble the chassis with this result: 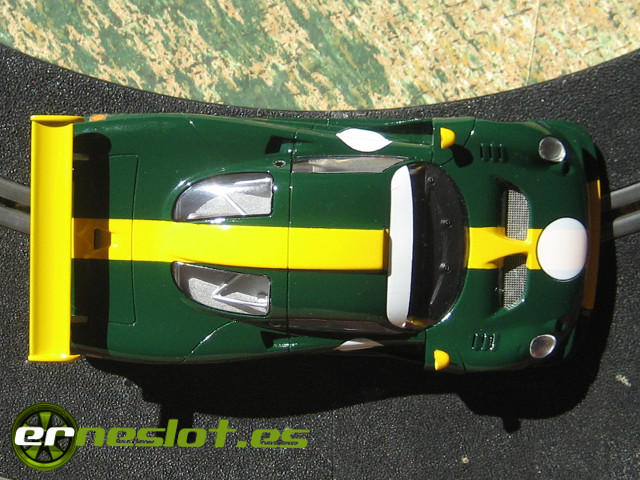 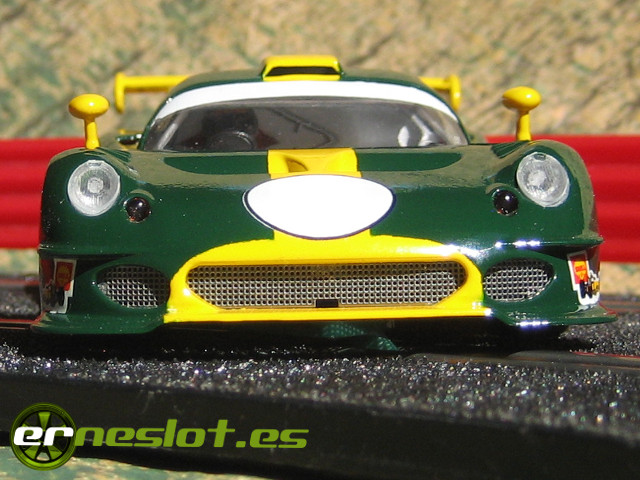 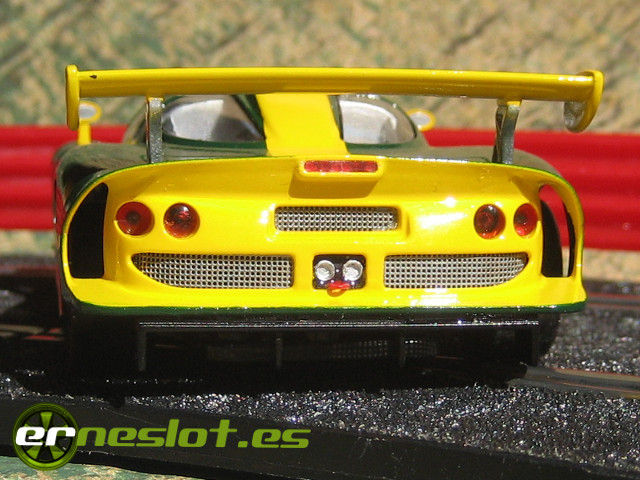 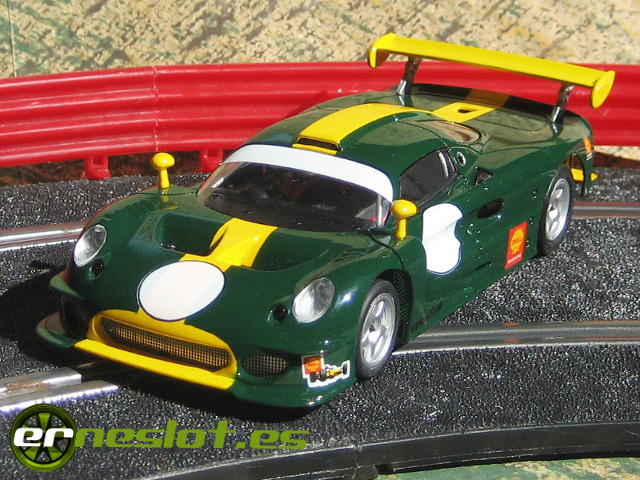 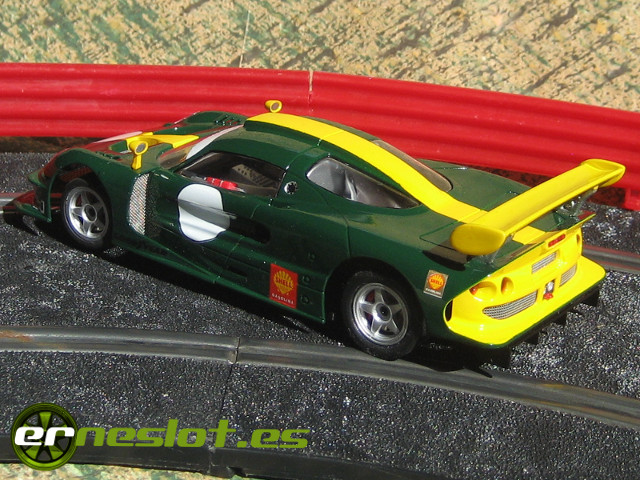 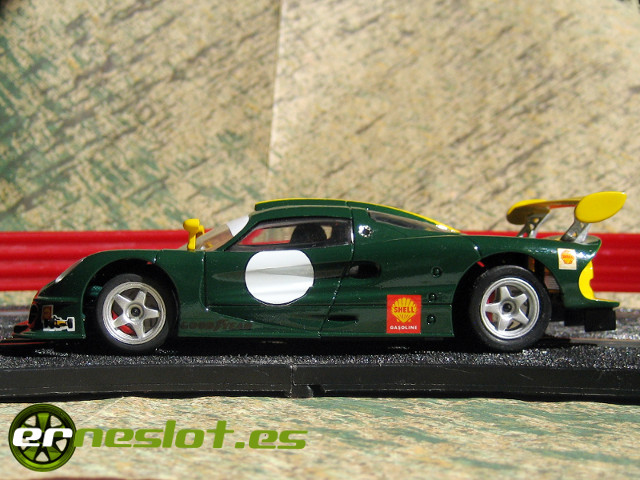 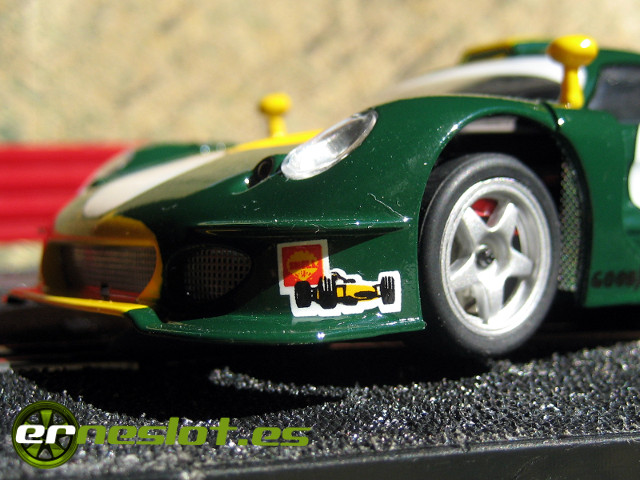 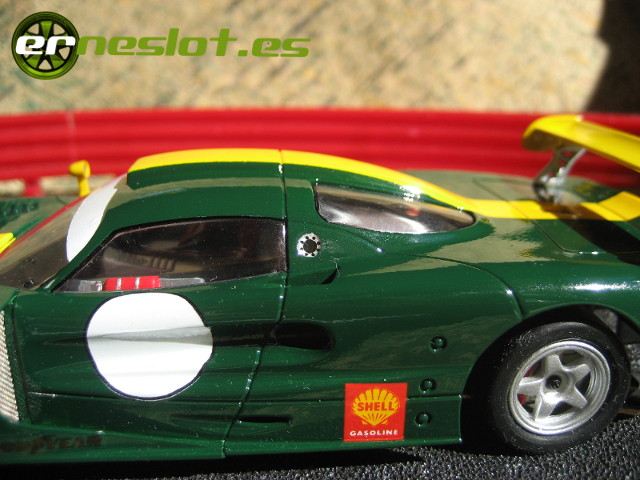 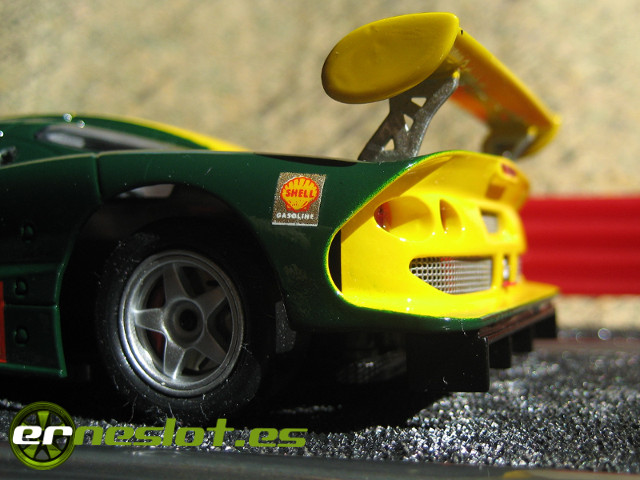 Undoubtedly, some decorations are pretty even on an egg, and this is one of those cases, but this particular car feels great. It may be a rather simple decoration, but the decorations of racing cars of the 60s were like that and had nothing to do with the decorations of cars from the mid-90s to the present day. And let´s not forget that it is a phenomenal way to recover a car that we had abandoned, and surely some will have parked there, isn´t it?