Back in 2007, the extinct slot car manufacturer Sloter Minimodels released some white assembly slot car kits fitted with MB Slot racing equipment, on the one hand the Lola T280 and on the other the Ferrari 312PB. I bought a Ferrari kit and as it happens many other times, instead of assemble it and enjoying a nice car on the track I left it stored in the drawer. Thus, a few years went by until in one of the "cleanings" of old material I found the body of the Fly Car Model Porsche 917K to which I adapted the Avant slot chassis and as it happens so many times, one thing leads to the other and I decided to make two cars with the same decoration as I did with the Porsche 908 and Lola T290 of the Repsol team that you can see in this link.
I don't have any image of the Sloter kit as I bought it but searching the internet for some images like this: 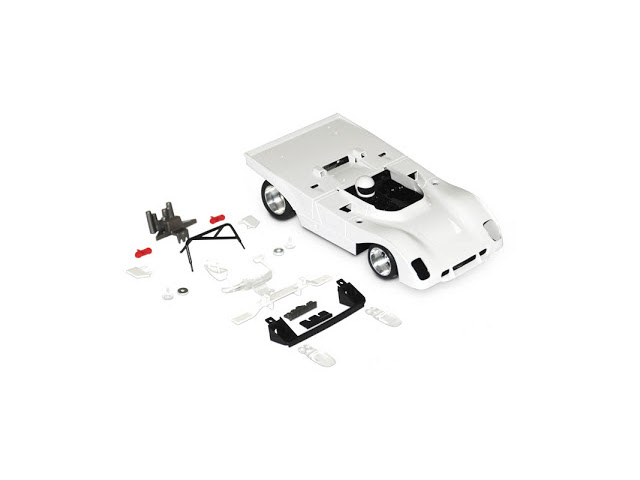 As I was doing the Porsche 917K in "Shell" livery, I thought to make this car with the same livery, in the style of the Fly Car Model "Team Shell" box (reference S24) limited edition. The first step was to glue the two parts into which the body was divided by and apply a coat of Tamiya white primer spray. 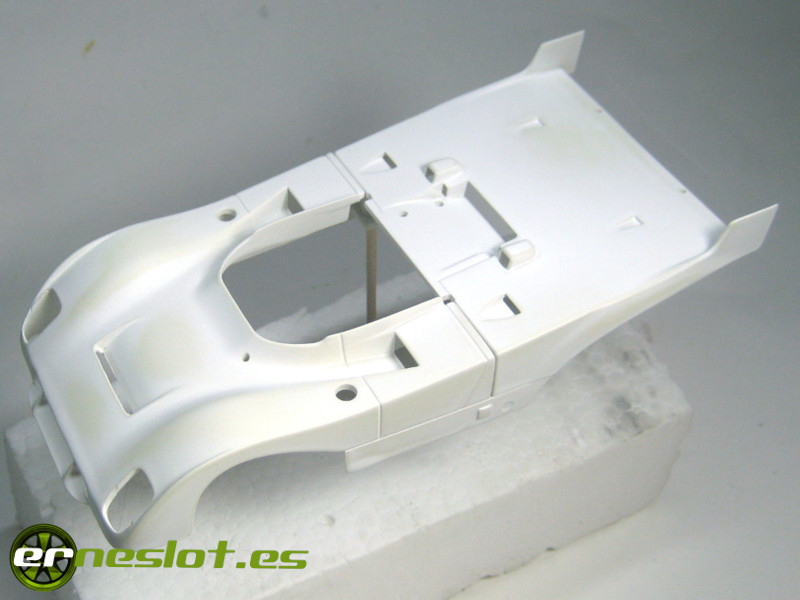 After giving it a gentle pass with waterproof sandpaper, I applied two coats of lemon yellow acrylic paint reference X8 from Tamiya with the airbrush. 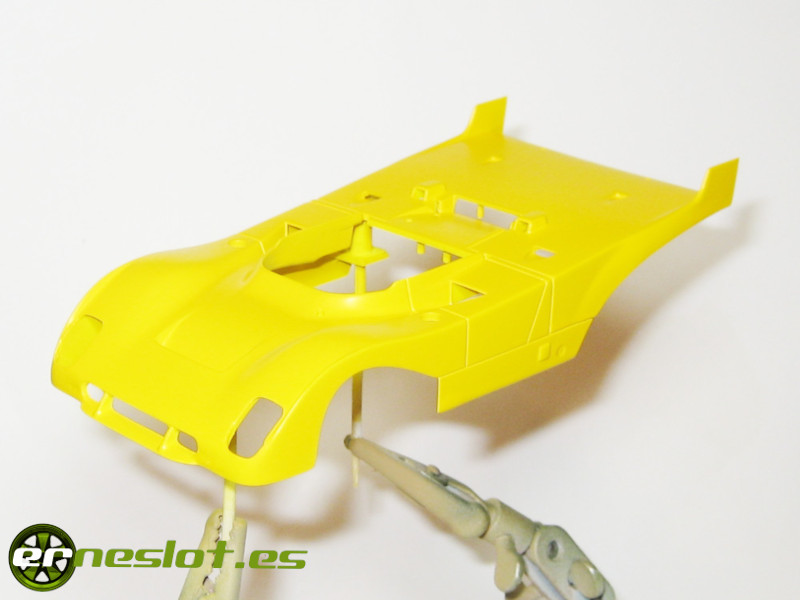 After letting the paint dry well, I will mask the body to paint the parts that would be painted red. The tone of red chosen was Tamiya´s X7 applied with the airbrush, in the same way as the yellow color. 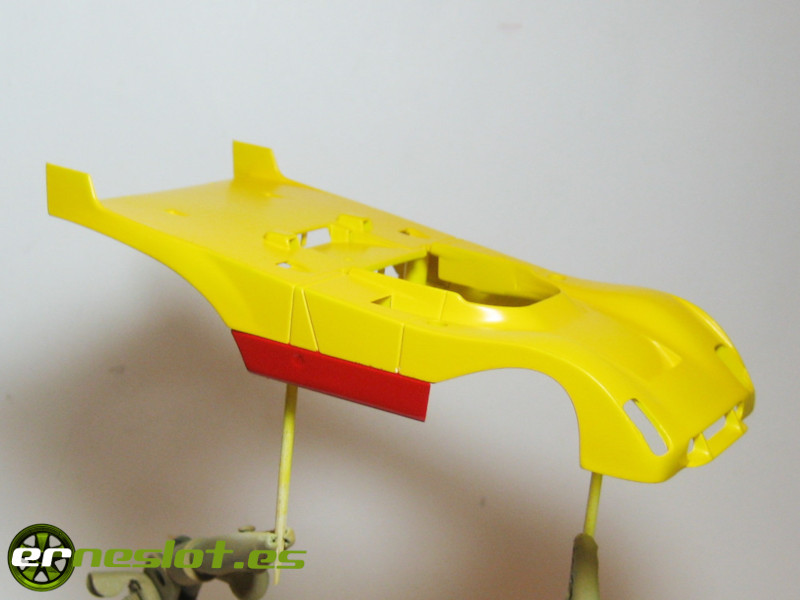 As I did with the Porsche 917K Shell, I used remains of homemade and commercial decals to make the decoration, with this result: 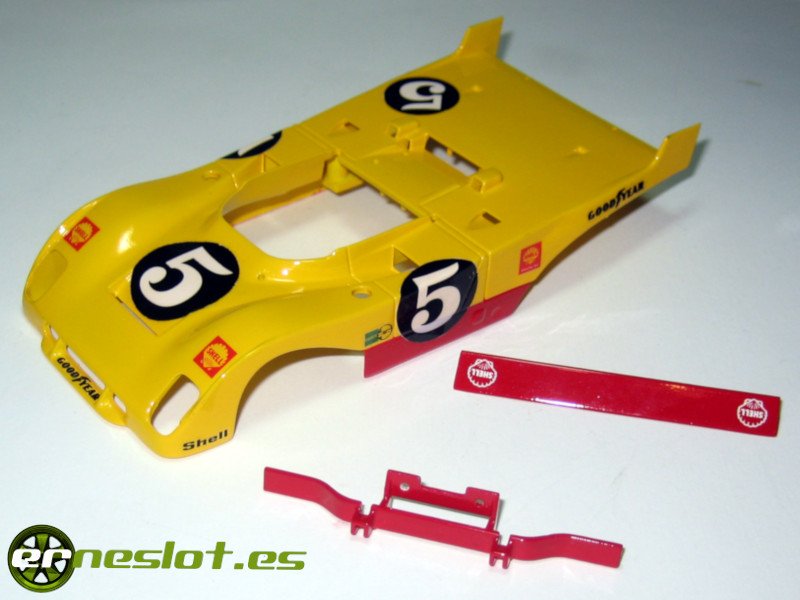 The interior of the model is a black thermoformed lexan tray, widely used in racing slot cars but quite ugly. 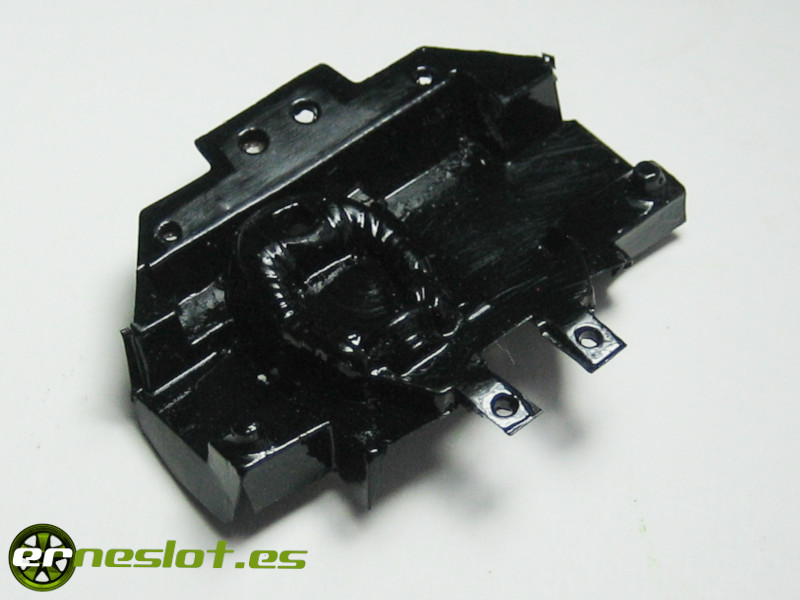 To enhance it a little bit, I painted it metallic gray (reference X11 of Tamiya) detailing some parts, as you can see in the following image: 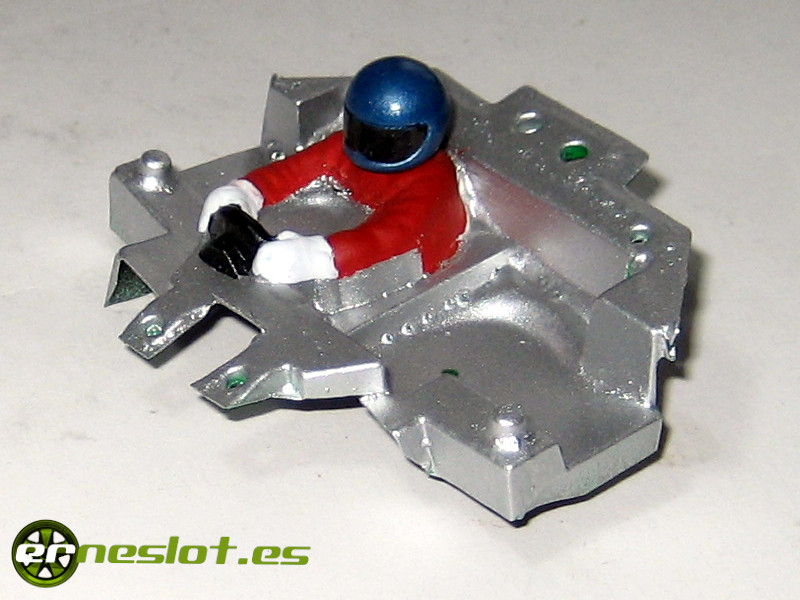 For the wheels, I used the same technique as with the Porsche 917K "Shell" ones: 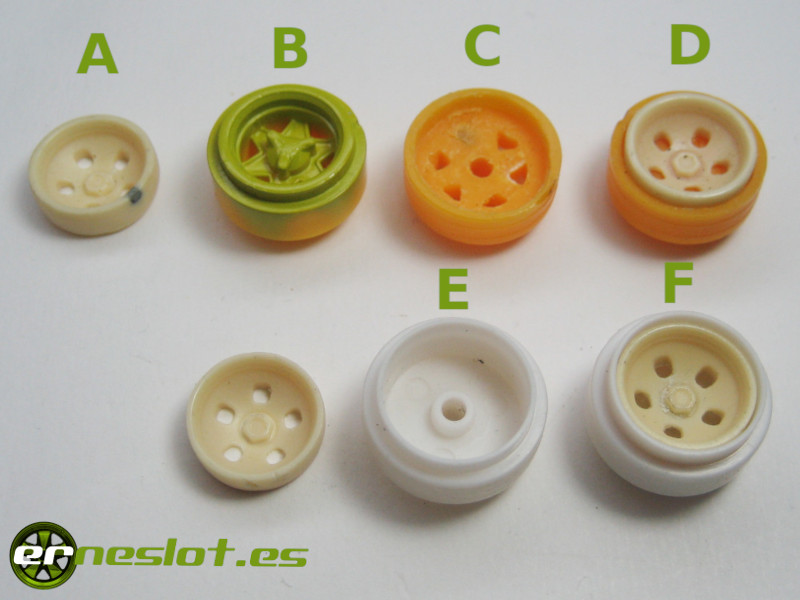 After gluing the inserts, I applied them a coat of golden paint (Tamiya X12 acrylic applied with the airbrush) and then a coat of automotive varnish when the paint was completely dry. And they were thus placed in the chassis along with the rest of the car mechanics. 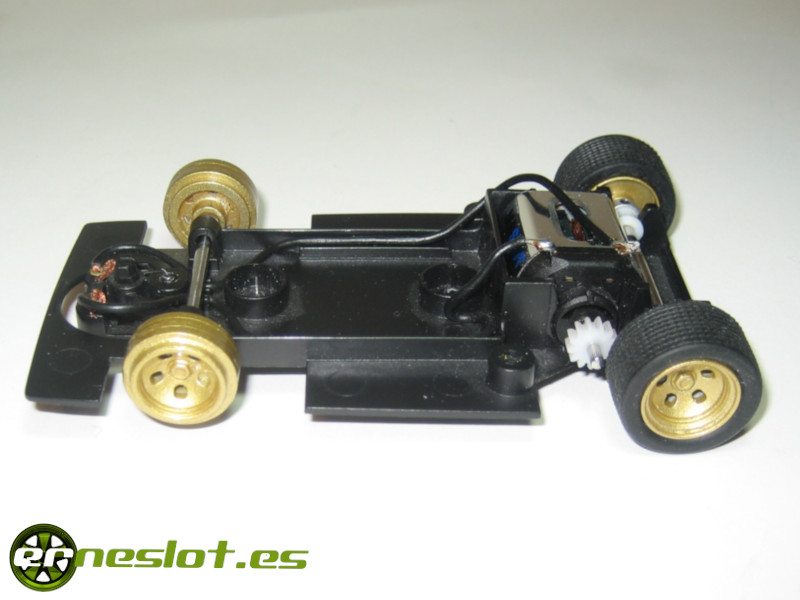 Regarding the mechanics, I mounted the MB Slot components included in the kit, such as the Krahs 23 motor with a 13-tooth pinion and a 32-tooth crown, in addition to the calibrated axes and the guide. For the tires I chose some of Cartix (reference 1127A) for the rear wheels with a similar drawing to the tires that mounted the classic sport cars, and for the front axle Scalextric wheels turned and lowered (although in the photo they are not mounted).

All that remained was to assemble all the body parts and screw the chassis so that the car looked like this: 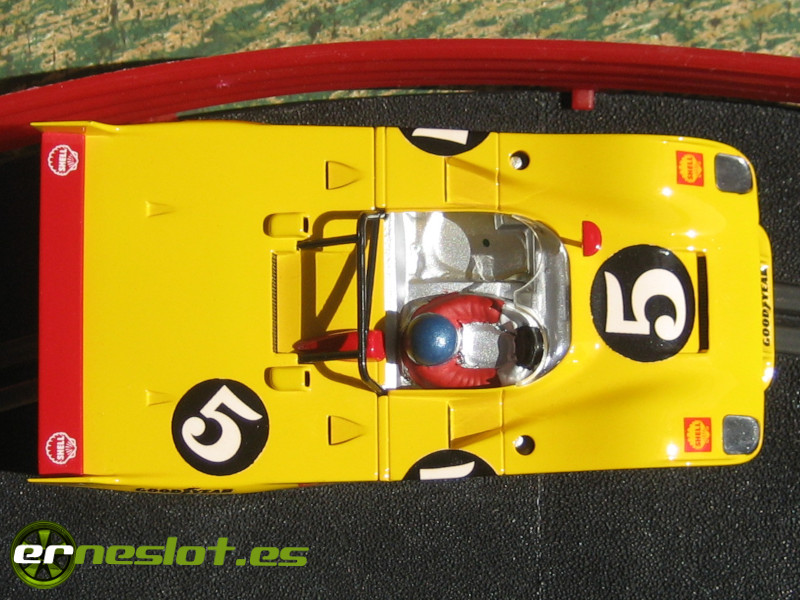 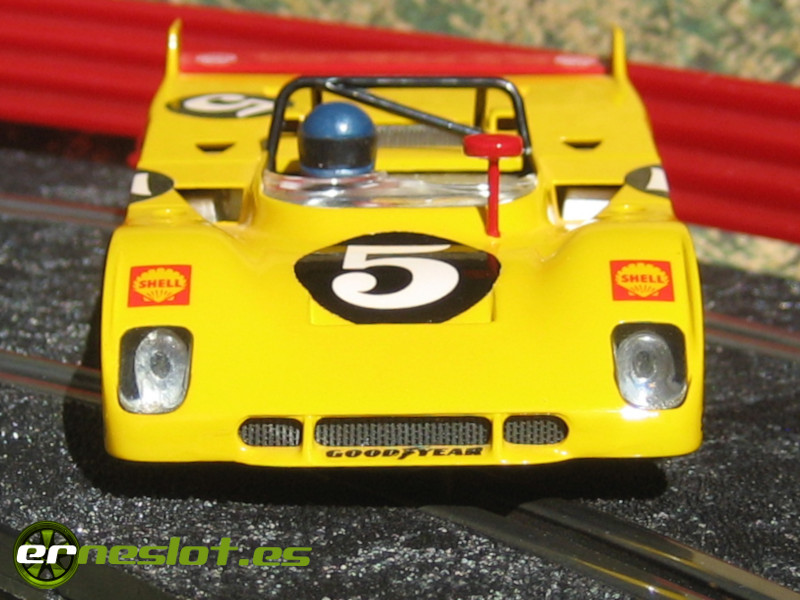 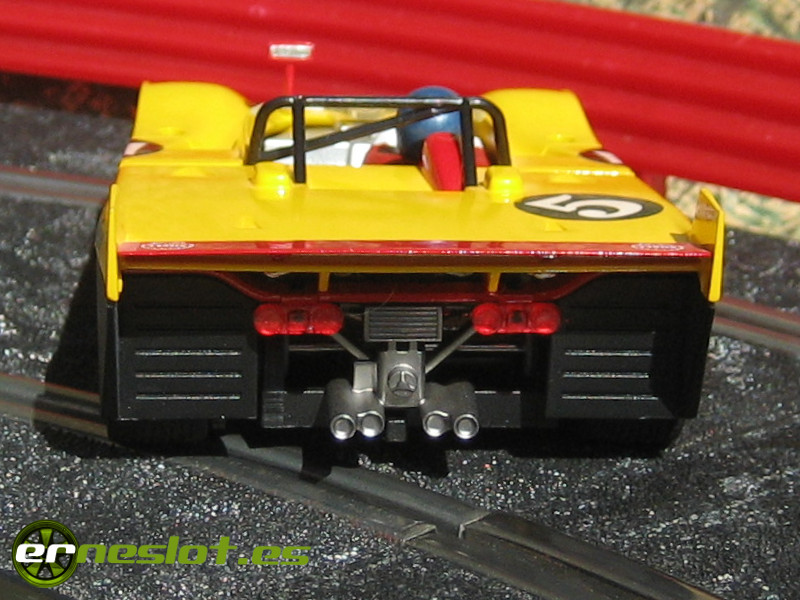 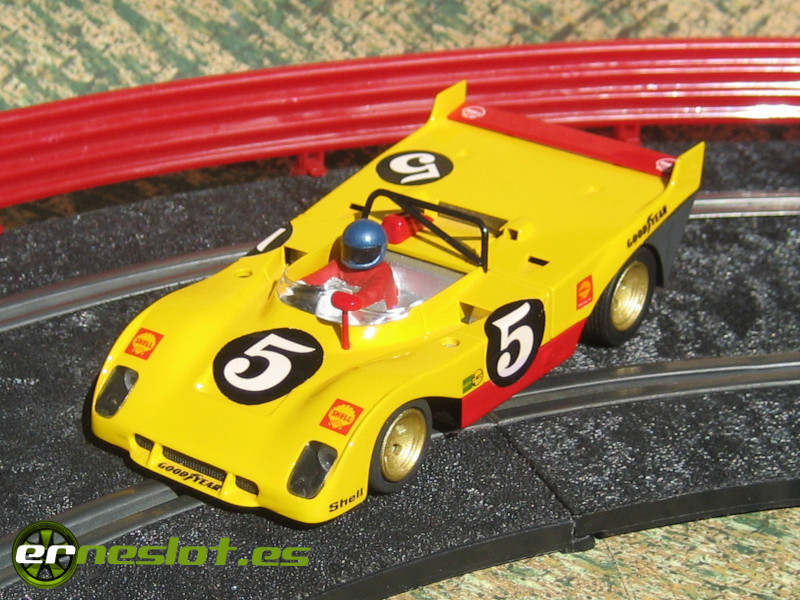 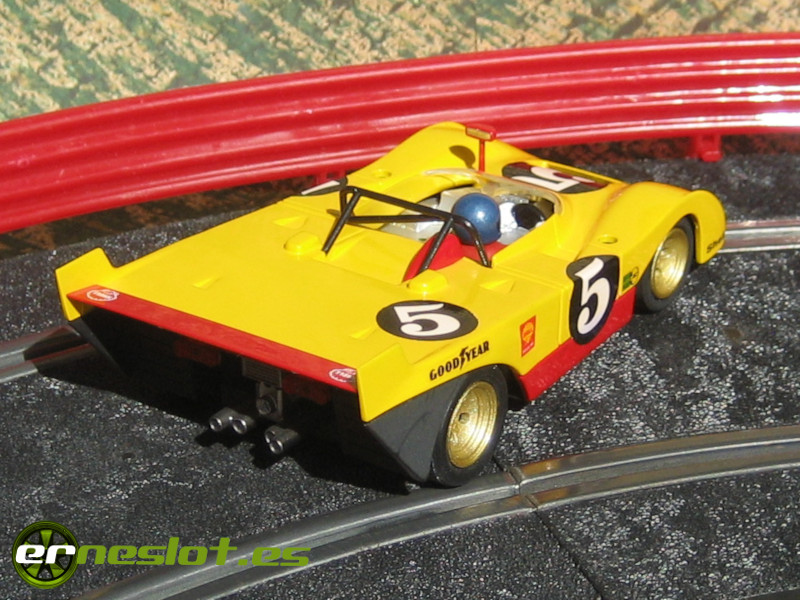 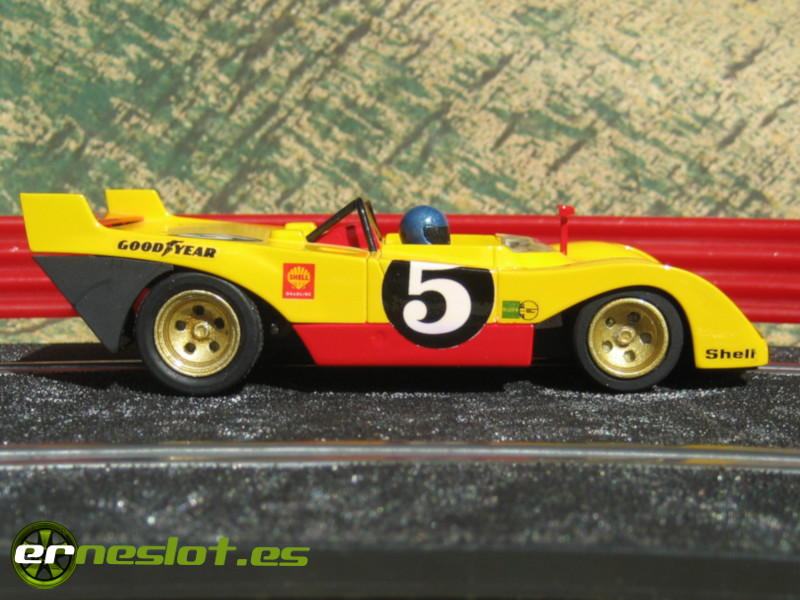 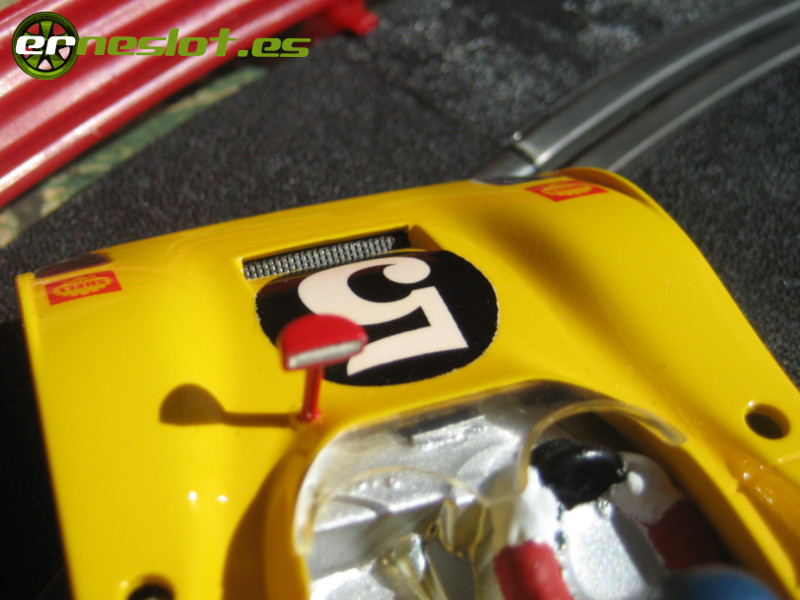 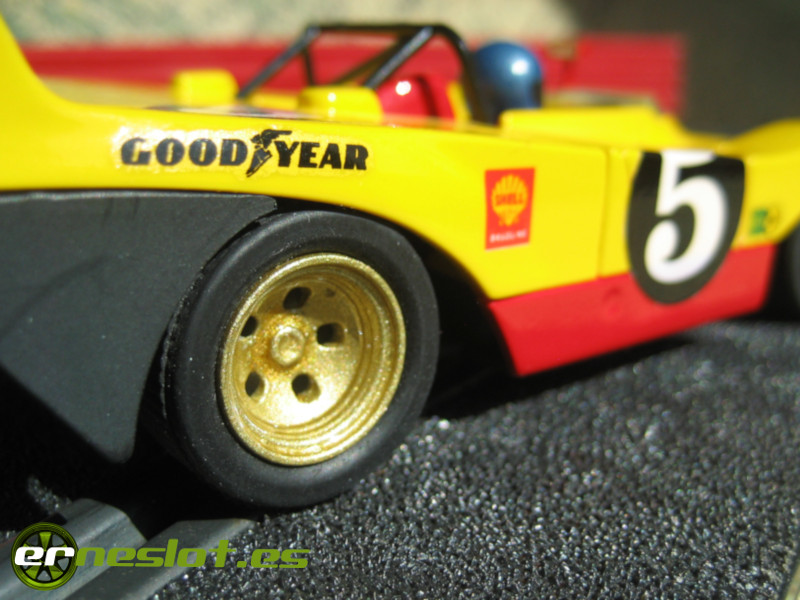 The Sloter kit is quite good, and the mechanical components that it includes are of the highest quality, so that soon after we put a little care when decorating it we will get a good work. These works are very satisfactory, they are simple decorations but if the decoration is well chosen and the car is beautiful, with little work you can get very colorful cars, as has happened with this 312PB.
Although the Ferrari process appears here, I really made the Porsche 917K "Shell" and this car at the same time. The good thing about making cars in series is that it saves us a lot of work especially when it comes to painting and decorating, since there is practically no difference between painting a bodywork of one color or painting two or three in the same way, so that in instead of being a major complication for me it was a time saver.