The following work that I present arose almost without thinking about. One day in the store where I used to go to buy slot cars they had a Fly Car Model BMW 3 Series in Racing version. The BMW 3 Series body E46, is one of the good reproductions that made Fly Car Model if we overlook details such as the wheel arches and the front bumper, both too large for my taste, although the rest of the reproduction is honestly good, with some very well made lines and some impressive model details.
The "racing" version of the BMW 320 did not have the usual complete interior that Fly provided his cars "for the showcase", replacing it with a thermoformed lexan tray with a figure of driver and co-driver (essential because it is a rally car) with their plastic helmets molded into two separate pieces. The chassis also changed, replacing the standard chassis with front engine for a chassis with indentent motor pod with suspension, a pretty good chassis that improved the behavior of the car on the track an enormity. To be honest, even if the chassis had been one piece with a fixed pod, the simple fact of placing the engine in the center would already improve the behavior of the slot car, but the racing chassis of Fly is very good. 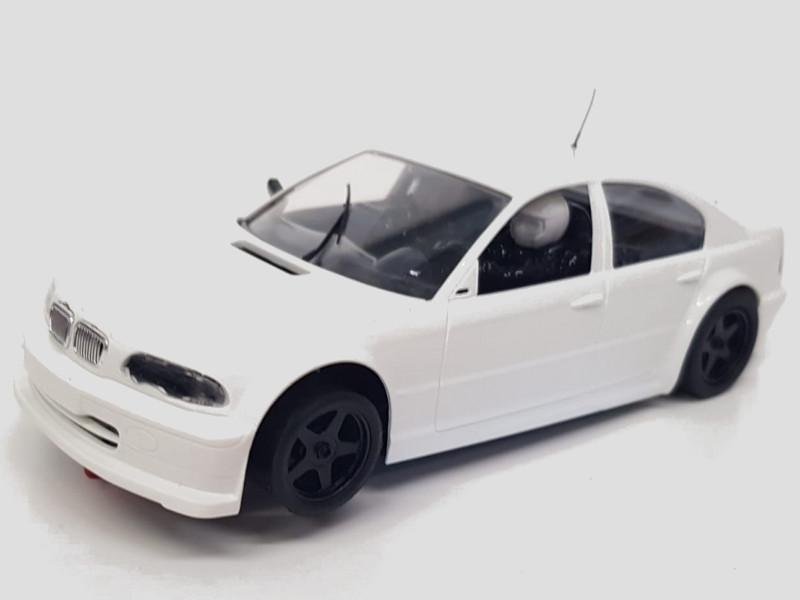 Out of curiosity, I was looking for information on the Internet about whether the BMW 3 Series E46 had participated in rallies but I did not find anything especially interesting, apart from some sporadic participation in a regional rally, so it can be said that the car was never used in first line rallies although Fly will release a version as such. This isn´t something that worries me, with this slot car I will not participate in any rallyslot race, and less with the restrictive regulations of the rallyslot races of a time to this part.

Regardless of looking for information about the car, the decoration was clear to me from the moment I bought the car, it would be inspired by the decoration of the BMW Alpina 2002ti with which Vasek Polak, who managed a BMW dealership in Hermosa Beach (Califonia), competed in several races of the SCCA between 1971 and 1972. 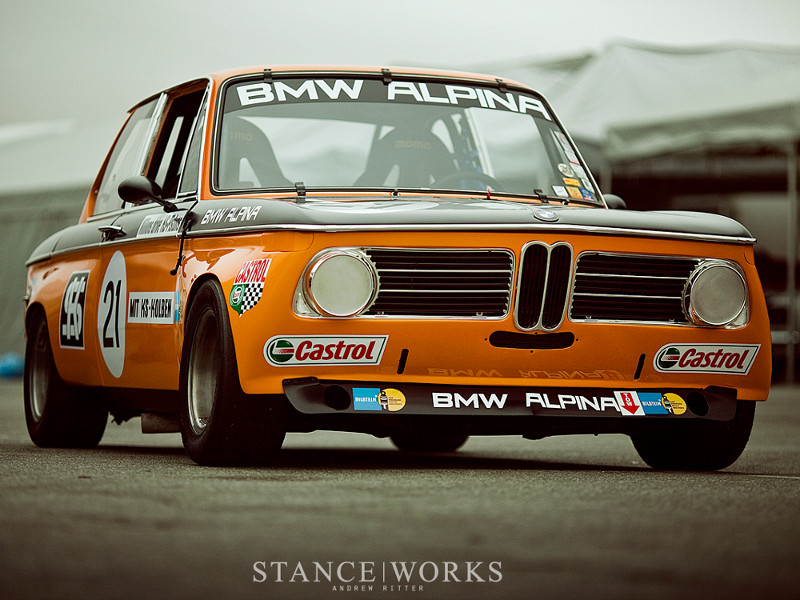 If you want to know a little more about the history of this car you will find it on the stanceworks.com website, along with many more photos of this beautiful car.

The process of decorating of this car will not go to the annals of the history of decoration since the scheme is very simple. Actually the car has been used to use half-finished paint cans that I had and practice masking, which is a technique that I have used little and therefore I do not have much practice. After a smooth pass with a fine sandpaper and a coat of spray primer I painted the body with the satin orange color that I had left over from the mixture with which I painted the 1973 Porsche 911 RSR. 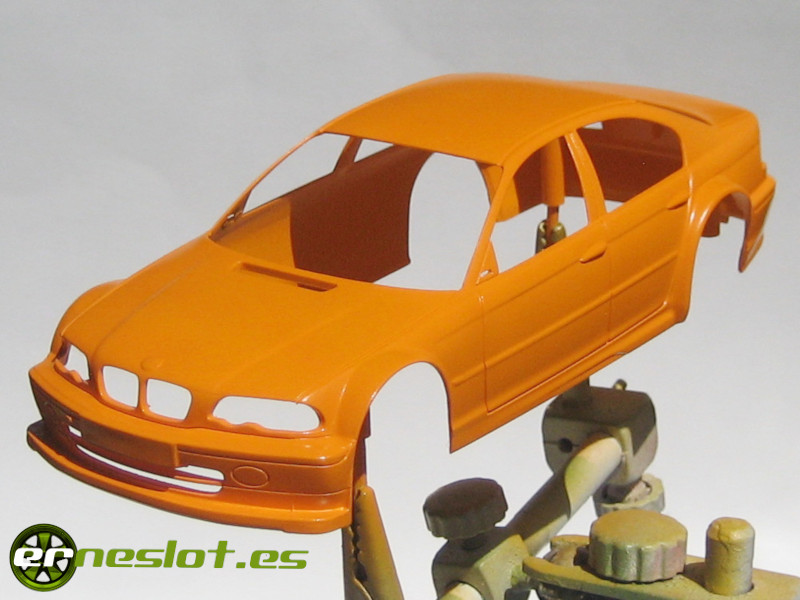 With the orange paint very dry, I masked the hood, the lid of the trunk and the sides to paint them with matt black (acrylic X-1 Tamiya applied with the airbrush). At some points, the masking was not good enough and some black paint was added. To correct these errors, I removed the black paint a little by scratching with a toothpick moistened with water. It did not remove all the black paint but at least it was better. 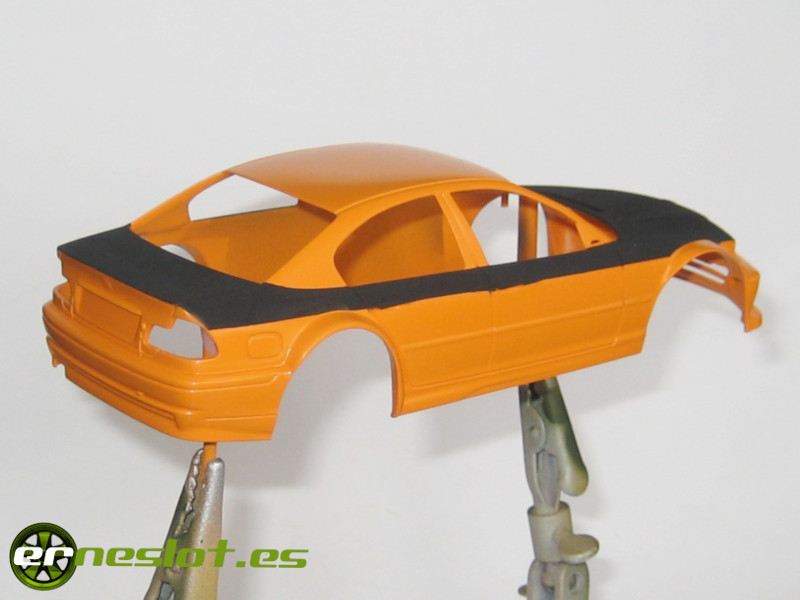 After letting the paint dry completely I placed the waterslide decals. The decoration is inspired by the orange BMW 2002, printed over white decal paper to which I included some more decals with a fewlogos that I had saved from the remains of previous works. When they were very dry I applied two hands of automotive varnish to protect them.

Regarding the varnish, from one time to this part to all the cars that I always decorate I give them two coats of automotive varnish. For the first coat I try that the car and its decoration is well covered but I don´t mind if it´s not perfectly applied. After allowing the varnish to dry between 3 and 5 days, maybe some more, I usually do not hurry to finish the car, I lightly smooth the body with 1200 grit sandpaper. It is not necessary to be waterproof sandpaper of this particular grit, but it must be superior to 1000. The automotive varnish is so resistant that unless we are very rough, it is difficult to spoil the decoration, either the paint or the decals, but we must be careful. At some points it may even be necessary to use sandpaper with a coarser grit, 500 for example, to remove specks of dust or similar that have been stuck to the varnish. In any case, the sanding process will be very smooth and always with sandpaper moistened with water. When the body is well sanded, the time of the process will depend on the imperfections and how well applied the coat layer of varnish was, wash the body with a soft sponge and dishwasher and dry the car, if necessary helping me with a hair dryer without heating the body so much (very important) and apply the second coat of varnish, this time trying to get a well applied coat, homogeneous throughout the surface and without obvious defects (perfection is impossible). Once the process described above was completed, the BMW bodywork was like this: 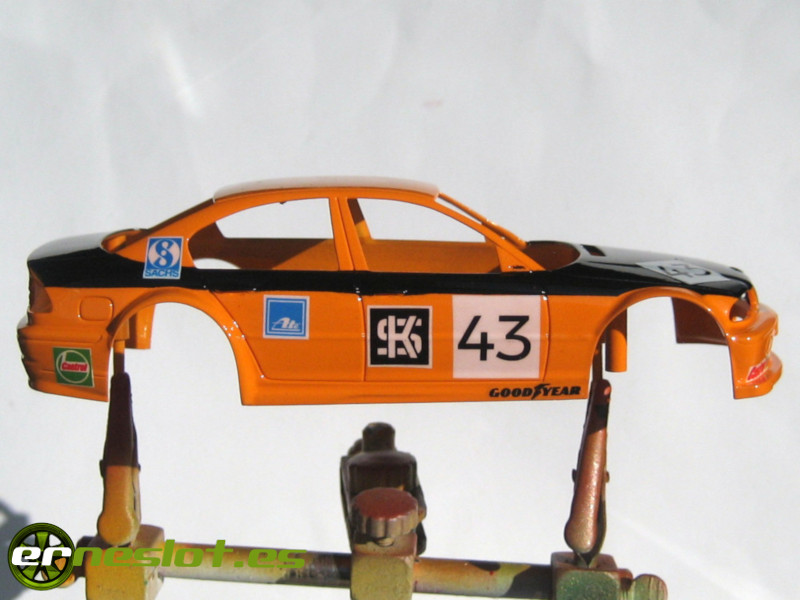 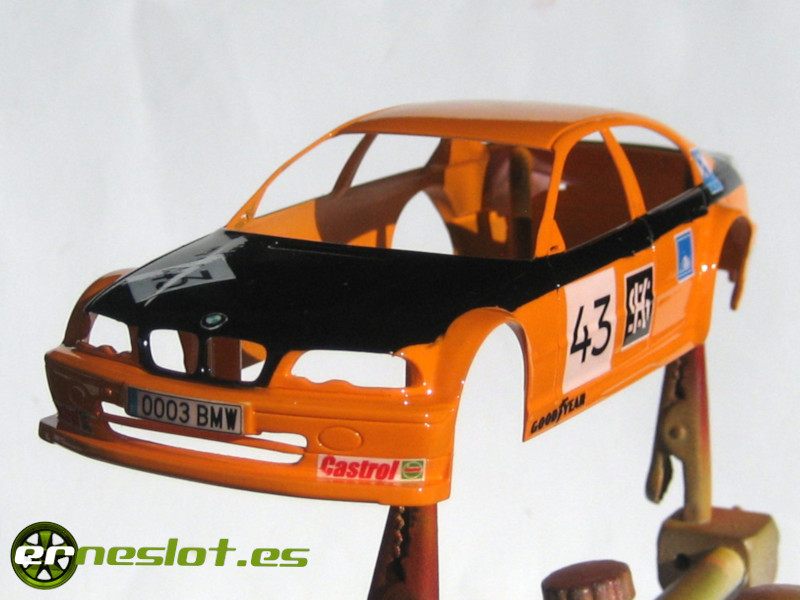 With the varnish completely dry, I put the rest of the components of the body, which being a car for racing, were quite few, the hood grilles, mirrors and the front and rear optics. Regarding the front optics, although the next photo does not appear, once placed, I painted them on the inside with translucent yellow paint (X-24 Tamiya reference) to highlight them a little more, and especially because I really like how they look. 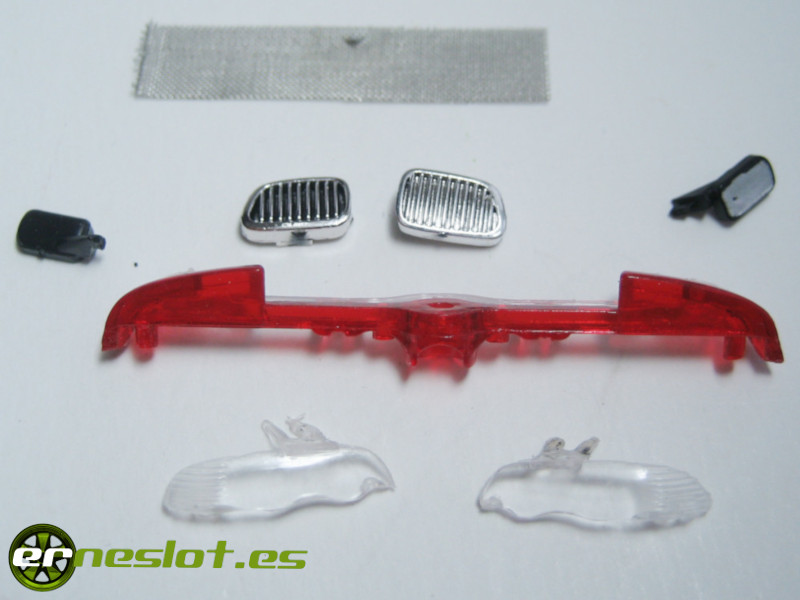 The car came with a completely transparent glass, but I had saved a BMW 3 series scrapyard that I bought for a project that I have in mind and it had painted the windows and windshield. To adapt a bit to the decoration of the car, I gently sanded the windscreen umbrellas and after masking it I painted it again with a coat of Tamiya X-2 white paint applied with the airbrush. A decals with "Castrol" logos finished the work on the windows. 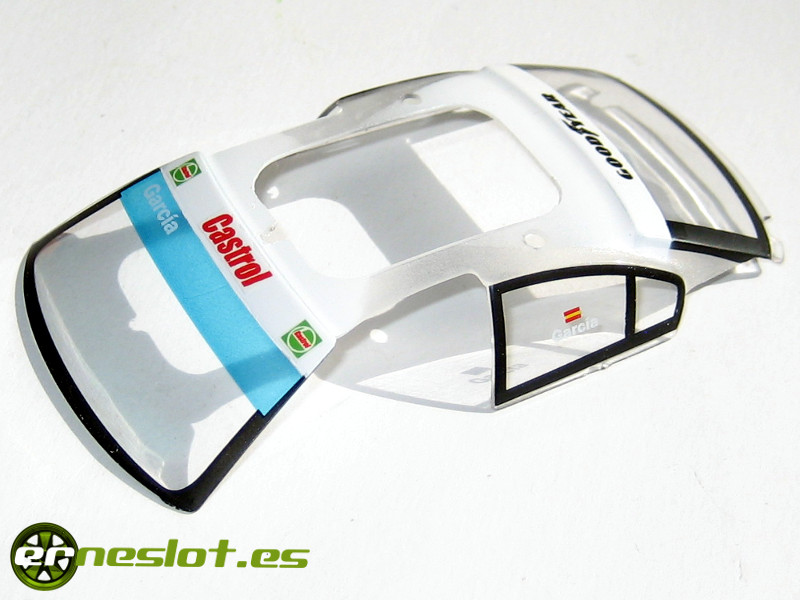 As in most cars destined for racing, the original complete interior of the car is replaced by a thermoformed lexan tray with driver and co-driver helmets made of a piece of plastic subsequently glued. As in the racing cars on a 1:1 scale, all in the interest of maximum performance. On this subject I will write about, but I advance that I do not like it anything. You lose part of the charm of a slot car and there is a middle ground between a heavy hyperdetailed interior and a lexan tray where you must imagine what each part is, although fortunately in this case at least the helmets are an independent piece of rest of the tray so we can detail something more.
But the problem of lexan trays is not limited to its simplicity, but decorating them is a problem, and is because the paint we usually use for our models does not give good results to decorate them, as the acrylic paint or enamel does not get well over the lexan trays. To achieve a better result, after sanding softly the lexan tray with a very used water-based sandpaper, I applied a coat of Tamiya polycarbonate spray, in this case a pretty ugly green color, but I did not care because the intention is to use the polycarbonate paint as a primer. This is the result of the polycarbonate paint sprayed over a tray for test: 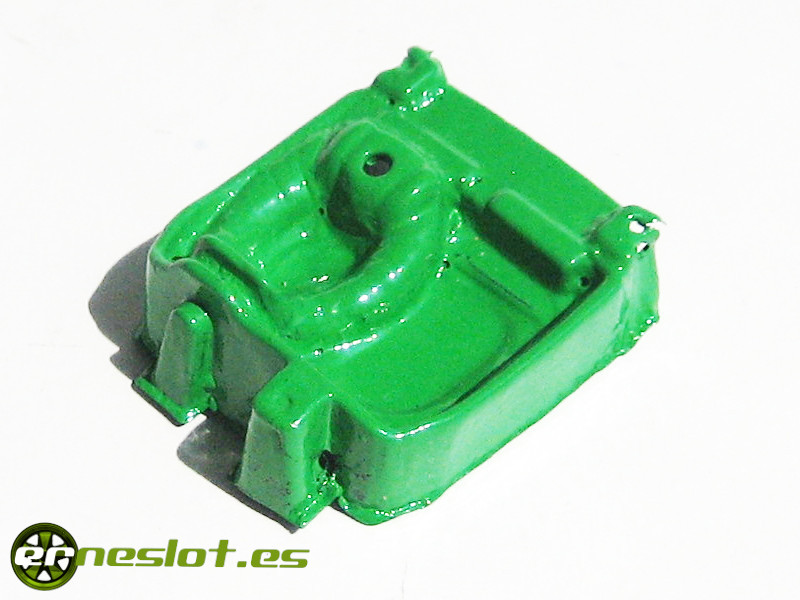 The paint for polycarbonate is a very special paint, very thick despite being a spray. When applied on the lexan gives impression of leaving a very thick coat that doesn´t cover much and with a gummy appearance. When it dries, the paint coat becomes thinner and details appear that seemed to have been lost with the newly applied paint, but the rubbery feel remains. In some way it is logical since it is a painting that must have a lot of flexibility so that it stays well adhered to the surface. For the interior of the BMW, I applied two hands, although really with only one coat would have been enought. After letting it dry completely, I gave it a soft pass with sandpaper to eliminate some imperfections and leave the surface ready for later painting.

To highlight the interior, I painted it metallic gray (Tamiya X-11 reference with the airbrush), the dashboard with matt black color (Tamiya acrylic X-1), also applied with the airbrush, painted the driver and co-driver with a brush with matte acrylic colors by Tamiya, except the helmets, which I painted with bright colors. To give it a little more colourfulness, I stuck some strips of isulating tape to simulate the seat belts. I do not like lexan trays at all, but at least it has been more colorful than the original black tray. 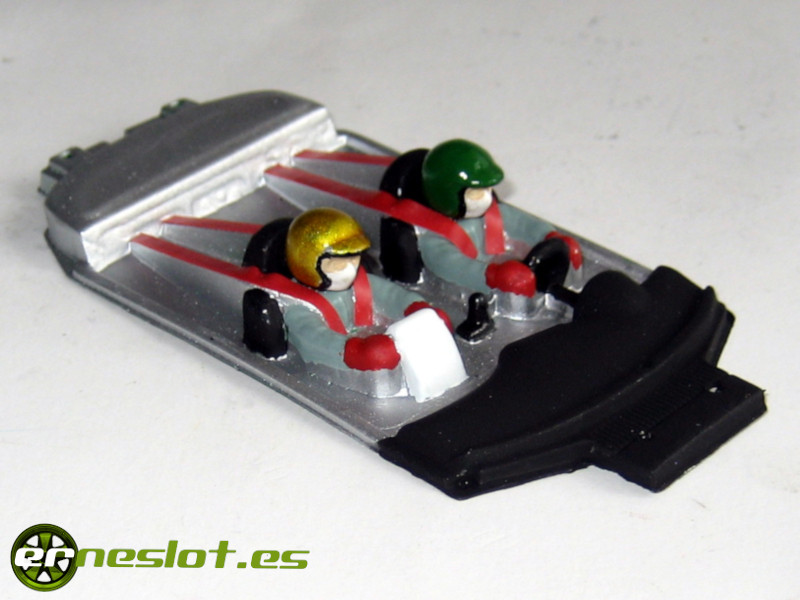 To finish, it was only to decorate the wheels of the car. The original slot car included some pretty nice 5-spoke wheels but I did not like it for this specific slot car. To get closer to the Alpina rims of the car I was being inspired by, I took advantage of some Slot.it multi-spoke wheels inserts, painted in black, and then finished with Citadel satin spray, which gives a very nice finish. As I did not want to compromise much the behavior of the slot car on the track, for the rear axle I chose a pair of 15.8 mm. of diameter SCX aluminum wheels inside which I placed the inserts that I had painted. For the front axle I placed a pair of Avant Slot plastic wheels, the same diameter as the rear to which I painted metallic gray and applied a coat of varnish. Prior to the painting process, I prepared the inserts to fit correctly on the chosen rims. For the rear I did not have to do anything because they fit perfectly, but I had to lower the diameter a little bit to the inserts of the front tires to fit them inside the plastic rim, and lower its height slightly to place them inside the rim. With all this work, the wheels stayed like this: 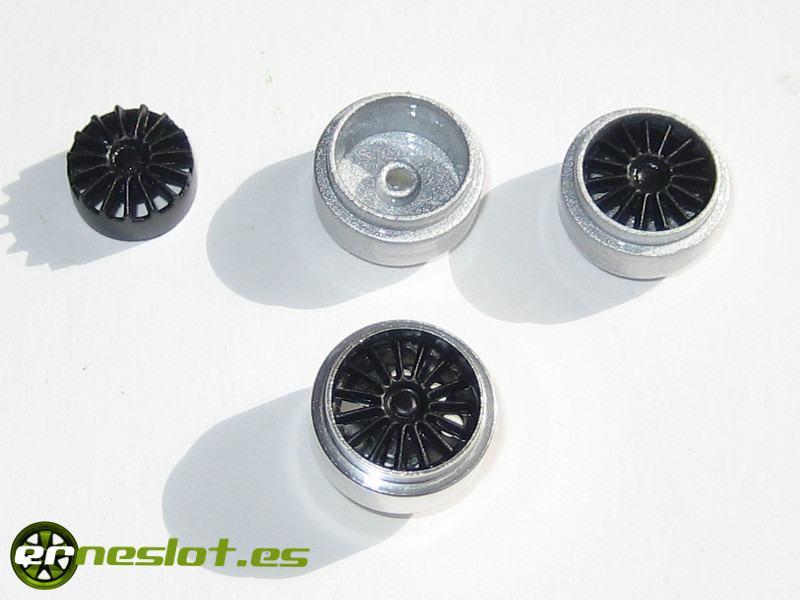 The rest of the mechanical components are the originals of the car but to reduce the the suspension travel of the pod I placed in the screws that hold it a piece of the silicone cable sleeve, the same way I did with the Lola T290 with Avant Slot chassis. 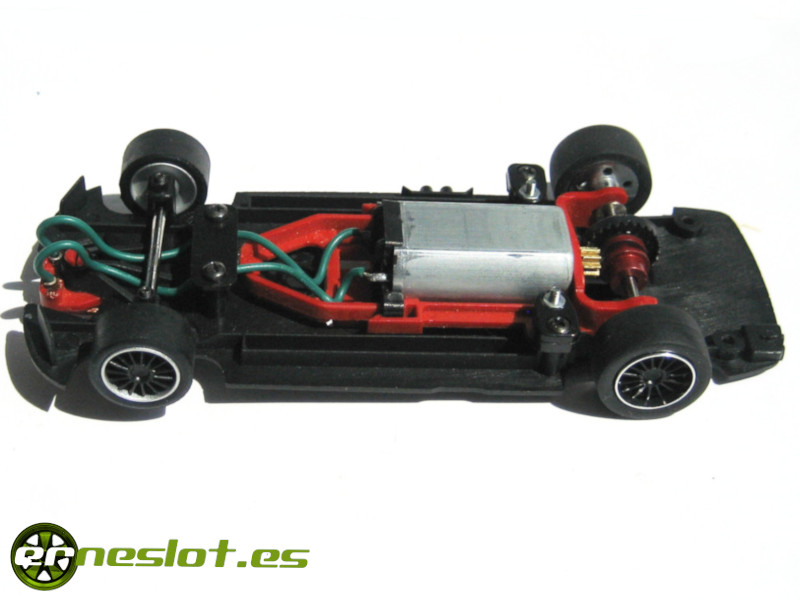 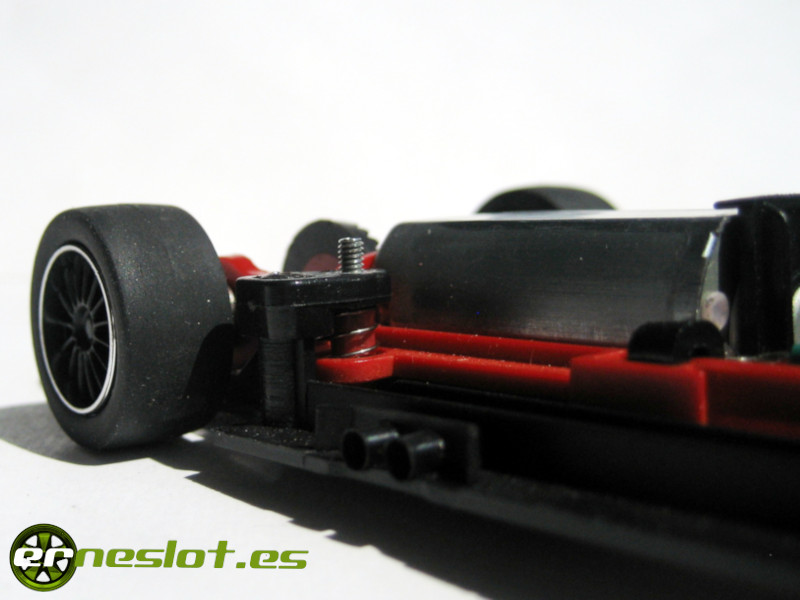 It only remained to fit chassis and bodyshell so that the car would remain in this way:: 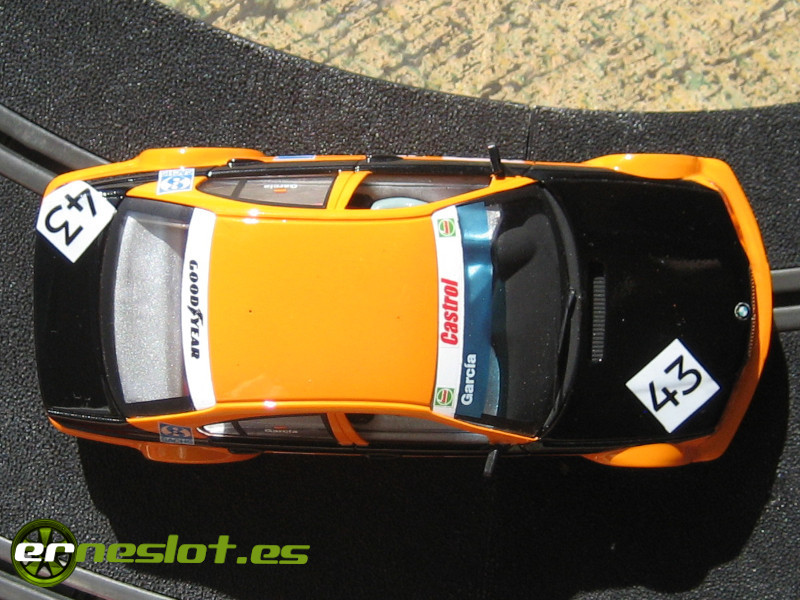 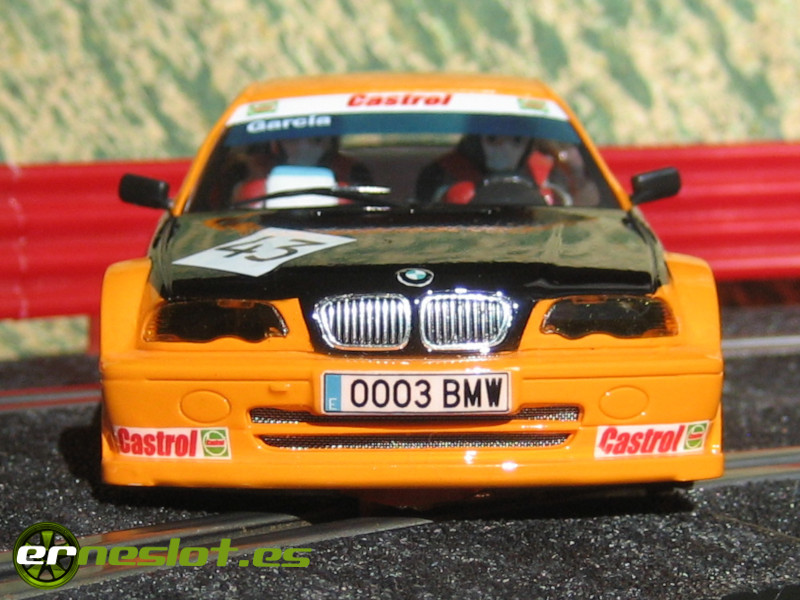 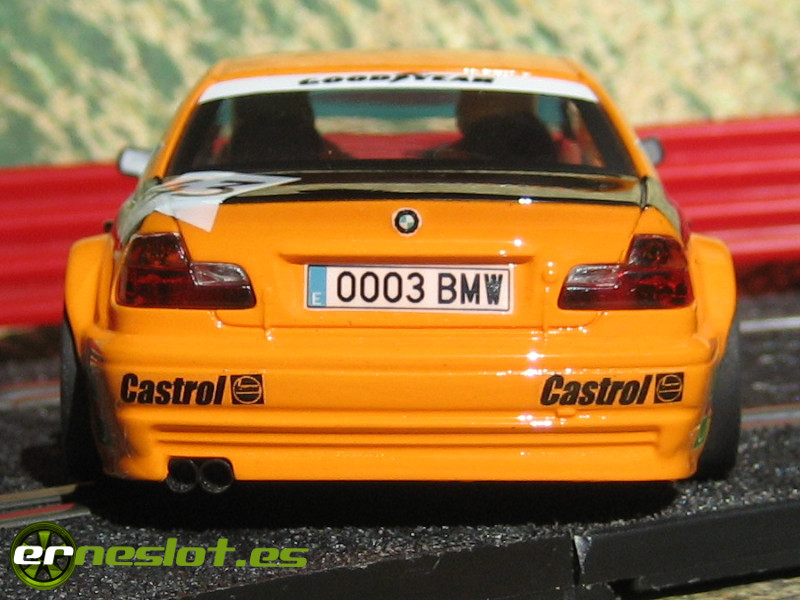 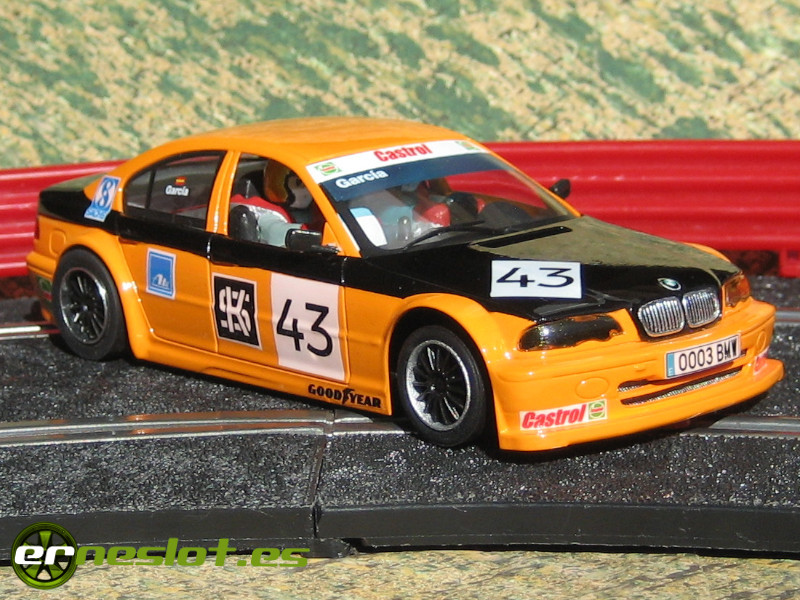 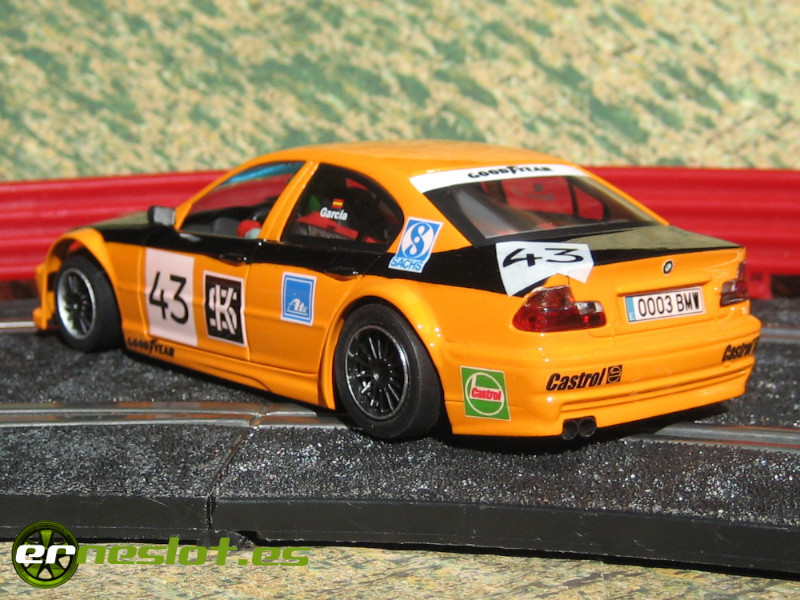 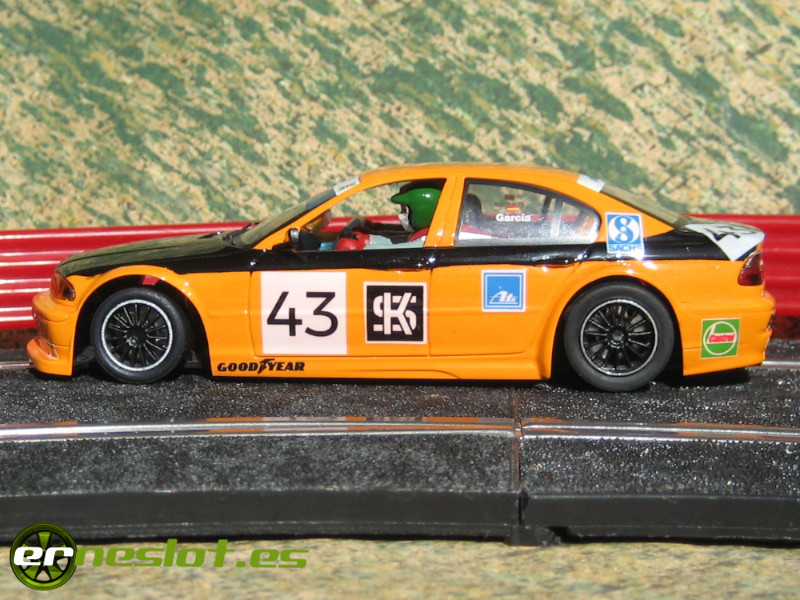 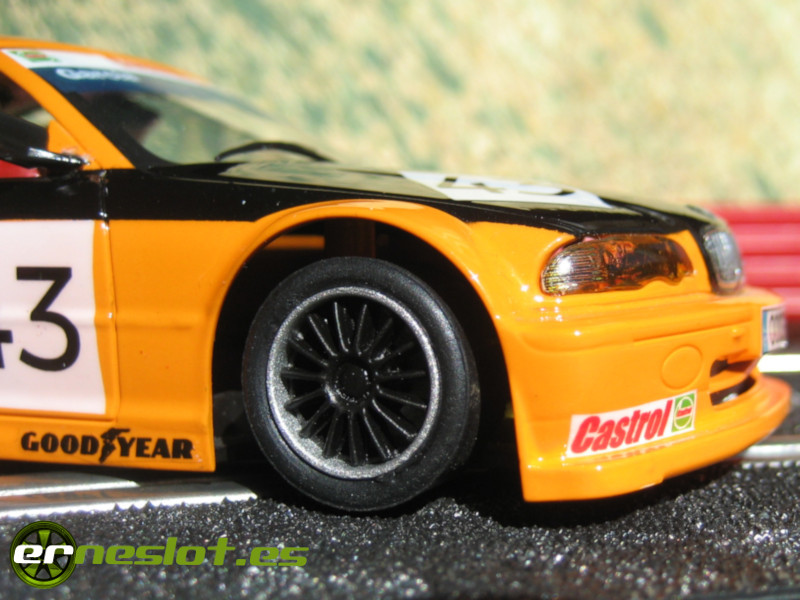 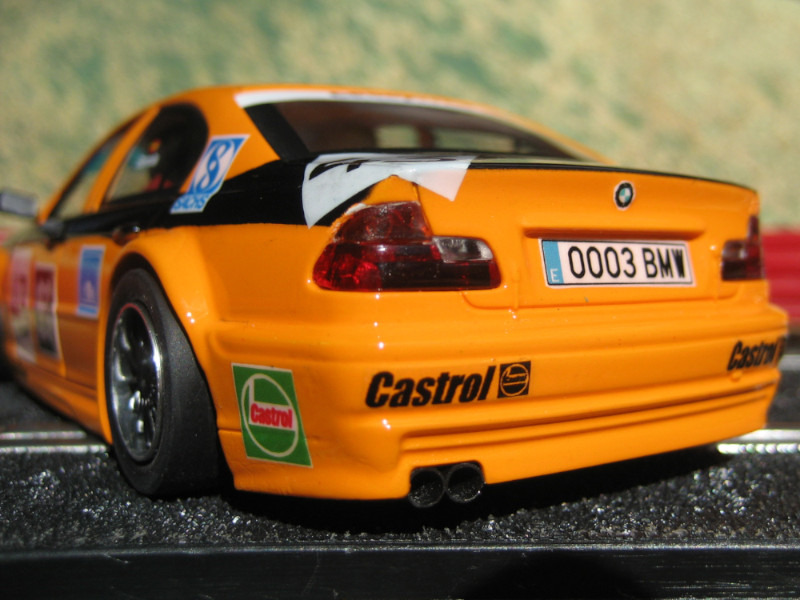 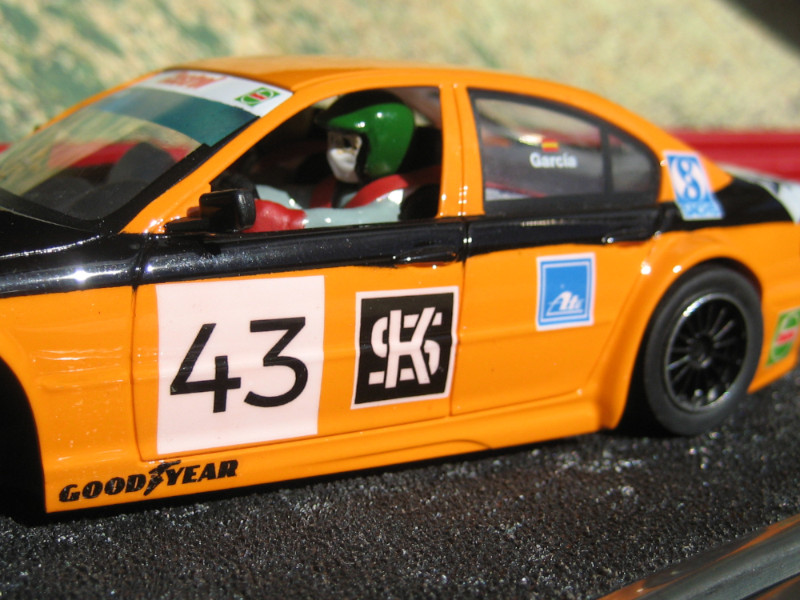 Mission accomplished, the car has served as a test bench with a more than acceptable result although I have taken note of some details, such as being more careful with the masks in subsequent occasions to avoid defects, or gently sanding the paint over which will go another coat of paint, in order to get a better result of that second coat of paint. The paint for polycarbonate has been shown as a good primer for the lexan trays and it can be painted without problems, as we would with a normal plastic tray. I will check its duration over time. The decoration of the interior has also served as a test bench with an acceptable result, but I will have to continue working on it. Now I will enjoy the car in the slot track, which is what it is made for.