One of my favorite slot car manufacturers, Fly Car Model, had in its catalog a slot car series specifically focused on the competition, called the "Racing" series. Basically were some models of its standard catalog, with special chassis, fitted with calibrated crowns, axles and wheels, the interior was changed by a simple lexan sheet to save weight and very basic liveries, even in some cases the body unpainted to show the color of the plastic with which had been injected.
Within these ready to race slot car series had both track models, such as rally, even trucks. Some of them were sold assembled, ready to adjust, oil and ready, and others sold in boxes with the mechanics unassembled and including crowns of different sizes and two types of motor pods, one for long box mabuchi type motors and other for RX type motors, along with the rest of the mechanical components of the car. One of those boxes was that I bought some years ago, with reference 88317 and it included a Porsche 934 in a simple "Shell" livery and various mechanical components unassembled. This is the car that I refer: 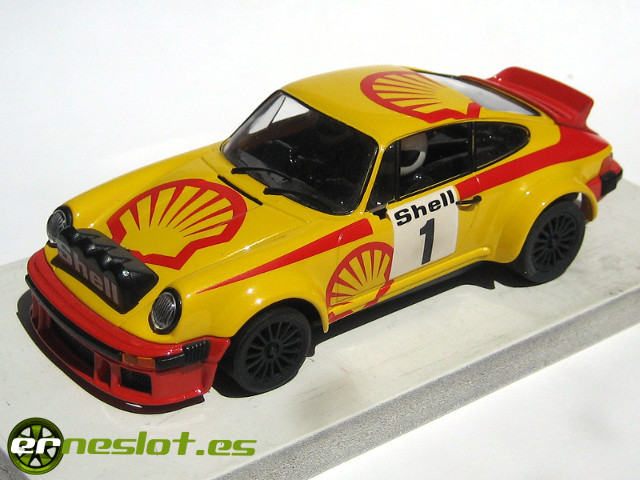 Leaving apart the car decoration, you may like more or less, it was a very competitive slot car at the time, of course now surpassed by other cars since it is a car about 10 years ago, which was hard to beat in Rallyslot races, mainly classics. Especially intersting was its chassis and motor pod with suspension, which worked really well, and allowed the car a very good performance in both rally (specially) and circuit tracks, despite its short wheelbase.
At the time I bought the car because I liked, but not to compete, although I have used a lot, especially in rallyslot circuits, and I love its performance. The decor is a different thing, I did not like much but I did not gave much importance to it. Over time thought to give a change and do something nicer. Coincidentally I had a Porsche RSR Prototyp decals wrong scaled and thought to use them in this car. Not going to fit perfect on the body but at least allowed me to make a interpretation of a decoration that I quite like, which is the decoration of the Porsche Carrera RSR entered in the 1973 Targa Florio. I wanted to achieve something like this: 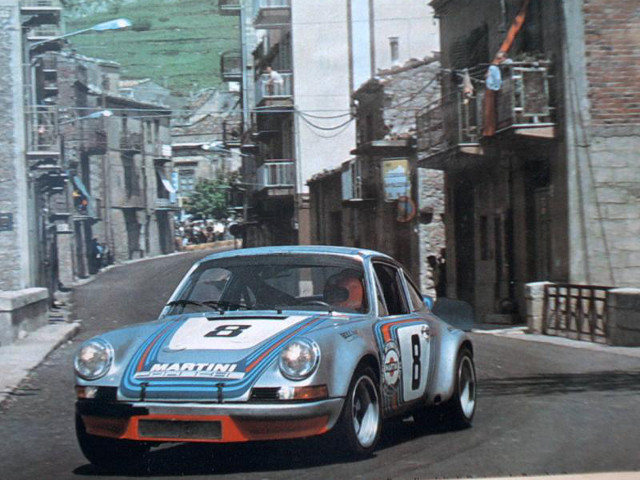 Being a decoration "inspired by" allowed me multiple licenses. The first is that instead of metallic gray, painted the body white, so that the colors of the decals look stronger. Moreover, as I had to make a few extra decals to complete the decoration, I made a couple of rally plates like the cars ot the Monte Carlo rally in the 80s.

The slot car painting process was simple. I disassembled the body completely and instead of sanding the original paint to leave the plastic clean, lightly sand the surface and applied a couple of soft Tamiya white primer coats. With the primer well dry, I painted the body with bright white Tamiya acrylic paint. In total I had to apply three coats to get the white color homogeneous throughout the surface, sanding lightly with waterproof sandpaper between coats.

As details, only I painted the window gums with Vallejo metallic gray acrylic paint, masking previously with Tamiya masking tape cutted into thin strips for better fitting to the body. This work is a little bit hard but the results are worth it.

The front and rear bumpers of the original slot car were red and so kept them. Only I put a decal on the rear bumper to decorate it a little. 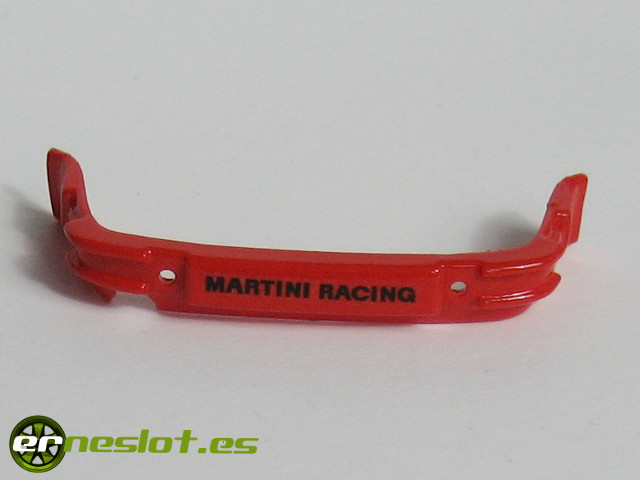 After letting dry the last coat of paint completely I put the decals. The placement was very simple, among other reasons because I have enough experience with this decoration. Although some decals were quite large, wetting the surface thoroughly with water and then applying MicroSol and MicroSet where necessary, in a couple of hours the decoration was finished. 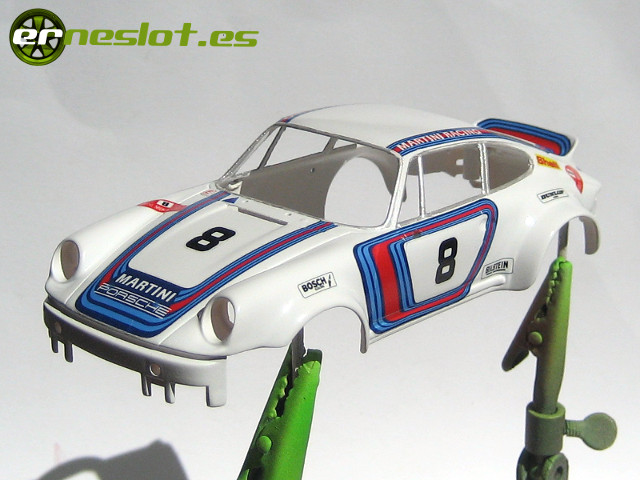 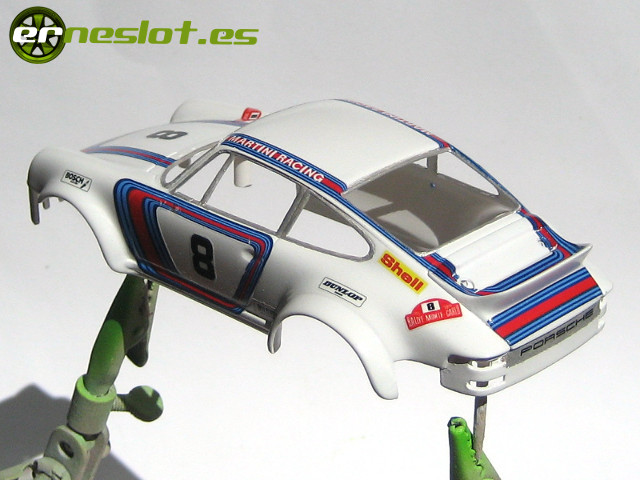 After leaving dry the decals, I applied a generous coat of automotive varnish to the whole body and the rear bumper were placed the decal and let it dry for three days until the varnish was hard enough.
I continue to be impressed how cars are with this varnish, brightness and hardness is impressive. Its application is more complex than with a spray varnish but the results have nothing to do with. 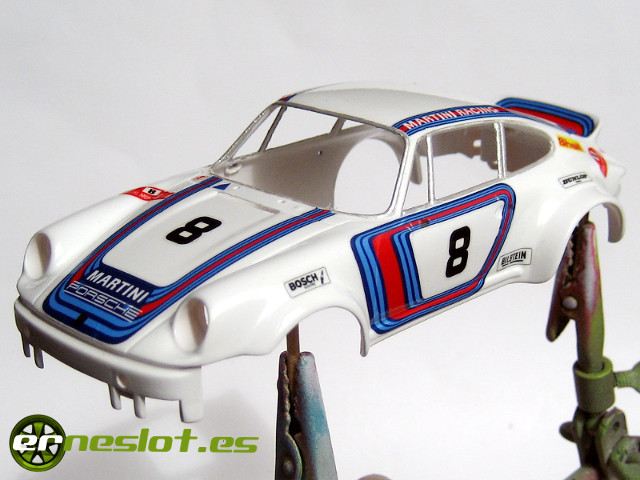 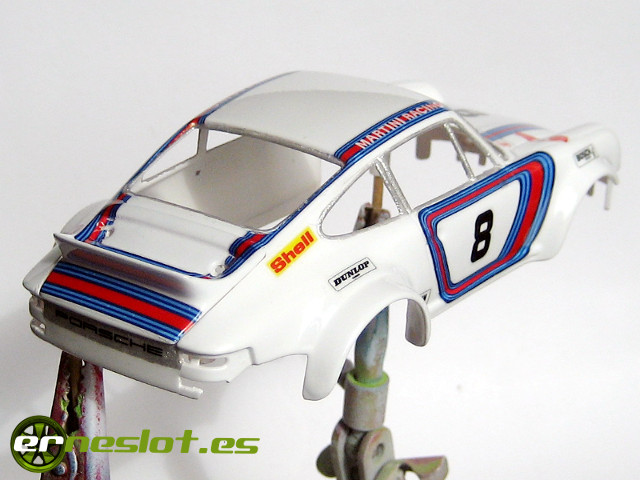 With the varnish dry, I pasted the rest of the body parts, door handles, front and rear lights, grilles, mirrors, glass, and finally the interior. Regarding the interior, to be a thermoformed sheet lexan only painted the drivers helmets with Humbrol enamel to give a bit of color, the rest remained as it was.

And this is how looked the slot car completely built: 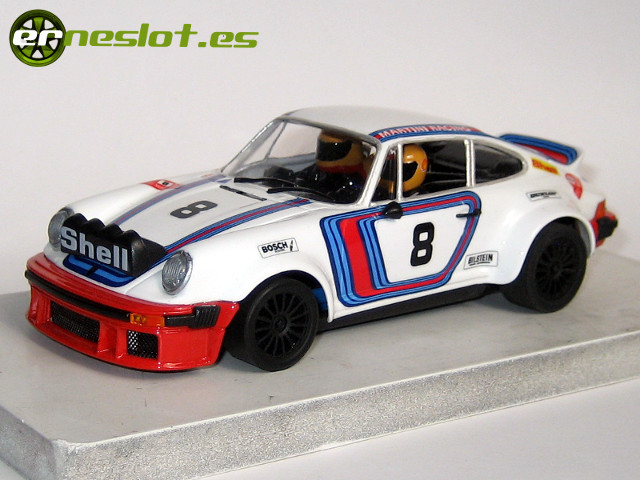 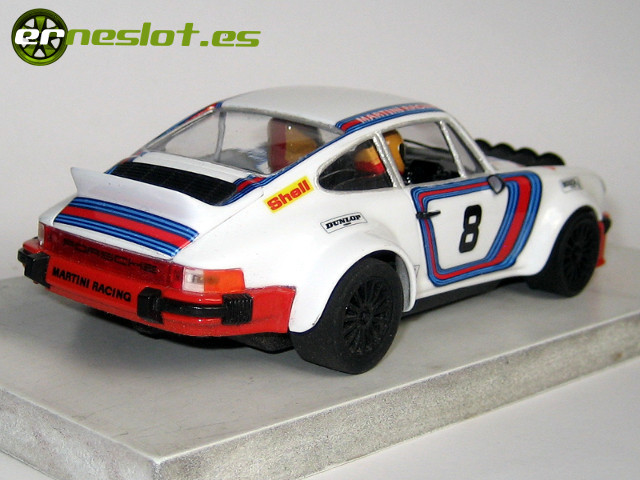 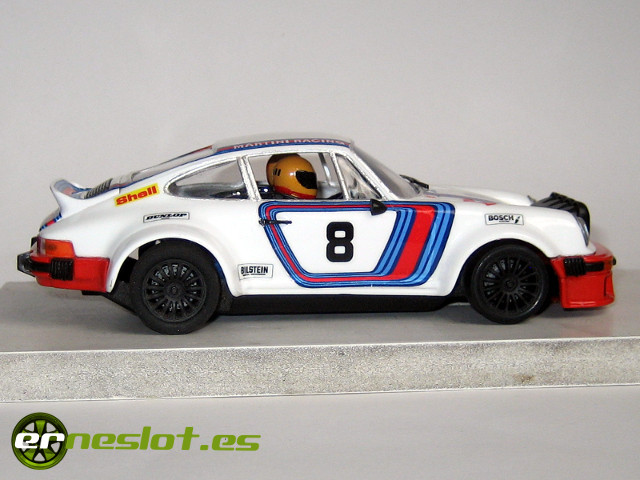 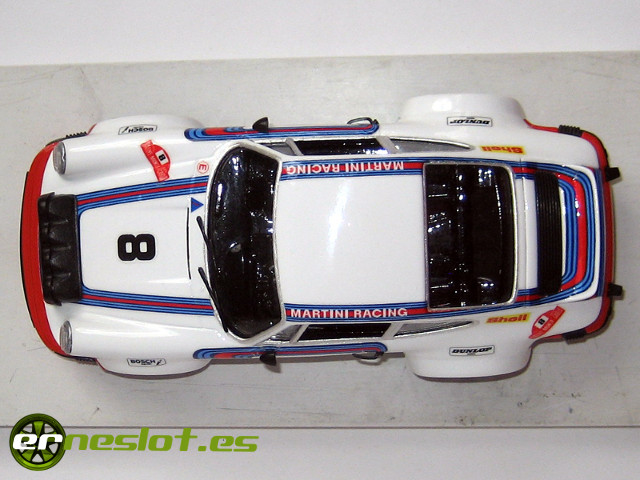 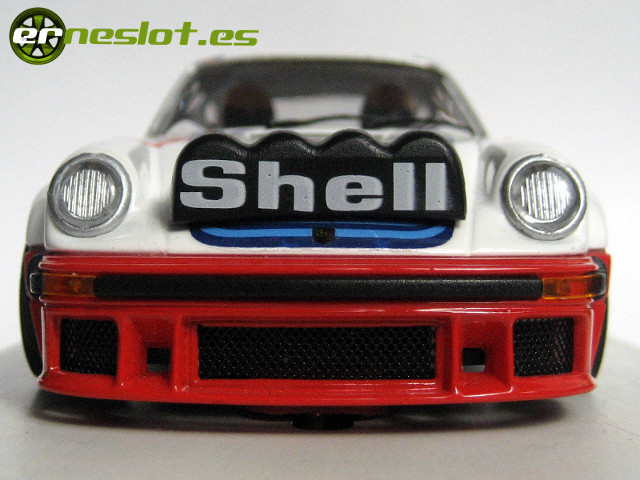 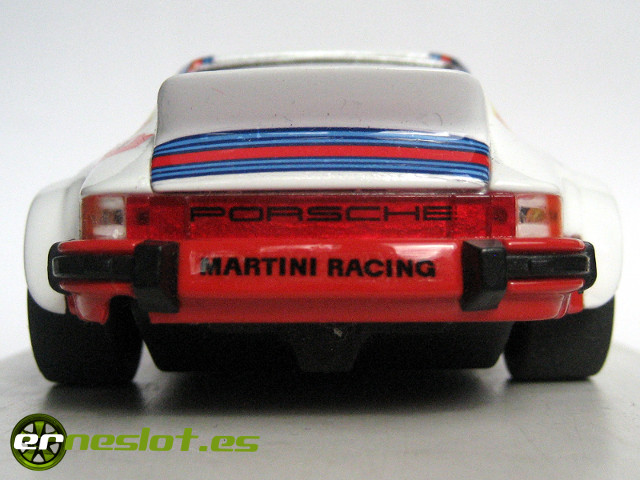 I wanted to make a change to a car that I love but with a decor that I did not like, take advantage of discards of other works, as were the wrong scaled waterslide decals, continue testing with automotive varnish. In all cases the results have been satisfactory. Mission accomplished.