The 26th edition of the 24 Hours of Le Mans endurance held on 21 and 22 June 1958 and were characterized by the continuous rain, torrential at times, which fell during the race. The winners of the race were Olivier Gendebien, Phil Hill and Mike Hawthorn driving a Ferrari 250 TR58 (car #14), framed in the category of sports cars up to 3000 cc. In second place were Graham Whitehea and Peter Whitehead with an Aston Martin DB3S (car #5) in the same category as the winner. In third place was the team of Jean Behra and Hans Herrmann at the wheel of a Porsche 718 RSK (car #29) who competed in the sport category of vehicles up to 2000 cc. The next two positions were occupied by two Porsche models in the category of sport vehicles of 1500 cc, the Porsche 718 RSK drived by Edgar Barth and Paul Frere and the Porsche 550A RS with Carel Godin de Beaufort, Art Bunker and Herbert Linge at the wheel, which was 5 th overall and second in his category after 288 laps. Here is a photograph of this last model, that is the one I´m going to build: 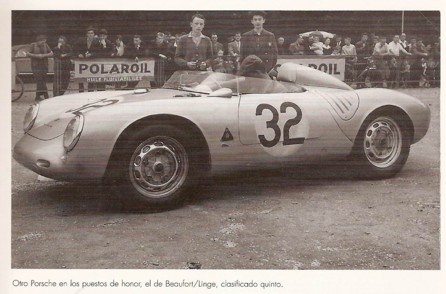 And here´s another photo of the car in a street version: 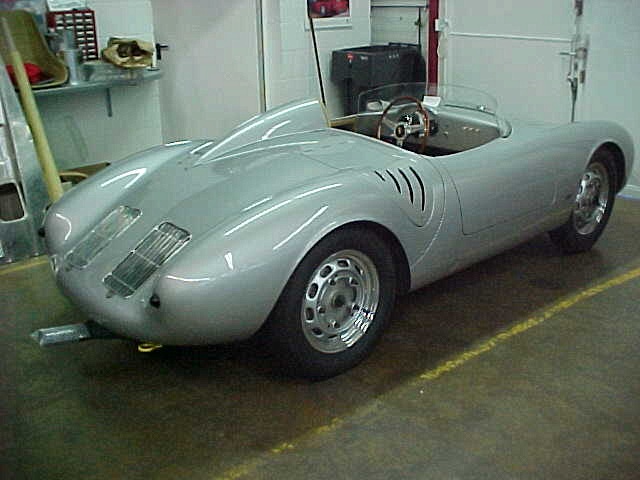 To make the scale model I start from a resin bodyshell purchased in the 2007 edition of the Foroslot Madrid. On the quality of the resin nothing to comment because as you can see, is impressive. This is an image of the kit without including the wheels: 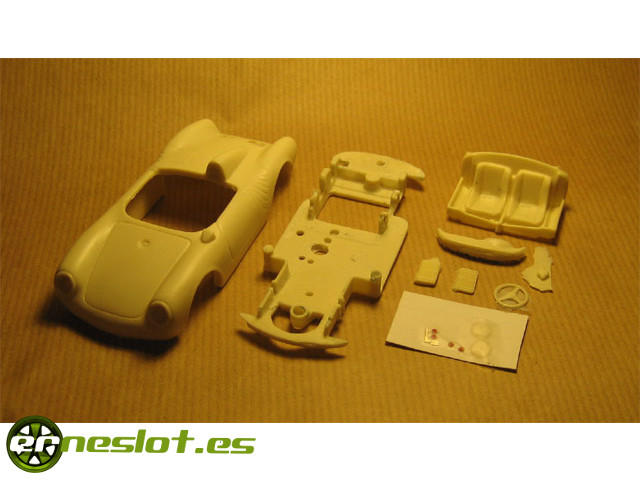 If anyone wants to get one this is the link to his webpage: www.unotreintaidos.es

The body was almost perfect, although the chassis had more holes than Swiss cheese ... but it was not something very serious, with a little bit of bicomponent glue and putty I´ll leave it as new. It was also a gift and a gift horse...
As the other model cars I built I will adjust the chassis and mechanics first. The joint of the body to the chassis I have done with two lugs of evergreen stuck to the body using bicomponent glue: 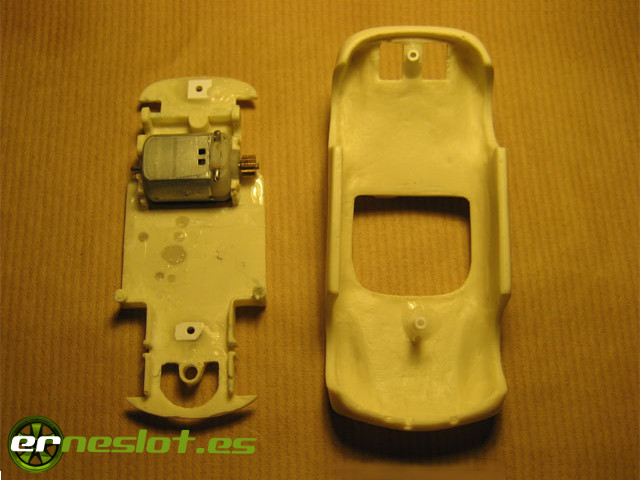 When I went to place the axles I ran into a problem that I knew I would find, is that the rear wheels sticking out of the body about 3 mm on each side because the car is so narrow..... I had to put them inside the body as possible but the engine pod prevented it... so I had to move the axle bearing inside to make some space and enter the wheel. To do this, I made two supports for the bearings with evergreen and used a nylon bearings attached to the brackets. To left them in the correct position used some brass bearing to guide the axle in position: 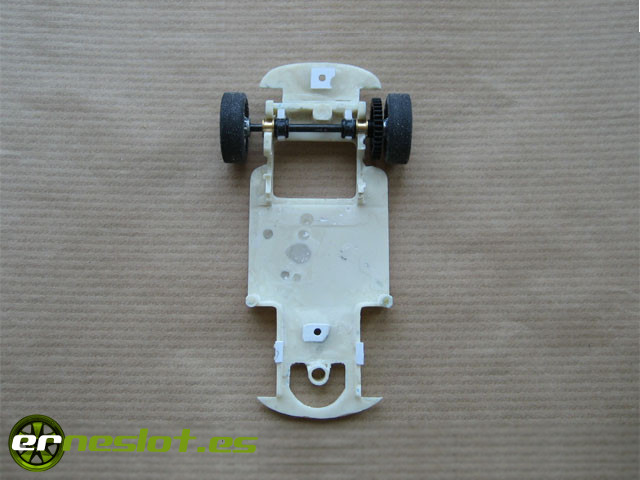 Once well glued with bicomponent glue, With the minidrill I eliminated the original supports of the bearings and then the wheels were well embedded in the bodywork: 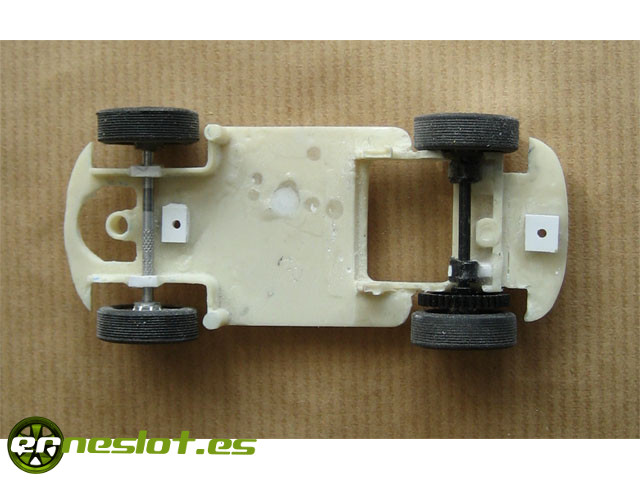 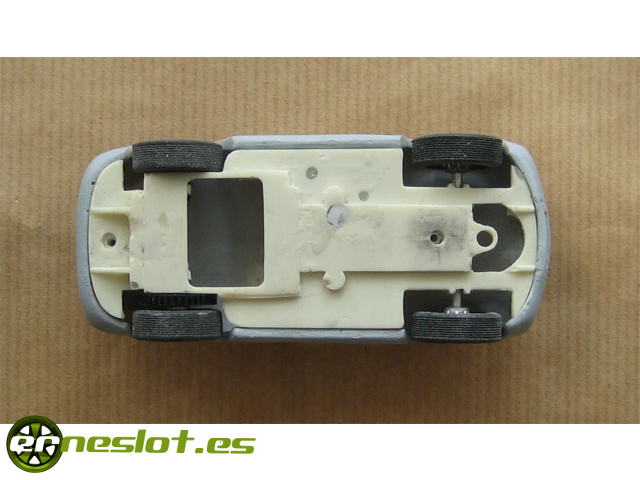 Meanwhile, I applyed the first coat of primer to the body to see failures more cleary. They left very few, just a few large pores in the front air intake, which I covered with cyanoacrylate and resin wood chips, and smaller pores on the underside of the body covered with putty dissolved in acetone: 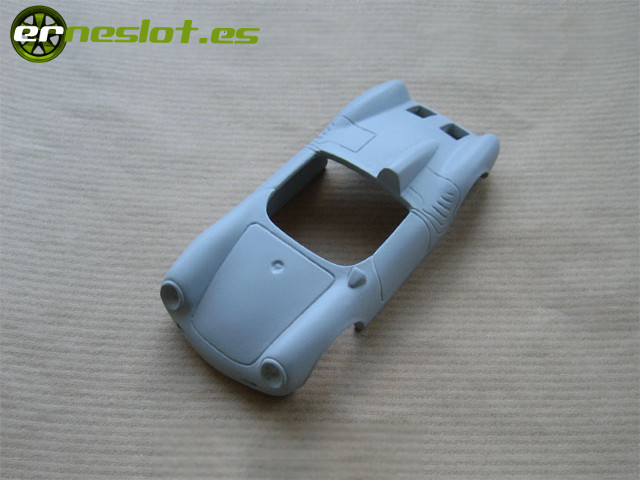 Before starting to paint the car, I took a little more to detail the chassis and the body, which is rather complicated due to the high quality of the kit. To improve chassis made the car´s exhaust pipe with a evergreen pipe and, with evergreen too, the piece what would be the headrest of the car: 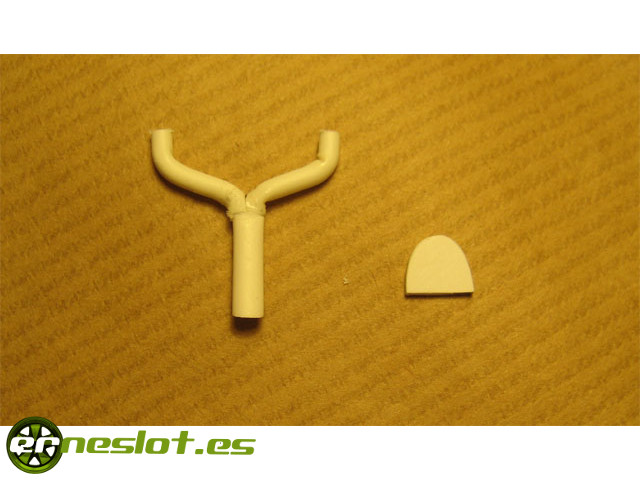 and thus looks the exhaust superimposed on the chassis before pasting: 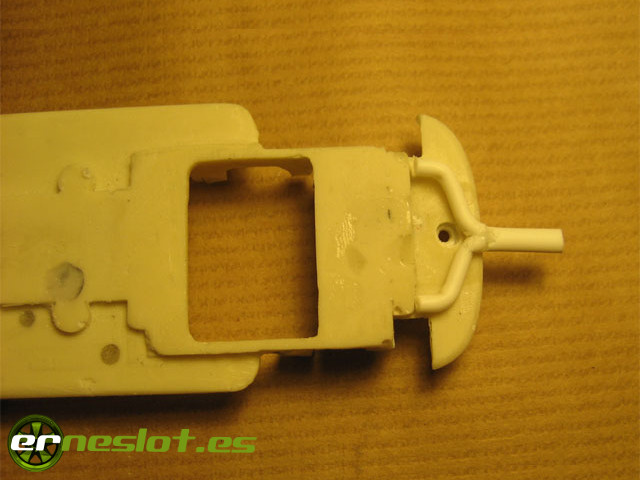 The only improvement I could think to do to the body was to open the hole for the gas cap, to leave more in line with the original car. First we open the hole with a 4 mm. drill. 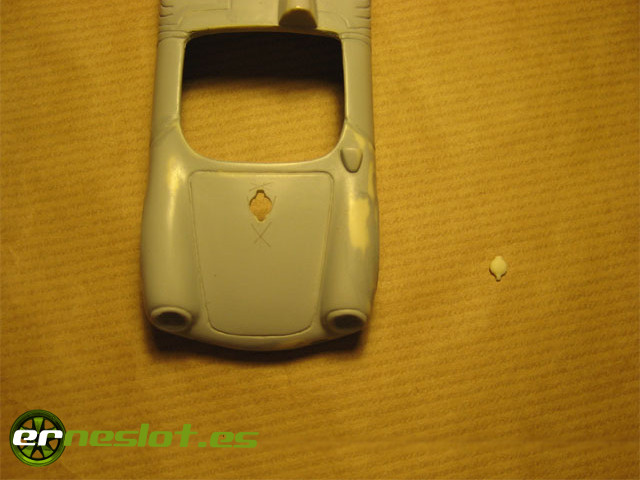 And in the bottom we paste paste a charge of evergreen plastic for the cap is to the proper height: 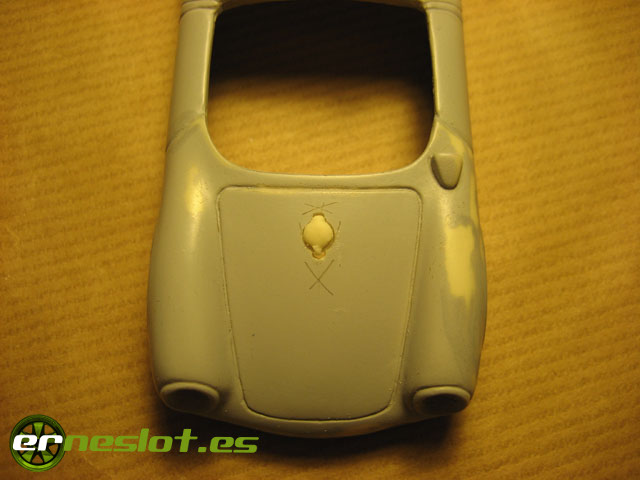 The next step before painting would be to build the interior. The seats are already prepared in resin, but the dashboard is a separate piece, I want to do something like this: 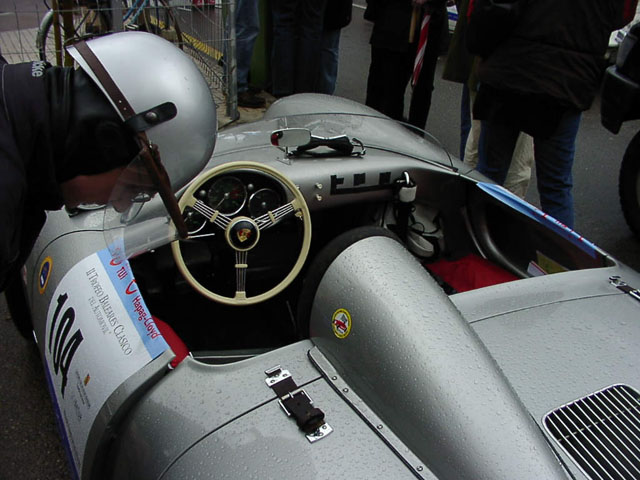 With strips of evergreen will do the parts inside the doors and the part that holds the dashboard. They are glued with bicomponent glue to the piece that are the seats, so I can handle without problems. 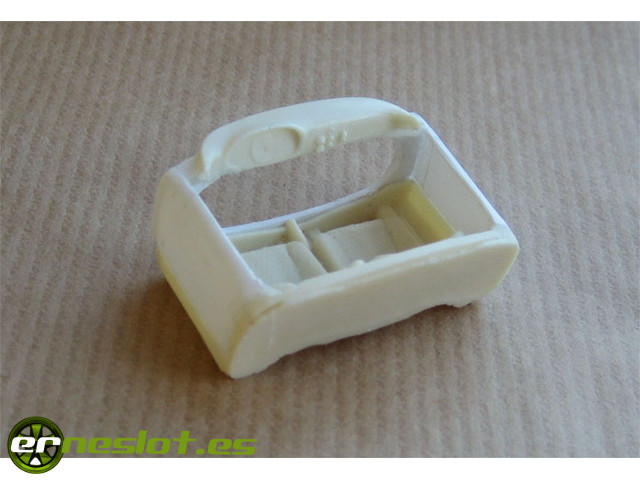 We mark with pencil where the doors are: 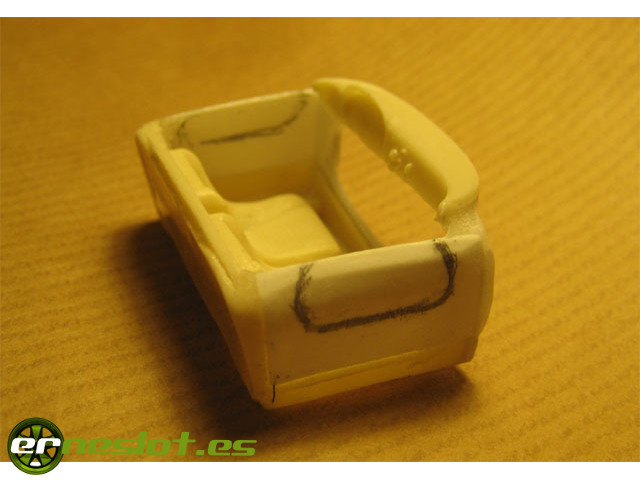 and we open the holes using a minidrill. Placed on its site, the interior look like this: 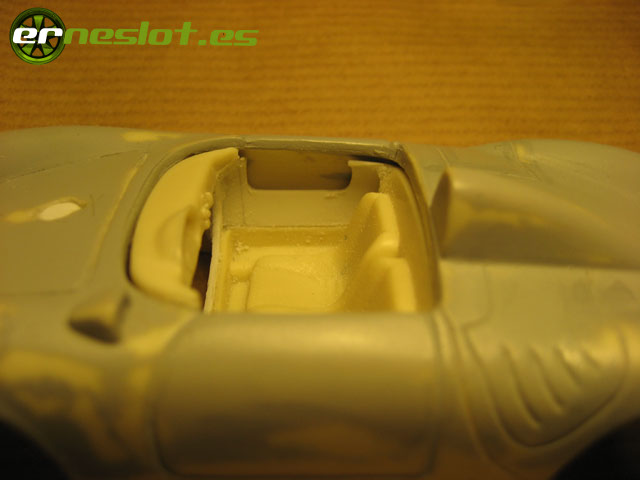 The next step was to give a coat of Tamiya XF16 acrylic paint (aluminum matt color) to the body to highlight any failure to fix them. And indeed some left. 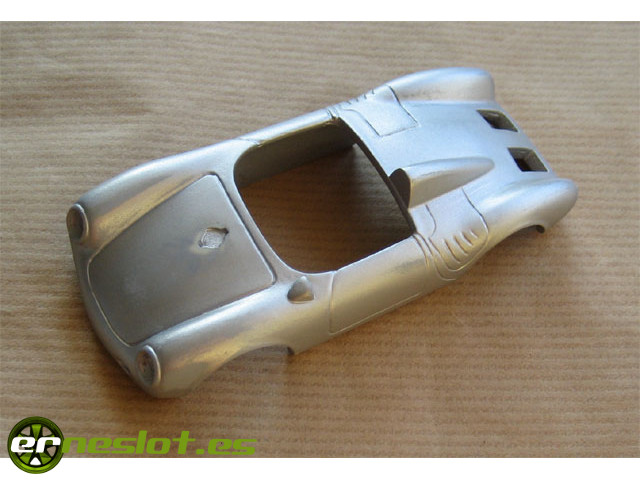 The body was nearly complete but lacked detail, the windshield. First I did it on graph paper and then cut out a piece of acetate from a magazine blister. 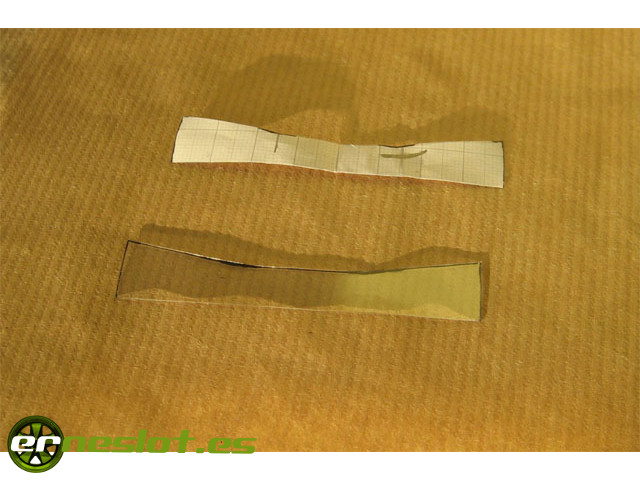 To paste it I used a technique similar to that used with the windshield of the 911 Speedster, go slowly hitting bicomponent glue, Nural 3 in this case, because it is a high transparency glue. The result is: 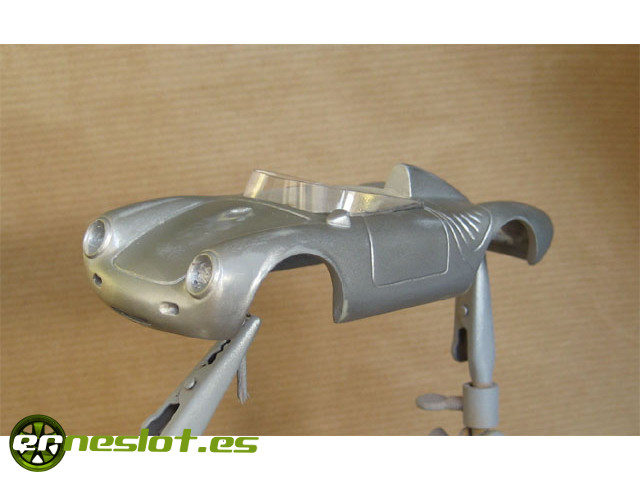 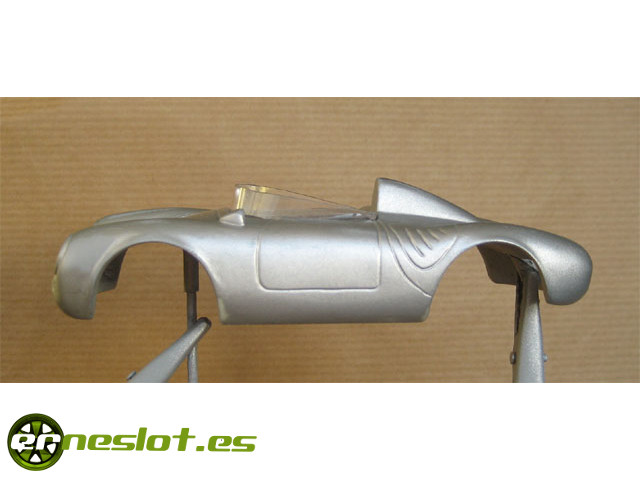 I would liked the windshield would stayed more lying. Try to correct it with heat but there's more to it than meets the eye.... In fact it was quite difficult to place it...
Moreover, I was painting the interior, brushed aluminum color, and the seats with Tamiya Desert Yellow (XF-59). The chrome of the gas cap and engine grilles I did painting first the pieces with white enamel and once dry painting them with an indelible metallic marker (Edding 780). The result is phenomenal, a very authentic chromed but can´t be well appreciated in the pictures : 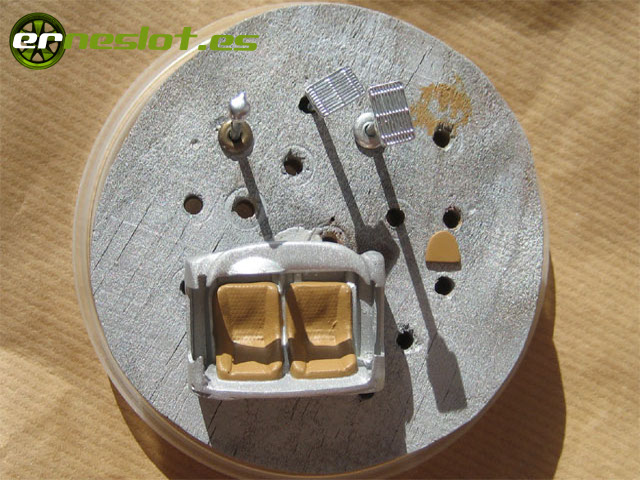 The decor does not pose many difficulties because at that time was limited to the number, manufacturer´s brand and little else. Neither can do much more because I´ve only got one photo of the car. 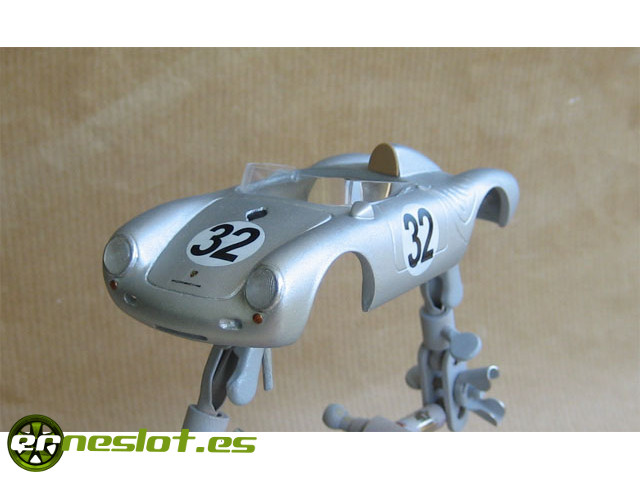 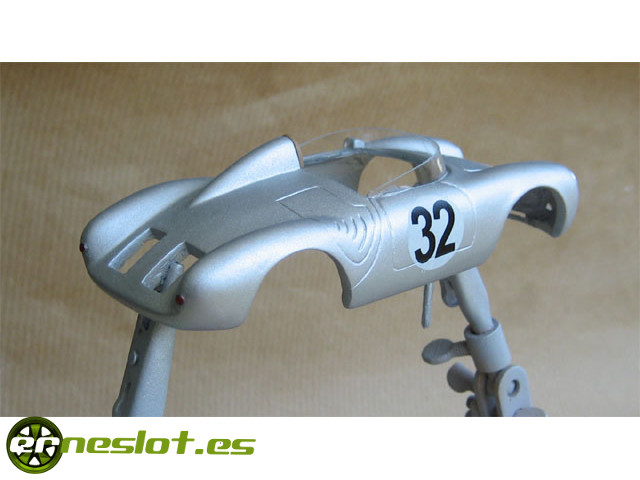 The waterslide decals are home made and varnished with "Bosque verde" varnish applied with an airbrush as I explained to the 911 RS and then cut with a cutting compass (... blessed invention ...). I have also taken the logos that came with the kit. The optics are attached with high transparency bicomponent adhesive, and I make sure that they will remain stuck and not be noticed the remains of the glue.
While the first varnish coat dries took the opportunity to assemble the mechanical part: 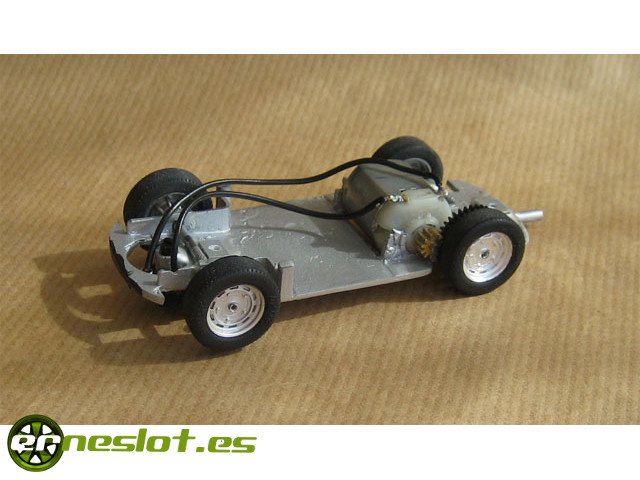 And finally, sticks the interior to the body using bicomponent glue, place the steering wheel and we have the car finished. 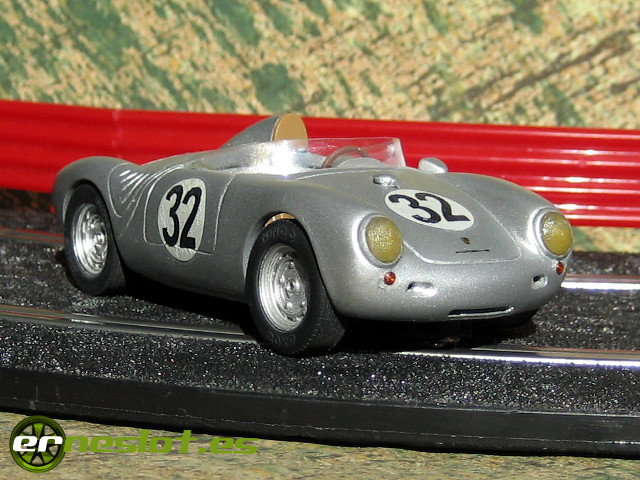 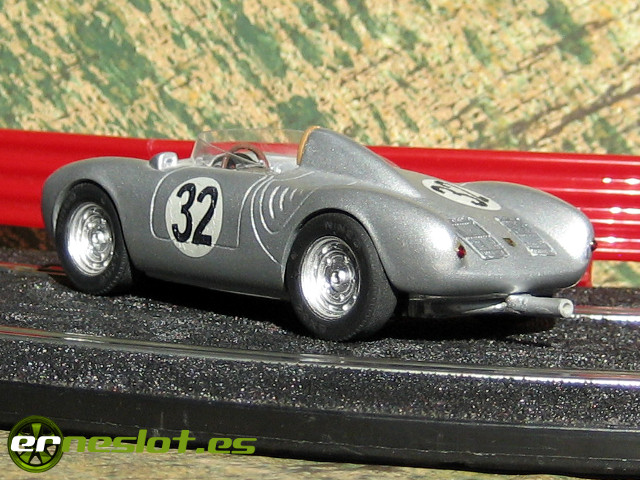 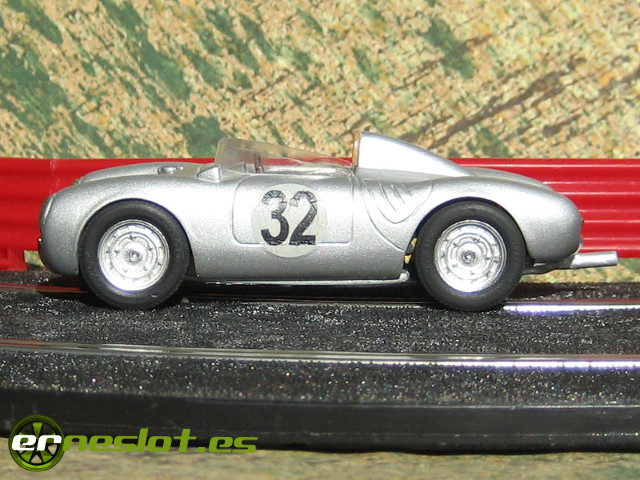 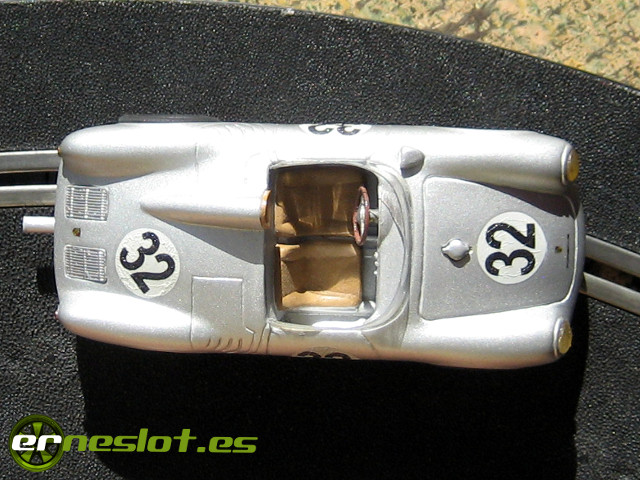 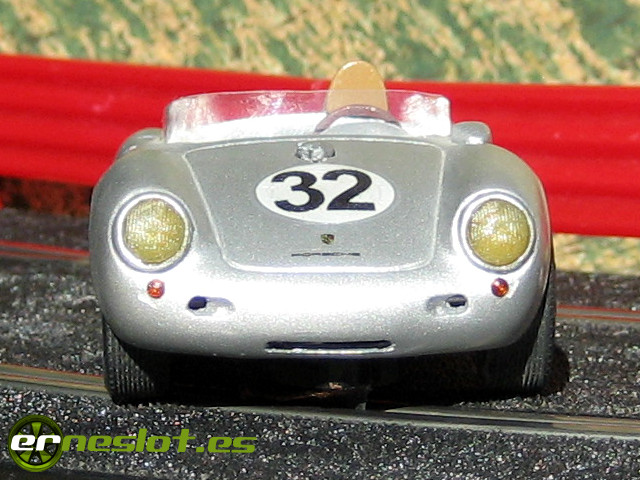 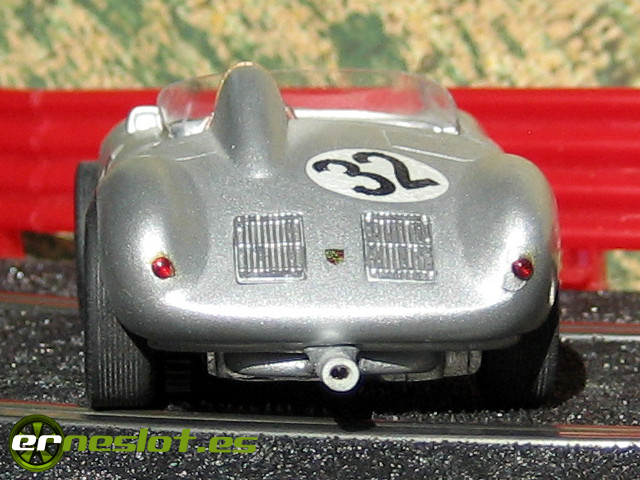 Is a pleasure to build a very well done kit like this of a such nice car. Is funny to build and from my point of view it has the perfect balance between difficult and level of detail. I enjoyed it very much.