The car I´m goint to present here is the Ford Escort MKI who Peter Hennige drove in the 1974 DRM championship. The car, in the European competitions of the time, was framed within the group 2, and in this case the car was tuned and prepared by the german specialist Zakspeed, also known for his preparations of the Ford Capri. The car fitted a Ford BDA aluminium engine with 1996 cc., which provided 272 hp at 8500 rpm. With this car Hennige was ranked 16 of the 1974 DRM championship with 19 points.
Here are a couple of photos, the model I´m going to reproduce is the black one: 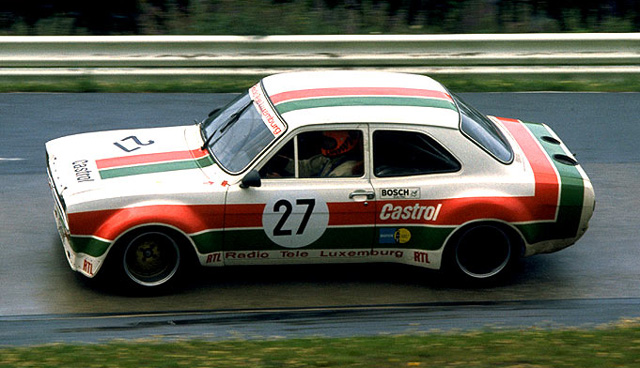 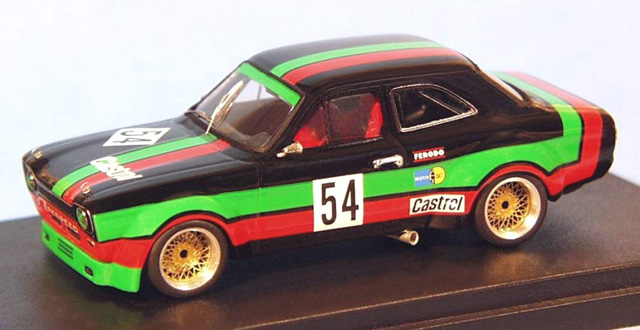 Like most cars I do, I really like it, even the normal version of this car is one of the classics that more I like. So I will make him a small tribute. I recognize that the reason to reproduce it also is that it is a fairly simple conversion since I´m goint to start from the first version of the Escort MKI Superslot manufactured, not the last they released in 2007, which is beautiful: 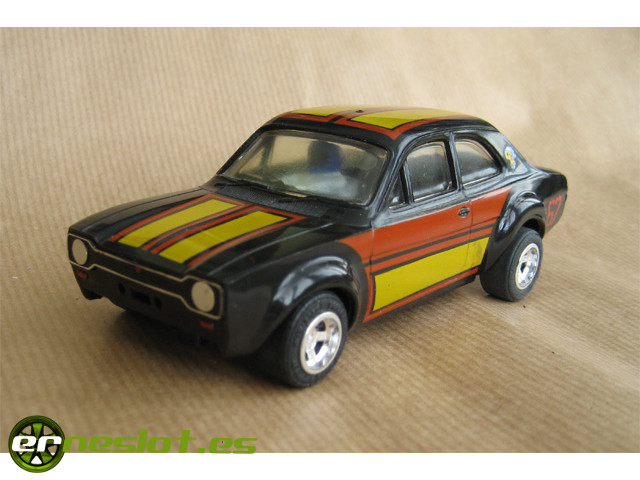 Reproduction itself is pretty good for what the manufacturer used to do at the time. The original model has few details, like the Superslot reproduction, excessively thick crystals, a plastic that can be worked poorly because it is quite soft and stretchy and especially the Scalextric Ford Fiesta and R5 chassis style, with the engine tilted back, are its main features... well as a very accurate forms of the body.
As I firts like to do is to adjust the chassis to the body. The original method of securing the chassis was fitted in a few notches into the body. As the car was very used, the front had disappeared and I only could hook back. And I do not like this kind of unions and chose to do a screwed one with some lugs attached to the body with bi-component glue: 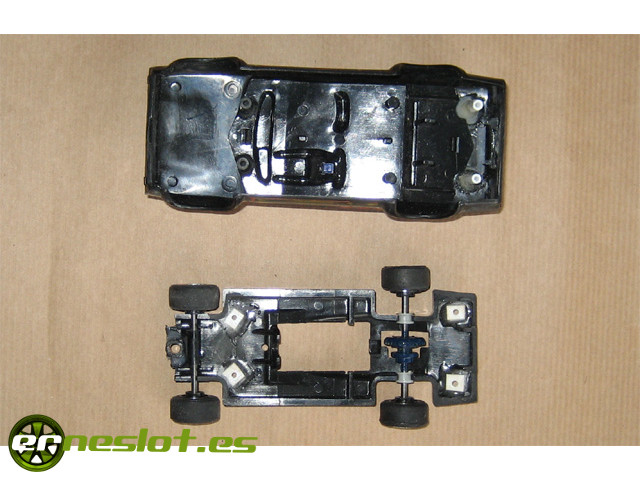 As said, the reproduction of the car is quite acceptable, but it allways can be improved a bit. In this case I am going to change the front grille and headlights, which are a piece apart from the rest of the body. What I did was open up the headlights on the grille, which were originally painted, and set a couple of optical from a headlight grill from a SCX Porsche SC: 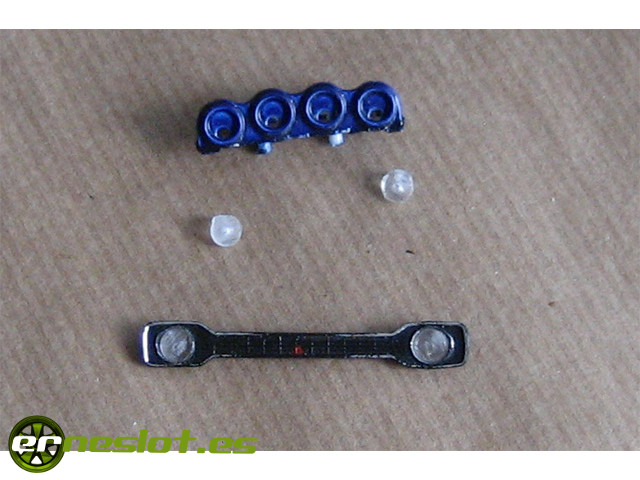 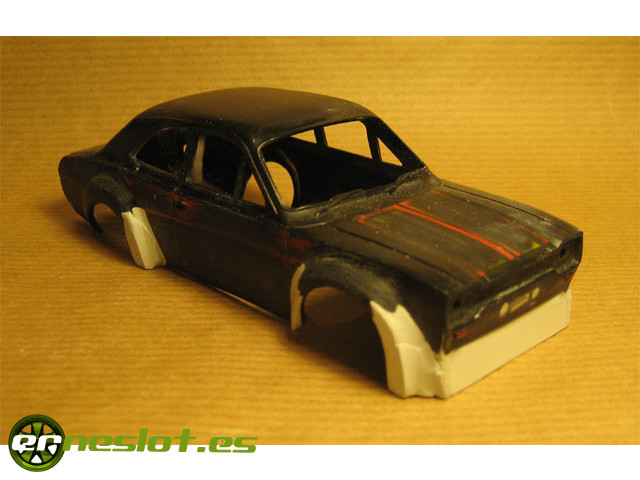 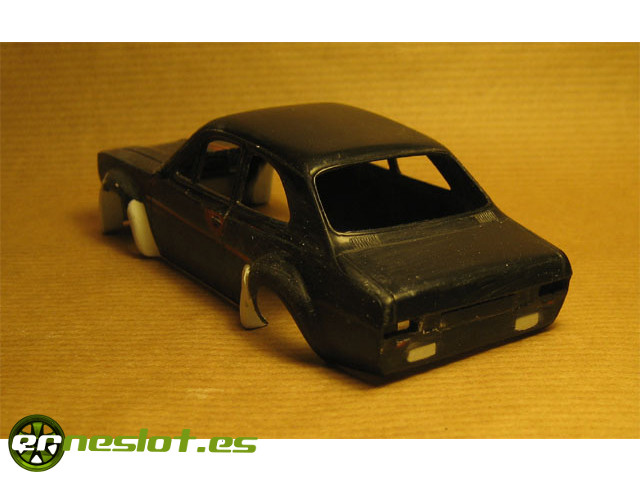 As seen in this last photo, I opened the holes for the rear lights, to give them a little more realism.
Looking the model more closely, I realized that not only had to change the shape of the wheel arches to come out from under the bodywork, but also had to stretch them a millimeter or so. The solution was easier, putty in the wheel arches, which previously had stuck some thin evergreen strips sticking out the millimeter necessary. 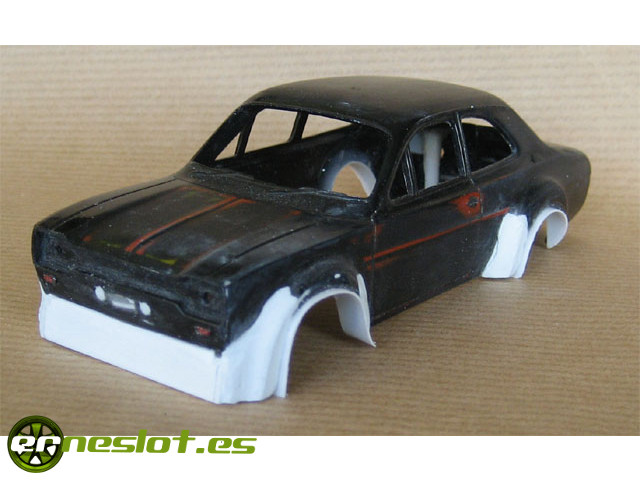 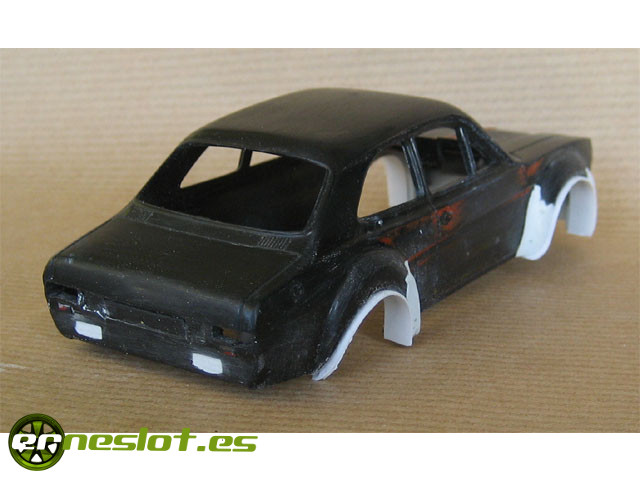 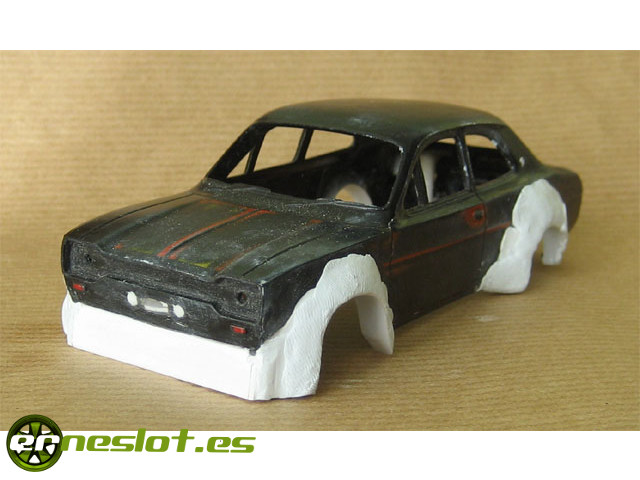 After some sanding and to see things more clearly, nothing like a coat of primer. 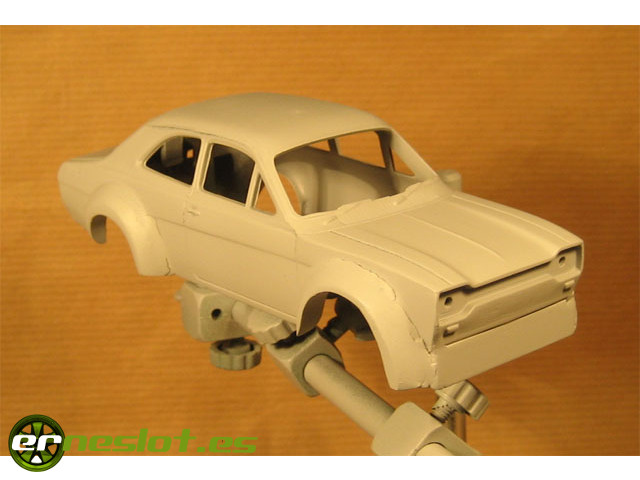 The wheels of the model have given me a few headaches. The car seems to be that originally fit a 15-inch BBS wheels, which in the 1/32 scale represents a diameter of 11,90 mm. The original model rims have 11.60 mm. diameter and they seemed a little small. Moreover, I intended to use a Ninco BBS wheels, but to scale provide a measure of 17 inches and gave the impression of being very large for the model. For more mess, searching photos of the car on the Internet, I found a page were is a replica of the car that had mounted a 16-inch wheels, this is the page www.northernbloke.com.

I decided then to fit it a 16-inch wheels, 12.7 mm. diameter at 1/32 scale. Then another problem arose, I couldn´t find wheels that dimensions, so I fabricated myself starting from the Superslot Austin Metro rim, the same as the original Escort. These are the tires: 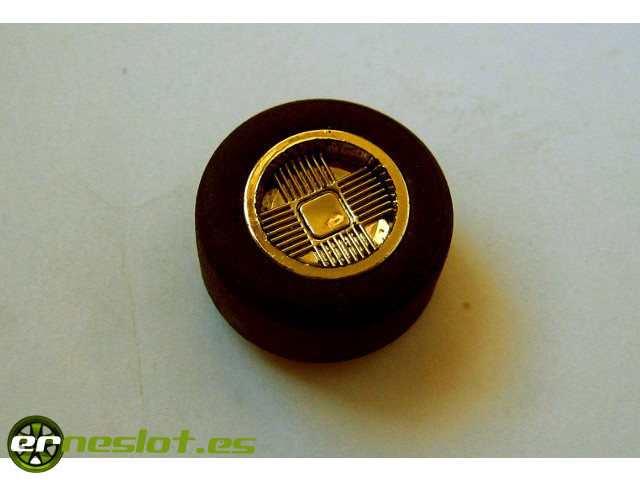 First I emptied the inner rim with the mini drill engraving accesory.... 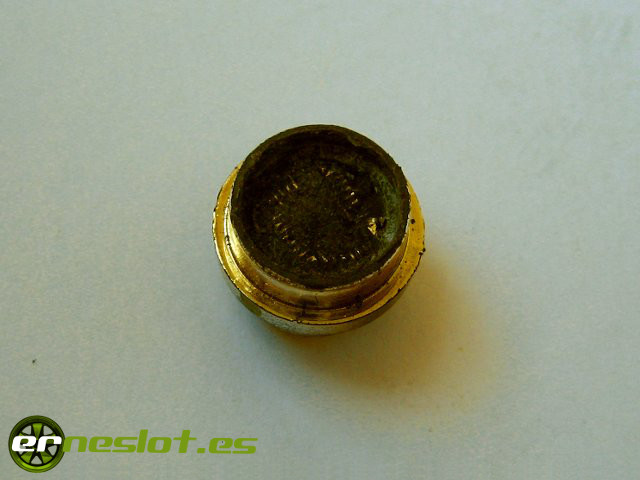 .... with the intention of fitting inside an insert from a Slot.it wheels: 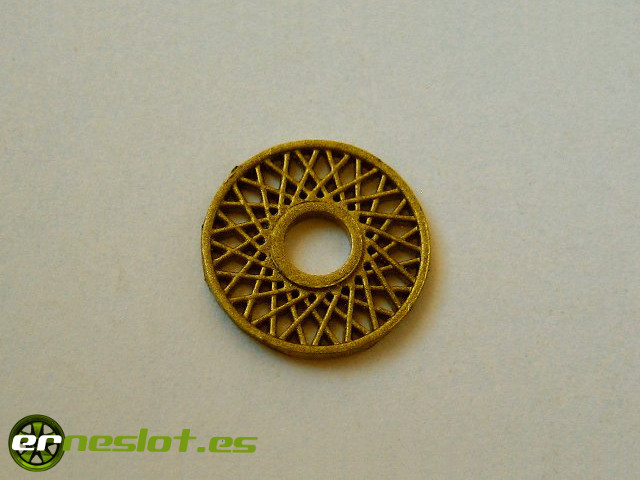 With patience, round file and sandpaper I got to fit the insert into the rim: 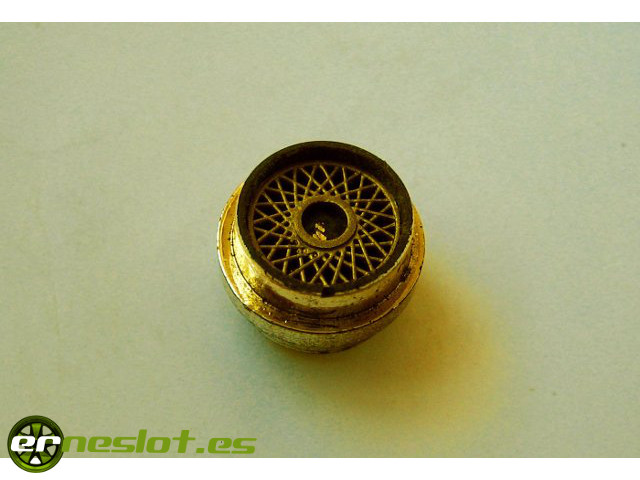 Moreover, as I had to widen the diameter one milimeter plus depth the throat of the rim, pasted around the rim a evergrern strip of 0.5 mm. thick in order to achieve the correct diameter: 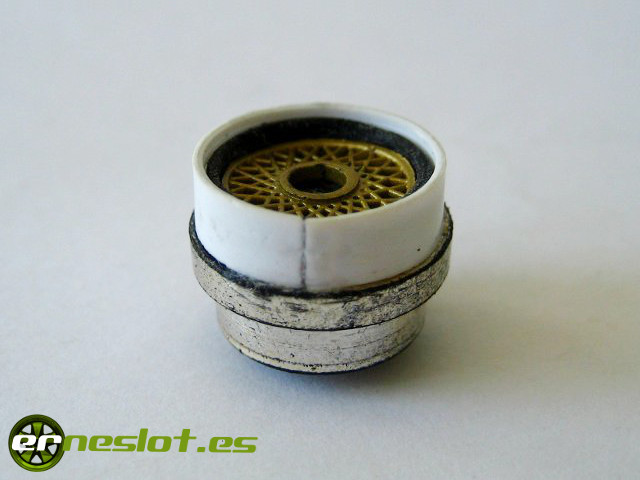 I did the throat of the rim with another strip of evergreen, this time to 1 mm. thick. 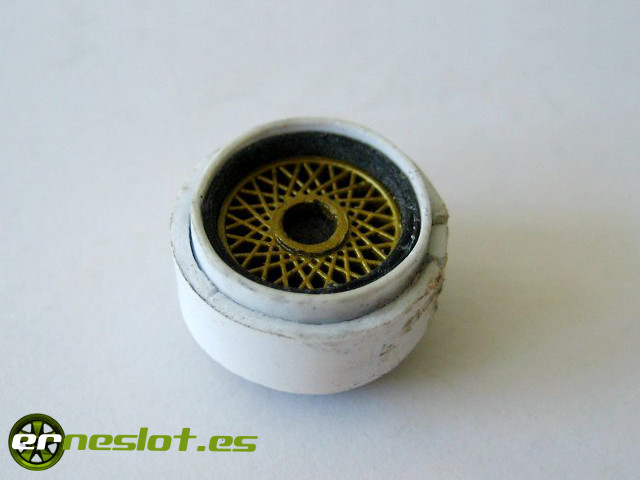 And once finished the job, here is mounted in the car with a tire. Missing some tinkering with the sandpaper and paint well but at least I have the tires I wanted: 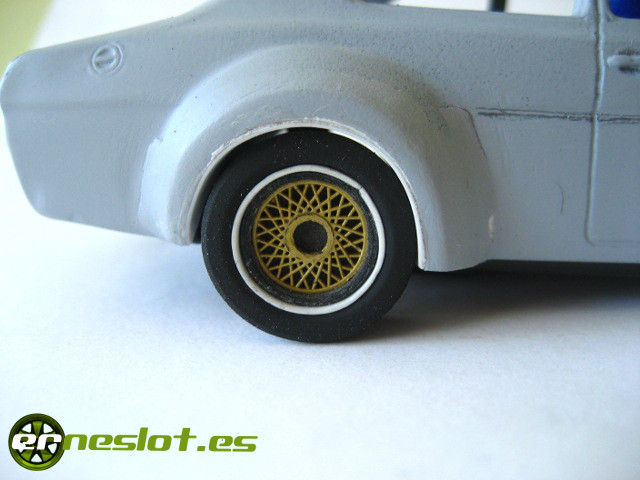