The next car I was an order for a gift. The client wanted to gift his friend an exclusive car and also had to do with the football team which is enthusiast, the Sporting de Gijon, a spanish football team. I was asked to make a free decoration on a Scalextric Porsche 911 GT3 with the Sporting de Gijón colors, similar to other cars decorated with football teams liveryes like FC Barcelona, Real Madrid or the slot models with the Spanish football sellection decorating scheme Fly Car Model has sold sporadically in limited edition. Not only Fly Car Moldel but Superslot, years ago, sold a number of cars decorated as Premier League football clubs on the basis of the Ferrari F40, some quite colorful.

At first it felts little strange to me decorate a car without any reference to decorative schemes or related to motorsport sponsors. The client had only asked me to include a specific logo, club crest, a schematic drawing of jaws that has the club as a trademark, a logo referring to the 100 years of the club, the red and white stripes of the players shirt and dorsal number 9 who wore the legendary player of the team Enrique Castro "Quini".
It occurred to me to make the decor as if it were a football kit. Over the fully white painted body at the bottom I painted a blue stripe like the footballer shorts, and on the hood placed a decal with red stripes and the number nine dorsal of Quini.

To remove the original painting was a simple task, with just over half an hour dipped in rubbing alcohol paint peel off easily, but the body was made of black plastic which complicated a little the decoration process of the car. To achieve a sufficiently solid white had to be given three coats of white enamel spray. 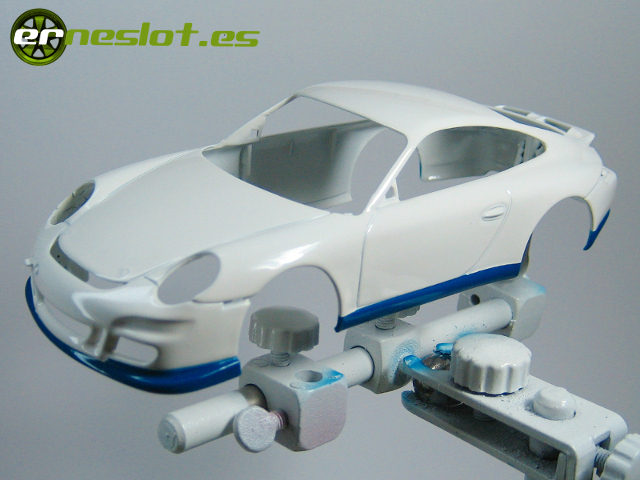 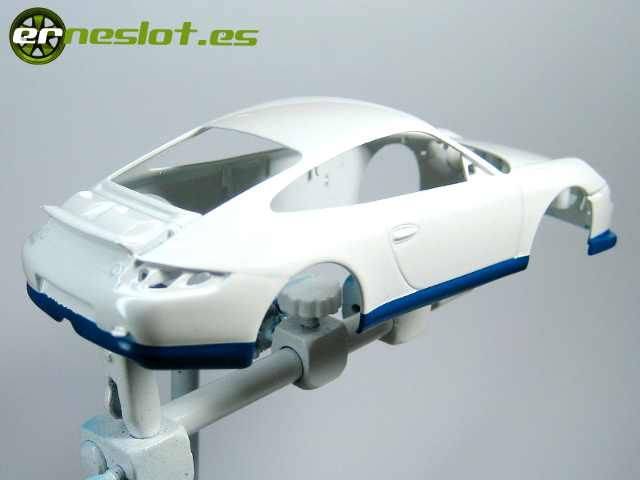 The bottom blue stripe was painted with Tamiya acrylic paint with the airbrush.

The wheels and rear spoiler were also painted the same blue tone as the bottom strip. The specific tone of blue I got after mixing various shades of blue to achieve a shorts-like Sporting de Gijón color. 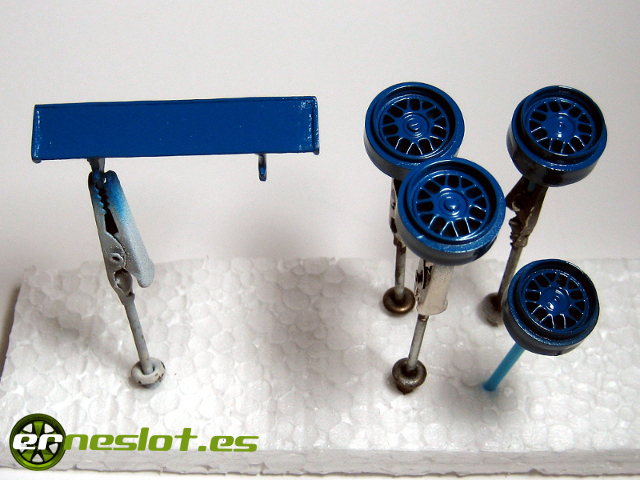 I placed all the other logos and some more related with Asturias (a region in the north of Spain) on the body trying to integrate them into the car body without amassing much logos. Except for the white paintwork, Duplicolor spray enamel, and the lower blue stripe, Tamiya acrylic paint, the rest of the decoration was made with waterslide decals.

After letting the paint dry thoroughly applied a coat of automotive varnish to protect the body. With the varnish coat completely dry, place the decals with the rest of the decor and let them dry completely after apply the final coat of varnish. 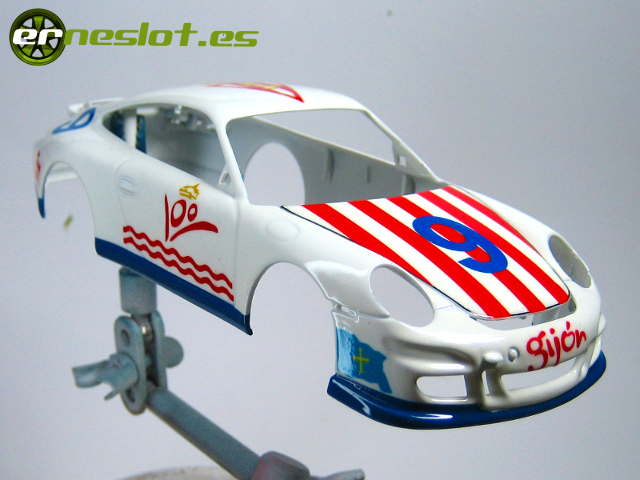 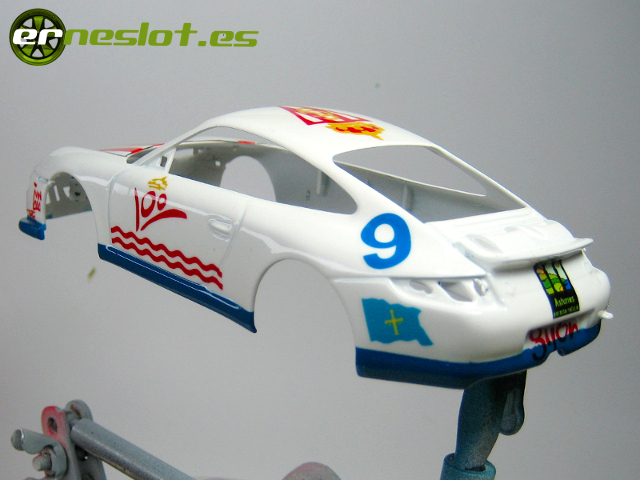 In the interior I did not do any work, but to improve the chassis a little painting the tailpipes painted with metallic enamel. 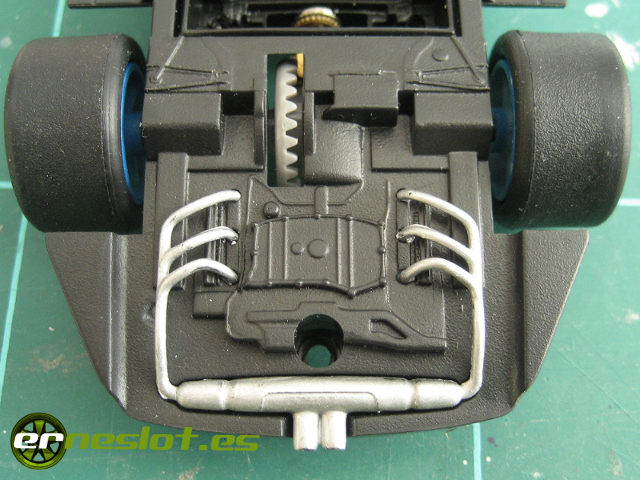 And so was the car fully assembled. 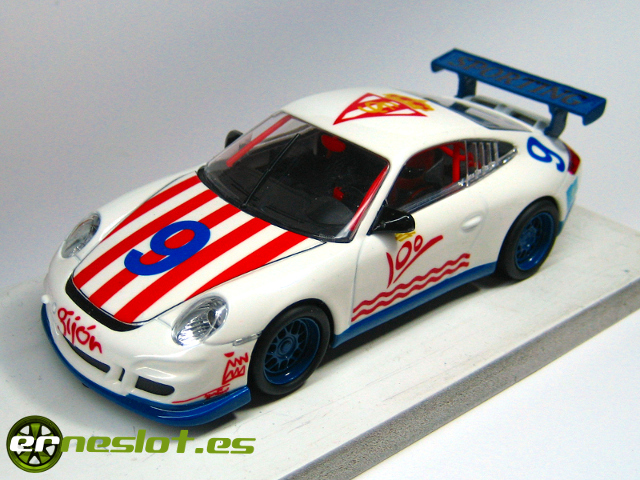 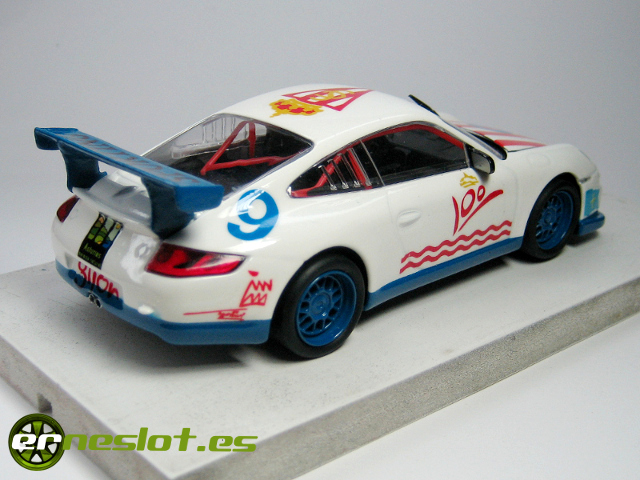 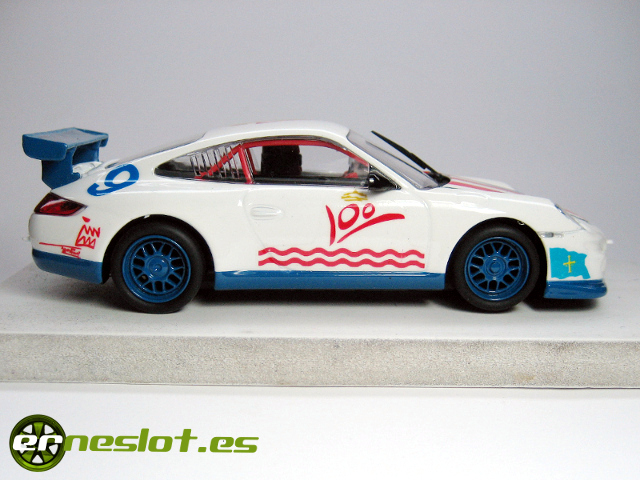 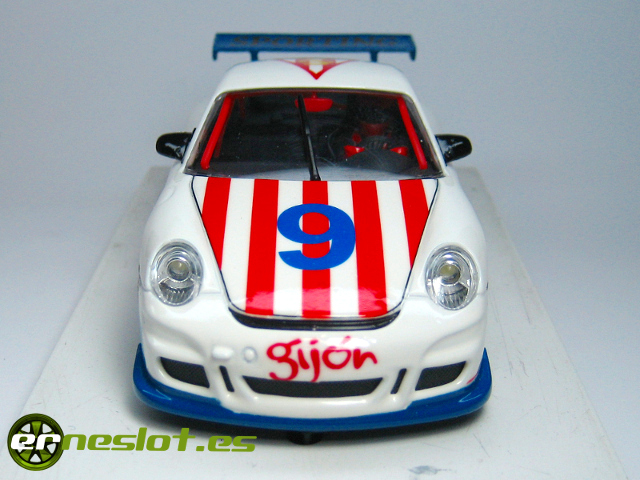 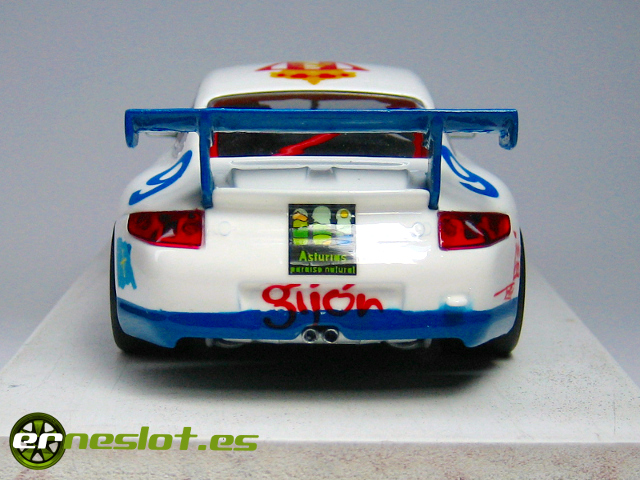 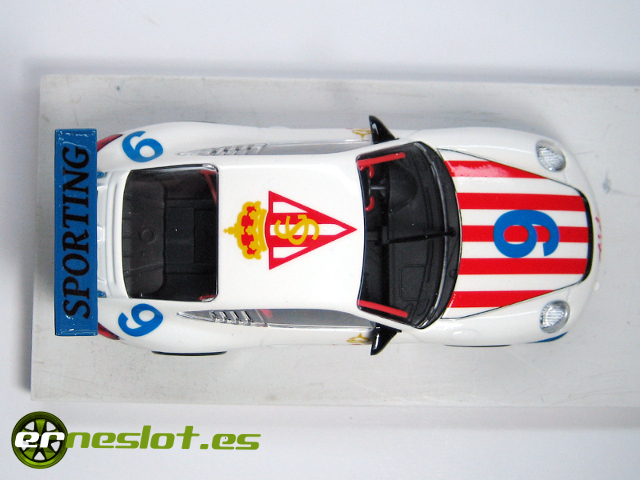 The white, red and blue colors combine very well and the result has charmed its owner, that is the end of the day what it was. For me, it´s been a chalenge to do a livery for a slot car without relation to motorsport.