Some time ago, my friend Raul gave me a set of home made waterslide decals with the decoration of the Porsche 911 Carrera RSR with which Paul Keller, Erwin Kremer and Clemens Schickentanz entered in the 1973 24 hours of Le Mans (chassis number # 911 360 0610), where they achieved the 8th final position and the victory in their class (GT3.0). This photo is of the car racing at Le Mans in 1973: 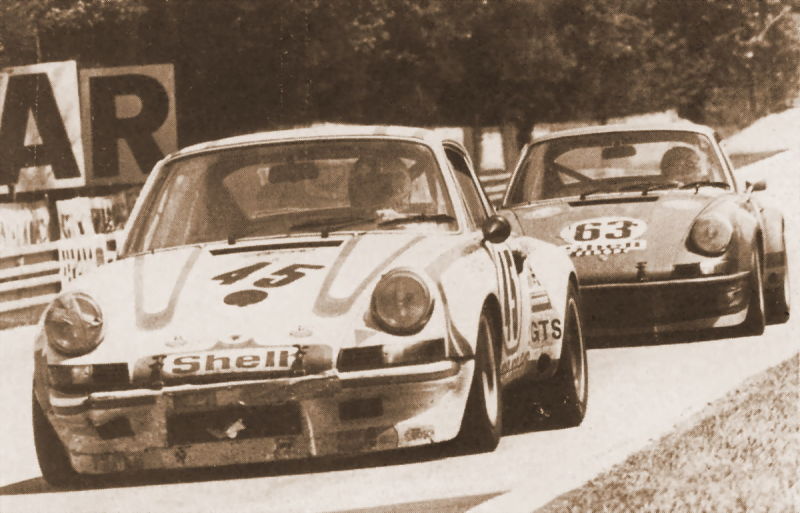 And this one is from Nürburgring race the same year. 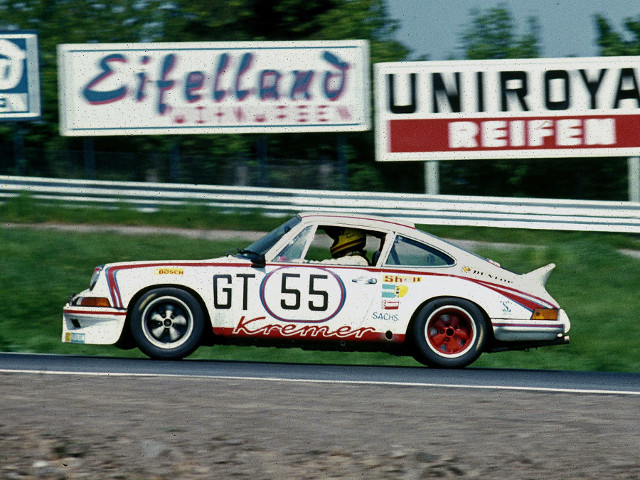 As I had many other works to finish the decal sheet was kept in the drawer during a long time waiting for better times. The time passed and I bought one of the Flyslot Porsche 911 Carrera in its "racing" version, who was race tunned with Avant Slot spare parts. From my point of view, a very good marriage, because a very beautiful reproduction of the car, as FlySlot has us used to, is joined with a very competitive chassis with material of very good quality, so that we get a slot car with a woderfull performance on the track, it isn´t an NSR Mosler but a very fast and fun car. In itself, the "racing" versions made by FlyCarModel of this car were already very competitive cars, but with the new Avant Slot chassis with its multiple regulations and possibility of mounting suspensions, is a step forward. This is the slot car I started from: 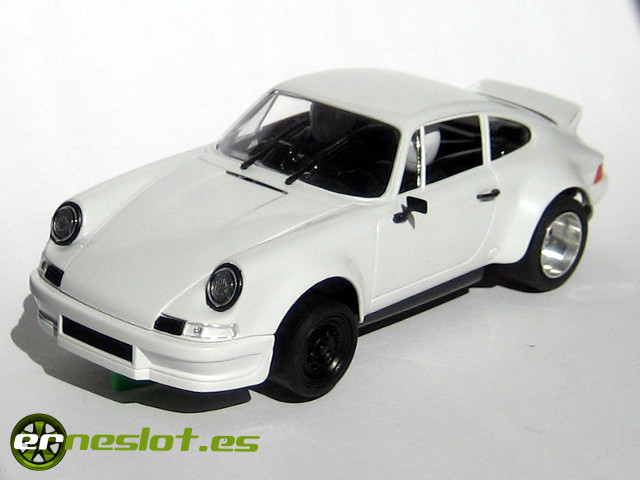 As is a " white racing kit" the slot car comes built but unpainted, the color is of the plastic with which it has injected, in this case white. This is an important work saving because we only have to remove the necessary parts (grilles, headlights, etc ...), smoothly sand the body to remove burrs and priming.

So without expect it, I had the slot car and had the delcas for its decoration so that I thought "let´s go to it". Being a white car, after a very light pass with sandpaper, I used Tamiya´s white primer. It is a veryfine primer that leaves a fantastic finish to the surface. It really was not necessary, but once the primer had dried, I gave another smooth pass with 1500 grain waterproof sandpaper to remove the imperfections that had been left. After washing the body and once dry I applied a couple of coats of Tamiya acrylic paint (white gloss), after the first coat I let the paint drying during 24 hours and then gave another smooth pass with very fine sandpaper to fix Some defects. The second coat of paint applied a little more diluted than the first ones and let the body dry well before putting the decals. 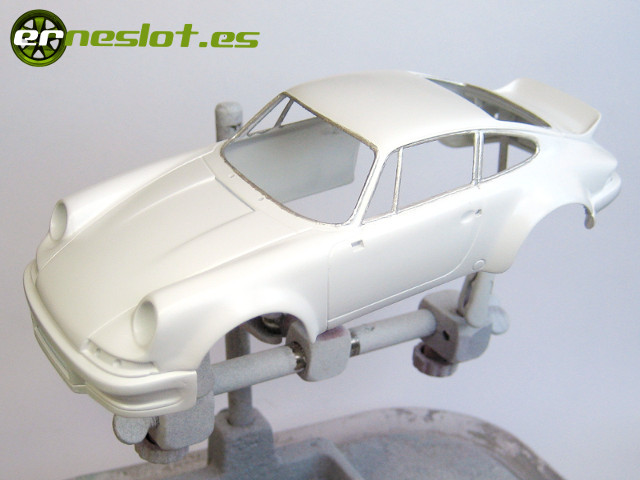 As a single detail, although in the shoot it can´t be very well appreciated, I painted the window frames with Vallejo gray paint by brush, which gives it a very real look. To make the cut of the painting the best possible, I masked the windows with thin strips of Tamiya masking tape, getting a very well defined lines.

The set of decals with the decoration was of an impressive quality, with very well defined logos and drawings and very correct colors. In the next photo show the set of decals I refeer. Undoubtedly, being a set of home-made decals developed ex-professo for the car in question, the fitting was perfect. The only difficulty I had was to place the door decals correctly so that the rest fit well. 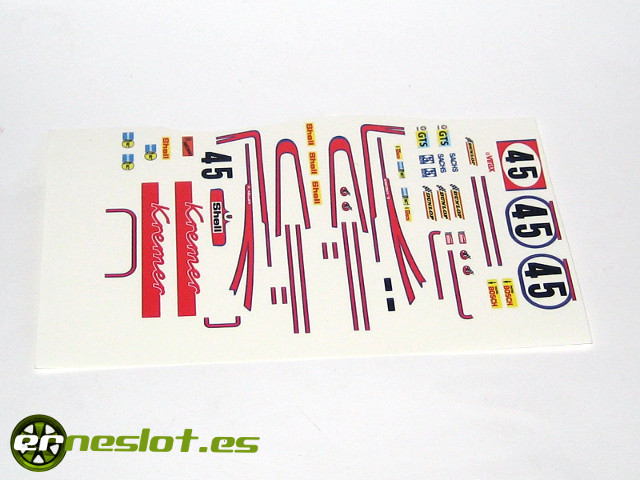 The declas placement had no difficulty because as I said is a set of very good quality and hanged on without problems the "delicate" treat that sometimes I give them. The decoration consists of many stripes that must be placed on the surface so that they fit together, that´s because it took me a couple of afternoons to finish it completely. When I put the decals I took my time to finish, I prefer that they are the best possible, and decorations like this involve paying close attention to their placement, which after two hours becomes a grueling task, so I It took me two afternoons to place all the decals correctly. Once placed the car was like this. 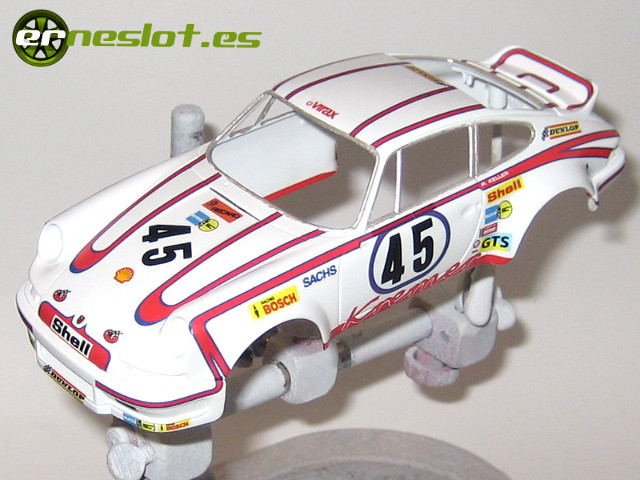 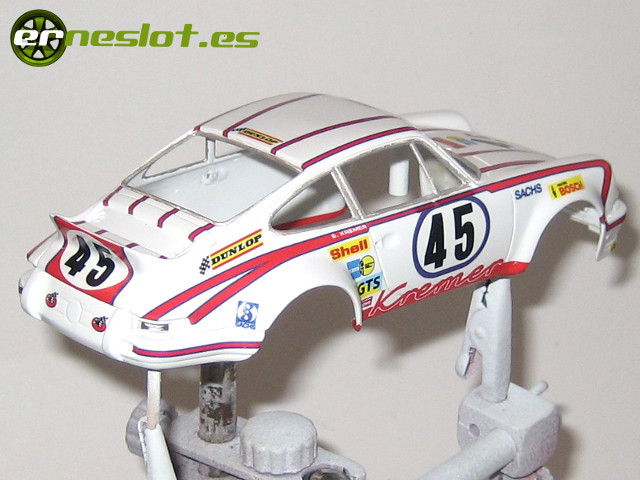 After letting the decals dry for a few days to make sure the drying was complete, I applied a coat of automotive varnish that left the body with a lot of shine and perfectly protected from the blows that the slot car can receive on the track. 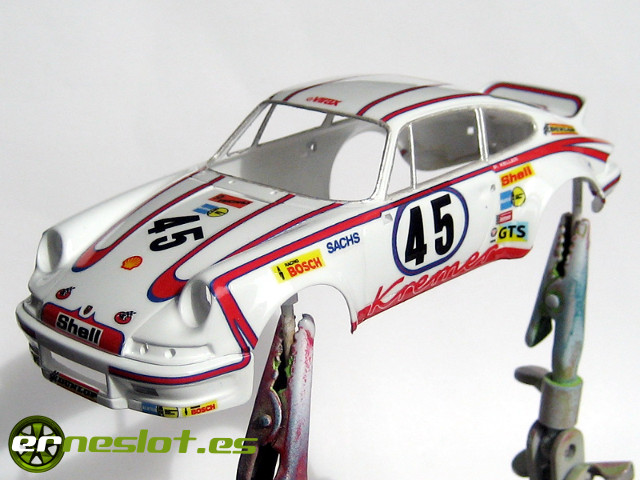 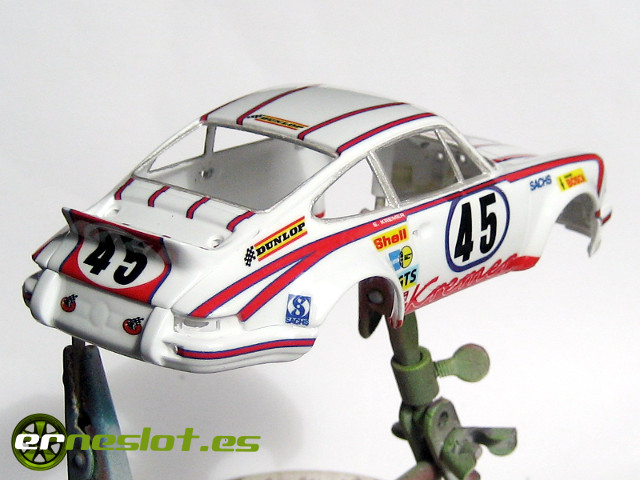 The interior did not require any work, since it is a thermoformed lexan half tray that I did not bother to decorate. I only painted the helmet of the pilot with Tamiya red acrylic paint to highlight it of the rest.

And so was the slot car after a simple assembly process, which was limited to gluing grilles, headlights and little more else. 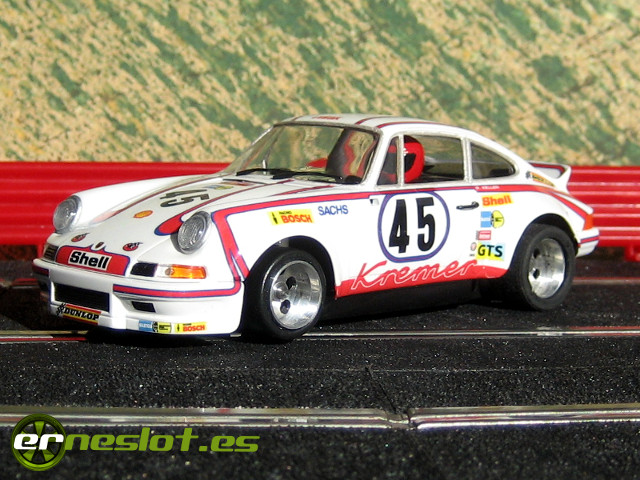 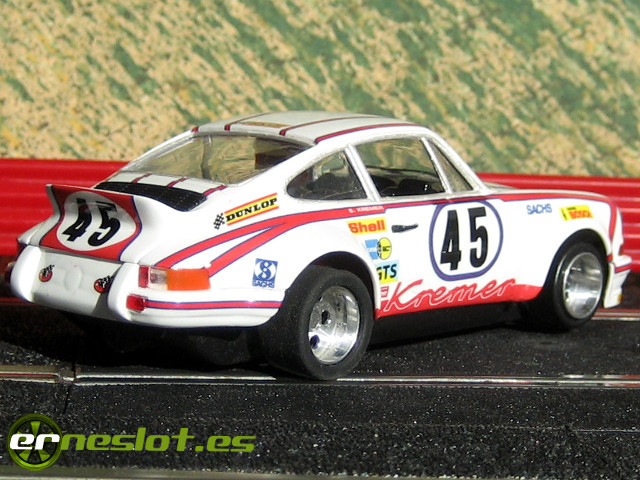 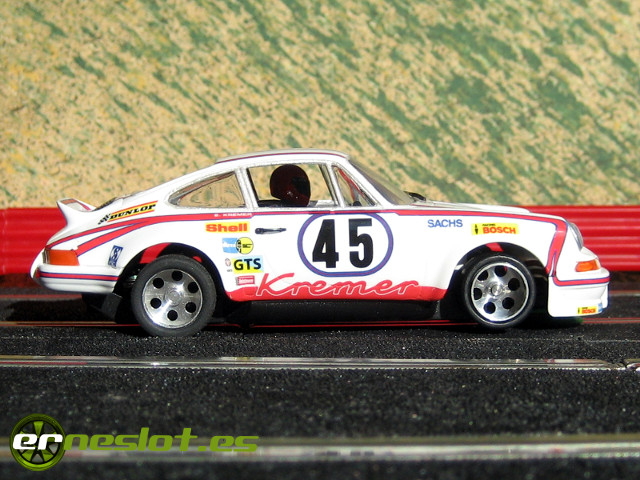 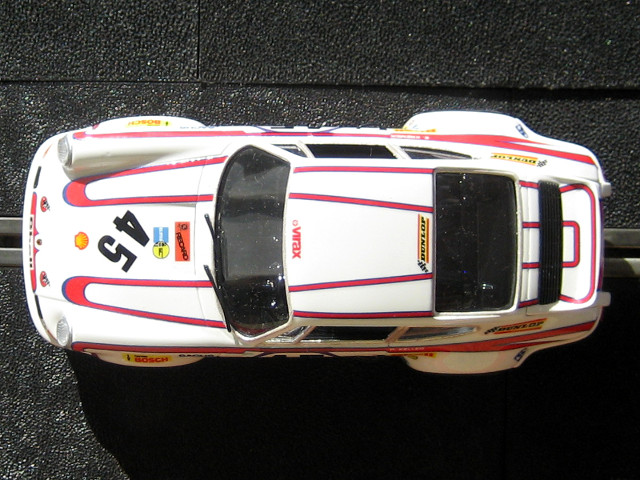 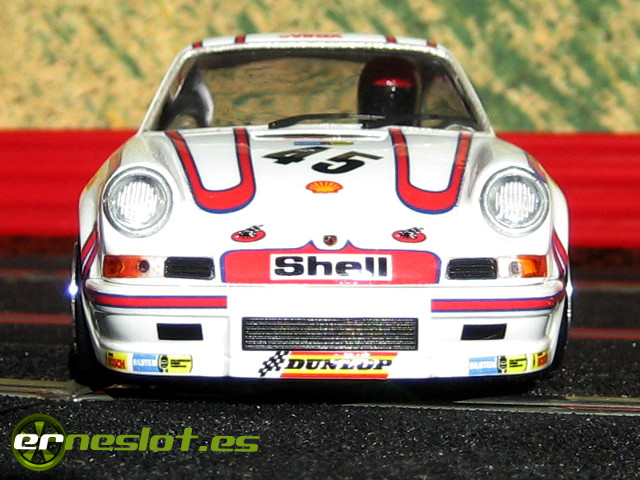 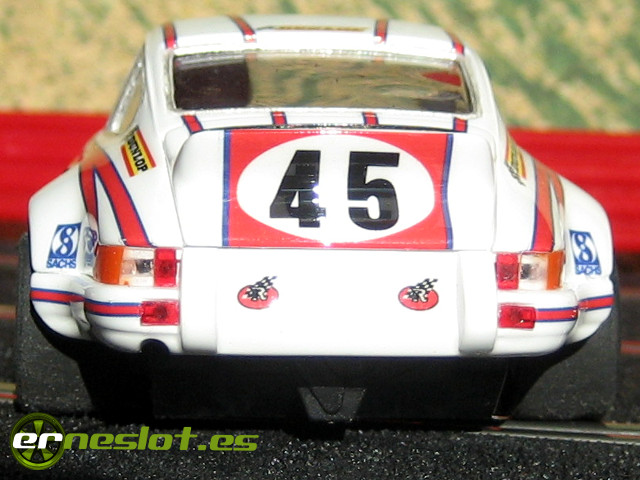 To finish the slor car I should put some inserts in the tires simulating the Fuchs rims mounted in the original car but for now I´ll leave it pending until I have time to make some silicone molds to make copies in polyurethane resin of the tires. Except that, I´m very proud of the work done. Really the merit is from my friend Raul who gave me some impressive decal sheet in all aspects, so that I only must to place them well to get a car as showy as this.
For those of you who ask about its performance on track, only say one thing: amazing. In spite of being a relatively short car, it develops wonderfully on the track, in large part, thanks to the great Avant Slot chassis. Congratulations to Avant Slot and Flyslot Cars for this beautiful and competitive car.