A few years ago I bought from a friend a bundle of Iwata HP-CS airbrush, various accessories such as airbrush cleaning cans, masking tape and a lot of Zero Paints paint cans, paint that until then was completely for me unknown. The amount of cans he gave me was tremendous, including primer, bi-component varnish, and assorted colors. Offhand, the first thing that caught my attention about that paint is that the paint is very light, because it comes pre-diluted and ready to use directly with the airbrush. According to the manufacturer, they are acrylic solvent paints (because they contain toluene) and that can be thinned with universal solvent (with toluene) apart from their specific thinner. The other thing that caught my attention is the number of different tones that can be purchased of that paint, in fact, this manufacturer makes infinite colors matched exactly to the tones of a specific car, that is, if someone wants the same shade "Ventura Orange" of a McLaren 570S, or the exact pink shade to paint the Porsche 991 RSR "Pink Pig" entered in the 2018 Le Mans 24 hours for example, Zero Paints has it, among many other tones. This is something that makes it very easy for anyone who wants to paint a car with its exact color. Apart from the colors, they have a complete range of primers (of very good quality) and lacquers, so that we can paint and finish a car completely from scratch only using its products with a very high level of finish, because the quality of these paints is very high. I will talk about these paintings in more detail later.

Among all the paints that included the batch I bought, one that particularly caught my attention was the Pennzoil chrome yellow (reference ZP-1099), a color especially indicated for the decoration of cars whose main sponsor is the oil company Pennzoil. The color is a particularly nice yellow with metallic reflections and as soon as I saw it I knew I would paint a car of that tone. In addition, the oil company Pennzoil has a long history of sponsorship in American competitions, both in single-seaters of the Indy formula and in cars from NASCAR and other competitions, and last but not least, I have always liked that livery a lot, especially in the single-seaters of the Indy. As an example, in the following image taken from indyracingmuseum.org Rick Mears appears with the car with which he won the 1984 Indy 500 with this decoration scheme: 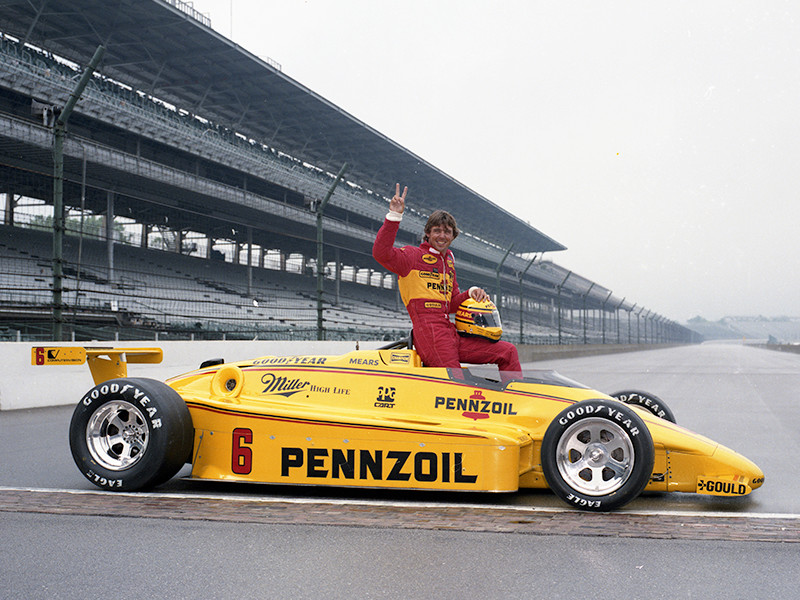 Or for example this other image of a much more modern car (almost 30 years apart), with Helio Castroneves at the wheel also in the Indy 500, but this time in 2019 with the same Pennzoil livery The image is taken from the page openwheel33.com, highly recommended with a large number of images of the single-seaters of the Indy from the last 10 years. 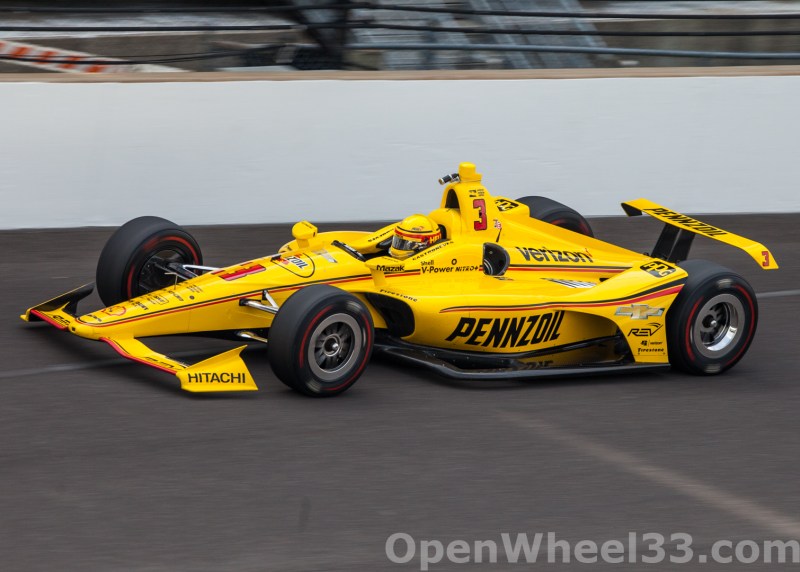 It can be said that the "Pennzoil" decoration is mythical in motor sports in the USA. and not only in single-seaters, but in the NASCAR championship it has also been used over the years among others by Team Penske. At this link you can see Joey Logano´s car decorations at the 2019 NASCAR Sprint Cup Series sponsored by Pennzoil.

I had decided the decoration but I was missing the car, and being a typically american livery the car should also be. To be honest, the car came to my mind at the same time that I saw the paint pot, the Chevrolet Corvette, an icon of American motorsport, and more specifically the NSR C6R, since in the store where I usually buy they had the model kit for build and paint (NSR reference 1071AW) and I bought it to decorate it. The kit came complete with unassembled bodywork and complete mechanics with the usual high quality of this manufacturer. This image shows all the components that make up the bodywork and all the pieces came in the kit. 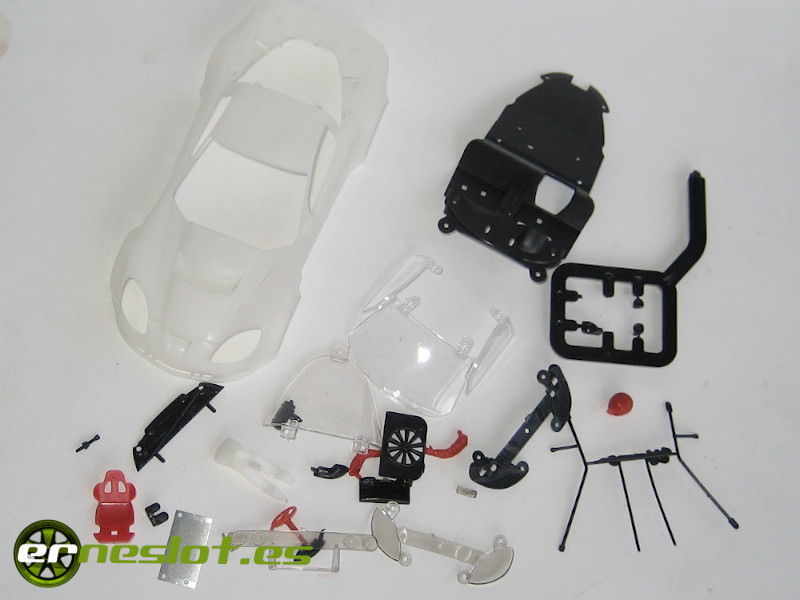 The slot car decoration process was very simple. In order to highlight the color, and following the advice of the paint manufacturer, after a smooth pass with sandpaper to the entire body to remove burrs and slight defects, I applied a coat of white Tamiya spray primer. The Tamiya primer is very fine, it leaves a very smooth finish to the entire body and adheres very well to the plastic, so if we apply it carefully, it is practically not necessary to sand it after its application because it covers very well and very homogeneously.

After leaving the primer to dry well, I usually leave it for a day although it is not necessary for so long, I applied several coats of the paint "Pennzoil chrome yellow" reference ZP-1099. Zero Paints paints come pre-diluted for direct airbrush application. In practice, what we have is a very diluted paint that covers very little, so we have to apply many coats to achieve good coverage and a homogeneous color throughout the surface. The manufacturer recommends about four coats of paint over a white base to enhance the color, but in this specific case I applied 6 or 7 coats of paint, I do not remember exactly, until it covered completely the body. As it is such a diluted paint with such a fine pigment, despite applying so many coats the paint did not cover any detail of the bodywork, achieving the following result: 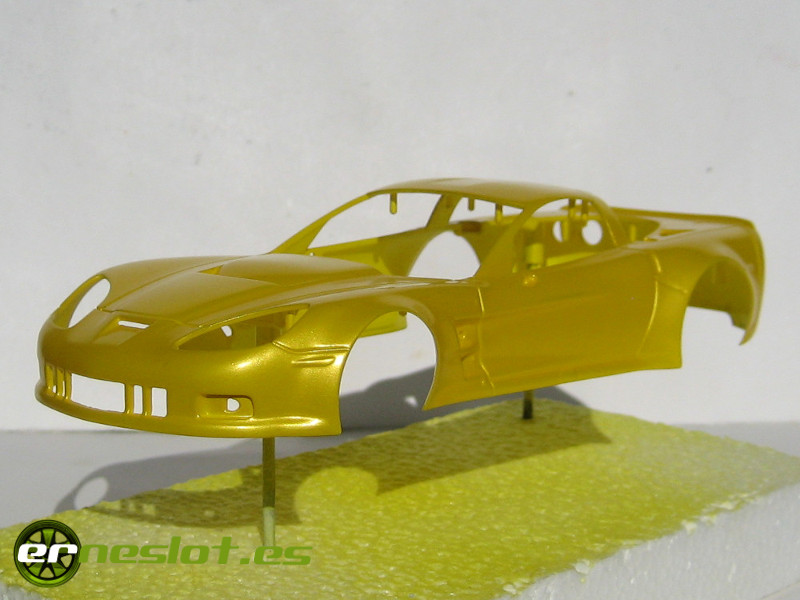 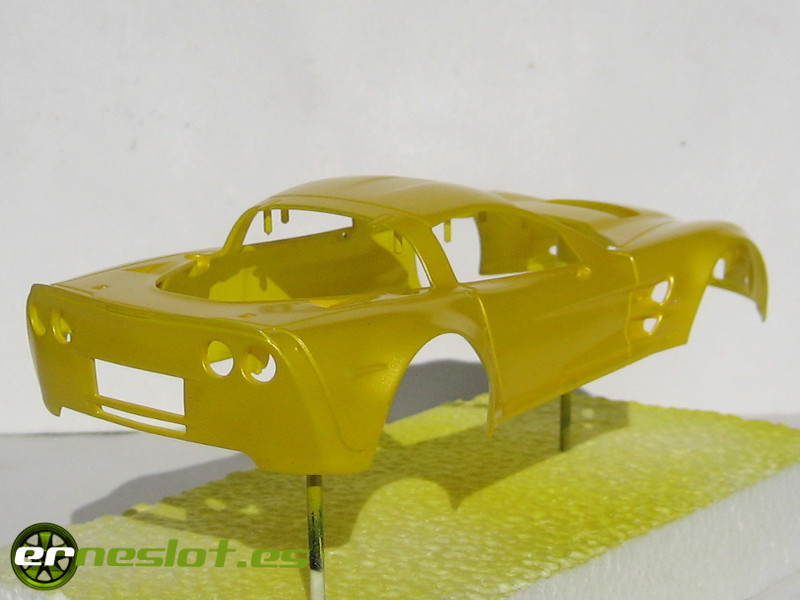 The photos do not do it justice because I´m a very bad photographer, but the color is beautiful, with a yellow color with a very beautiful greenish tone. For my taste it is a beautiful color.

Since I like to take advantage of my cars to test new techniques or types of painting, I took the opportunity to improve my masking skills and also to paint with Humbrol enamels, so that I carefully masked the back of the car, trying not to let any paint seep under the masking tape and I painted it with Humbrol gloss black enamel (reference 21). Humbrol enamel paint is quite thick so it must be diluted enough with Humbrol enamel thinner to apply by airbrush. But once the proper fluidity is achieved, it applies perfectly with the airbrush and covers very well, although it takes a long time to dry, so when I applied the black paint and carefully removed the masking tape, I let it dry two days before touching the car, achieving the following result. 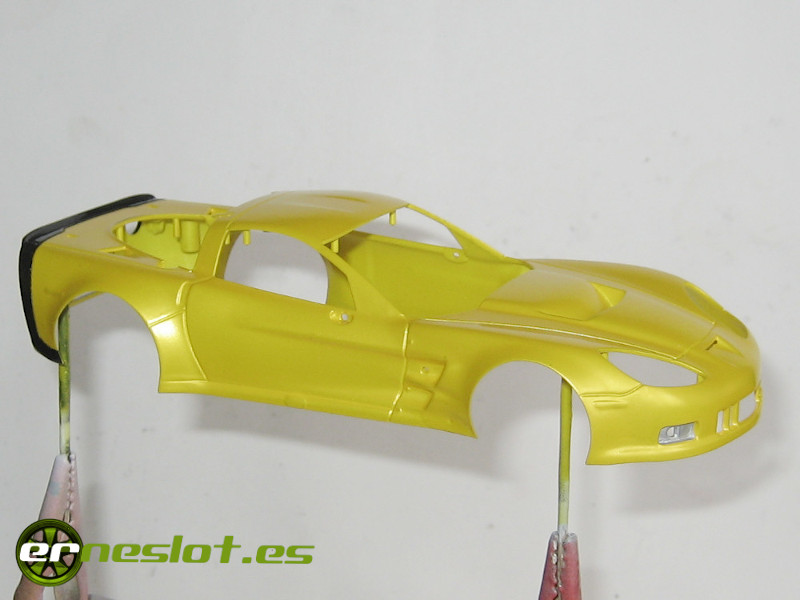 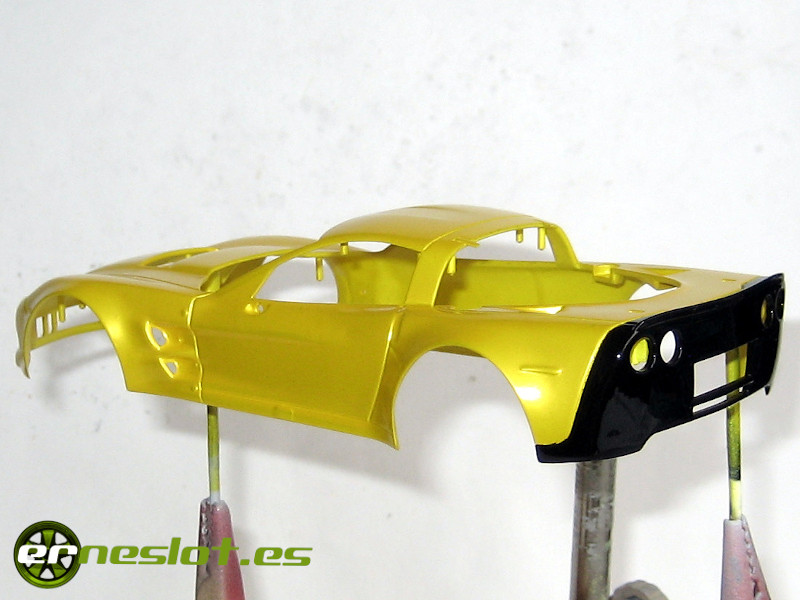 The cut between the colors was very good, which makes me very happy because it is something that did not completely dominate and the black was very homogeneous, very well leveled (probably because it dries very slowly) and with a very nice shine. It also did not affect yellow paint at all, despite being different types of paint. In this sense, the tests were 100% correct.

The rest of the decoration of the car was made with waterslide decals. I wanted to make a simple decoration and very little ornate, so that the logos would be few and what could not be missing were the logos of the oil company and the black and red parallel stripes typical of the Pennzoil decoration scheme running longitudinally through the car. I also wanted to make some numbers in the style of NASCAR cars, which I quite like, and together with some small logos I finished the decoration, which once printed looked as follows: 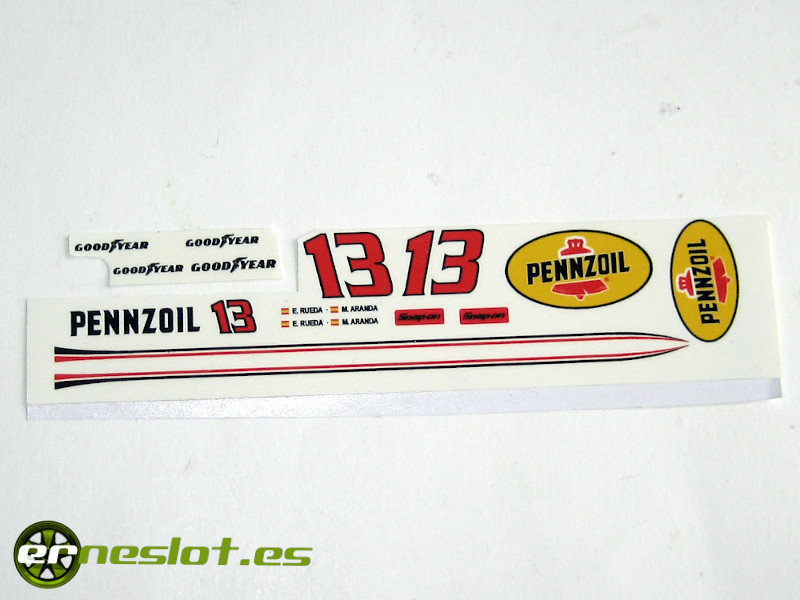 As you can see a fairly simple decoration, which is what I intended to do. This, which seems so easy to do, is sometimes difficult to achieve, because I am always tempted to include one more logo and in the end, the simplicity of the decoration is lost, and incidentally, the elegance of the model.

The placement of the decals was very simple, even the stripes on the sides had little difficulty, since when I make the waterslide decals I try to make them quite resistant by applying three coats of protective varnish on them, and generously moistening the surface, they can be handled with ease.
After letting the decals dry well, I applied two coats of automotive varnish to protect the decoration in the usual way: the first, carefully so that it covers the entire car well, trying to make it look as good as possible but without worrying excessively about the final result, the function the main thing is that it covers the entire surface well. After letting that first coat of varnish dry well, for at least three days, although I usually leave it to dry for about a week, I gently sand the surface of the car with 1200 or 1500 grit sandpaper, to eliminate dust spots or defects that have left after applying that first coat of varnish and wash the car. I dry it with a hair dryer and apply the second coat of varnish, this time a little more diluted so that it levels more easily on the surface, and taking great care that it is well applied and that no dust falls on it to damage the work. After letting this second coat of varnish dry for about a week, the body was like this: 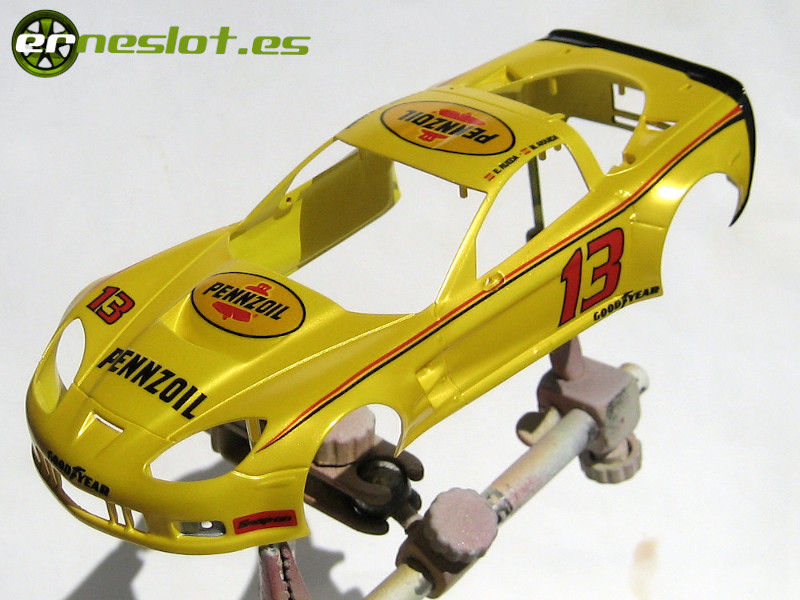 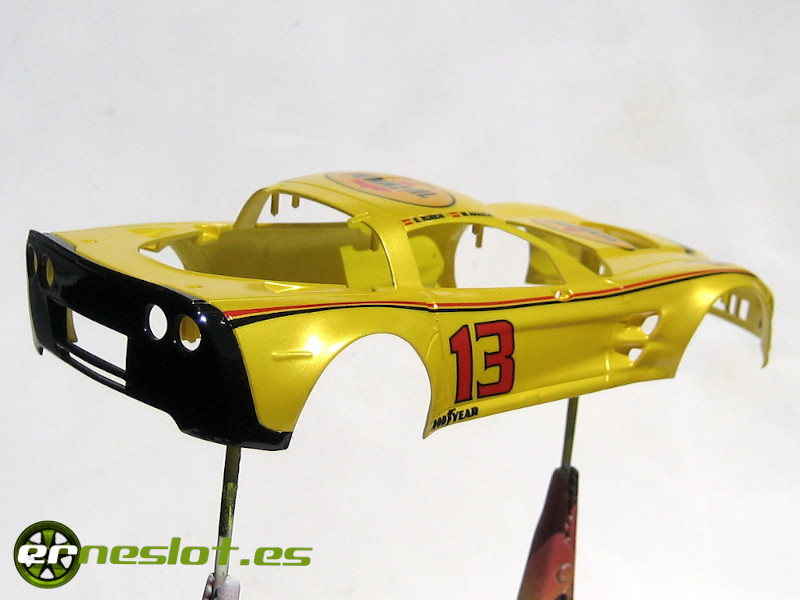 The decoration of the interior, as I have been doing lately, was based on the metallic gray color (Tamiya reference X-11 applied with the airbrush) for the tray and the roll bars, and the matt black (Tamiya reference XF-1 applied with the airbrush) for the dashboard, seat and rear of the passenger compartment. The rest of the components are painted with Vallejo acrylic colors except the fire extinguisher, which I painted in Tamiya X-7 gloss red. Little by little I am getting to paint the interiors a little better and with more chromatic variety. 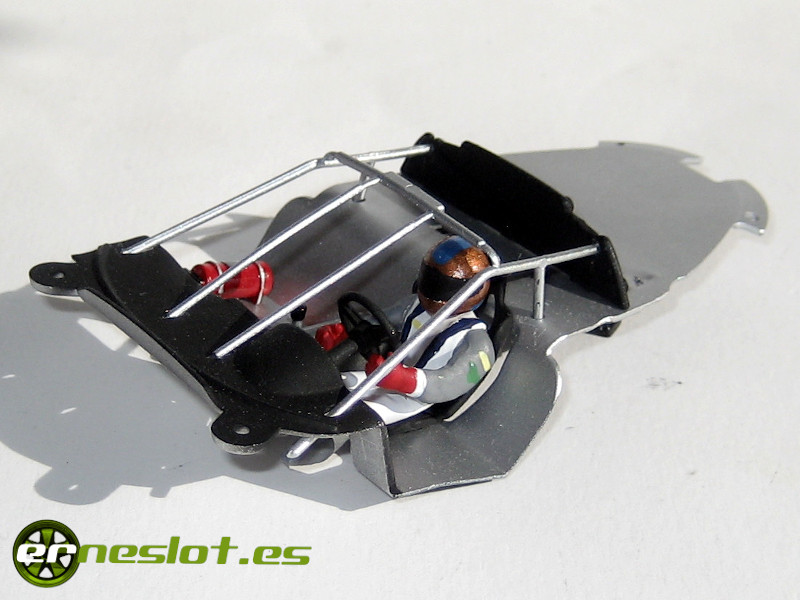 I paint the rest of the body components as follows: 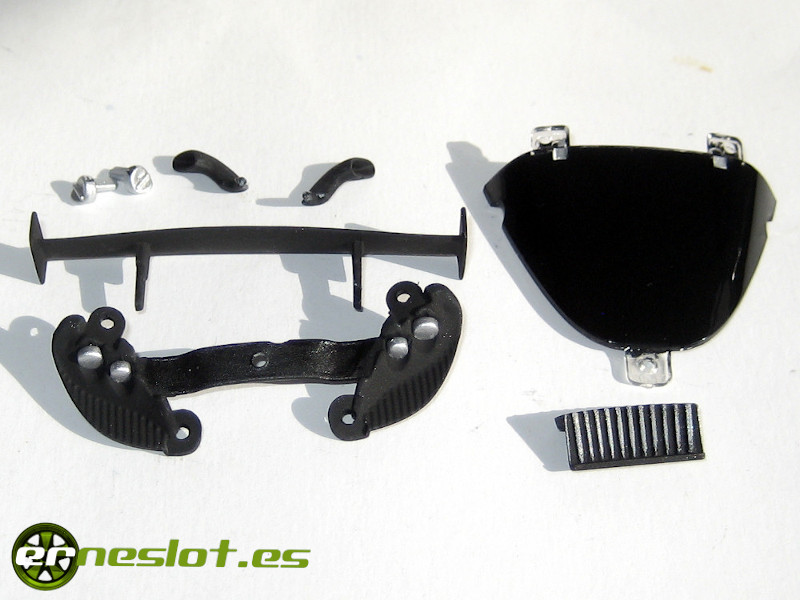 The car´s chassis came fully assembled, so I only had to put the hubcaps on the wheels, after having painted them with Humbrol matt black enamel applied with the airbrush. 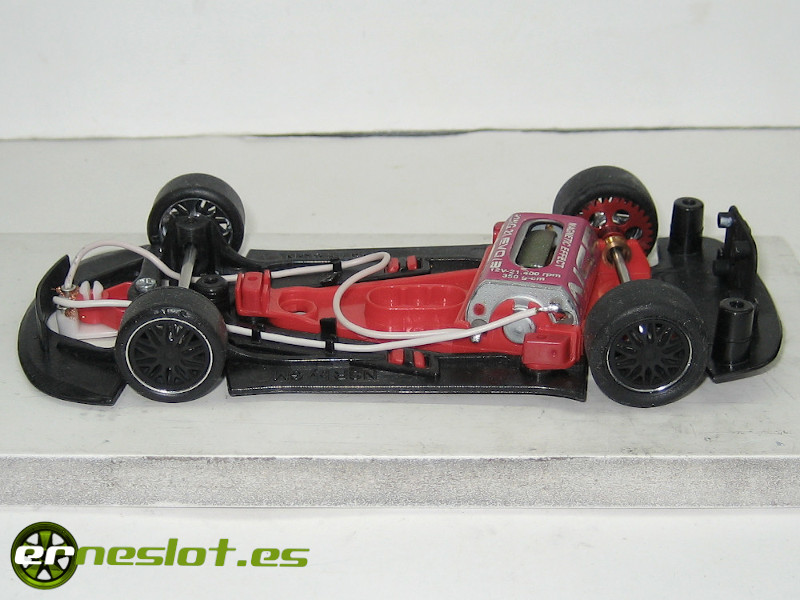 The rear fan is an independent part of the chassis, I painted it in the same way as the hubcaps and, as I did with the radiator, I applied the silver color reference 70.997 of Vallejo with the dry brush technique to give it a little depth with the result that you can see below: 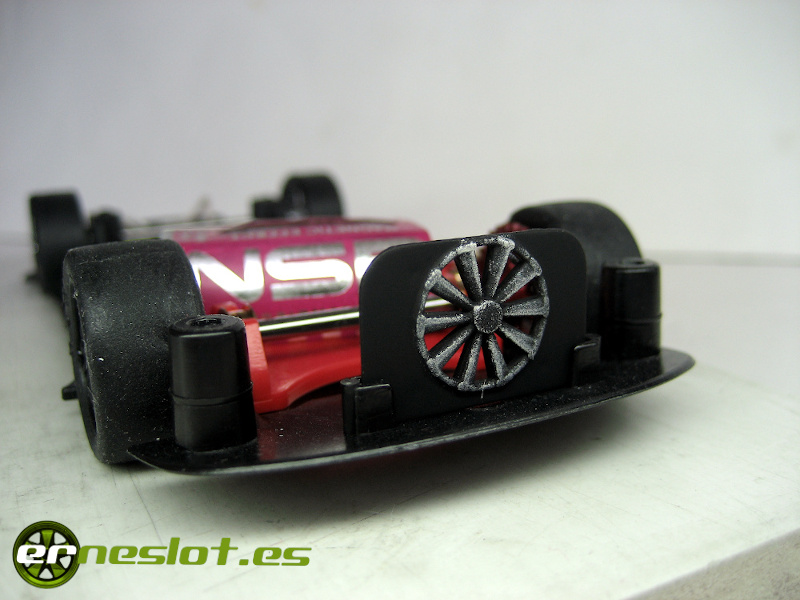 Finally, it only remained to paint the windows so as not to leave them completely transparent and the car´s headlights. I painted the windoews and the windscreen on the inside with humbrol enamel applied with the airbrush. Previously, I had placed masks made of adhesive paper so that the paint only remained on the edges of the windows. I painted the taillights with Tamiya X-27 translucent red once they had been fitted to the body, so that the paint would not scractch during its instalation.

And after a careful assembly process with an solderin iron of all the parts that make up the body and after fitting the chassis and body, the slot car was as follows: 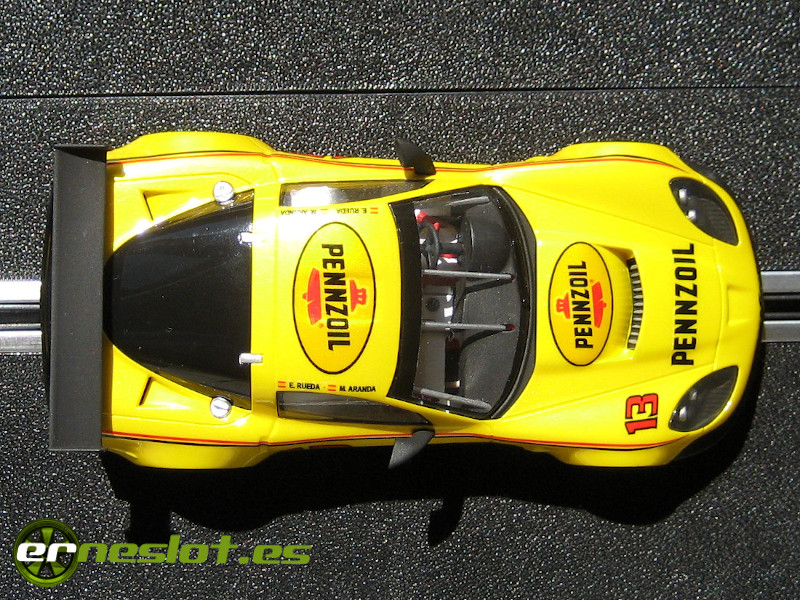 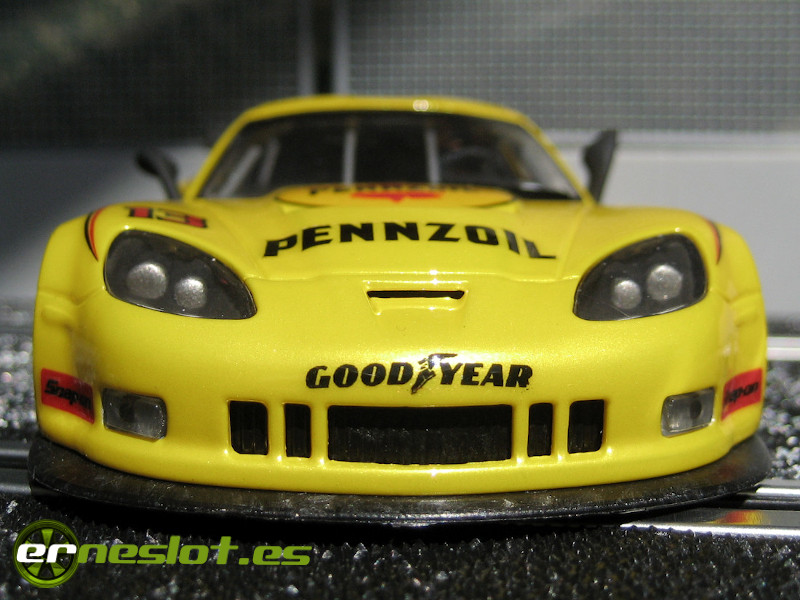 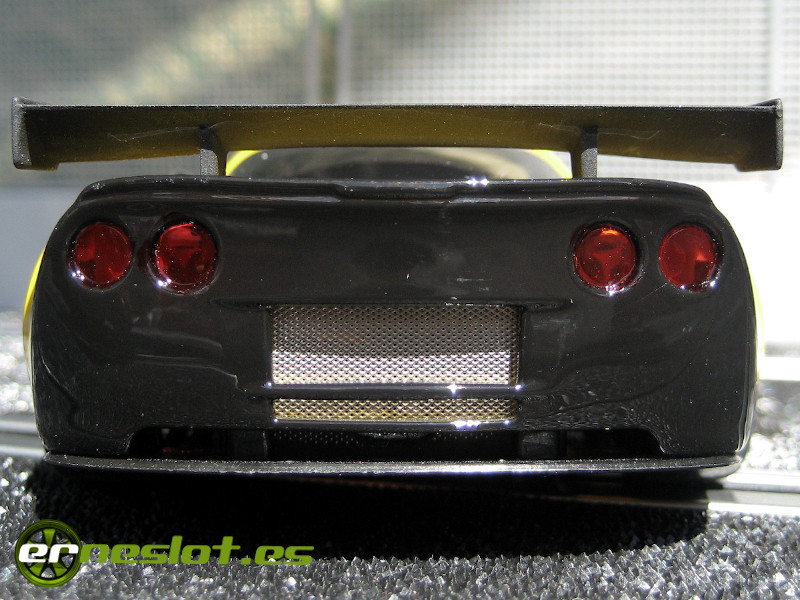 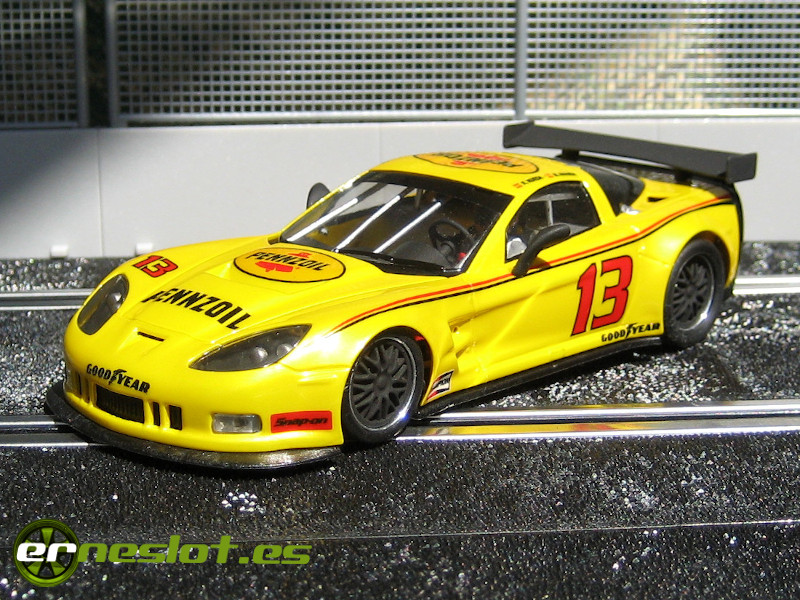 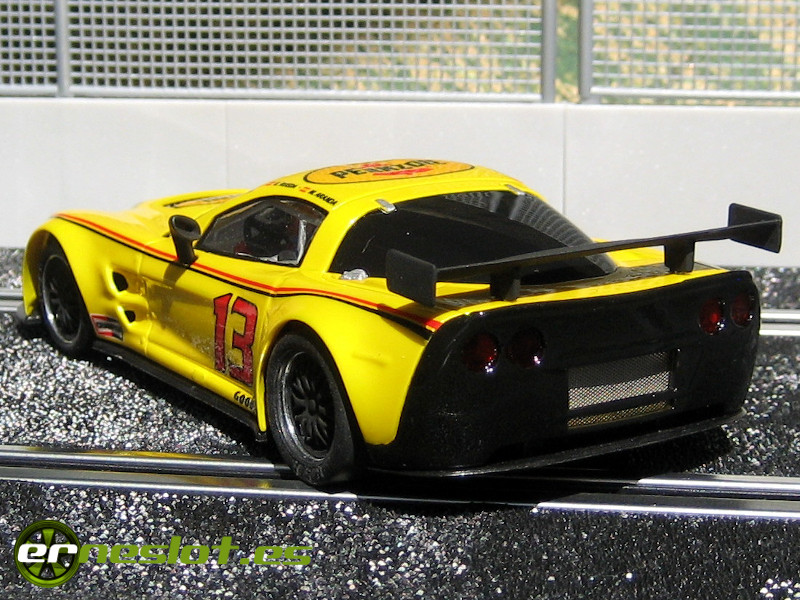 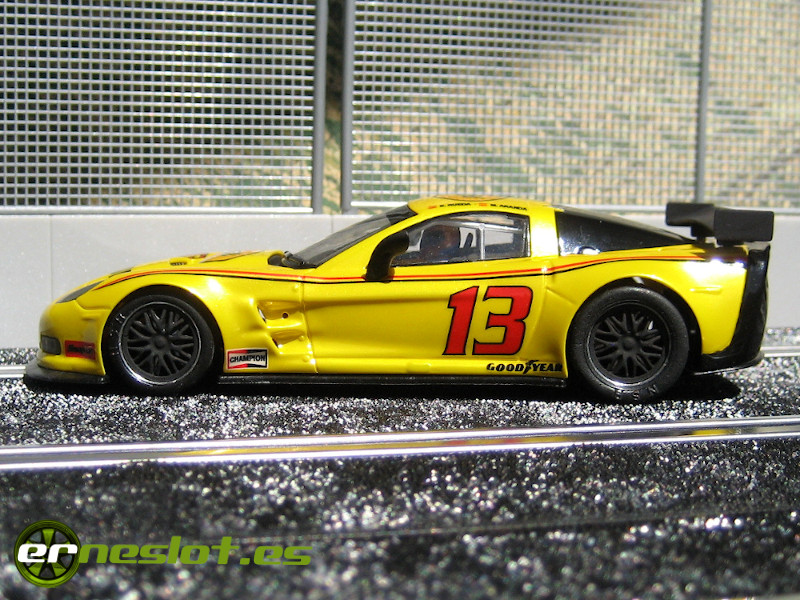 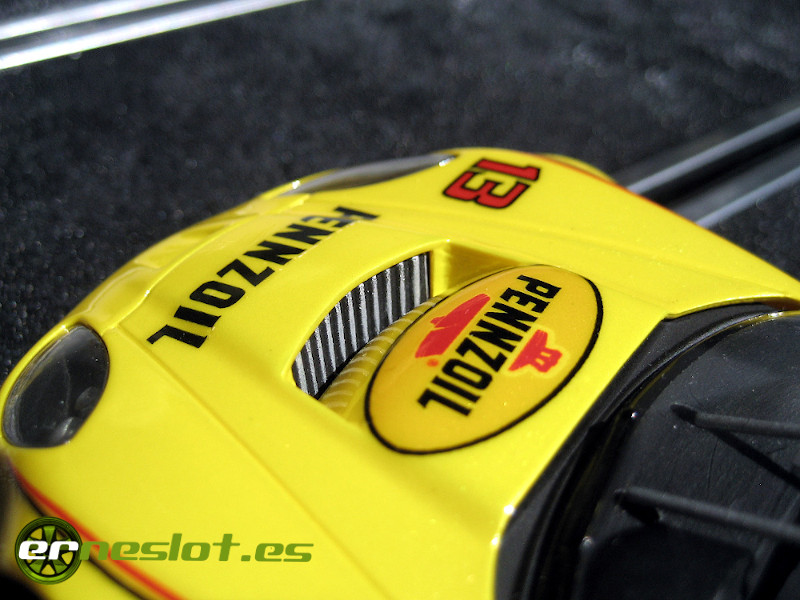 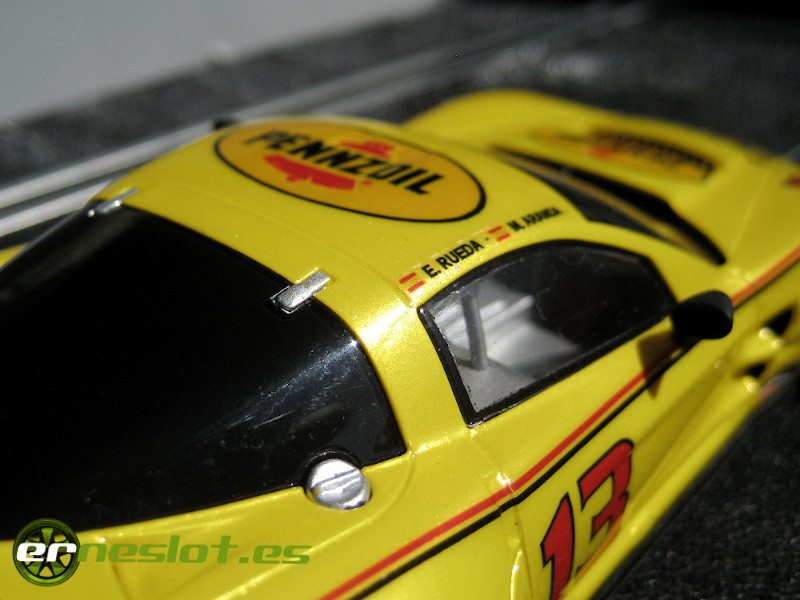 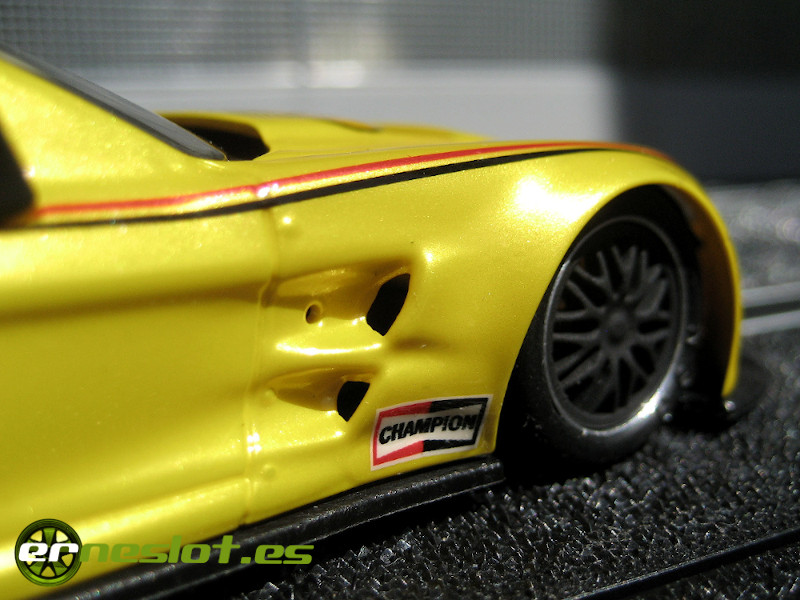 It is a pleasure when build a slot car works so well. All the tests I have done on this car have been successful, the tests with the paint, with the masking, the simple but elegant decoration, the varnish very well applied, the result as a whole ... I have rarely been so satisfied with a decoration. I am really satisfied with the result, and being as I am so particular and demanding, that is saying a lot.