For the 1977 season Porsche developed the model 935/77 based on the 935 who such a good result had given the last season. The body had slight variations from the previous model in order to improve aerodynamic efficiency, such as wider wheel arches, a front bumper over worked, the addition of a second plexiglass rear window over the existing one, modified aileron to improve the aerodynamics of the rear, or the integration of mirrors on the hood of the car, something that the pilots were not amused (coudn´t see anything through them.) Regarding the mechanics of the model, Porsche has developed two variants:

The official team, sponsored by Martini, won four of nine races of the world championship that year, the first of its debut at Mugello 6 hours, winning Rolf Stommel and Manfred Schurti. The other three victories were by Jacky Ickx and Jochen Mass (6 hours of Silverstone, Watkins Glen and Brands Hatch).

Besides the three official cars, Porsche developed another model with chassis number 935 01 001 to participate in the 2 liters class in the German touring car National Championships, DRM, precursor of the current DTM. For this, the build a 935 with a 1425 cc. engine with a single turbo called Typ 911/79, which developed 370 horsepower at 8000 rpm for 750 kg. weight. The car, known as 935 "Baby" by the size of its engine, won the DRM Hockenheim 1977 race with Jackie Ickx at the wheel. 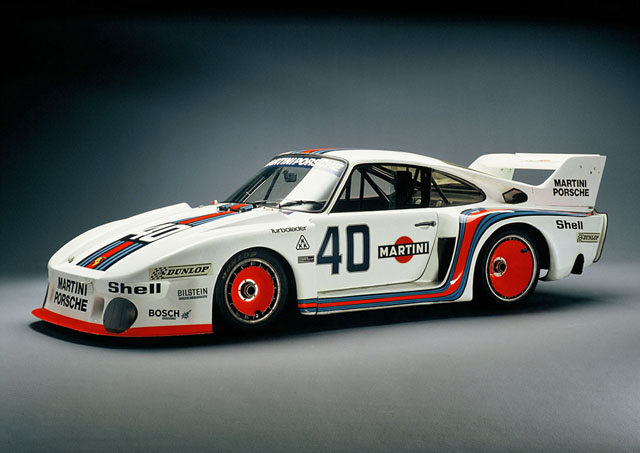 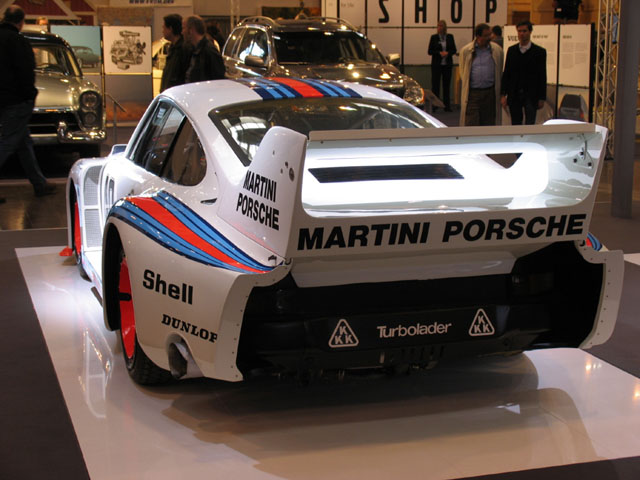 In this link you will find more pictures of the car:


The model I´m going to build is the one who competed in the 6 hours Brands Hatch in 1977 with Jacky Ickx at the wheel, with chassis number 935 77 005, which is what can be seen in the following photos taken from the previous website. 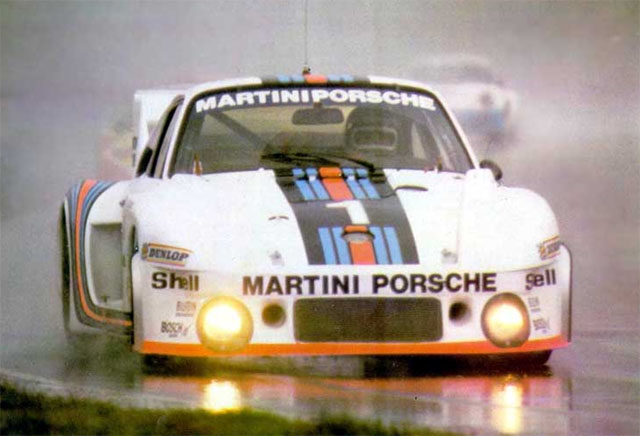 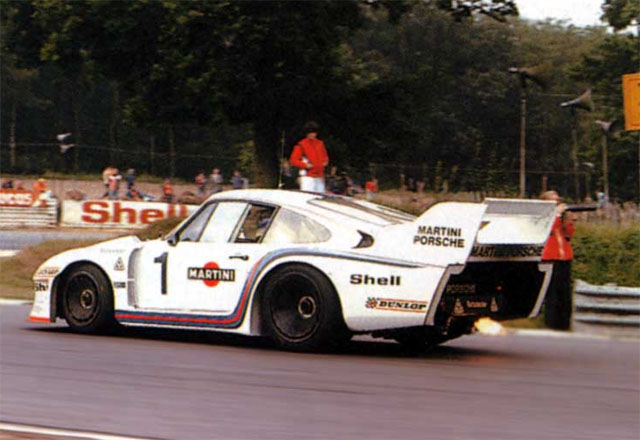 To do it, I start form a Altaya Duelos Míticos collection Porsche 935 body shell, unpainted after a few minutes inmerse in alchool. 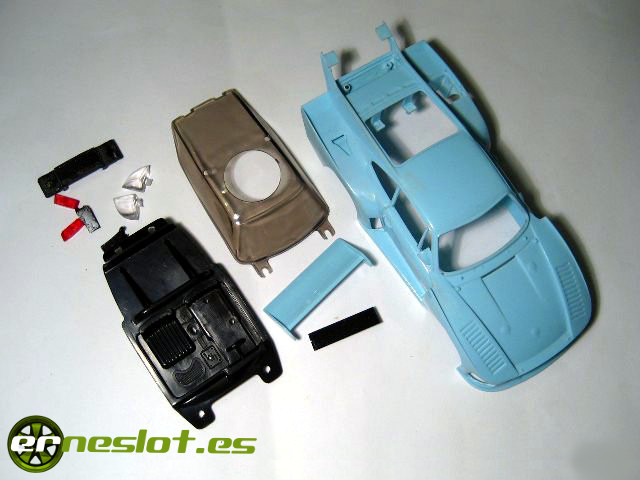 The chosen chassis to motorize the car is the Fly Car Model Porsche 911 one. The body has lots of room in the back so there isn´t problem to fit this chassis, which has the same disposition of the engine as the original car. On the other hand, having rear engine allows me to do a complete interior to the car in case I want to, I have not decided yet.
The chassis is attached to the body with four evergreen plastic pins, the two rear building on the original arrangement of the chassis screws. The two front I put them on both sides of the guide because I have to change the position of front axle and if I let them will bother me where they are. 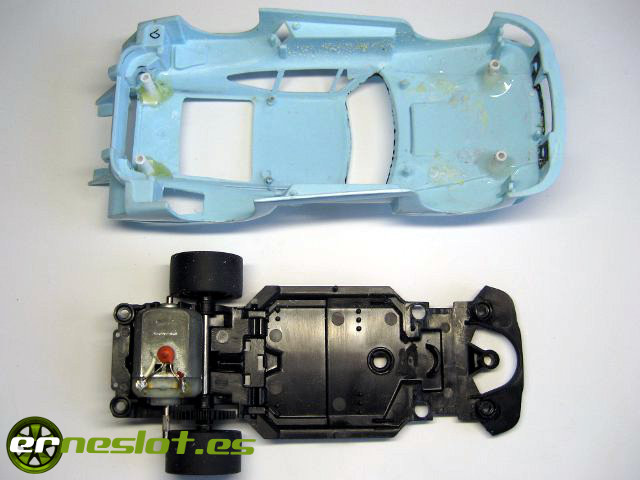 I going to try to make the car from front to back. First, I want to fit the right wheelbase to the car. I had cut the front axle supports from the chassis for two reasons, first, the wheelbase of the original car is 2271 mm, which gives about 71 millimeters at 1/32 scale and the chassis was a few millimeters longer. The other reason is that the nose of the car is more elongated than in the starting model (the 935 K3), to cover the difference in length, I will delay two millimeters of the front axle position and fill the space between the wheel and the front apron.
Change the position of the front axle is as easy as cutting the original brackets on the chassis and make some new ones with a few pieces of evergreen: 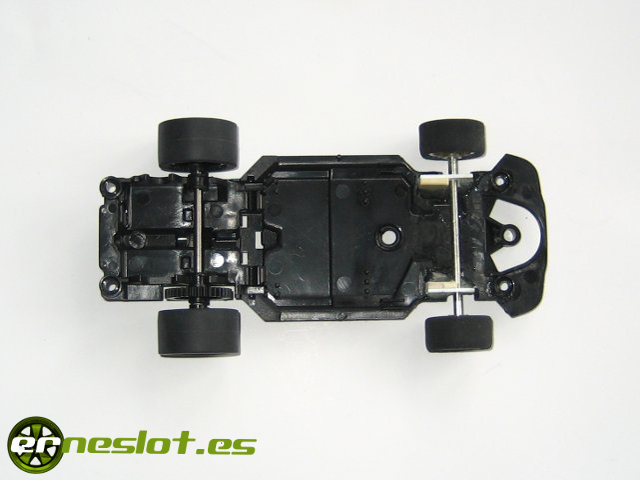 To make changes in the body, hit in the interior evergreen plastic pieces that would serve as support for the putty. 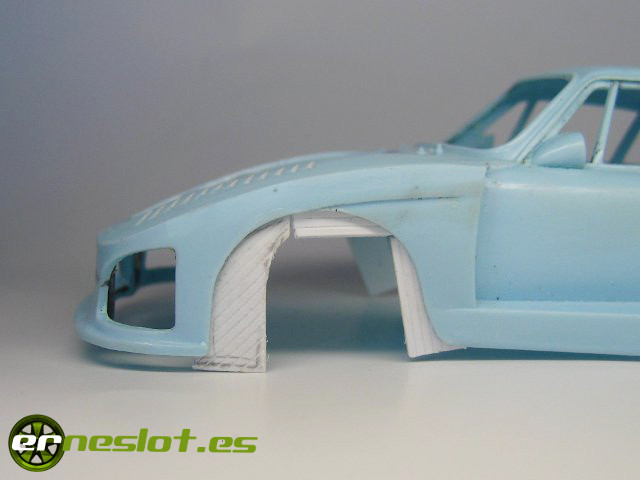 And I marked the places where it should apply: 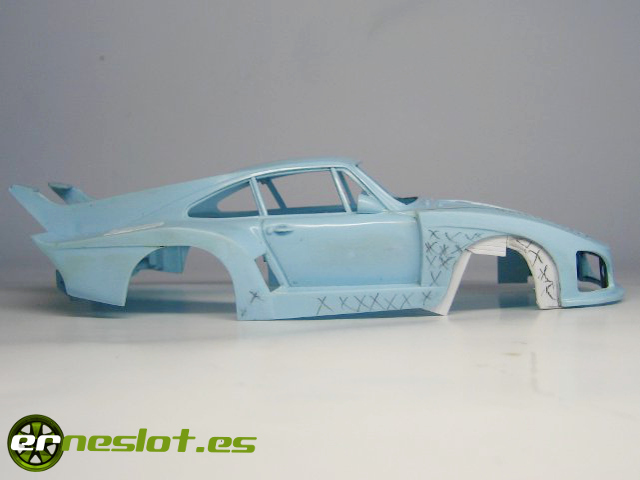 The higher air intakes were useless to this model, but instead of clogging, I cut them out in case would be useful in later times. I covered the resulting hole with a piece of plastic stuck inside with bicomponent glue. 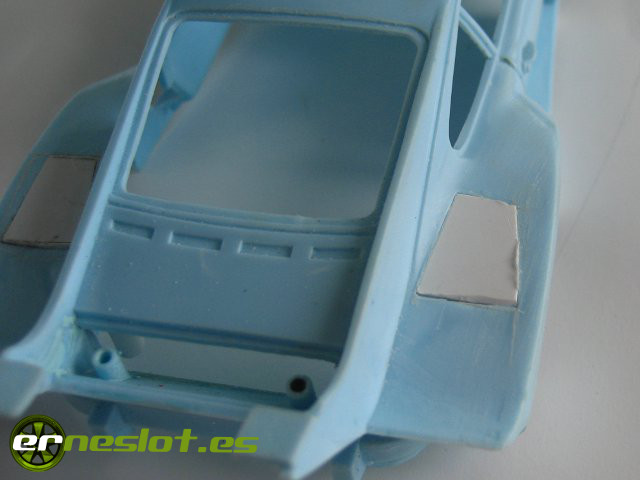