If there is a car that I´ve always loved (along with the Porsche 911) is the Lamborghini Countach, with its futuristic and timeless timeless look it has, and with its particular way of opening the doors that is so much aprecciated in the current car tuning. Autoart made a very good reproduction of the model (like almost everyone they made, but on the track are not a wonder), but I would not buy it. In the slot club where I usually ran once saw a fellow with one who had done from a model kit and it was clear that I too would make one.

Here there are a couple of pictures of the original car. 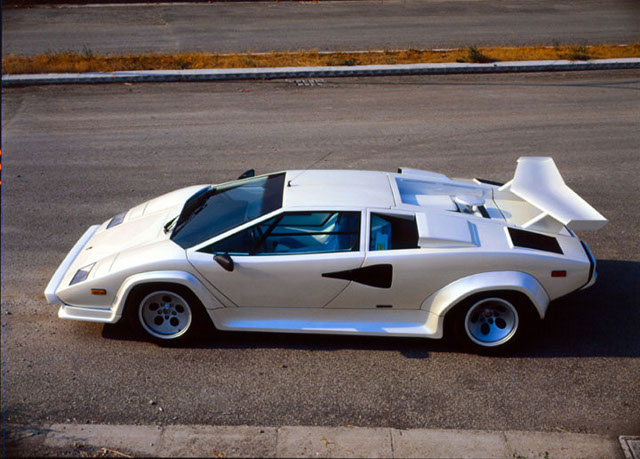 We start from a Snaptite Monogram series simple kit, as shown in the box is of no glue needed because the pieces are embedded inside each other making it easy enough the transformation to slot car. Furthermore, the intention was to maximize the use of the pieces of the kit, respecting the mechanical layout of the original car (in that sense I´m quite "strict") and ensuring a good performance on the slot track, logicaly without trying to make a LMP .... Therefore, instead to choose a comercial chassis of a car I used the characteristic of the model adjusting a Fly Car Model engine pod. These are the pictures: 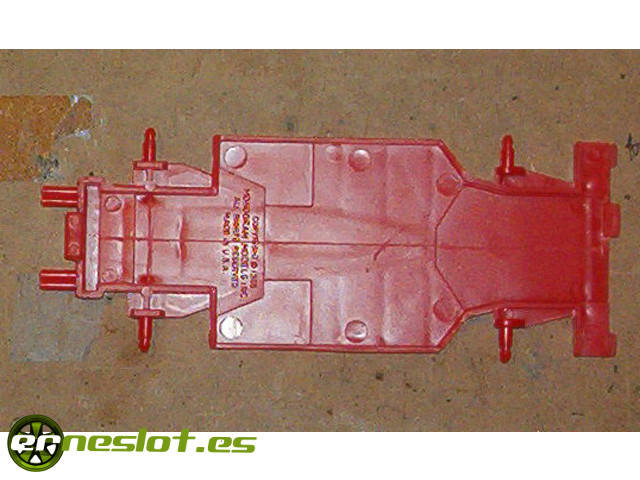 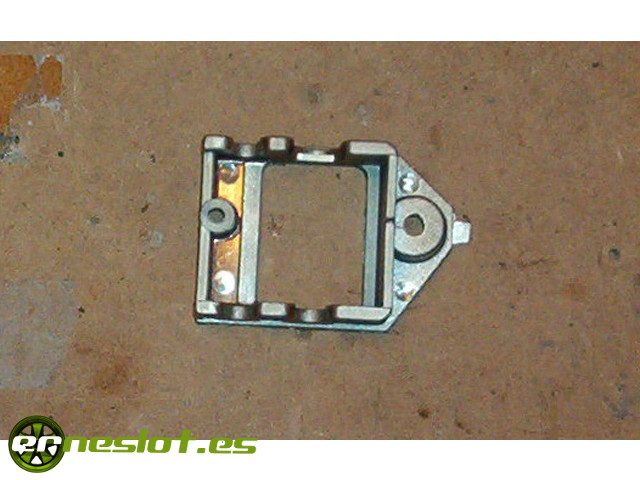 Furthermore, this arrangement of the engine pod allowed me to use the interior of the model and thus make a more faithful reproduction of the car. The problem is that had a lot of work to adapt the pod to get the proper distance from the wheels to the ground and also make it look good. So I had to sand the bottom of the pod and make a hole to the chassis of the model for the engine to hang a bit. After that I hit the pod to the chassis with cyanoacrylate being very careful to be perfectly centered and leveled, what it cost me to hit and take off a few times. Once I gave it all well placed I reinforced bonding with bicomponent glue (Araldit transparent) and cyanoacrylate with baking soda at some points. The chassis was as follows: 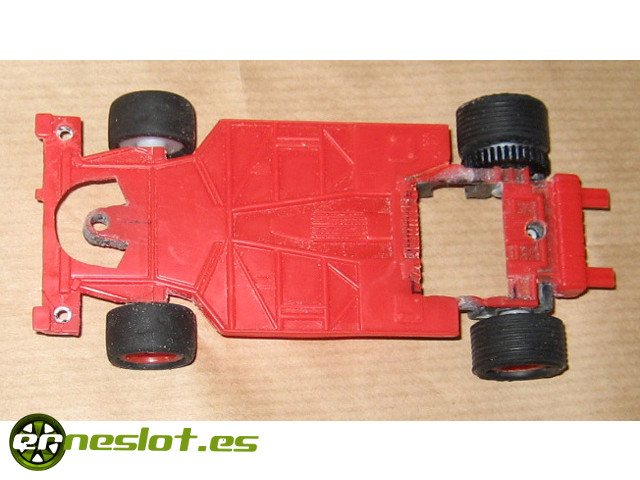 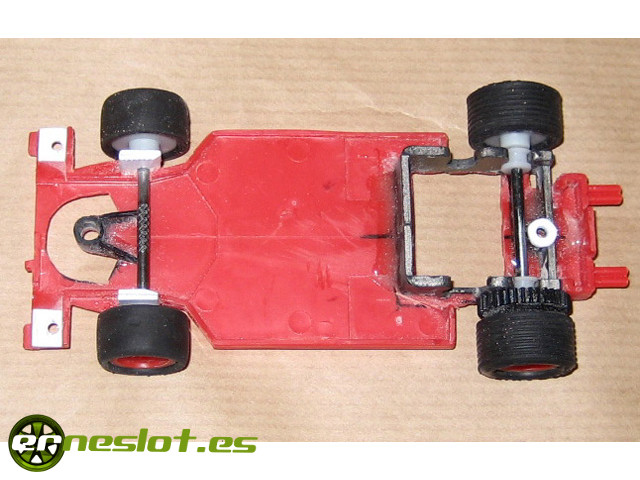 I wanted the model to behave well on track so I was worried that the chassis have adequate tilt with respect to the body. To do this, the joint of chassis and body, was by three pins, two in front and one behind, made with a evergreen pipe pasted with bicomponent glue. I took advantage of Hornby's old chassis to made the support of the guide, while the front axle supports are two pieces of evergreen with elongated holes that allow the front axle have a bit of swing. In the next photo shows the stubs of the body, glued with Araldit: 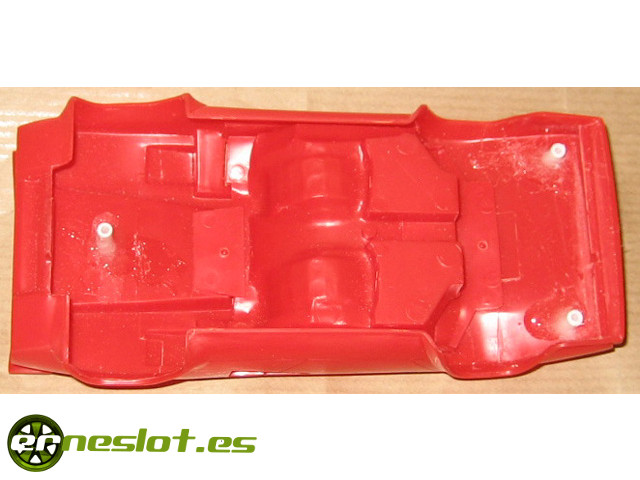 Once adapted, the chassis of the car I went to make the wheels of the model. This model has, in my opinion, one of the most beautiful wheel that have been made for a sports car. But to my knowledge, so far I have not seen any manufacturer to take them as spare parts for their cars (unless we use a Countach from Autoart), so I took the scale model ones. Rims really were not as such but a kind of hubcaps that was not easy to adapt directly to the car, so I chose to use as a hubcap for a 15 mm Slot.It rim. So I used pieces of the model and made a perfectly centered wheel. I do not have any photos of the wheels as they have come in the kit but the result after pasting the hubcaps on Slot.It rims was this: 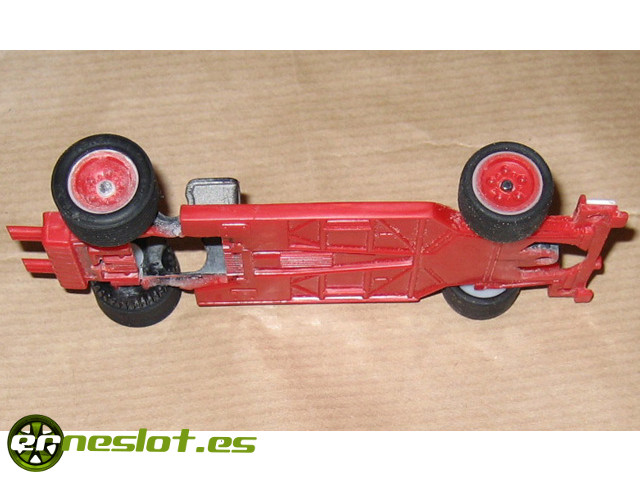 And once painted down to this: 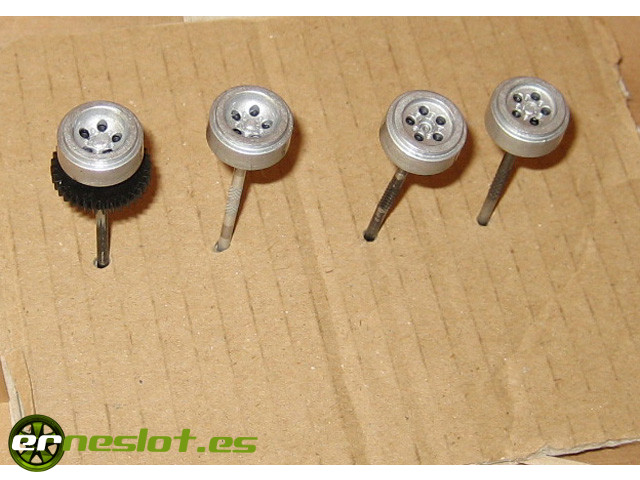 In the body I didn´t make major changes, all I did was to open the side air intakes to give the car a bit more realism. These are the pictures of the original bodywork and then with air intakes open. 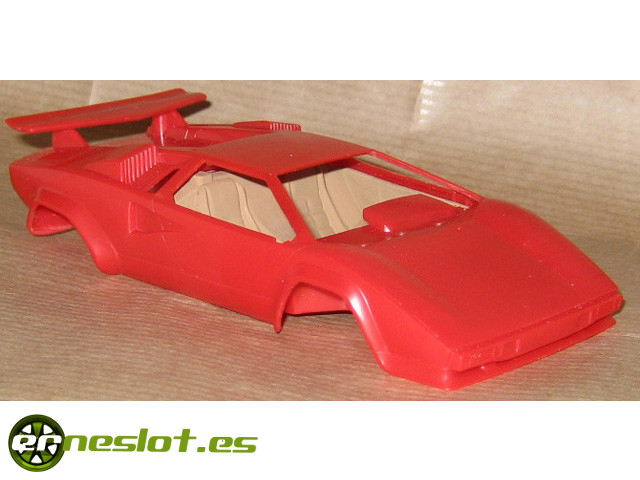 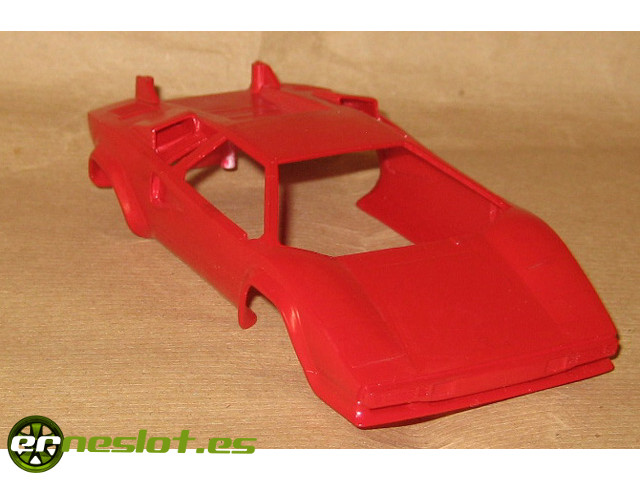 Continuing with the adaptation of the model, the next step was to take it to the upholsterer and paint shop. The chassis of the car was painted with Tamiya matt black enamel applied with paintbrush. In the absence of the final coat of paint applied with the airbrush, the result was this: 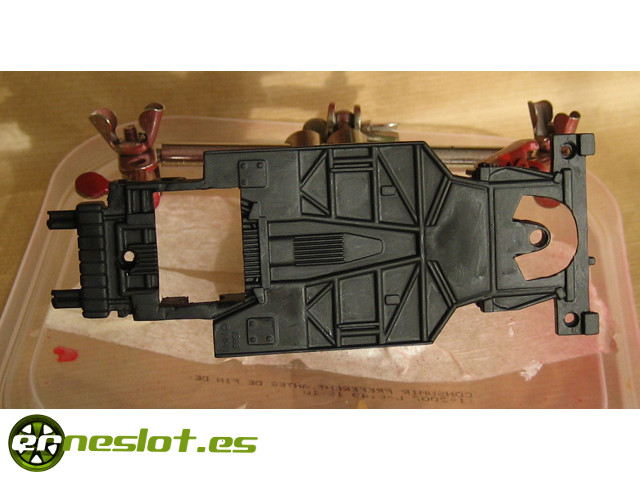 For the interior of the model the chosen color was Tamiya yellow desert (acrylic) for the dashboard and carpets, and a color mixture for the rest of the cabin trying to resemble beige leather. I have also detailed the car radio, heating controls and clocks. The steering wheel and gearstick was painted with matt black acrylic paint. The entire interior was painted by hand. The result is not what I exactly wanted (I am very fussy) but I like it as is.
This was the result of working in the interior of the scale model: 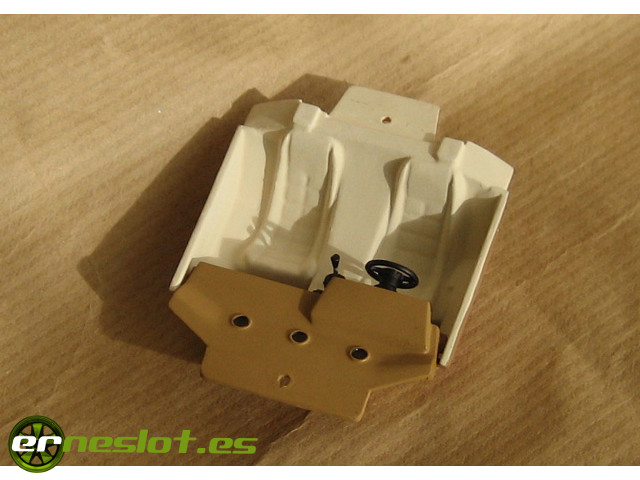 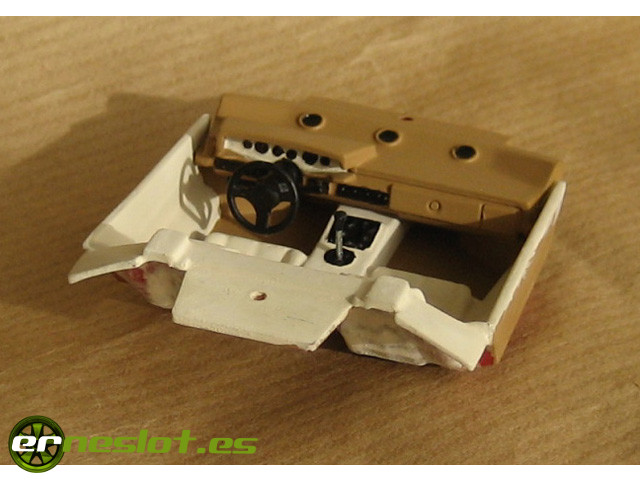 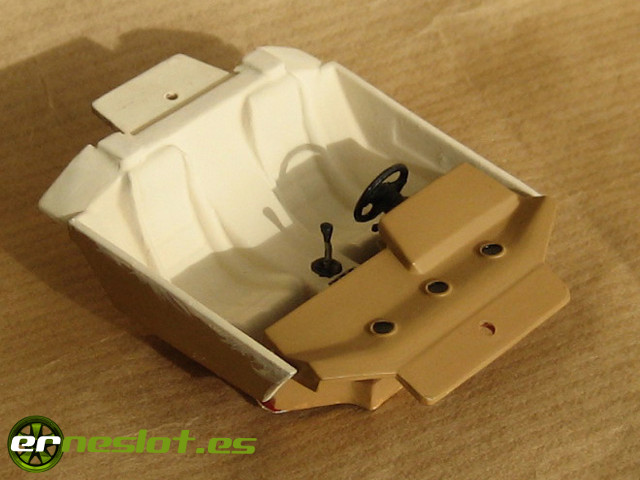 In the glasses I only had to do was to drawn the gums with black indelible marker: 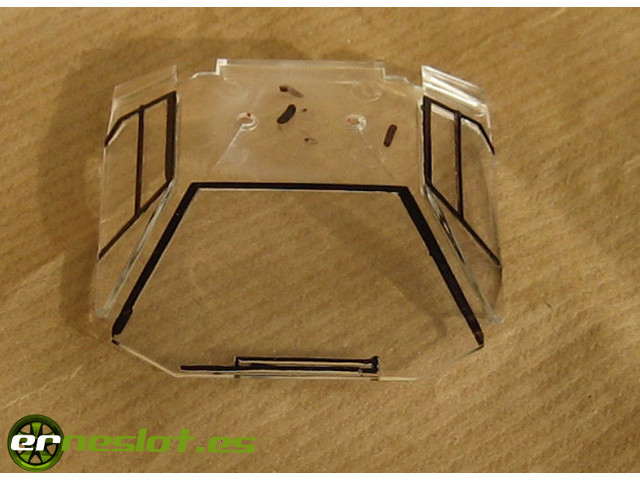 After fight a lot with the airbrush and the Tamiya acrylic paint I got a acceptable finish. Here are some photos of the result of painting the bodyshell, without painting details like headlights or air intakes. 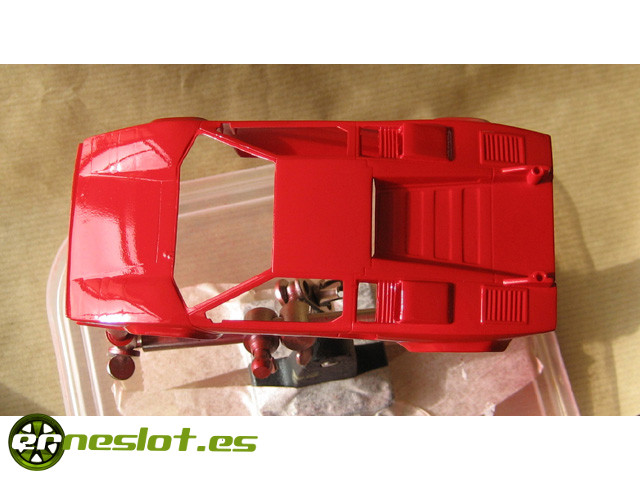 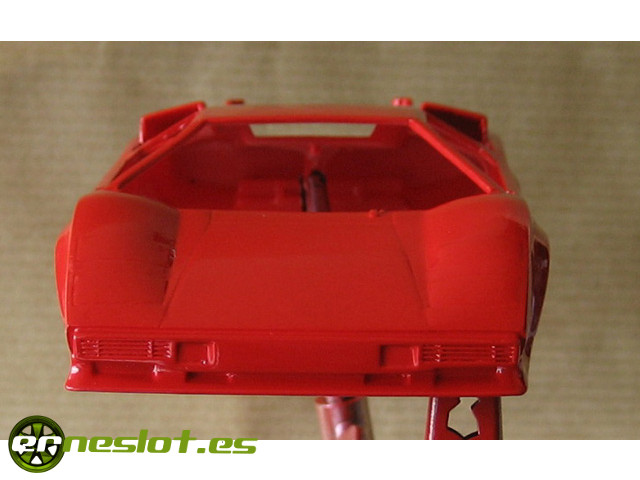 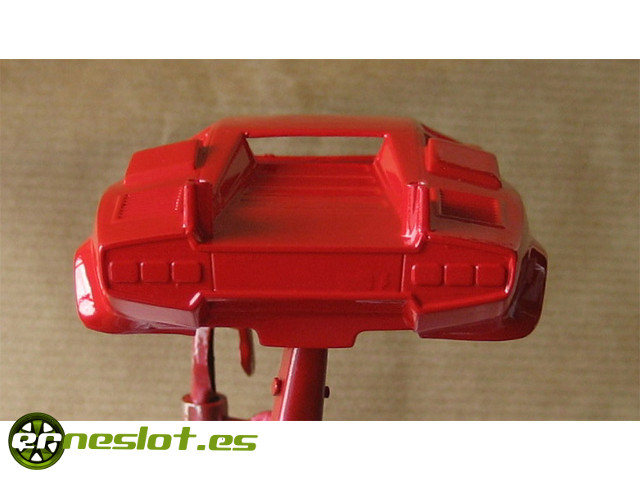 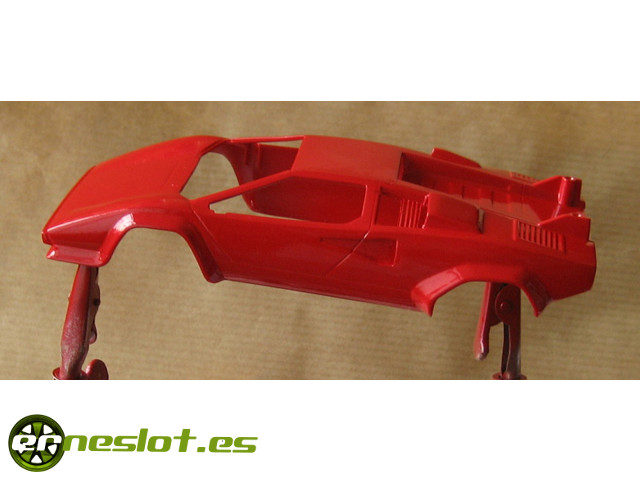 The color used to paint the chassis was matte black Tamiya enamel (XF-1) and the truth is that I liked a lot, applies phenomenal and cover even better, without problems but as a handicap say we must clean the airbrush with solvents and other... Once the body painte I applied Tamiya spray varnish who bothers me a bit because left the chassis a brilliant finish instead of matte. So you know, if you want to keep the matte shades never use gloss varnish to paint them. 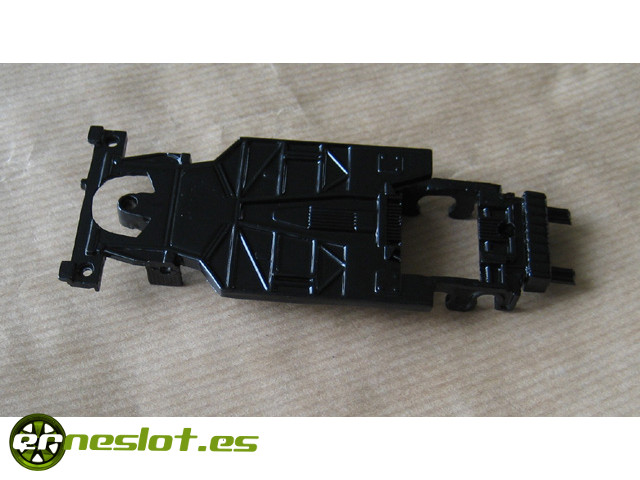 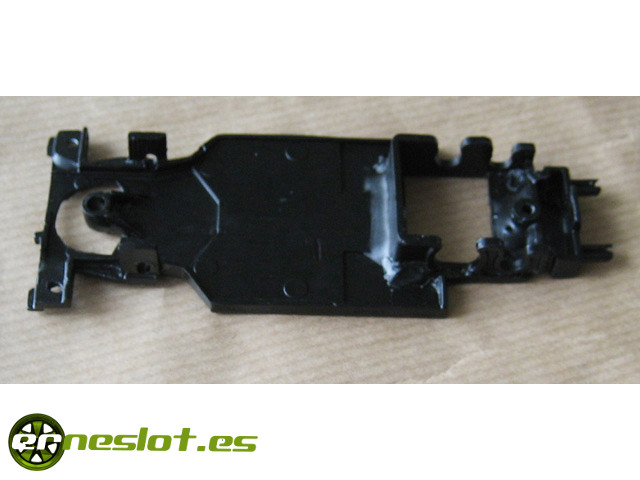 Then I complete and fully assembled the chassis. I tried to shoot it in my house and worked quite well, no strange behaviour or off-track excursions. Mechanically the car is very simple, engine and rear axle are from Superslot and front axle was a was fairly straight Scalextric one, as it is enough for a home use. 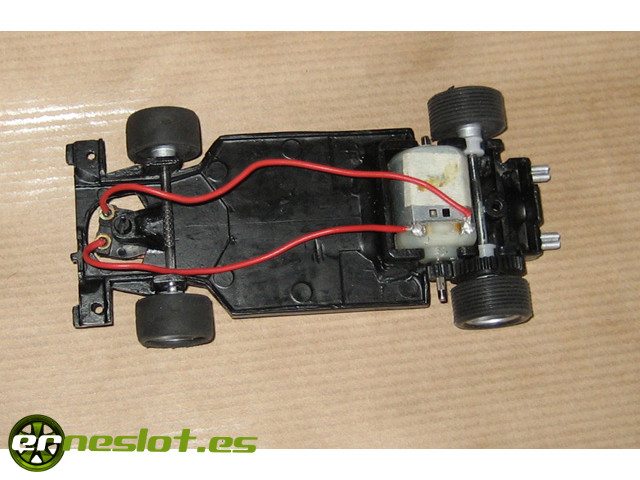 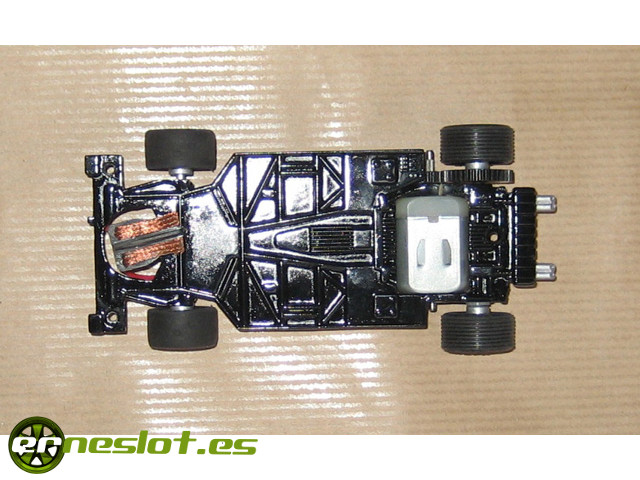 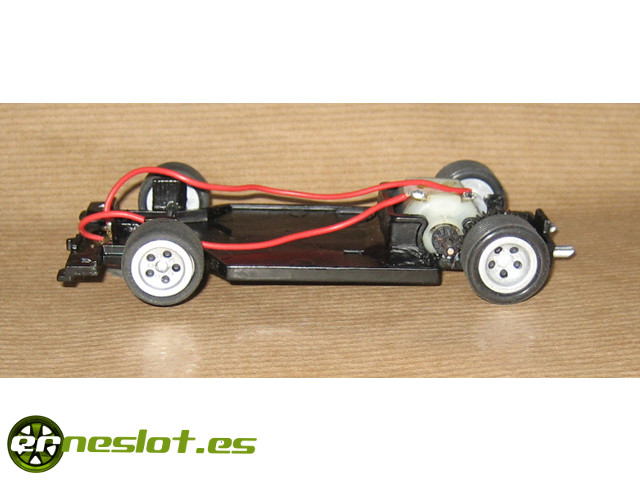 The painting process of the car was an odyssey. At first I painted with Tamiya X-7 red acrylic paint, which dissolved in alcohol gives a nice sheen. After several attempts with the airbrush and more coats of waterproof sandpaper did not get completely eliminate the "orange peel" effect on the surface of the car. Anyway I was very satisfied with the outcome. The problem came when applied the varnish (Duplicolor bilayer), which is so aggressive that ruined the paint. Forget him completely and the car turned to painting, this time with the same tone but with enamel, and again the varnish messed up the job. The third and final time I returned to painting the body with acrylic paint because I prefer the shade of color, more bright and beautiful than with the enamel. But I must recognize that the enamel is applied more easily and leaves a finer finish.
I also painted the details with acrylics also. The masking of air inlets and outlets was made with a clear tape from 3M, is phenomenal, fits quite well to the shape of the body and leaves no traces of glue, was a discovery since I use... To finalize three coats of wax varnish "Bosque Verde". The third principle on hand but after past experiences I did not trust. I don´t goint to put the car on track, at most a shot turn in my circuit, so I do not care if the varnish isn´t the hardest one. The outcome of the finished car and mounted is this:

Finally, comment that the mirrors are from a Altaya Ferrari 333 adapted because the model kit ones doesn´t look at all to the original car mirrors. 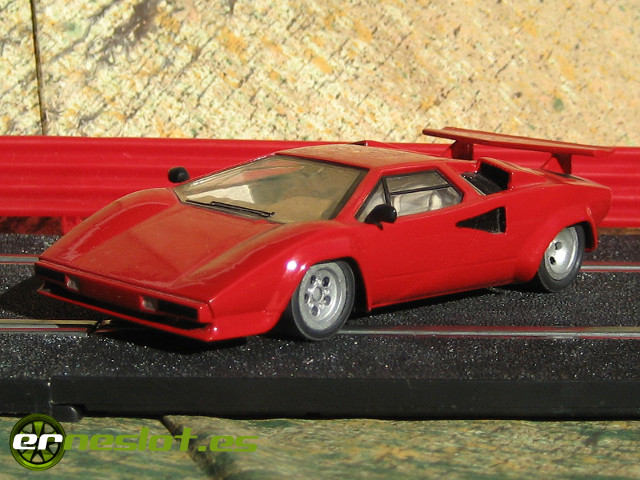 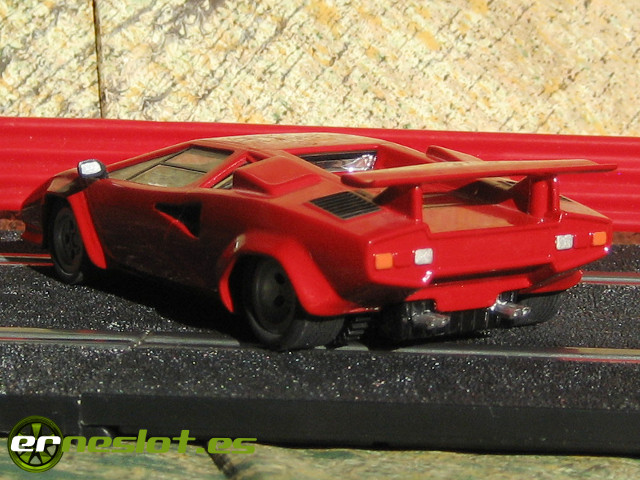 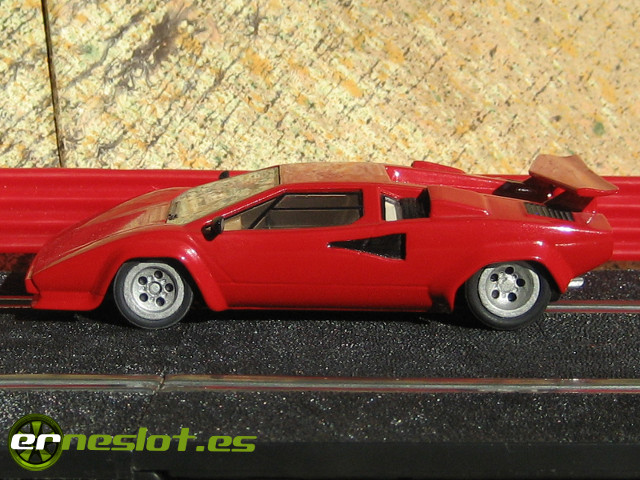 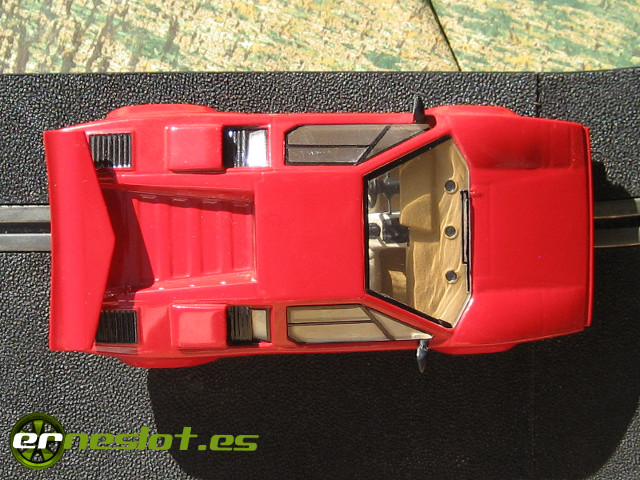 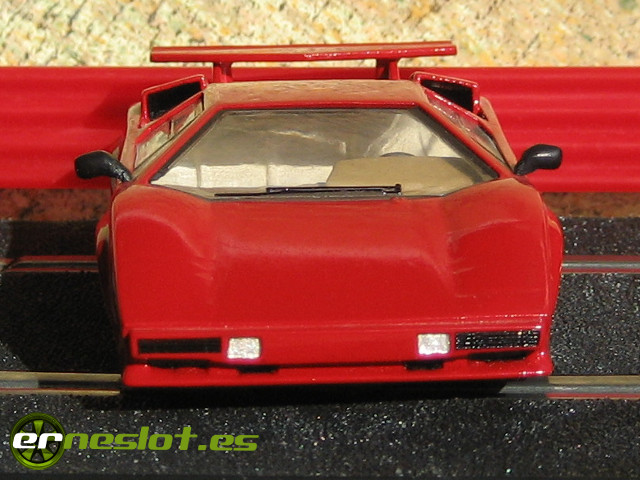 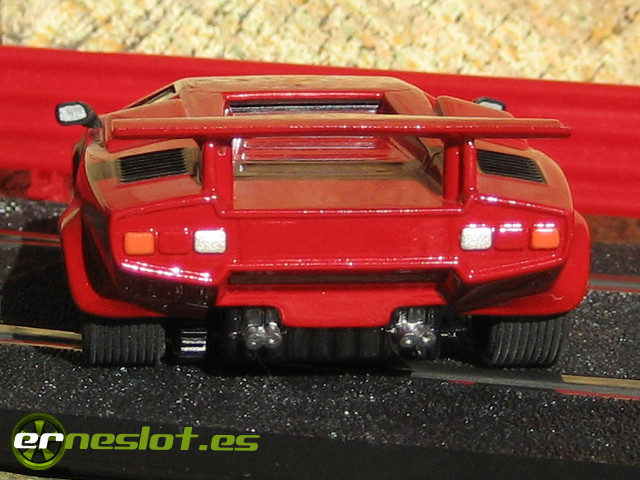 This concludes the adaptation of a model to slot in this case simple. Although it took a little over a year to finish it, I admit I learned a lot with this model, especially to lost my fear to the airbrush, the masked, to destroy a work by being careless ... It was a phenomenal school, and I am also very happy with the result.