Some time ago I decorated a Slot.it Sauber C9 white kit based on the livery of the Porsche 917 entered in the 24 hours of Daytona of 1971, decoration that you can see in this link. That was the second time I decorated the car with the same livery, the first time was not well finished because the varnish (Vallejo glossy acrylic spray) damaged the decals slightly, which were slightly blurred and raised, so to reedem myself I decorated another car again, and this time the slot car was to my liking.

I had saved the first, but as it is a model that I like a lot I decided to make another decoration. The first thing I did was to dismantle the body and remove the paint again. 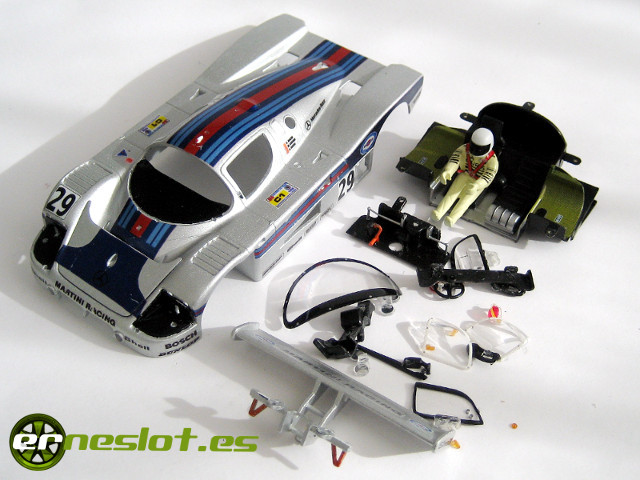 The disassembly of some parts was complicated because they were stuck with cyanoacrylate, which took a little time, but with the help of an electric welder and a cutter I got the body completely unbuilt. As it was painted with Tamiya acrylic paint, to remove it I had to submerge the body in 96° alcohol for about 30 minutes and rub a little with a toothbrush. At some points I used a piece of sandpaper to remove some glue, but it only were in occasional cases. This way the body was completely clean.

For the new decoration I decided to do the Alan Mann Racing team cars livery. The Alan Mann British team was founded in 1964 by Alan Mann himself and ran as an official Ford team between 1964 and 1969. The decoration of his cars was very nice, for my taste, basically red cars with golden colored stripes and sometimes white stripes. The following image, extracted from ultimatecarpage shows a Ford GT40 with such livery. 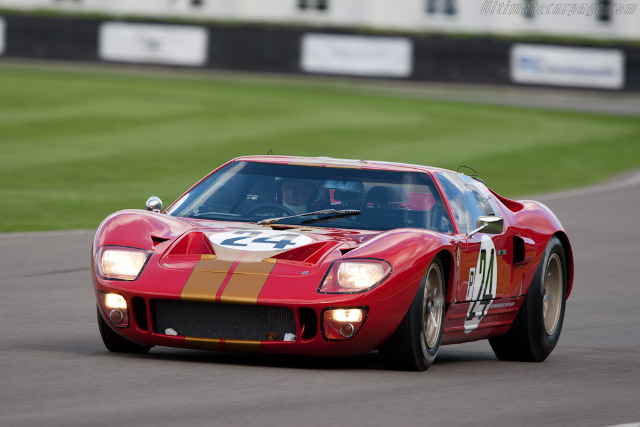 Who wants to extend information of the team can visit its official website.

I love that decor, the combination of the red color with the gold stripes and the black numbers seems very beautiful and colorful to me, so I proposed to make an interpretation of the same on the Sauber that had disassembled. The first step, after stripping the car completely applied to the body a coat of primer. I chose Vallejo´s white spray primer and honestly, I did not like the result, it left an excessively thick coat so I had to polish some parts, without getting a perfect result. After the primer coating and subsequent sanding and polishing, I applied the gold color (Tamiya acrylic X-12 reference) with the airbrush. 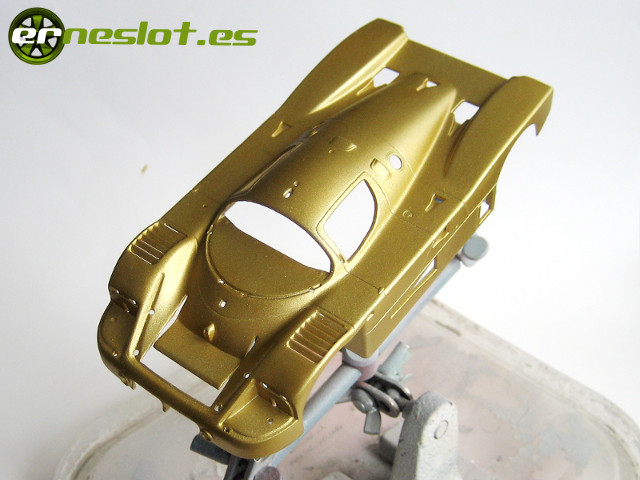 With the golden paint well dry, I pasted two strips of 10 mm wide Tamiya masking tape along the car... 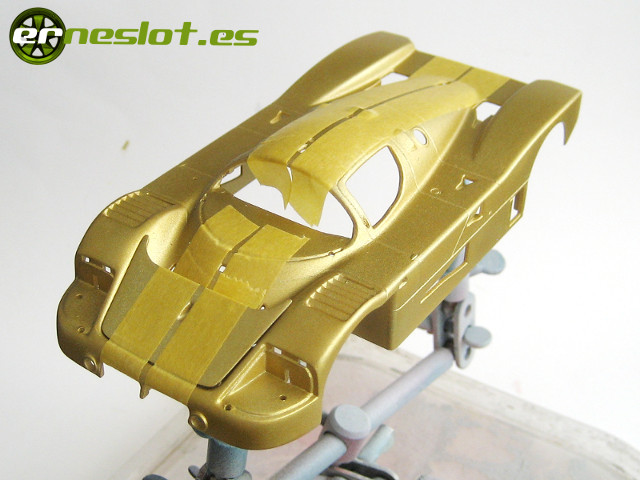 ... and painted the complete body with Tamiya´s acrylic red color with the airbrush. When I finished painting it and without waiting for the paint to dry, I removed the tape carefully. When we masked parts of the car with tape and then apply the paint, we must remove the tape as soon as possible and always that the paint is soft so that the cut is the best possible. If we wait too long, and the paint is too dry, removing the tape will remove some of the paint, red in this case, and the cut of the stripe will not be straight, but will have the shape of a sawtooth. In this case, after remove the masking tape the body was thus: 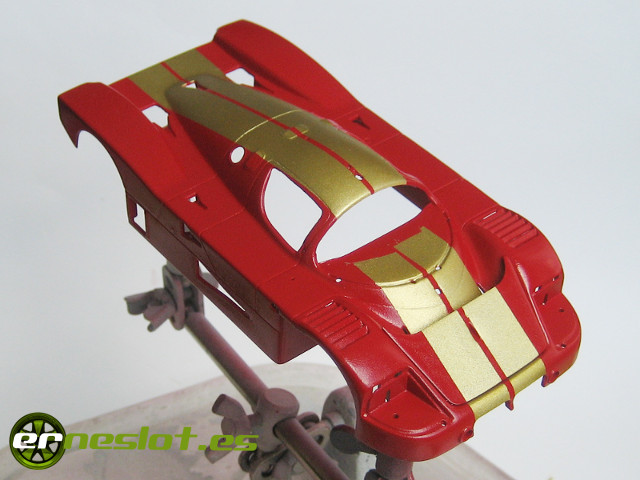 Then I painted the rest of the details of the bodywork, dashboard and the bottom of the headlights, with Vallejo acrylic black paint. After letting the paint dry completely, I placed the decals to finish the decoration. Some of the decals used were of own manufacture and another part, the white "Castrol" letters, of a set of comercial decals, that after placing them they were like this: 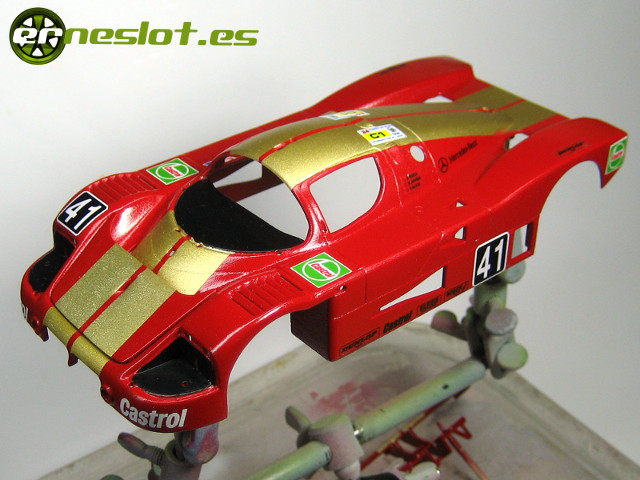 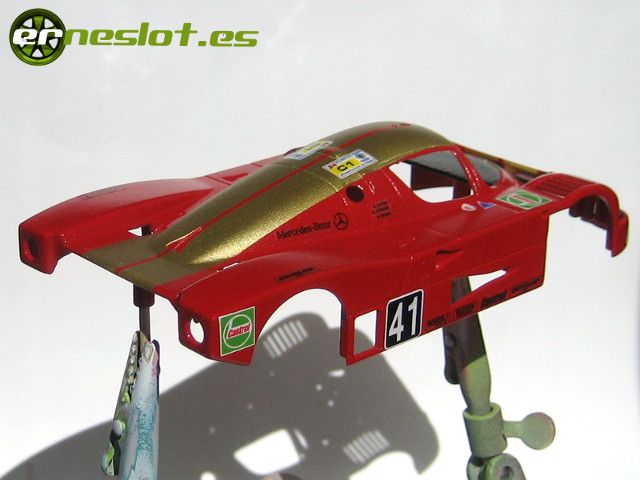 With the decals completely dry, I applied a coat of automotive varnish to the body to protect the decoration. 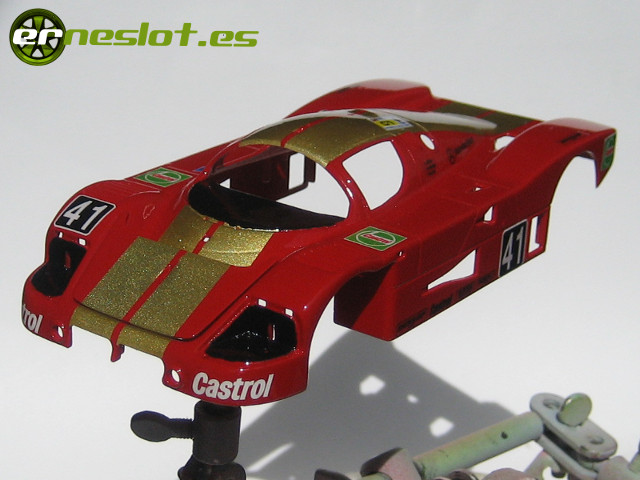 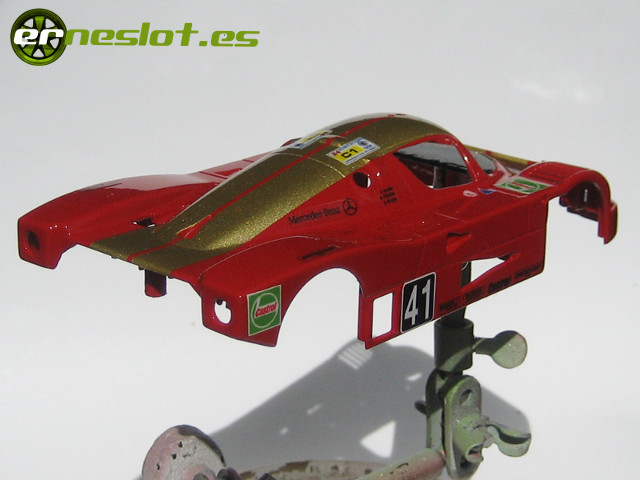 The same process as with the body followed with the two rear wings I had for this car. 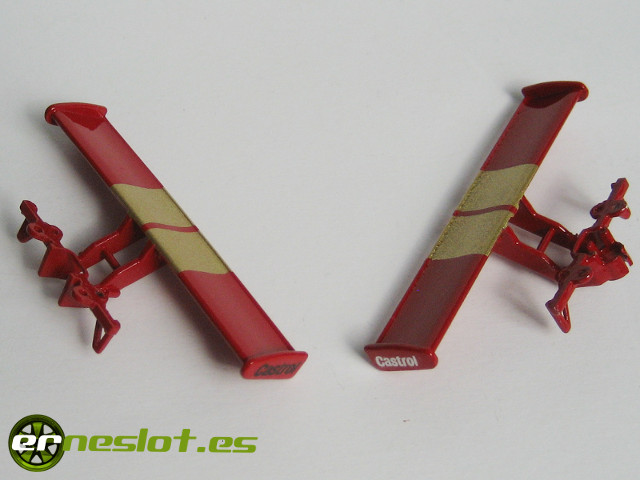 For the wheels, I used the same procedure as I have done for other times, such as for the Slot Racing Company Porsche 907 wheels, I painted the interior of the rims with black enamel and adapted a polyurethane resin insert also painted with black glossy Humbrol enamel. 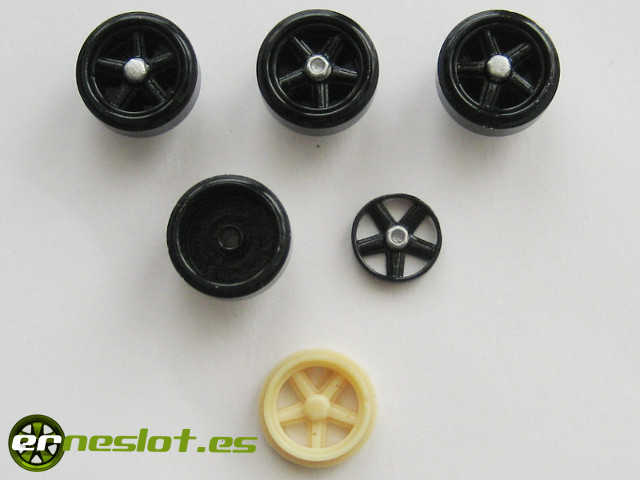 After a few days, the varnish was very dry and proceeded to assemble the rest of the body components. Being pieces I was going to mount for the second time, in some cases they did not fit as well as I would have liked. For example, had to stick the tulips of the headlights with cyanoacrylate, and the right side one was a bit veiled, In the photos you can see. And also one of the side indicators was unusable and I could not hit it, but in general, I managed to leave all the pieces correctly in place, although with more difficulty than when I mounted the mint new body.

Finally, the chassis fitted with the calibrated Slot.it spare parts. 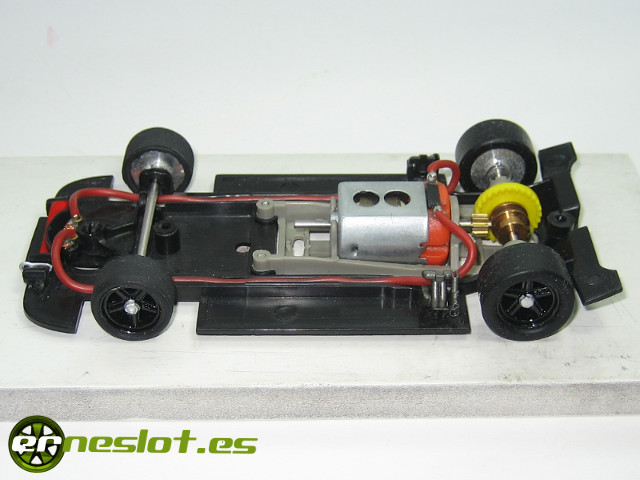 And with the chassis attached to the body the slot car looked like this: 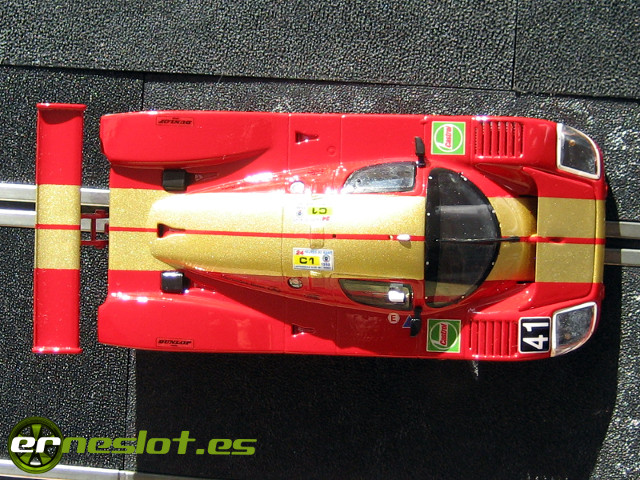 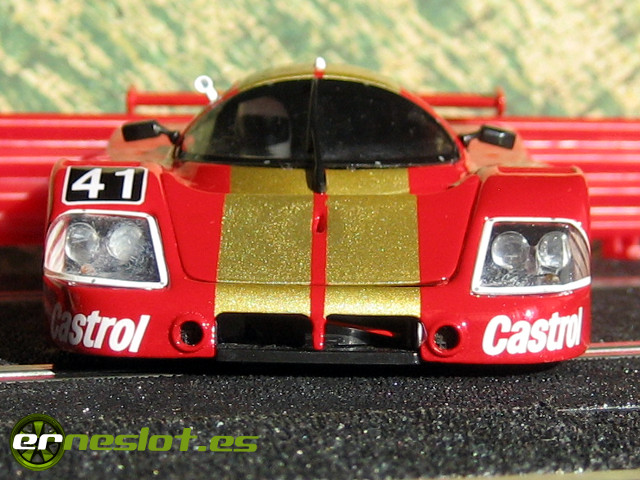 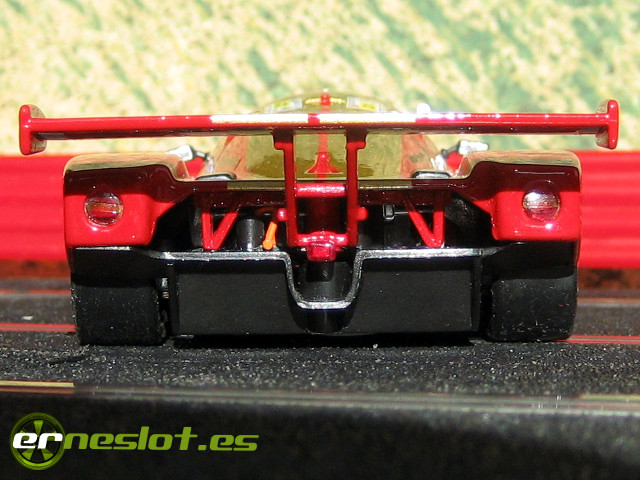 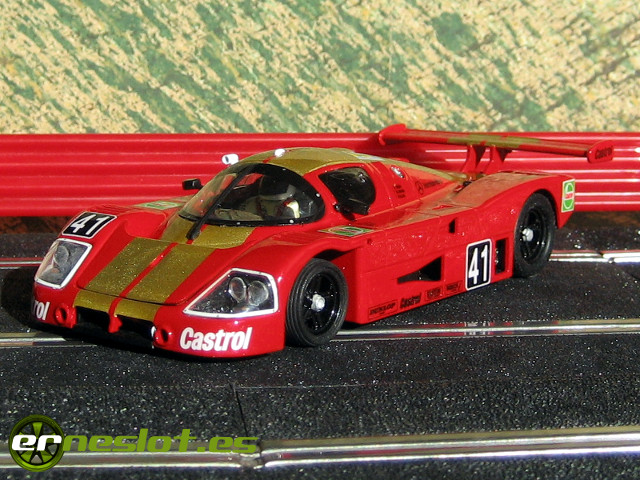 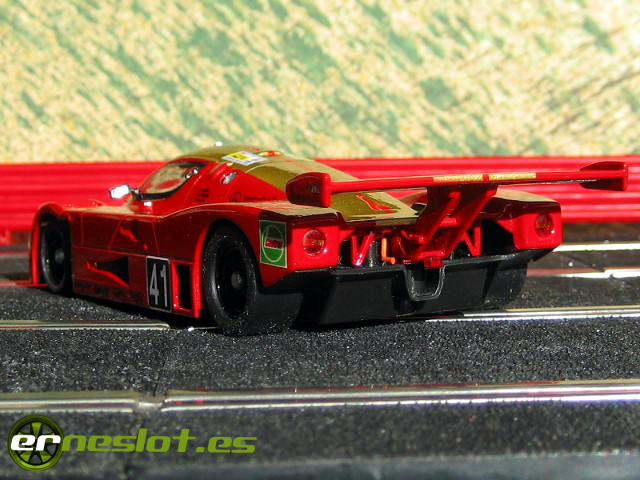 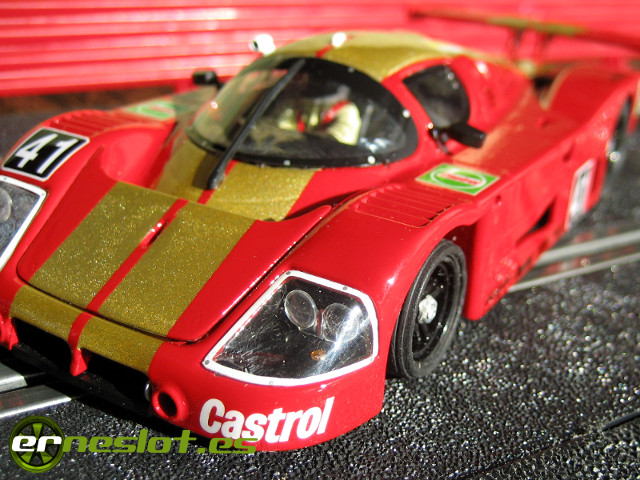 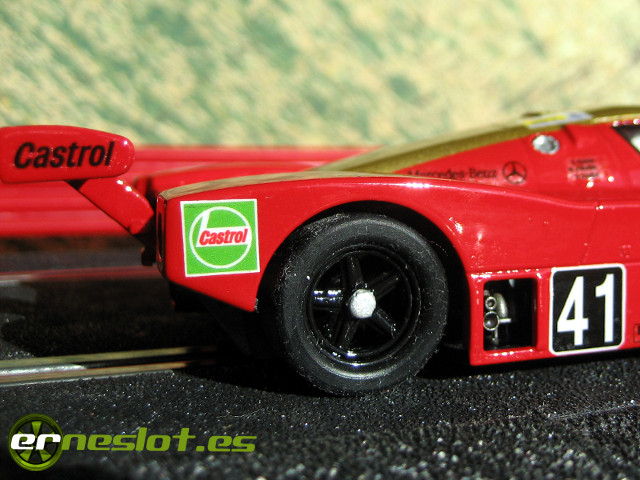 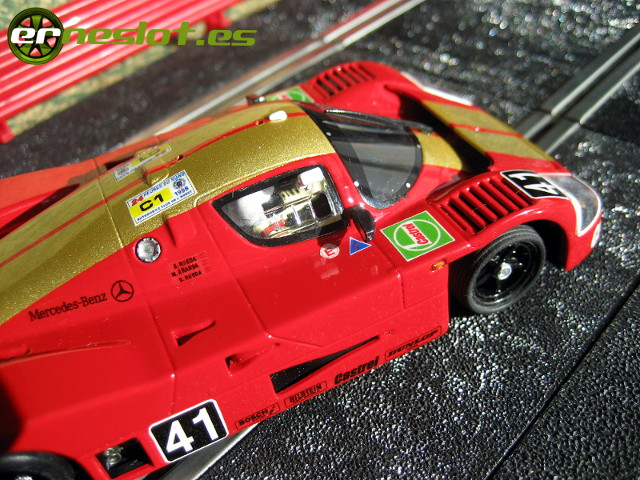 Undoubtedly there are mythical decorations that look good in any car (Martini, Gulf ...), and this case is no different. When I decided to make this decoration I knew that the car was going to look nice, among other things because the car is nice in itself, but once finished I can say that the result is spectacular, the combination of the red and gold colors with some details in black, as the wheels, feel perfectly to this and other models. For sure, this will not be the last car I would decorate this way. I like the decoration so much that I can even overlook the small flaws of this particular model.